Whoa: We’ve Been on the Road Six Months

Time flies.  It absolutely soars when we’re actively doing something, and it painfully crawls while we uncomfortably sit on an overnight bus.  These last six months have been some of the craziest months of our lives, and our sense and perception of time has been completely scrambled.  For example, six days with a remote village in Vanuatu felt like three weeks, while four days in Tokyo felt like 24 hours.  We ask each other the same question at least three times a week: “What day is it today?”.  Neither of us ever know.  Example conversation from last week:

Dan: “But is today Saturday or Sunday?”

The stats are not only fun to keep, but enjoyable to monitor and analyze.  Our biggest goal of the next six months will be to try to raise our Average Nights Per Bed to more like four nights.  Imagine packing up everything you own every two and a half days.  It is one of the few downsides from constant travel.

– I haven’t outgrown naps, I’ve just been deprived of them since Kindergarden.  I’m catching up though.

– The good news is that we can still stand each other after six months of seeing each other nearly every minute of the day.  We knew it would be a test, and although there are moments when tensions rise, we have done a good job of staying a team.  I think people would actually be surprised by how much time we spend apart.  We get stares from other people at hotels when I’m in one part of the lobby while Alissa is all the way across the room.  They think we just got in a blow out fight or something.  In reality, we try and simulate a normal day in any married couple by spending four or five hours away from each other during the workday.  Oh, and I let Alissa go to North Korea for a few minutes on her own.

– We knew that moving fast would cause us to get tired, and it has, although we have yet to feel any type of burn-out.  What we do feel is that we are leaving places before fully being able to see enough of it.  We are starting to think that when visiting a country, we will pick less cities to visit longer, instead of a lot of cities to visit a few days at a time.

– Wearing the same clothes every day is funny the first month.  After that, it’s just downright annoying.

– I have had the worst luck with shoes.  The bottoms of my Merrell running shoes came off after four months, my Nike replacement shoes lasted two weeks before there was a rip in each one, and my fake Air Jordan’s in Vietnam only lasted three hours.  Does anyone have a recommendation on a durable, light-weight shoe that can be both a running shoe and a hiking shoe?

– Our online business and travel blog sponsorships have been doing really well, and has grown every month.  Starting in May, we crossed into the black and now make more money than we spend each month.  I wonder if that means we can officially call ourselves “professional” travel bloggers now?  Probably not.

What foreigners think of America:

One of things I’ve never had an opportunity to do in my life is hear real feedback from foreigners about what they perceive life in America to be.  I always knew the world’s perceptions of America was shaped by TV/Movies/Music, but I never knew just how bad it was.  Here are some examples of things we’ve heard from normal, smart, educated people when I ask them what they THINK it’s like living in the United States:

The problem with TV news only reporting negative stories

A young Russian couple (one we became good friends with and really liked!) was trying to determine whether to move to Australia or the United States.  The husband wanted to move to the U.S., but the wife wanted Australia because of the bullying stories and gun control stories she has seen on TV.  She doesn’t want to send her children to a school just to get bullied, and is afraid to live in a country where “everyone has guns.”  Look, I get it that bullying is an issue, but I think it’s interesting that a citizen from a country where being gay is illegal thinks the schools in the U.S. are just not safe for kids.   I asked her if she felt safe in Russia.  She said yes.   I then showed her on Wikipedia that the murder rate in Russia is two times higher than the U.S.

The world now associates the Southern United States based on the television shows: Hillbilly Handfishin’ and Duck Dynasty.  Questions about these shows, and how real they are, have come up at least five times in five different countries.  We have also met more than one person who wants to visit rural Texas to see right-wing crazy Americans, as if there is some kind of tour you can take.

On more than one occasion, someone has expressed their interest coming to America and visiting “Abandoned Detroit.”  That is what they called it.  Apparently the belief abroad is that Detroit doesn’t even have living residents anymore.  That the city was abandoned and it is now a ghost town for adventure tourists.  I told them it was a great idea, and that they should fly into Toledo, and drive to Detroit, since the Detroit airport is of course abandoned.

Without a doubt, the biggest thing people bring up to us is GUNS.  The assumption in the world is that every single adult in the United States owns a gun, they carry them around everywhere, and when they get in an argument they use them.  A few people who have plans on moving to the United States asked me what the process is for them getting a gun once they arrive.  Do they just buy one from Wal-Mart?  One couple who CouchSurfed through the United States told me that they always send the female to the house door, just in case it’s the wrong house, they assumed the owner of the house would be less likely to shoot a woman.  There is also an overwhelming “What is wrong with your country” when it comes to this issue.  We haven’t met one foreigner who thinks the Second Amendment is a good idea.  Regardless of what you think of the issue, the 2nd Amendment is one of the things that clearly makes America unique.  I make a point of it to try and never talk politics on this trip, and anytime issues like this come up, I usually just turn it into a joke and make fun of the issue.  I have met waaaaay too many travelers to know politics is never a good topic for casual conversations, especially if you just met the person. 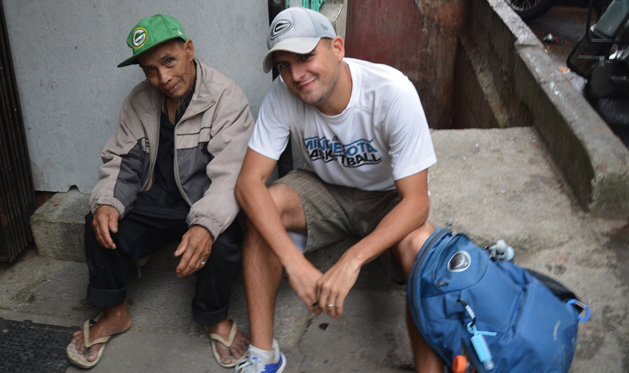 Here are some of my observations about the popularity of sports brands from the last six months, as this is something that interests me greatly. The NBA is the most popular American sport abroad, with the NFL and MLB being tied for second.  We’ve heard no mention of the NHL.

Most popular American teams, based on apparel sightings:

Here are the most popular teams overall:

1.  Minnesota Wild sweatshirt: ONE.  In Myanmar.  The guy wearing it had no idea who the Wild were.
2. Green Bay Packers: TWO jerseys, ONE hat.  None were fans, one told me “it’s just a shirt”.
3. Milwaukee Brewers jerseys: ONE.  A Chinese girl wearing a Craig Counsell jersey in Vietnam.
4. Minnesota Vikings apparel: ZERO.
5. Milwaukee Bucks hats: TWO and a Glenn Robinson jersey in Tokyo.

Here is the Facebook Album of pictures from the first six months of the trip:

4 Responses to Whoa: We’ve Been on the Road Six Months