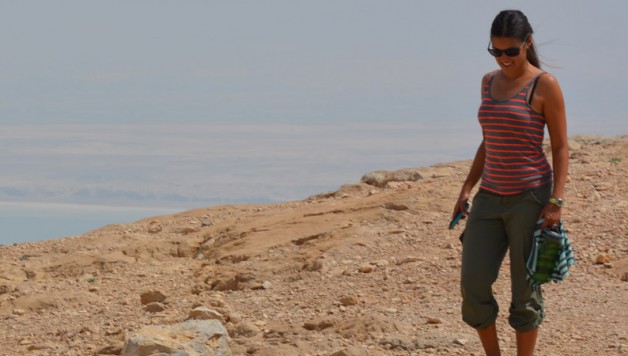 Israel is known as the holy land and its tourism industry is certainly centered around its holy sites for Christians, Jews, and Muslims. But we learned on our eight-day trip that there are some incredible historical sites that aren’t necessarily religious.  Here are three sites we visited during our tour that shows just how diverse the history in Israel really is: 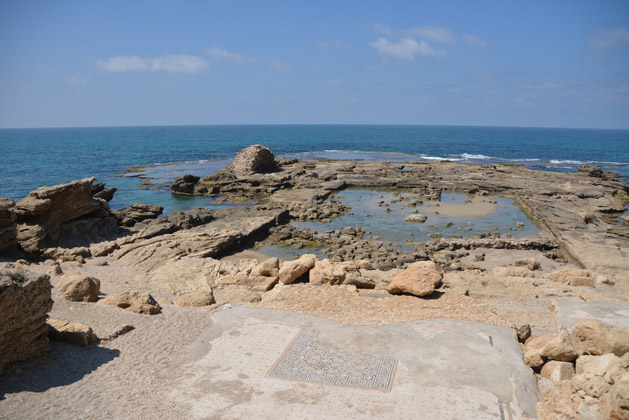 Outside of Tel Aviv, we stop at a former Roman town built by Herod the Great around 20 BC and named to honor the Roman Emperor Caesar.  Herod built a huge palace on the Mediterranean, homes, markets, bath houses, pagan temples, and surrounded everything with a city wall. A stadium was once used to host chariot races and gladiators fights, and even had public toilets. 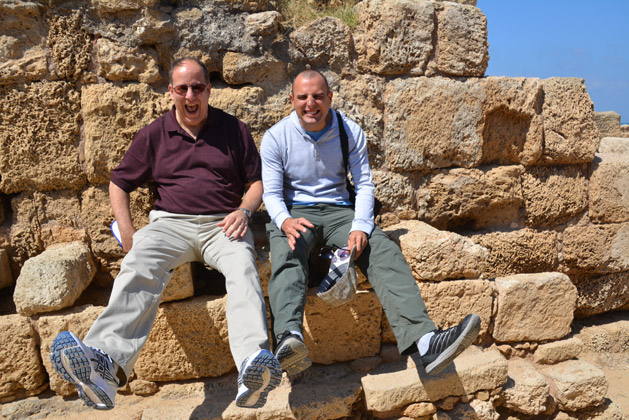 Dan and his dad using the ancient toilets.

An impressive 10 kilometer long aqueduct (later expanded) supplied the city with fresh water and was a major innovation at the time. 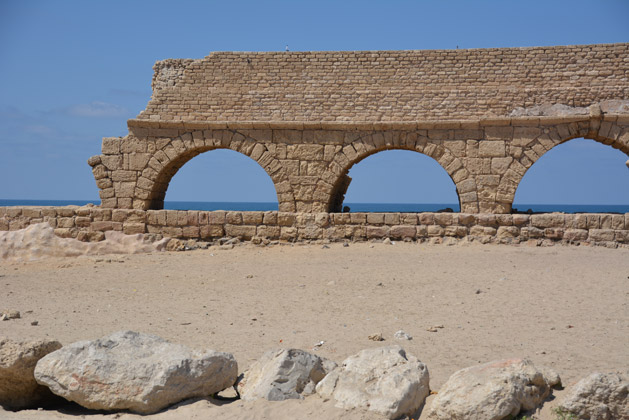 The aqueduct in Caesarea.

The most magnificent building then and even now is the Roman theater.  It’s been restored but has many original elements, including the marble floor and stage. It still host many concerts, and according to our guide, performing here is a a notable achievement for local artists, a sign that you’ve “made it”. 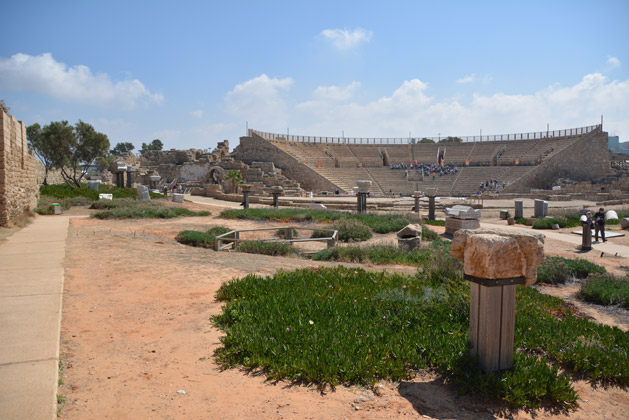 Caesarea’s Theater seen from a distance.

The ancient town of Beit She’an occupies a strategic location at the junction of the Jordan River Valley and the Jezreel Valley, and because of this location it was a thriving town as much as 6,000 years ago.  The ruins that can be seen today date back to the ancient Greek city built in the 3rd century BC and the ancient Roman city from 300-600 AD. 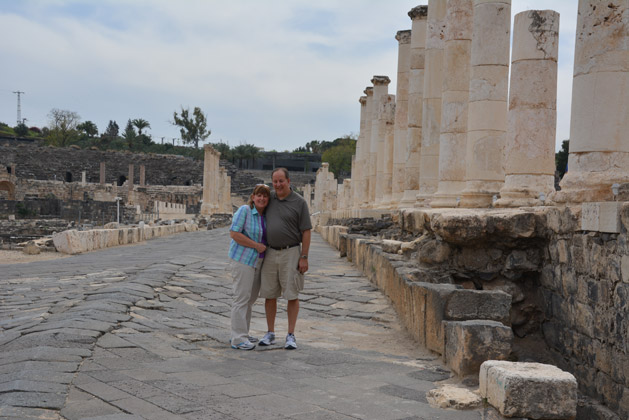 Dan’s parents on the main street of Beit She’an.

We learn about the construction, usage, and social significance of the Roman bathhouses. The amount of building remains are astounding – we tour not just where certain buildings used to be, but near-complete ancient buildings. Some of the columns have been restored to show what they would have looked like standing up, but the pieces are all there and orignal. We stroll down the Cardo, or main street, just like Roman civilians would have as they shopped or traveled to church or university (a Roman invention). 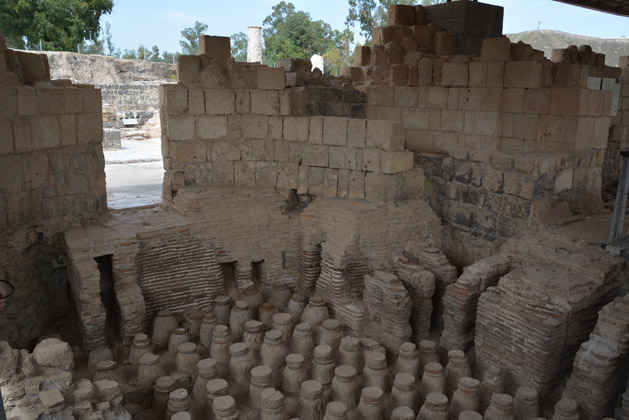 Ruins of an ancient Roman bathhouse.

The city was destroyed by an earthquake in 749 and was basically abandoned after that.  Nearby, civilization continued but the Roman city center remains were lost until archaeologists began to unearth them in the 1920s. 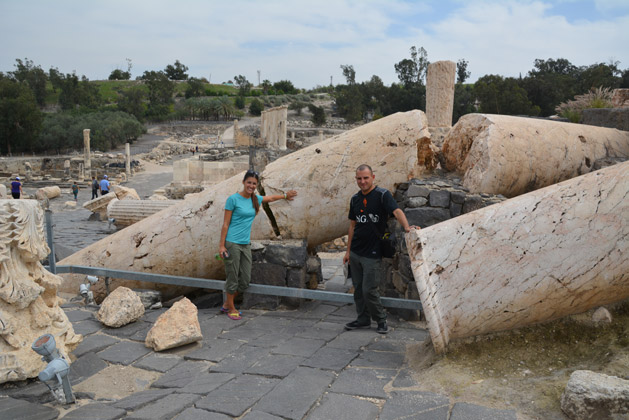 Ruins from the earthquake that destroyed the city.

Another feat of King Herod is the massive temple on Mount Masada, a plateau in southern Israel. 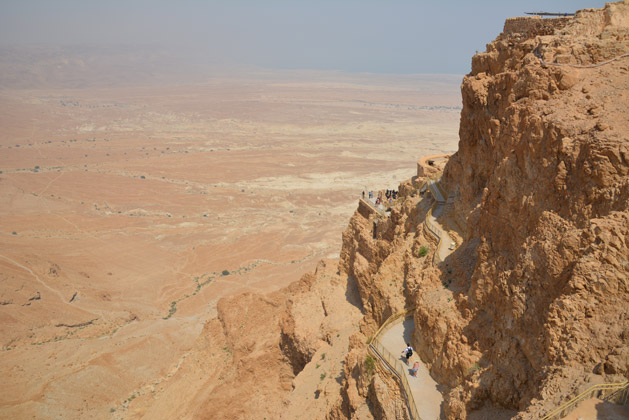 View from the top of Masada.

Masada was the setting of a Roman siege of Herod and the palace (and a 1981 television mini-series).  The Romans surrounded the mountain for nearly a year, gradually building a 114 meter assault ramp of natural bedrock that eventually allowed them to break down the walls with a battering ram.  The final blow was delivered when the Romans figured out how to re-route the flow of rain water through the complex aqueduct system, cutting off the drinking water for the Jewish residents. 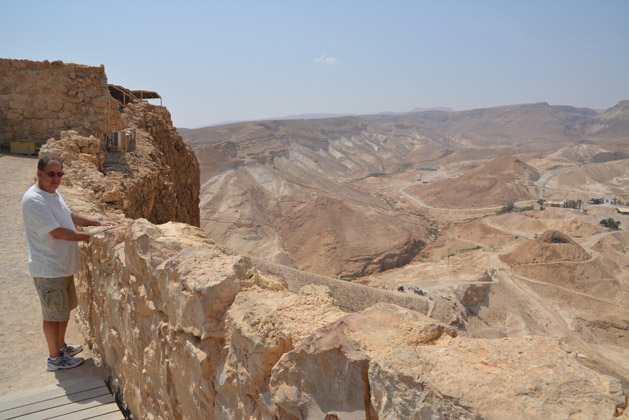 Dan’s dad at the top of Masada. The ramp built by the Romans can be seen in the background in the middle of the photo.

When the Romans finally won the power-struggle and entered the fortress, they found that the inhabitants had set fire to the store rooms and killed each other in a mass suicide, rather than being captured.  There’s a famous story about the last ten Jews left, likely high-ranking officers: suicide is not favorable in the eyes of god, so they drew titles to see who would be the last to die after they killed each other.  The one who was chosen made the ultimate sacrifice of not going to heaven.  The tiles used for this last act were discovered during the excavation of of ruins, and are on display in a nearby museum. 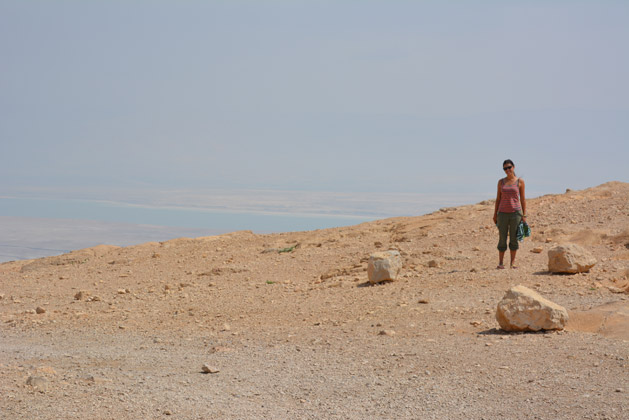 The visit to Masada is well-organized and informative. A short video explains the history of the site, and the drama that unfolded that makes it a perfect story for Hollywood. The trek up the mountain is well paved stairs, but the cable car option is much more attractive to us. On the mountain, the incredible views make it clear why Masada was such a treasured spot for Herod and desirable spot for his enemies. Huge cliff-side palaces, bathhouses, food and water storage, and living quarters for a small town are in remarkablely good shape. 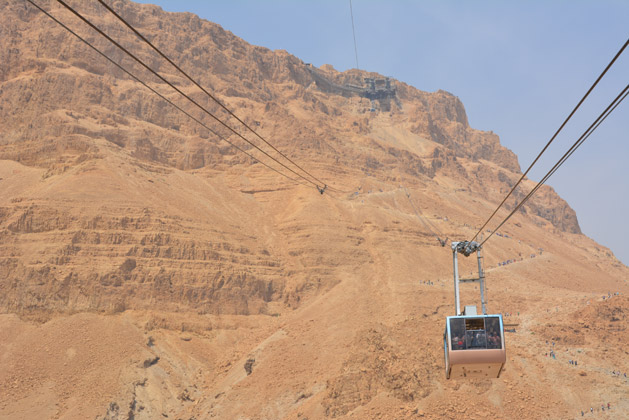 The cable car to the top.