Touring Jerusalem’s Holy Sites and Walking the Via Dolorosa 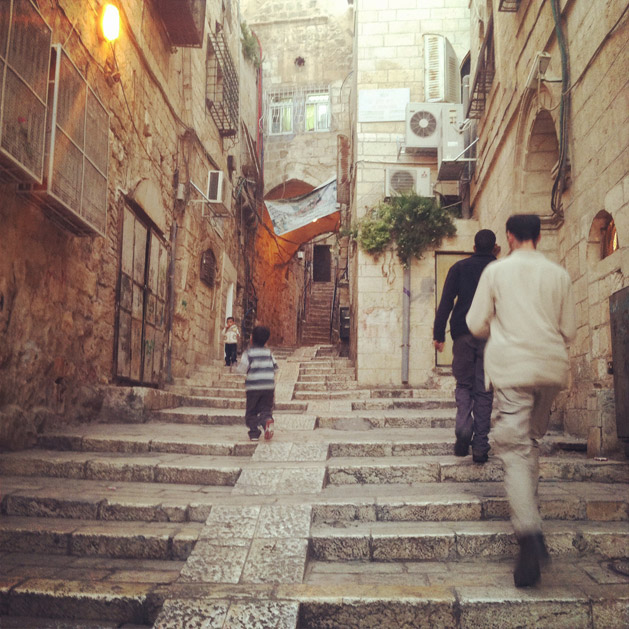 After four days of touring the northern parts of Israel and the West Bank, we have finally made it to Jerusalem’s Old City.  So much of Israel is modern and reminds of being home in the United States, which makes our first steps into the Old City feel like the real beginning of our Holy Land tour.  We walk on crowded, narrow streets lined with markets, that wind left, right, up, and down as we pass under countless archways and tunnels.  This is what we pictured when we thought of what the Holy Land would look like.  Although this city has been built, destroyed, and rebuilt many times, it still feels ancient and untouched. 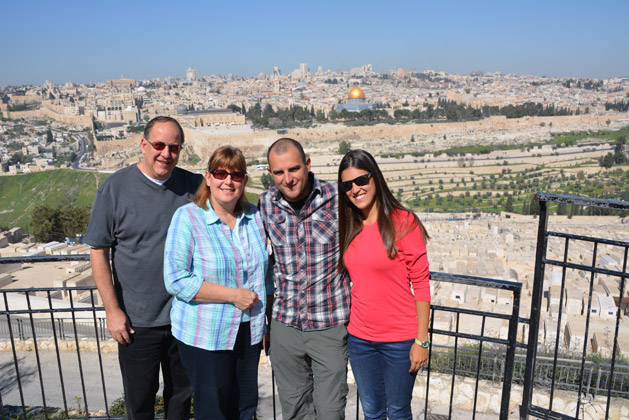 Our first view of the Old City of Jerusalem.

We made a brief stop this morning at the Israel Museum to see the Dead Sea Scrolls and to admire a large replica model of the entire Old City as it would have looked 2,000 years ago.  I think this model is a must-see for anyone visiting Jerusalem.  The model’s scale is 50:1, so it really is the best way to get a birdseye view of what Jerusalem must have looked like in those days, including what the Temple Mound looked like with the Second Temple still intact.  In the photo below you can see the model of what the Second Temple looked like.  That spot is now where the Dome of the Rock now sits (the gold dome in the photo above). 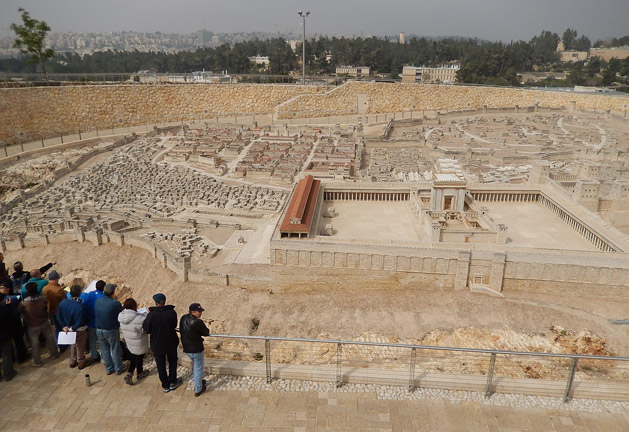 Model of Jerusalem in 66 AD.

The Garden of Gethsemane and Church of All Nations 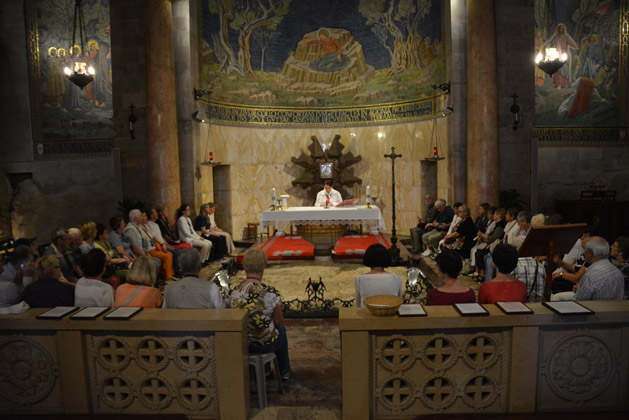 Service being held around the Rock of Agony. 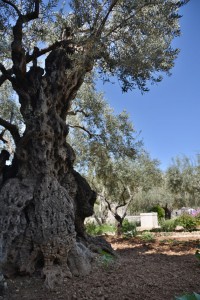 This is one of my favorite churches in Israel, and I especially like the dark blue paintings that cover the walls and ceiling.

The garden itself is also quite spectacular.  There are many olive trees covering the area and some of the trees have been carbon-dated to be over 900 years old.  What I thought was even more interesting is that DNA testing has found that all three of the oldest trees have come from the same parent tree.  Meaning these trees are direct descendants of olive trees that probably stood here when Jesus prayed here.

The photo on the right is of the oldest olive tree in the garden.  You can click it for a bigger version.

Walking the Via Dolorosa

A pilgrimage to Jerusalem isn’t complete without walking what is known as the Via Dolorosa.  “Via Dolorosa” is Latin for “Way of Grief” and is the path that Christians hold as the traditional path Jesus walked with the cross from his sentencing to his crucifixion.  The actual path Jesus took is disputed by archaeologists and historians, but the path as it is today is still considered the most traditional way to experience the walk.  Because of the 2,000 years of reconstruction in Jerusalem, the actual streets Jesus would have walked on are about 10-15 feet below the street where we stand today.  In one area, about 10 stones have been dug up from the original street below, but for the most part this famous pilgrimage walk is all about symbolism rather than retracing exact steps. 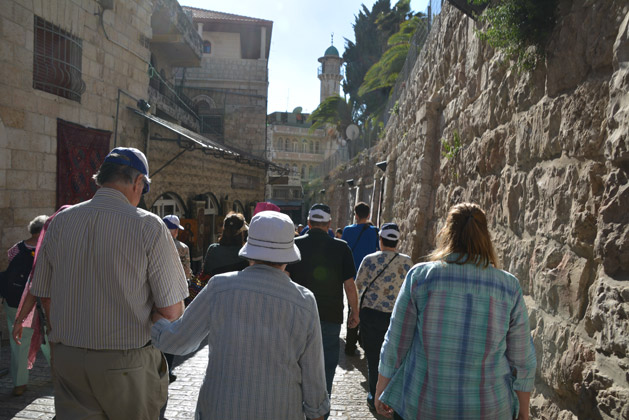 Walking the Via Dolorosa. 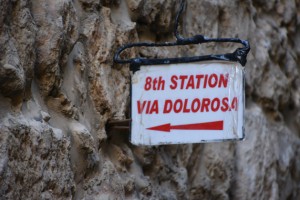 Today, the Via Dolosora is marked by 14 Stations of the Cross that each symbolize an event that took place that day.  The first stage is located at The Church of the Condemnation and is where Jesus was condemned to death then beaten.  Recent findings have shown that this probably isn’t the spot where Jesus was sentenced, but instead it would have occurred on the opposite side of the Old City near the Tower of David.

The other stations along the way include where he saw his mother, as well as places where he fell or interacted with spectators. Our group stops at each of the remaining Stations of the Cross until we reach the Church of the Holy Sepulchre.  The last five stations are actually located inside the church itself.

The Church of the Holy Sepulchre

This church is considered to be one the holiest site in Christianity and is the home of six different religious orders (mainly Orthodox and Catholic, no Protestants).  The six orders haven’t always got along, and currently operate under a status quo agreement from 1853 in which nothing can be changed, fixed, or modified in the church unless all six agree on it.  This has had a few interesting effects on the church.  There are big issues like critical repairs being delayed, but also petty issues like the infamous “Immovable Ladder”.  Sometime prior to the 1853 agreement, someone put a wood ladder outside one of the windows of the church.  The ladder can’t be moved unless all six orders can agree on where to move it, and the ladder has remained in the same spot for over 250 years as an eye sore on the church.  There are even engravings and lithographs of the church that date back to the 1700s that show the ladder in this same same spot!  Today the ladder is now just a symbol of Christian division. Click here for a close-up photo of the ladder. 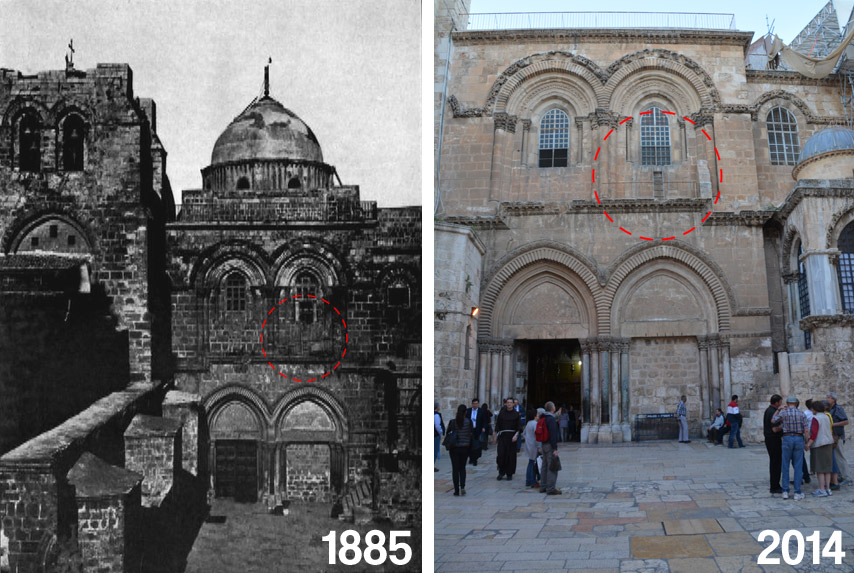 The courtyard of the Church of Holy Sepulchre with the Immovable Ladder circled.

The church’s doors are some of the oldest doors I’ve ever seen on a church and they really add to the mystique of this place.  Since none of the denominations are allowed to hold the keys to the church, the keys have been given to a Muslim family to hold.  The same Muslim family has been looking over these keys for hundreds of years.

Once inside, we come face to face with our first actual crowd of the day.  The Via Dolorosa had some points that felt a little crowded, but it is nothing compared to inside this church.  The church has crowds of tourists, priests, monks, nuns, and other religious people.  Every 15-20 minutes there seems to be some sort of ceremony being performed by one of the denominations at one of the holy sites within the church.  Here are the three main sites to see in this church:

1. Golgotha’s Rock – The rock where Jesus was crucified on top of.
1. The Stone of Anointing – Where Jesus’s body was laid and prepared for burial after being taken from the cross.
3. The Tomb – The site of Jesus’s tomb. 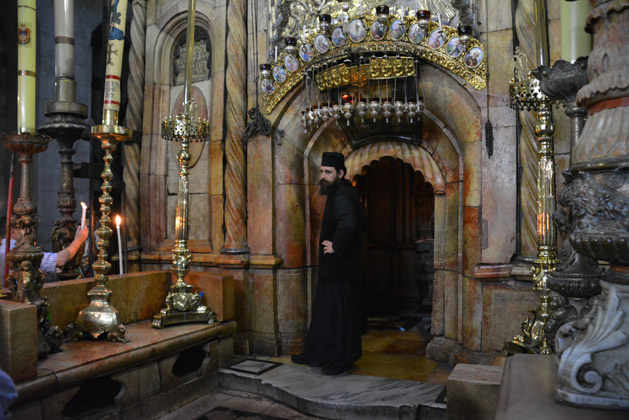 The church was basically built on top of a hill (aka Calvary) that was originally located outside of Jerusalem’s city walls.  In the fourth century, the hill was demolished almost completely in order to build the church.  The only part of the hill that was kept was the part surrounding the tomb and part of Golgotha’s Rock.  Here is a diagram from Wikipedia to show you the layout of the church: 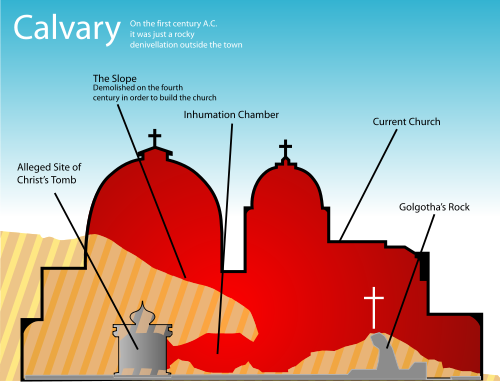 The line to visit both the site of the cross and the tomb are each over an hour long.  So we have decided to visit the site of the cross now, leave for a break, then come back in the evening to see the tomb.  To get to the top of Golgotha’s Rock, we have to climb a small stair case.  The staircase leads to a smaller chapel that has an altar for where Jesus was nailed to the cross and an altar over the exact spot they believe the cross was.  What I thought is cool is that the remains of the rock itself aren’t covered by stone, but by a glass altar.  This allows us to look right down onto the original rock that was here 2,000 years ago. 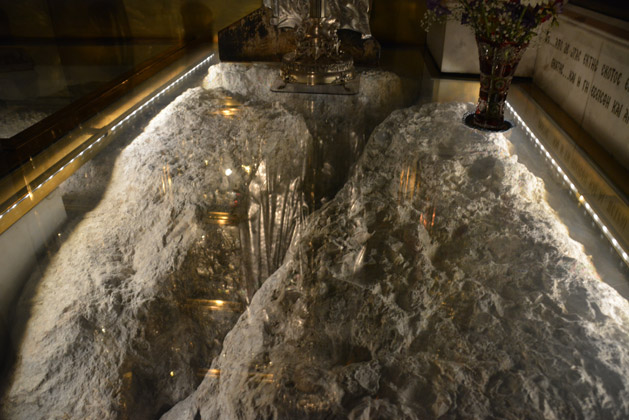 Golgotha’s Rock under the glass altar.

The line moves pretty slowly as people don’t seem to be in a hurry to view the site of the cross.  To be honest, I really can’t blame them.  Many of these people have waited their entire lives for a chance to visit this spot, and who wants to be rushed in a time of prayer and reflection?  Once we get to the front, we bend down and take a look below the altar.  There is a hole cut into the ground where I am able to stick my hand in and touch the rock: 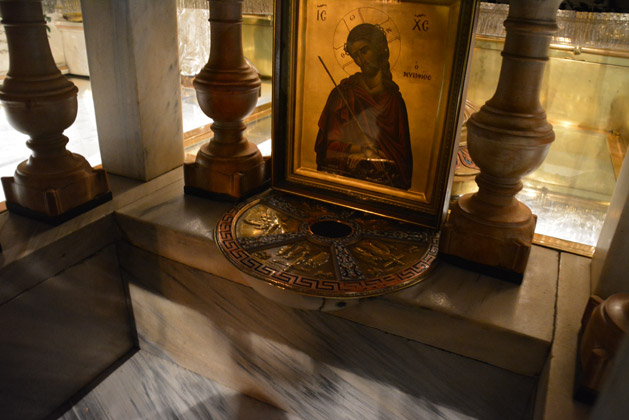 The place where the cross was raised, showing the hole for pilgrims to touch the rock.

After a break outside, we head back into the church and get into the line to see the tomb.  This line is longer than the line for Golgotha’s Rock, and it also seems to be less of a line and more of a free-for-all.  It’s too bad this church isn’t able to have more control over the crowds that come here, as even people on religious pilgrimages can be a little rude and impatient.  The line is an ultimate culture clash of Christian denominations from all over the world.  The group in front of us appear to be Baptists from the Southern US, while the group behind us seem to be of an Orthodox faith from somewhere in Eastern Europe.  The guy immediately behind me is from a religious sect that apparently requires you to get extremely close to the person in front of you while in lines.  I understand he really wants to see this site, but I just don’t see how continuously leaning on me will help him in that cause.  I eventually turn around and politely ask him to give me a couple of inches, but he doesn’t seem to understand what I’m asking and I eventually just accept the fact that for the next two hours I will be siamese twins with an old Serbian guy.

When we finally reach the front of the line, we hear one of the monks say that the tomb will be closing in five minutes.  We feel extremely lucky since we will be one of the last groups into the tomb, but at the same time, I notice the line still has hundreds of people in it.  Again, it is a shame they don’t control this better and cut the line off 30 minutes before closing so that they don’t have to send people away who have waited for over an hour.  I really feel for those people and can only hope that they have the ability to come back tomorrow.  It would be terrible if they came all this way to see this tomb, only to be turned away. 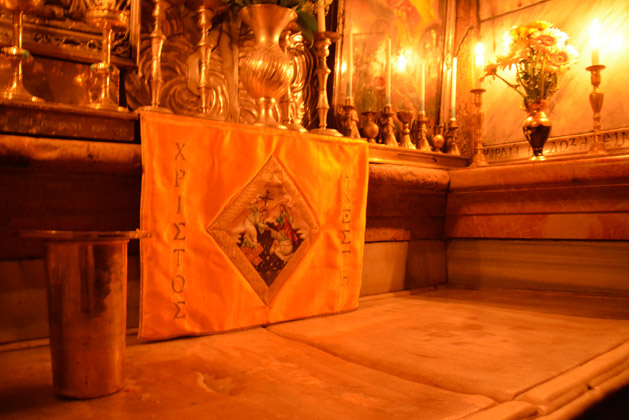 It ends up working out great for us as our group of four ends up getting a couple of minutes alone inside the tomb.  It is a great way to end a long day of site-seeing and walking.

Tomorrow we will be visiting a place called the Garden Tomb, which is the other site that claims to be a possible location of the crucifixion and resurrection.  Then, in the afternoon we have booked a tour of the Jerusalem Tunnels that will take us down to the original street level of the city during Jesus’s time.