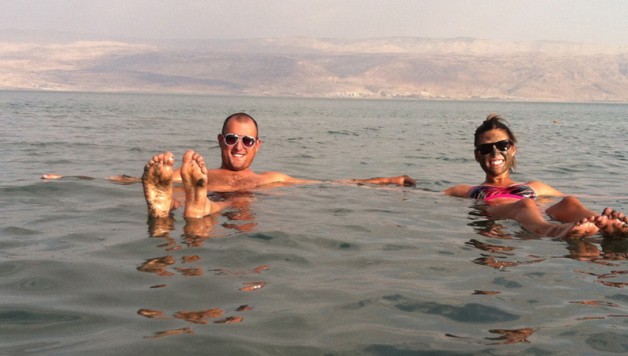 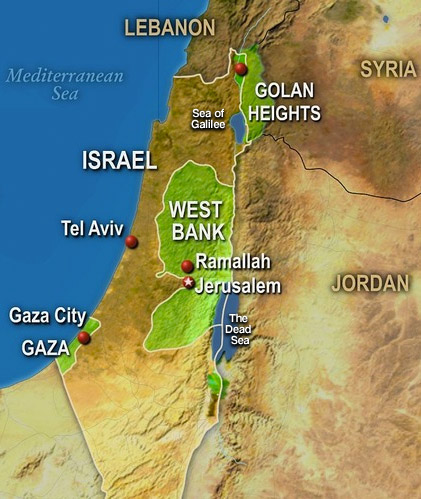 Our time in Galilee was great and today we will start making our way towards Jerusalem with quick stops in Golan Heights, the Jordan River, and the Dead Sea.  Today will be interesting for us since it will be the first time we enter Palestinian territories during our time here.  You can see on the map on the right that to drive from the Sea of Galilee to Jerusalem requires driving through the green area which on this map represents areas controlled by Palestine.

Other than the fact that we have to drive through a checkpoint to get into this area, we wouldn’t have even noticed a difference.  There is no feeling of not being safe or anything like that since this part of Israel has been peaceful now for many years.  The majority of the violence you see and hear about in this area happen near the Gaza Strip which can also be seen on the map (map source: PBS). 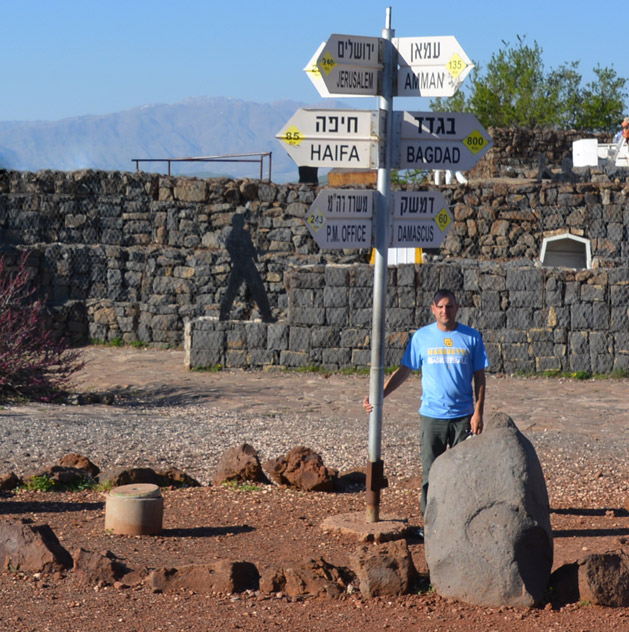 Sign showing how many kilometers we are from major Middle Eastern cities.

Today we actually headed north before going south so that we could check out Golan Heights.  We stop at an overlook that was used as a military bunker during the Six-Day War of 1967.  The overlook now sits in Israeli territory and from here you can see far into Syria.  We can see the closest Syrian village of Jubata al-Khashab pretty clearly, and the capital of Damascus is only 37 miles (60 km) away.  We’re so close to Syria that we can actually here explosions and bombs going off from their ongoing civil war.  I have mixed feelings from coming up here.  I think it’s cool to see the old ruins of this military bunker, but I feel a little disrespectful at the gawking we are doing at the Syrian conflict which is obviously far from finished.  I don’t think the people in the town of Jubata al-Khashab, which is currently being held by Al-Qaeda forces, would appreciate all the tourists standing here listening to their town being destroyed.

A view of the Jordan River 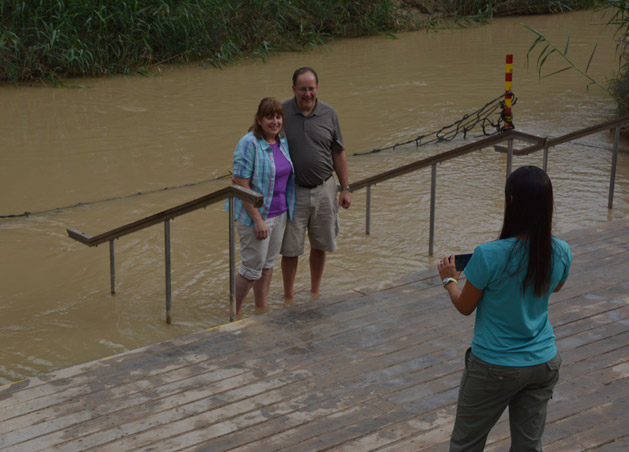 After Golan Heights we begin our journey south and into Palestinian-controlled areas.  Our first stop is to a section of the Jordan River where we can walk down some steps and put our feet in.  There is no specific area along the Jordan River where tradition says Jesus was baptized, but this is one of the spots that is easy to get to.  Most of the Jordan River tends to be pretty narrow, and a lot of the banks are also filled with mines left over from previous conflicts here.  To get to the river we actually passed by a few abandoned churches that looked like they were right out of some Armageddon movie. 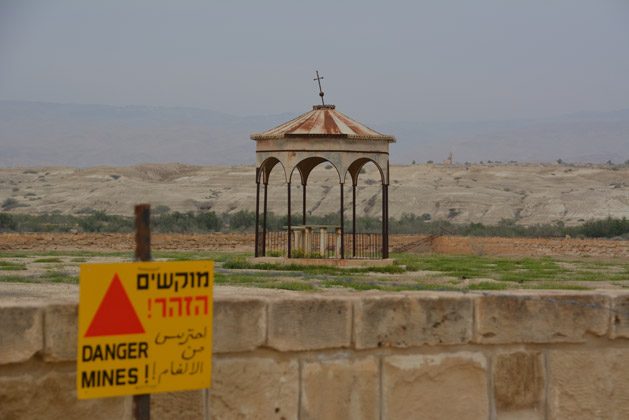 Floating in the Dead Sea is one of the activities I’ve been looking forward to most on this trip.  It’s one of those experiences that you can have in only one place in the world, making it much more unique and exciting.  We have also been blessed with some amazing weather today so that we can also comfortably enjoy our float instead of freezing while we float. 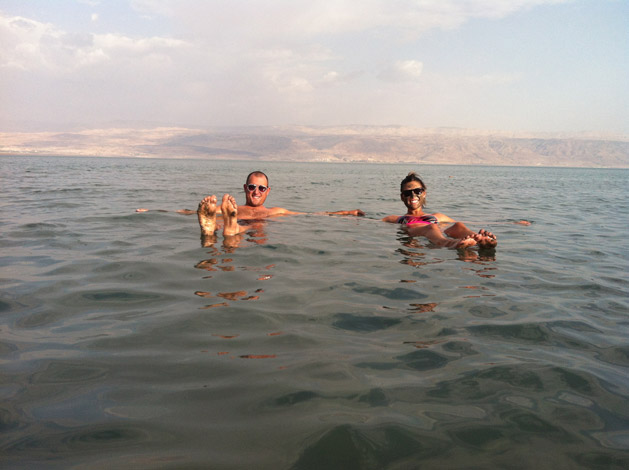 Getting in was a little trickier than I imagined and once you are lying on your back it’s actually harder to stand back up too.  Some of the visitors who are 60+ had a hard time getting out of the water and we had to help a few people who had flipped over and gotten stuck.  It was like watching Steve Urkel try to get into a hammock.  After floating for a while we decide to also take advantage of the sea’s magical healing capabilities by covering ourselves in its mineral rich mud. 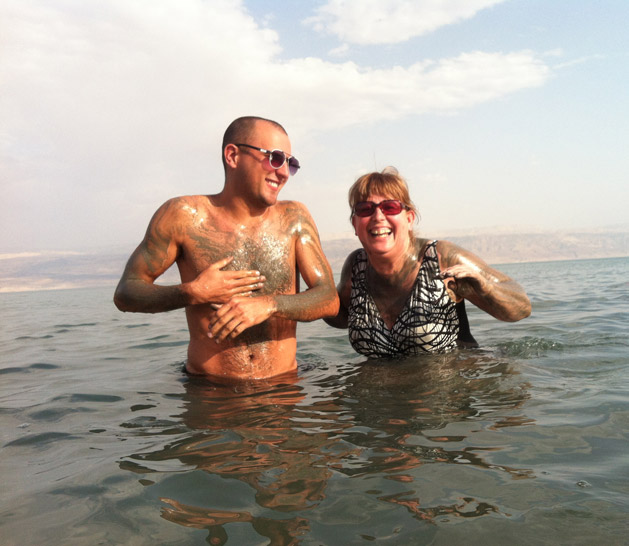 The last stop of our tour of the Palestinian-controlled area is the town of Bethlehem.  Known, of course as the birthplace of Jesus.  A few days ago we were in Nazareth, the childhood home of Jesus, and I thought it was funny to see a McDonald’s there.  But here in Bethlehem we were treated to something even better.  Not a Starbucks, but a ‘Star AND Bucks’: 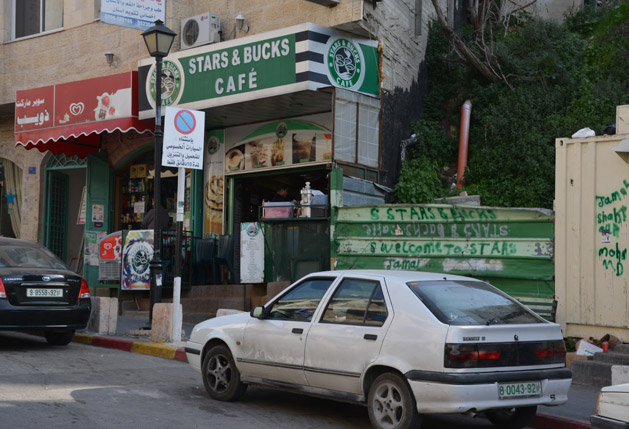 Sadly, we didn’t have time to stop in and taste to see if it’s the real deal.  Instead, we head to our only stop while in Bethlehem, The Church of the Nativity.  Many of the churches we’ve visited over the last few days have been destroyed and rebuilt at least three times, but the Church of the Nativity was actually spared from destruction many times, and the church as it is today actually dates back to 565 AD.  There, of course, have been many renovations and improvements to the structure since then.  It really isn’t much to look at from the outside, and the door into the church is actually a small hole that you need to squat down to walk into.  This was apparently done so people couldn’t ride their horses right into the church. 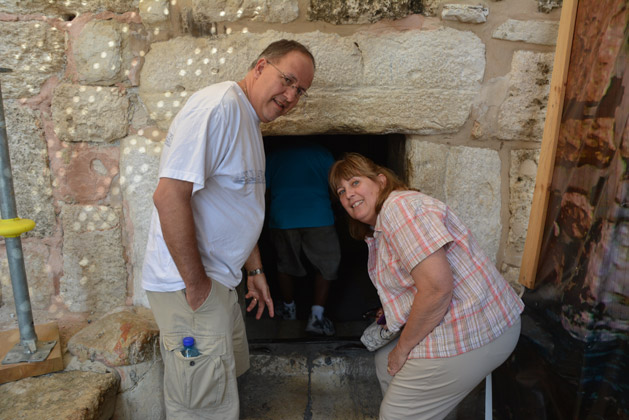 Dan’s parents entering the Church of the Nativity

The inside of the church is currently going through extensive restorations too, so most of the pillars are covered in scaffolding and wood.  It takes away from the beauty of the church, and today it feels more like a big airplane hangar than a church.  They did cut a hole in the current church floor so that you can see the original mosaic floor below, which is really amazing. 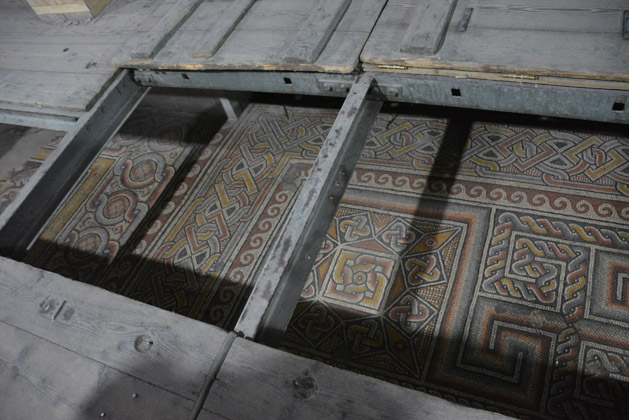 Mosaic floor dating back to the 4th Century.

Once you get closer to the front of the church, it begins to look a lot more like an actual church.  We have a lot of time to look around, considering we’ve been standing in line for almost an hour.  Everyone is slowly taking their turn going into the cave below the church where Jesus is believed to have been born.  As we get closer to the front, we start to see the chaos of everyone trying to enter the cave: 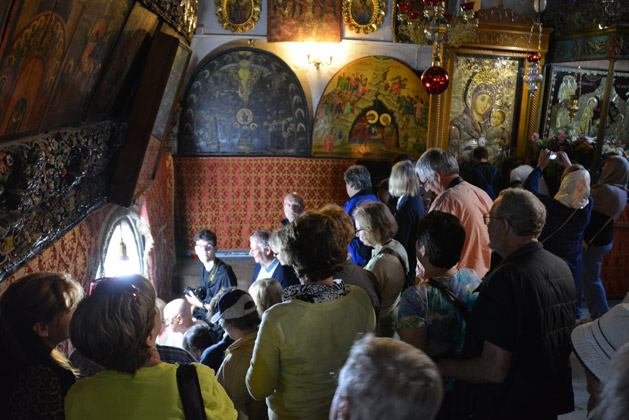 When we finally get in the cave, we see the star that has been placed in the spot where Jesus was born: 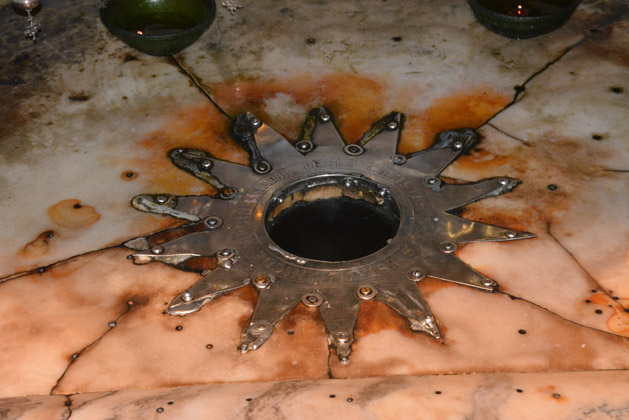 Then we see the marked spot where the manger used to be.  The manger that was found here in ancient times was sent to Rome and is in a church there.  Here is Alissa and I in front of that spot: 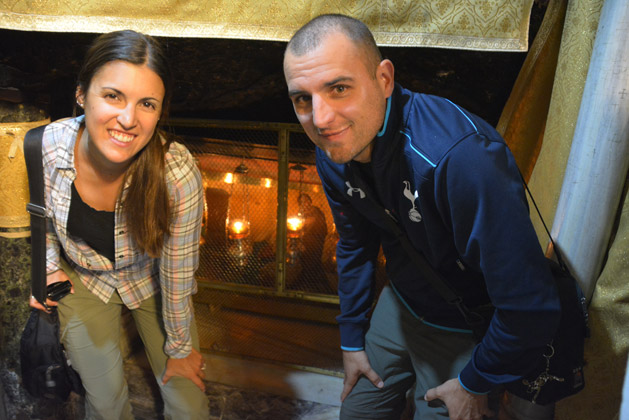 Our night ends with our group entering Jerusalem for the first time and checking into our hotel.  We need to rest up tonight to prepare for our full day of touring Jerusalem’s Old City tomorrow.