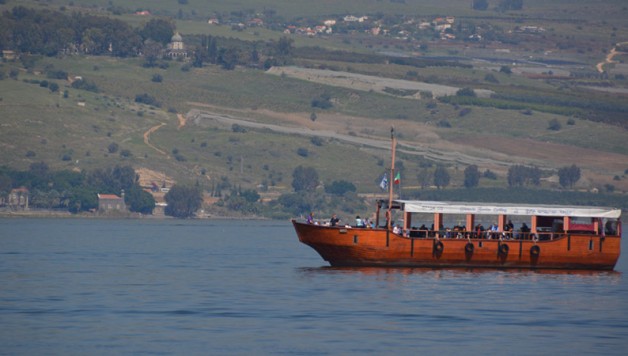 More Wine and More Jesus at the Sea of Galilee

After a tour of Jesus’s boyhood home Nazareth, Alissa and I have headed east to Tiberius and the Sea of Galilee.  This is the second stop on our Holy Land tour that we are currently on with my parents.  We arrived later in the afternoon, and since today is Friday and Tiberius is predominantly an Orthodox Jewish area, we soon learn that nearly everything in town shuts downs at 6pm in observance of Shabbat.  Shabbat is the Jewish holy day or day of rest, similar to Christianity’s Sabbath on Sundays, except that when they say rest, they actually mean rest—not watch football, drink beer, and watch Game of Thrones. 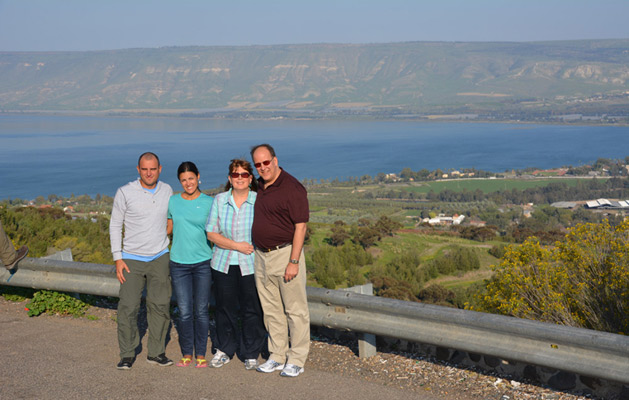 Our first view of the Sea of Galilee.

On Shabbat, no electronics or appliances can be used, so our hotel doesn’t serve any hot food other than the over-priced buffet.  So we’ve decided to make the 30-minute walk to town for dinner since watching us try to catch a cab on Shabbat is like watching a cat trying to catch a laser pointer.  On our way, we find a convenience store that is still open and stock up on some wine for the next few nights here in Tiberius.  I think the moment I was buying three bottles of $5 wine at a convenience store is when I realized my parents were getting their first experience of the kinds of things Alissa and I do on the road to save money.  I literally said to the cashier “which bottle is your cheapest red?”  Wine is becoming a theme on this trip!

We finally find a restaurant that is open and before we sit down, I ask the waiter if we are allowed to cork our own wine at the table.  “No problem,” he says.  After ordering our food I ask him for a corkscrew and four glasses, to which he replies, “You cannot drink your own wine here.”  Confusion ensues.  He says he misunderstood my question, which is fair, but in our defense, we probably wouldn’t have ate here if he had said no.  He finally agrees to give us a corkscrew but says he can’t give us glasses.  I think he is assuming we will just forget our wine and order some from the restaurant instead.  This waiter just doesn’t know us well enough.

As my mom opens the bottle, I quickly run across the street to another convenience store and get four small plastic glasses—the kind you use at the doctor’s office to swallow pills.  They even look used.  If the cheap convenience store wine didn’t give my parents a feel for our life on the road, then sitting in a nice restaurant drinking wine out of flimsy plastic cups sure does.  The plastic is so thin that it feels like it could crack and break in our hands if we squeeze to hard.  Somehow other tables have noticed what we’re doing and give us looks of disgust, as if our noisy plastic cups are offending them.  We make matters worse by only ordering two meals and splitting them between the four of us.  After we leave, the look on the manager’s face basically says “Please don’t come back.”

The Town of Jesus 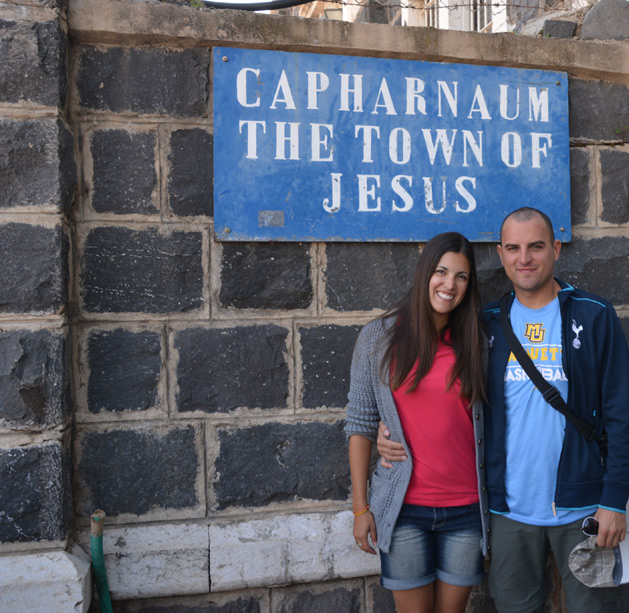 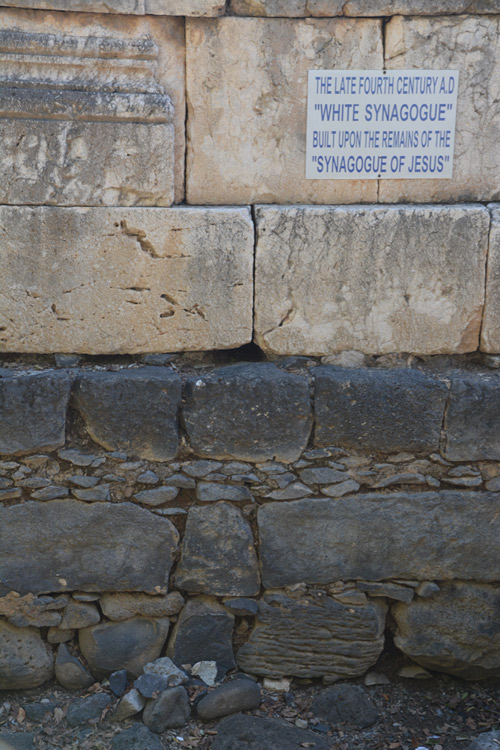 The next morning we get onto our tour bus and head to Capernaum, known as The Town of Jesus.  The town is located towards the top of the Sea of Galilee, and isn’t actually a town anymore, it’s just the ruins of a town.  That makes it much more nostalgic to see compared to Nazareth, which in contrast has an entire modern city built around its ruins.  Capernaum is known as the Town of Jesus because this is where, according to the New Testament, he spent two years with this town as his home while he preached in the nearby areas.  There are mentions in the Bible of a synagogue in Capernaum that Jesus preached at frequently.  When archeologists starting digging here, they found the ruins of two synagogues, with the second one built on top of the ruins of the first one. 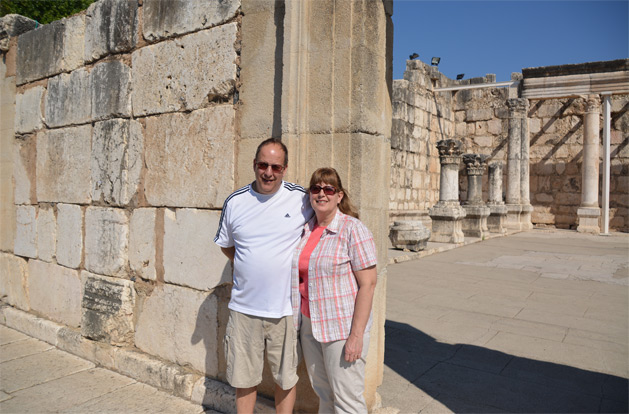 My parents in front of the entrance to the White Synagogue.

Behind the synagogue is the location believed to be the house of Saint Peter, one of the 12 disciples and the first pope.  Not a bad resume!  There is now a Catholic church built on top of the ruins that looks like a spaceship with a clear floor so you can view the ruins of the house below.  It is one of the most modern churches I’ve ever seen, at least from the outside.  We didn’t get to see the inside because there was a service going on. 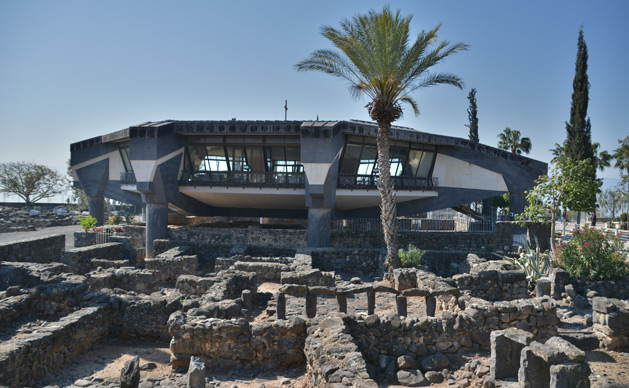 The Church of St. Peter’s House.

The Sea of Galilee

Our next stop is to step foot into the Sea of Galilee for the first time as well as steal some souvenir rocks (don’t tell the Israeli government!).  The water is way colder than I excepted, so I was out in minutes, but I did snap a shot of Alissa with my parents: 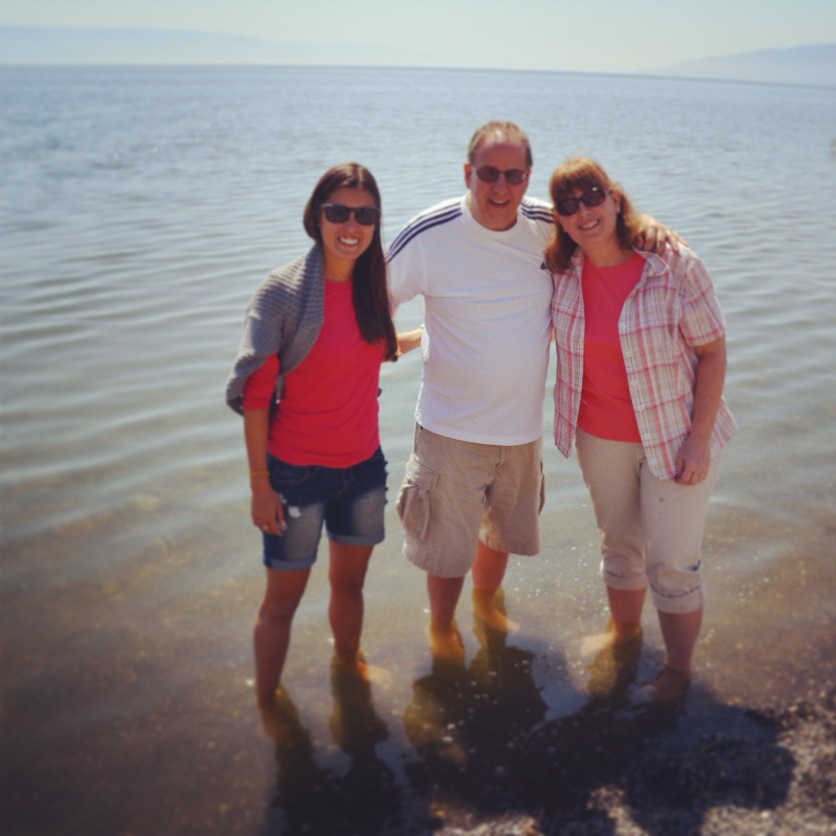 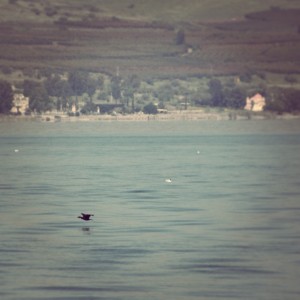 The view of Capernaum from the boat.

After stepping foot in the sea, the next step is to take a boat ride on it!  We’ve hired a boat that has been built as a replica of the fishing boats from 2,000 years ago.  They know this because in 1986 they actually found a boat from 2,000 years ago on the floor of the sea (picture here).  It’s fun being out on the water on a boat like this and they driver even shuts the engine off in the middle of the sea for a couple of minutes for all of us just to enjoy the moment and realization of the history here.

It was also really cool to see the sites we had visited earlier today from the boat.  To the right is our view of Capernaum from the boat. 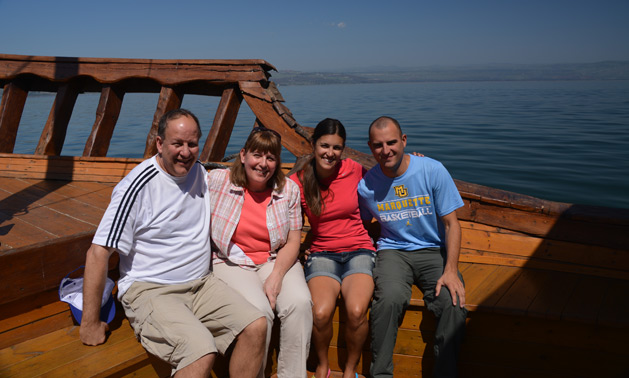 Us relaxing at the front of the boat.

1. The Church of the Multiplication of the Loaves and Fishes

Known by its shorter name, The Church of the Multiplication, this church is believed to have been built over the rock where Jesus performed the miracle of feeding the 5,000.  My favorite thing about the church is the windows.  Instead of being made of glass or stained glass, they used really thin marble.  It really adds a unique look that I’ve never seen in a church before. 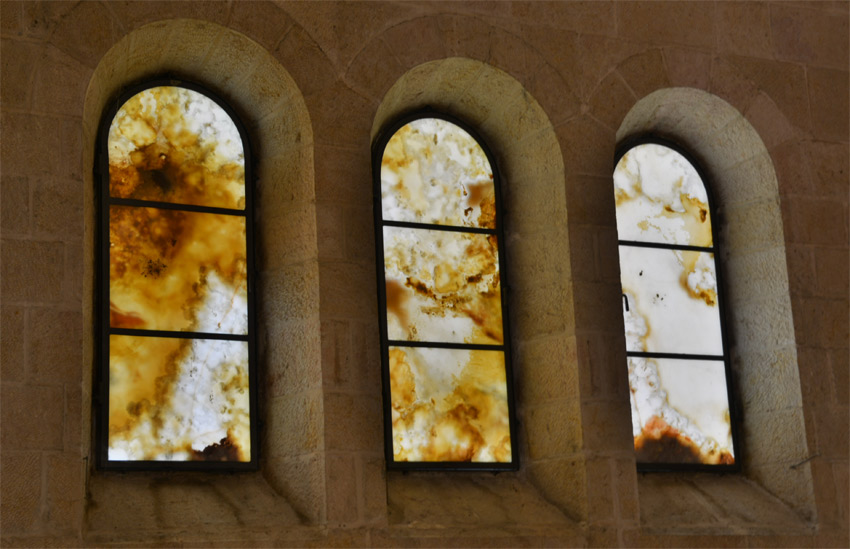 Marble windows of the Church of the Primacy of St. Peter

2. The Church of the Beatitudes

This church is on top of the hill that is believed to be where Jesus gave his famous Sermon on the Mount.  The Sermon on the Mount is where Jesus delivered the eight Beatitudes (the verses that start with “Blessed are…”  The church was built in 1936 and was actually commissioned by Italy’s Dictator Benito Mussolini which is ironic considering one of the Beatitudes is “Blessed are the peacemakers: for they will be called children of God.”  I wouldn’t really describe Mussolini as a peacemaker or fan of peacemaking.  Anyways, the church features incredible views of the Sea of Galilee and nearby countryside.  The domed ceiling inside the church as well as the gardens outside are also spectacular. 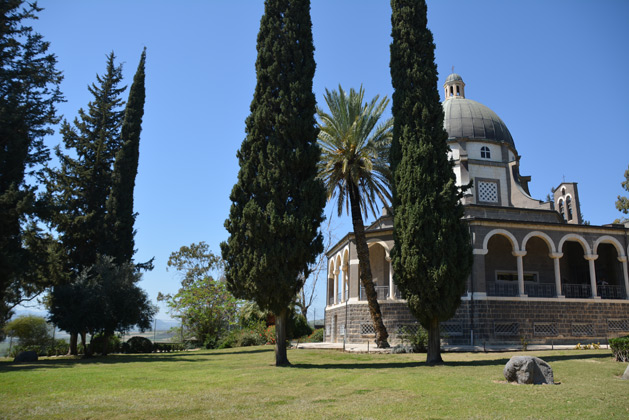 Church of the Beatitudes. 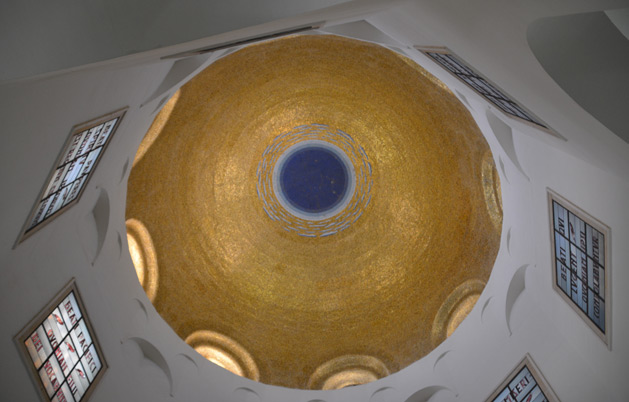 The ceiling inside the Church of the Beatitudes.

3. Church of the Primacy of St. Peter

This church is where Jesus’s appearance for the third time after resurrection is celebrated.  It is of course debated whether this is the actual spot, but the location is still holy in that every single Pope has visited this church.  There is a rock inside that is a pilgrimage site for Christians all over the world to come and touch. 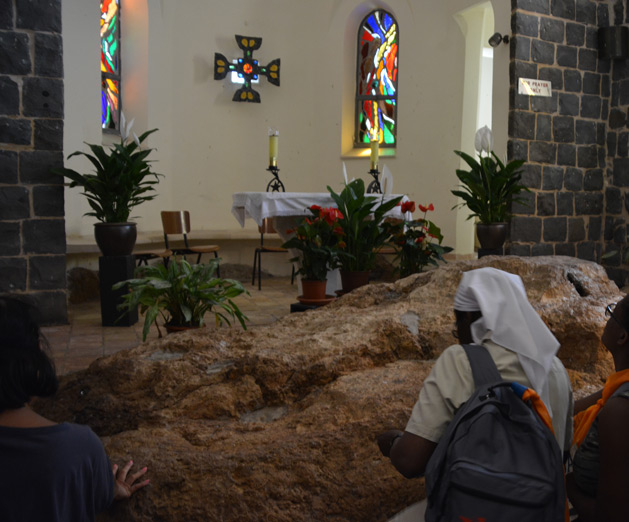 Pilgrims touching the rock inside the Church of the Primacy.