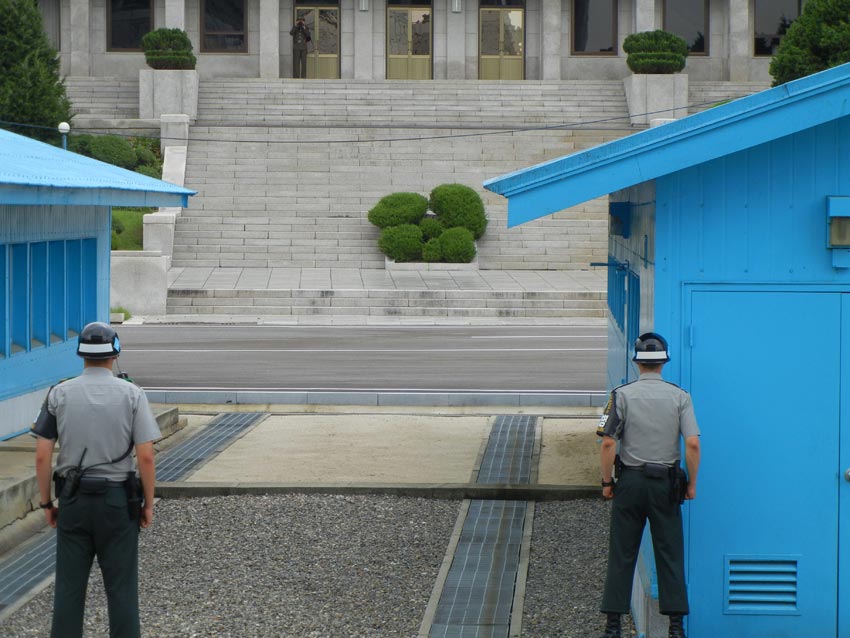 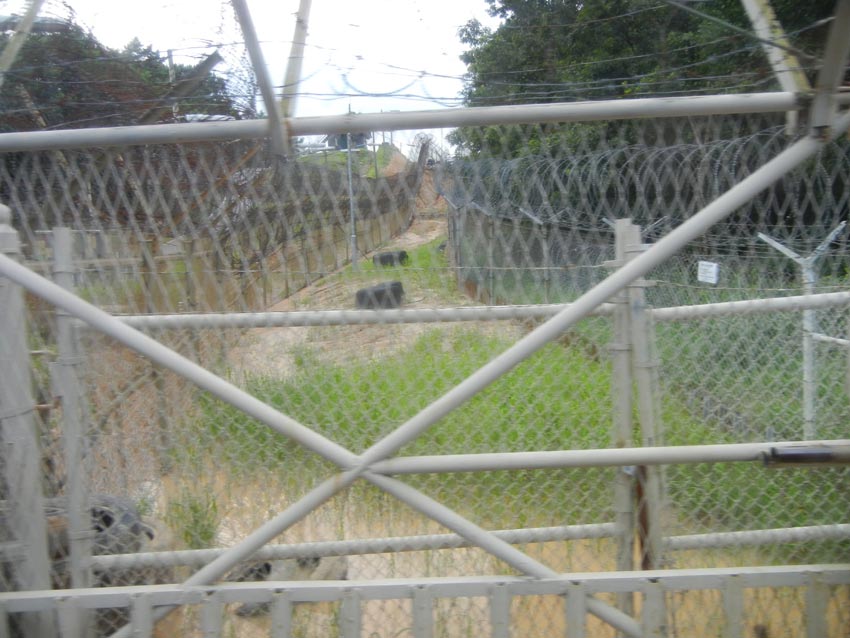 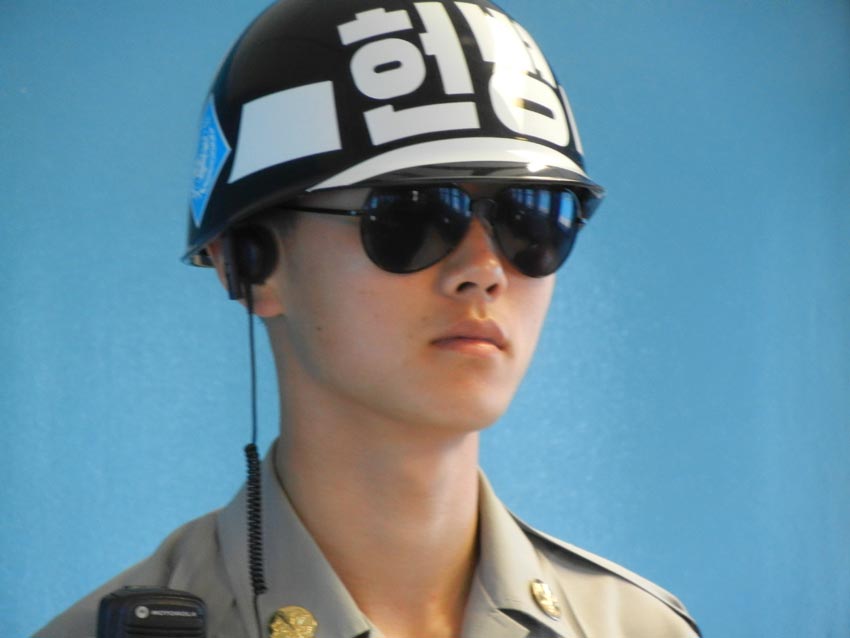 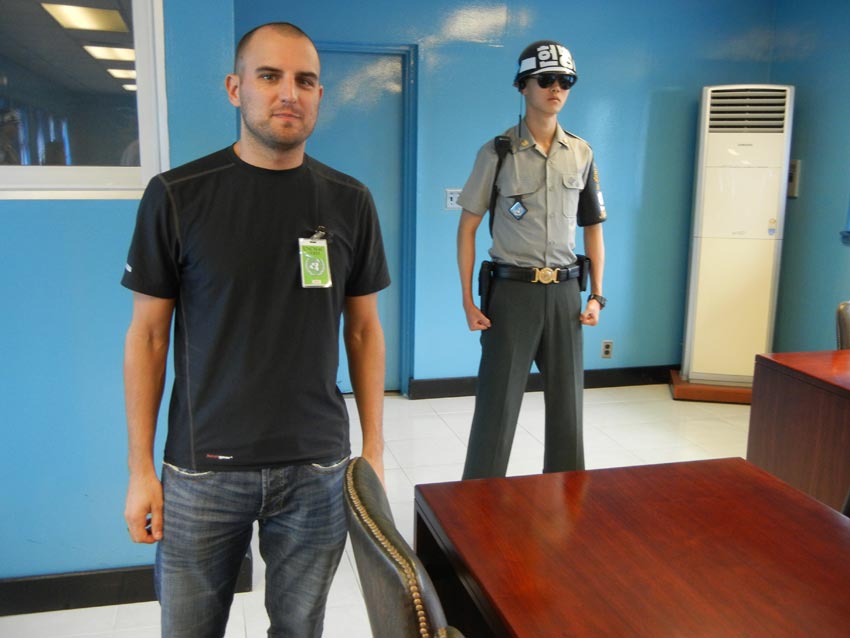 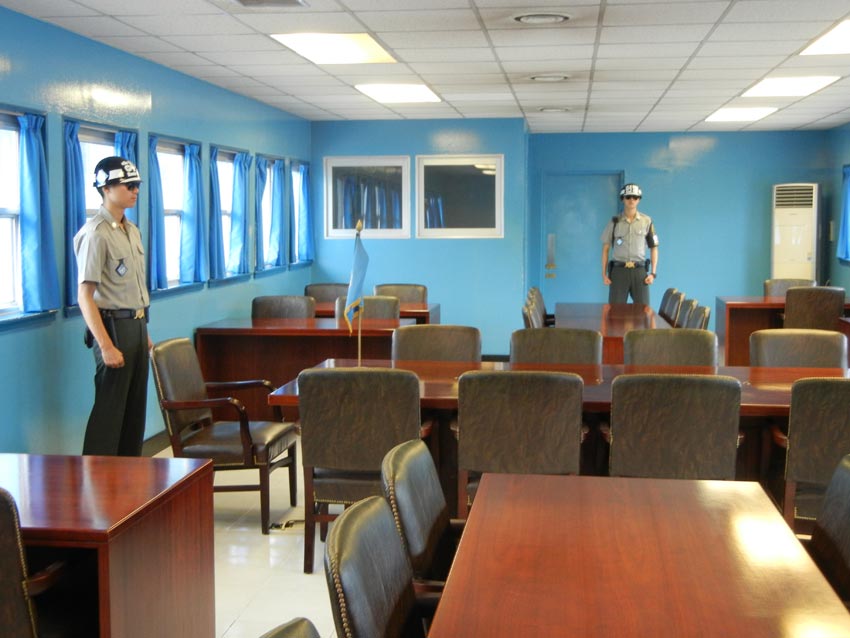 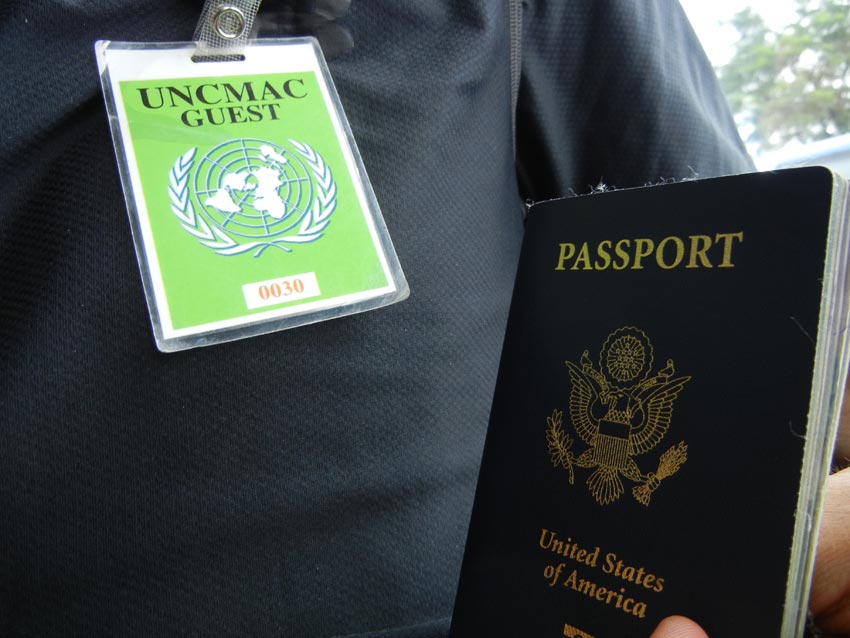 The Forgotten War and a Visit to Korea’s DMZ

Wedged between the global war of WWII and the controversial war of Vietnam sits the Forgotten War, known to most as the Korean War.  It lasted a little over three years, but technically the war has never officially ended since no peace treaty has ever been signed.  Here is my 20-second recap of the Korean War for those unfamiliar:

After WWII, the Allied Forces kicked Japan out of the Korean Peninsula.  The Soviets wanted to make Korea a communist country while the Americans wanted to set up a democracy.  They decided to split the country in half, and by 1948 the Soviets putting Kim Il-sung in charge of the North, and the U.S. led South voted Syngman Rhee into power.  In 1949, both the Soviets and the U.S. pulled their troops out of Korea, and in 1950, with the support of both China and the Soviet Union, North Korea invaded the South.  Three years of fighting saw each side take turns in pushing the enemy out of their territory, but in the end neither side gained an inch, and the cease-fire was signed with the geographical border the same as it was before the war.  60 years later, Korea is still divided, with a flourishing democracy in the South and the poverty-stricken, death camp creating communists in the North threatening war nearly every month.

We spent nine days in South Korea, and we were able to remember this war in three ways: Visiting a cemetery, visiting a museum, and visiting the tense border.

The UN Cemetery in Busan 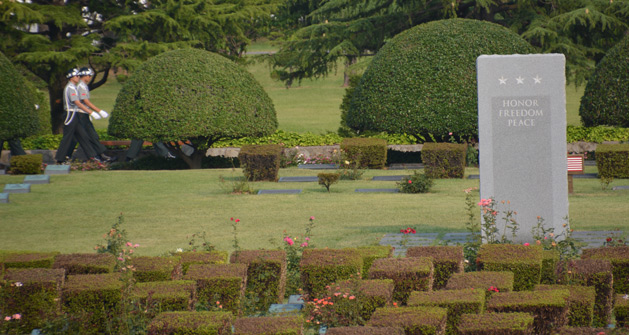 Our first stop is in the very south of the country where 2,300 United Nations and South Korean soldiers are buried.  The cemetery is the only United Nations cemetery in the world, and it is still guarded by UN soldiers (all of whom are South Korean).  The guard even saluted me when I walked through the gates.  That is a first for me, and I really didn’t know what to do.  Am I supposed to salute back? 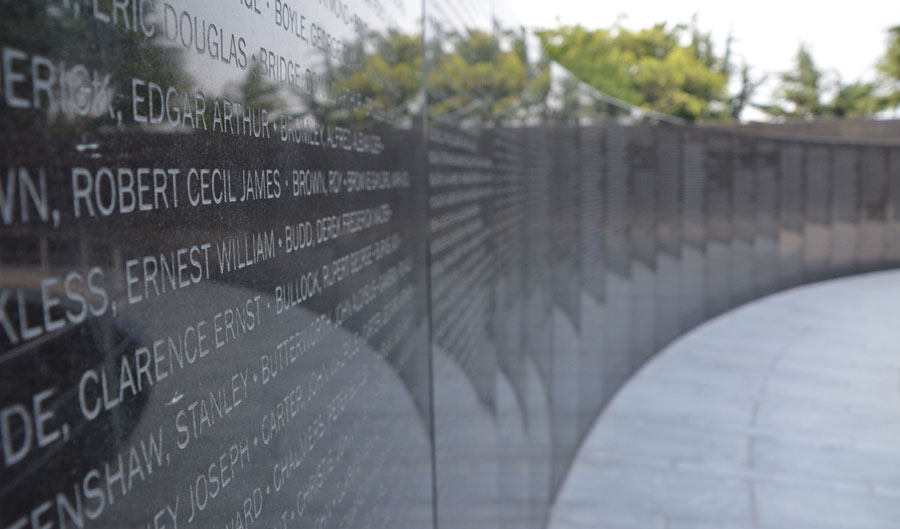 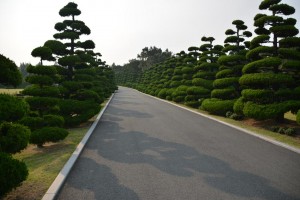 The cemetery is in beautiful condition, and there are also two large memorials built here.  One is a wall featuring the names of all the soldiers who died for this cause.  The majority of the names are from the U.S., and they even divided the American names into States.  The wall reminds me a lot of the Vietnam Wall in Washington D.C., and it’s just tragic seeing so many names of people from my country who died so young in the name of peace.  The youngest soldier in this cemetery died at age 17.  One of the most beautiful features of this cemetery are the trees that have been planted along the main road.  I am not a plant expert, so I have no idea what type of trees these are, but they really add something unique to the landscaping of this cemetery that makes it different from all the other military cemeteries I’ve been to during our travels.

The Korean War Museum in Seoul

I have had some really amazing luck with war museums the last two weeks.  Both the museum in Hiroshima and this museum in Seoul are two of the best museums I’ve ever visited.  Second and Third only to the WWII museum in New Orleans.

This museum features exhibits with short, but descriptive readings, and it flows very nicely.  In one hour you can leave here feeling like you’ve learned a lot as well as gained a perspective on what this country has been through.  There were a few exhibits that went a little overboard with special effects, like the “sit in a bunker and pretend you are being shelled by the Chinese” room.  That one felt a little unnecessary, but definitely a very Korean way of doing things.  I’m surprised there isn’t an Anime reenactment room too! 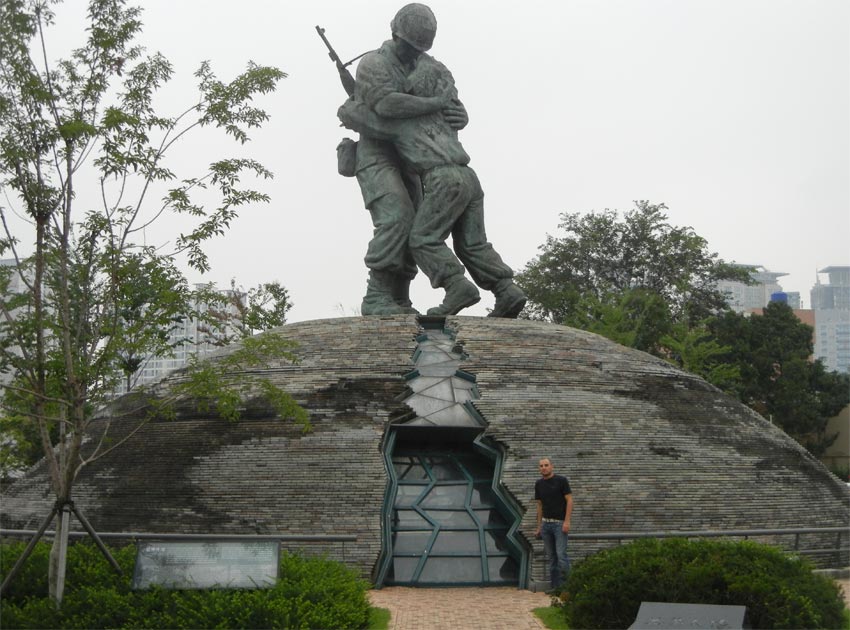 Outside the museum are all the memorials, including a wall similar to the one in Busan.  They have a great collection of old war remnants, including an actual battleship you can walk on.  My favorite memorial is the Statue of Brothers Memorial.  This memorial signifies the thousands of men and women who were separated from their loved ones when the country split.  The memorial specifically depicts two brothers who were forced to fight on opposite sides, however there were millions of civilian families who were separated in 1949, many of whom have yet to reunite 60 years later.

All these museums and memorials are great, but what I am really looking forward to today is seeing the living history at the DMZ (Demilitarized Zone).  The DMZ is the area between North and South Korea that is controlled by the United Nations, and serves as a meeting point for negotiations between the two countries.  It is one of the most tense places you can visit in the world, and it is something I’ve been looking forward to for months. 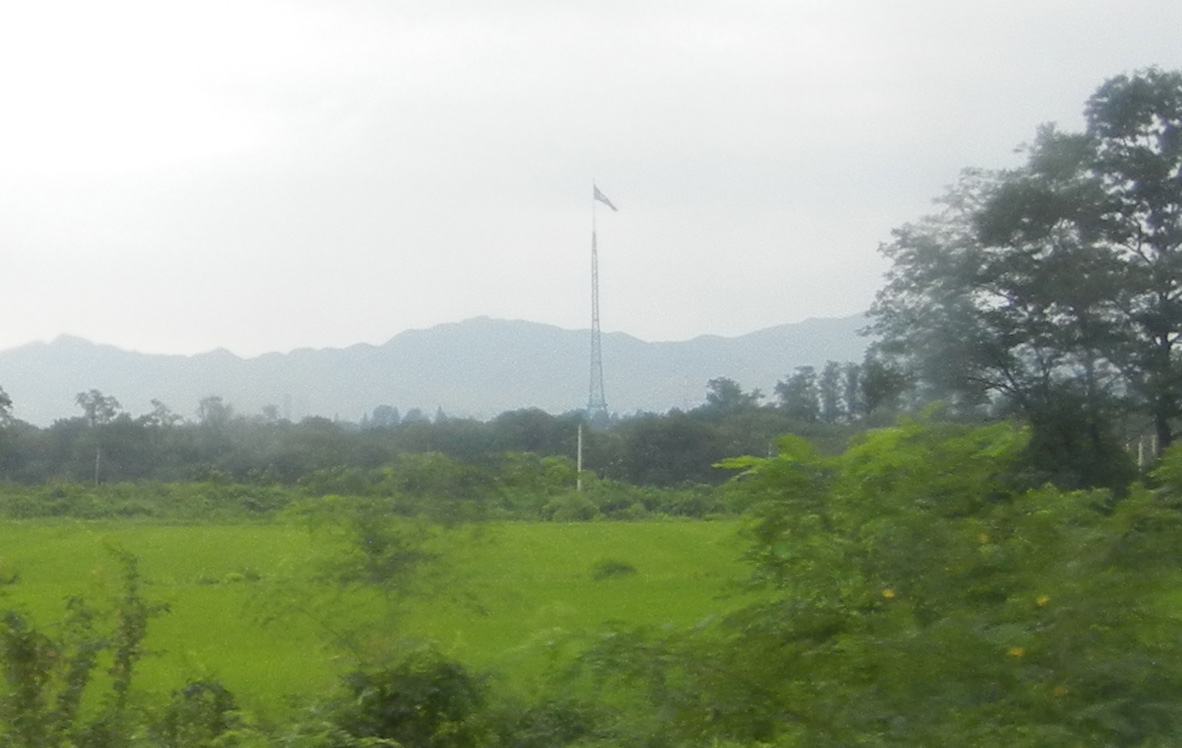 It takes about an hour to get from Seoul to the border.  On the bus ride, we are actually able to see North Korea on the other side of the river. Although it’s cloudy, out the window we can just see the top of the buildings of the famous North Korean Propaganda Village.  This village was built by the North Koreans in the 1950’s to try and show how prosperous the North was.  The village is completely empty though, and is all fake, including fake car billboards, fake apartment buildings, and timed lights to go on and off at night.  They even erected the world’s third tallest flagpole to show how great it is to live there.  This is why I don’t take anything the North Koreans say or do seriously.  They actually built a fake village to attempt to show communism is working.  I wonder if they actually think they are fooling anyone.  Are they really that stupid and naive?

After passing through two check points, we arrive to the entrance to the JSA (Joint Security Area).  We sit through a 30 minute briefing that talks about what to do and what not to do.  No pointing, no sudden movements, no laughing, always walk in pairs, and whatever you DO NOT RUN.  If you run, you will be shot.  We also have to sign our lives away on a document that says if something happens, it is our fault not theirs. 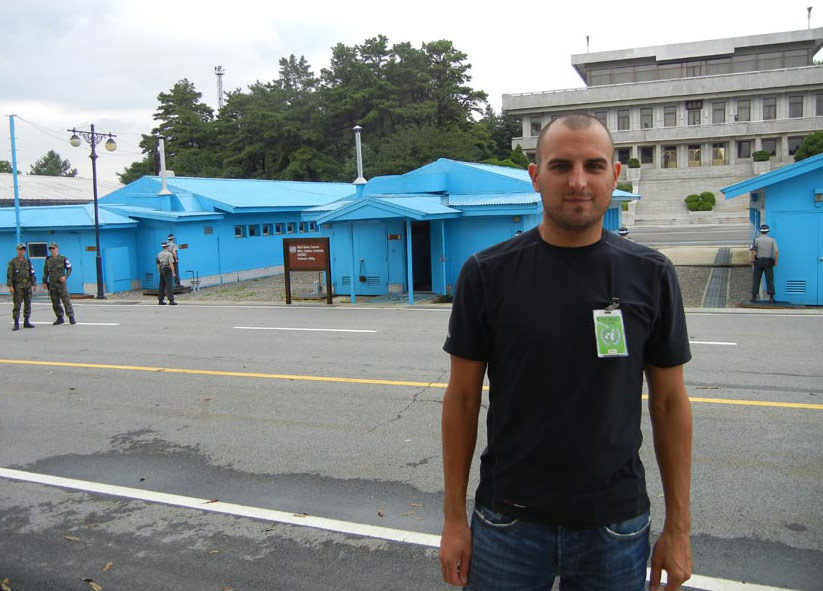 Standing in the JSA with North Korea in the background

When we finally walk through the South Korean Freedom Building and get to the border, it is completely silent.  There are South Korean guards standing completely still, facing the North.  Half of their body in behind a building, half is exposed.  On the North Korean side, there is one guy outside with binoculars, and 10-20 inside with telescopes, looking at our every move.  This is why we are not allowed to wear clothing with markings that could give away where we are from.  They don’t allow pointing and gestures because the North Koreans are also taking pictures of us, and can using those photos as propaganda.  For example, a picture of me pointing could be a poster in North Korea that says “Here is an American admiring the beautiful buildings of North Korea, wishing he could live here.”  It is very intense to know you’re being stared at by a bunch of lunatics with guns. 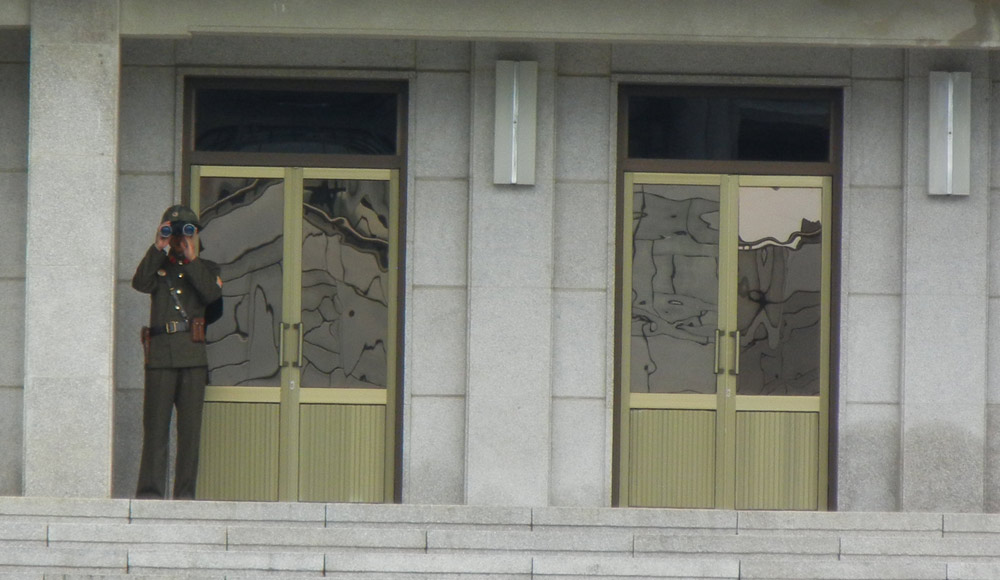 We then take turns going into the conference room buildings.  These buildings sit half on South Korea and half on North Korea, and is where all the joint discussions between the two countries are held.  Once we step inside, we are able to cross over and officially be in North Korea.  The picture below shows Alissa in North Korea and me in South Korea. 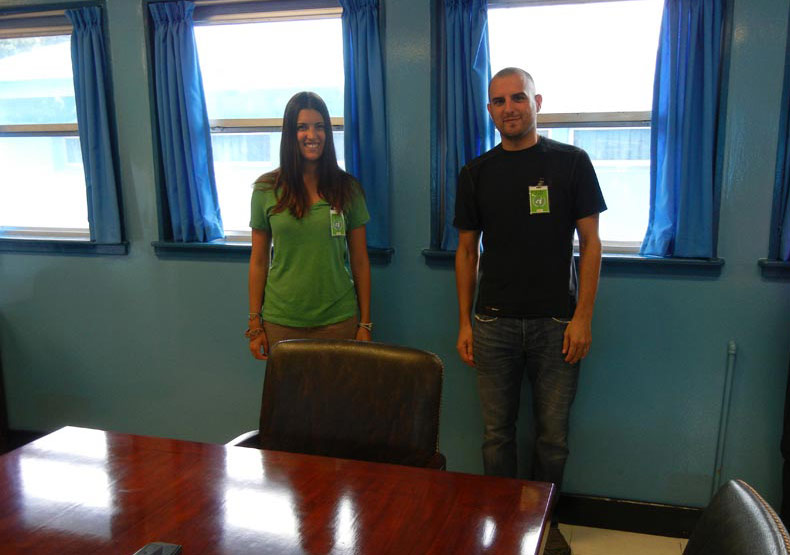 This is the first time in our travels that we are in different countries at the same time.  The table is situated exactly in the middle so that everyone on one end is in South Korea, and everyone sitting at the other end are in North Korea.  There are two South Korean UN guards in the room with us.  They stand completely still the entire time, guarding the door to North Korea.  Like any of us would actually want to go to there! 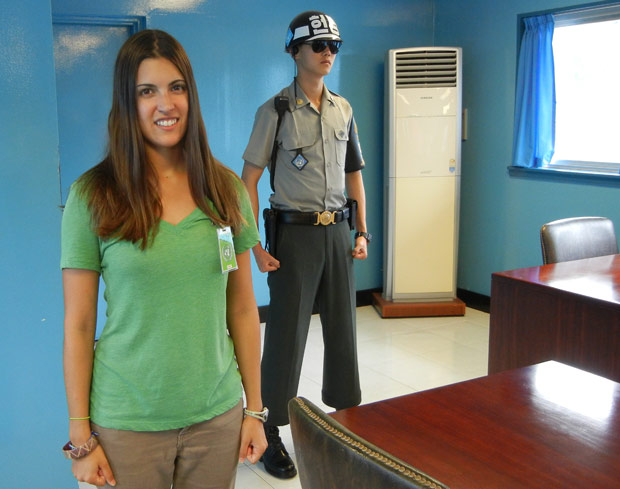 What I find so fascinating about this whole situation is the age of the soldiers here.  Military service is mandatory in South Korea, so many boys enter into the military at age 17/18 and serve their required two years before college.  The soldiers here on both sides all appear to be 19 years old.  I find it ironic that a conflict from 60 years ago is now being carried on symbolically by a bunch teenagers.  The whole area feels like one big show, and these young soldiers from both sides are forced to take part in it.  They rotate soldiers in and out of here every year or two, causing a continuous cycle of teaching the next generation how to keep the country split into two.  I bet these soldiers would be shocked at what they have in common with the ones on the other side of the line, but sadly they might never know.

After the tour, we get to spend a few minutes in a little JSA gift shop near the UN Base.  I purchased some North Korean currency as a souvenir, and they even had North Korean wine for sale.  We passed on the wine as I don’t want to support anything that country produces. 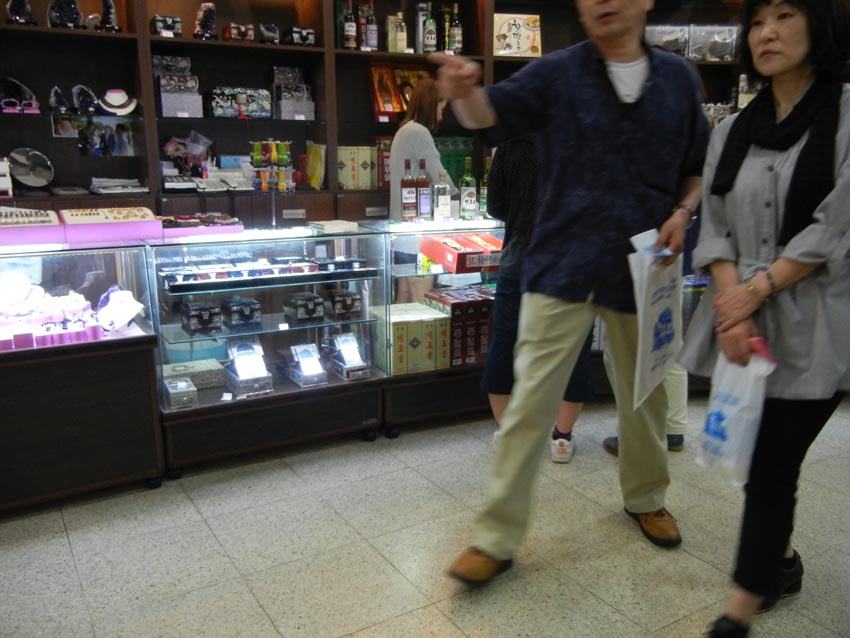