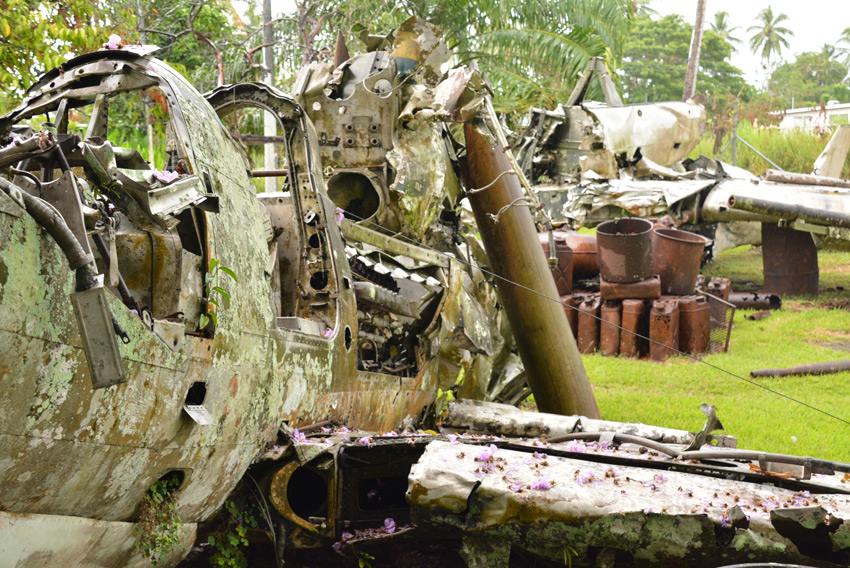 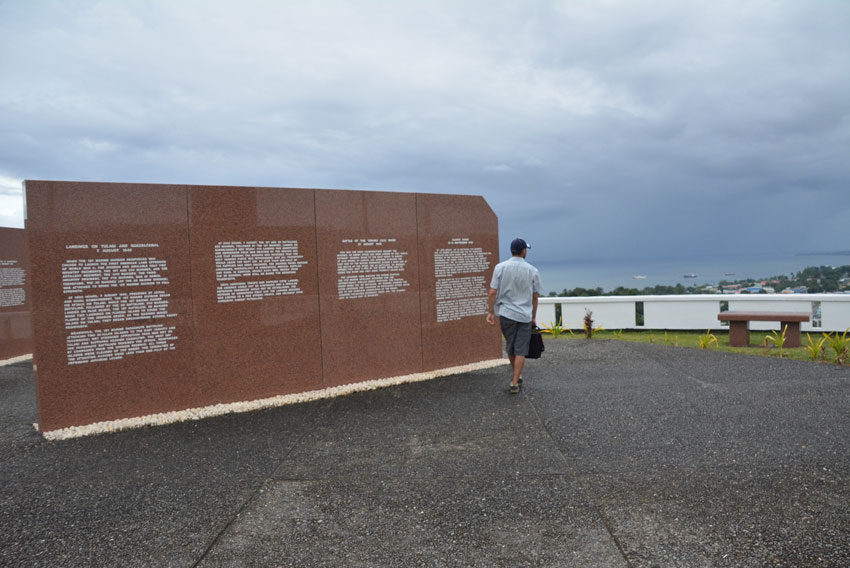 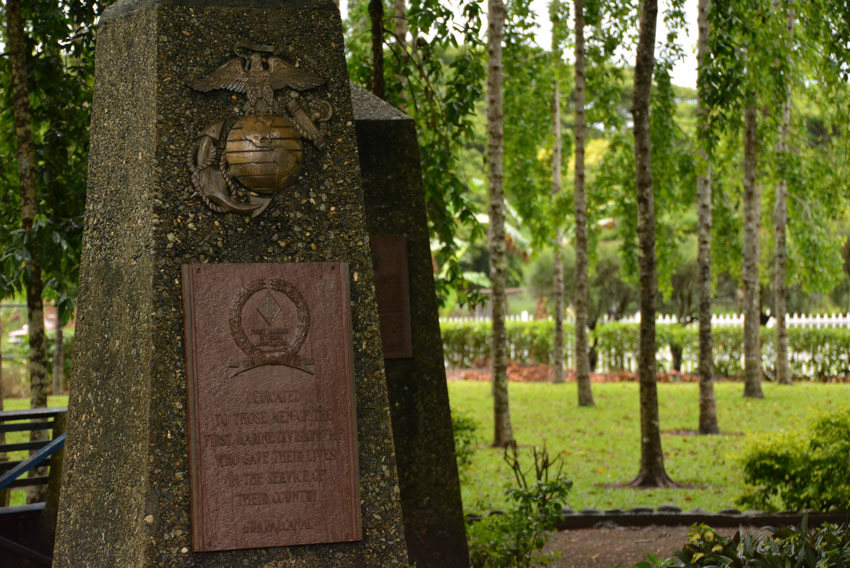 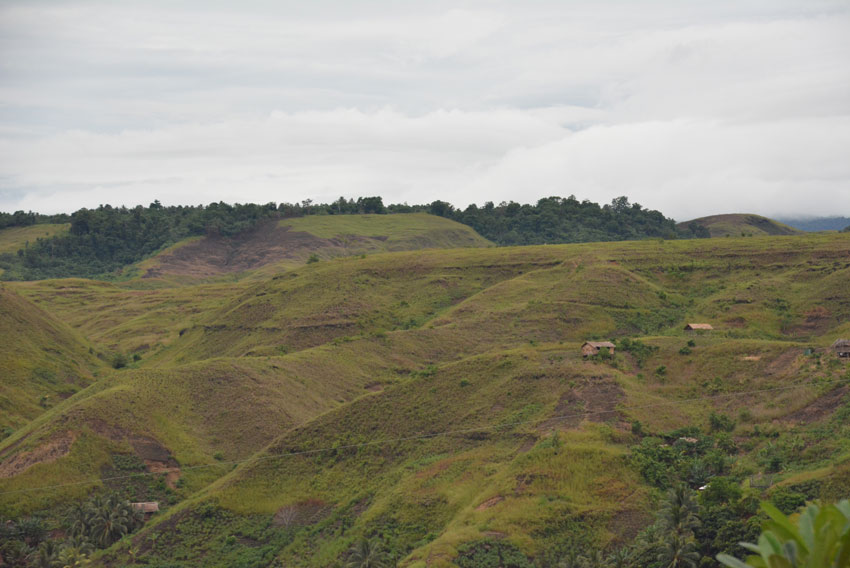 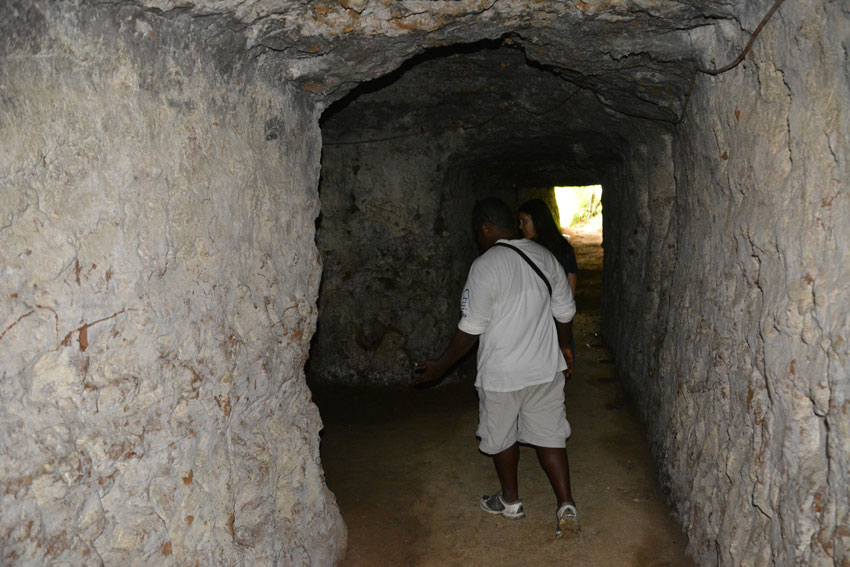 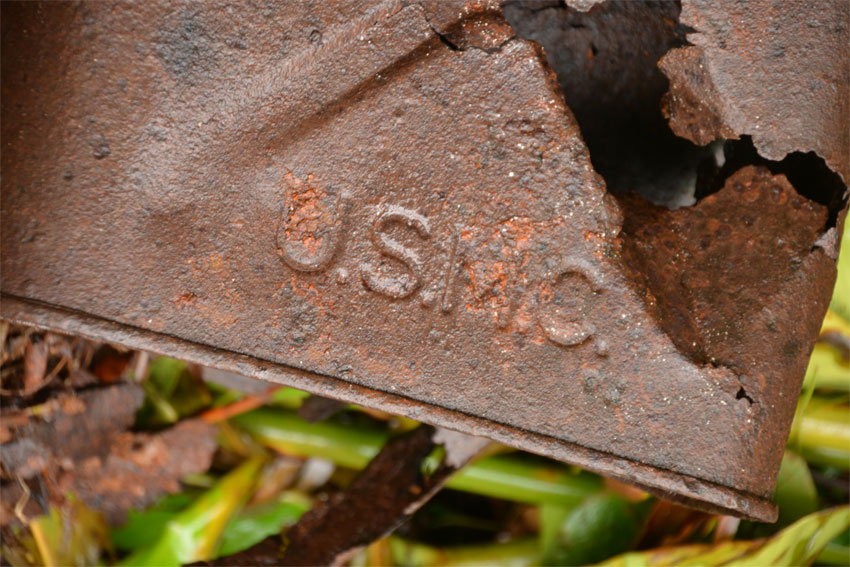 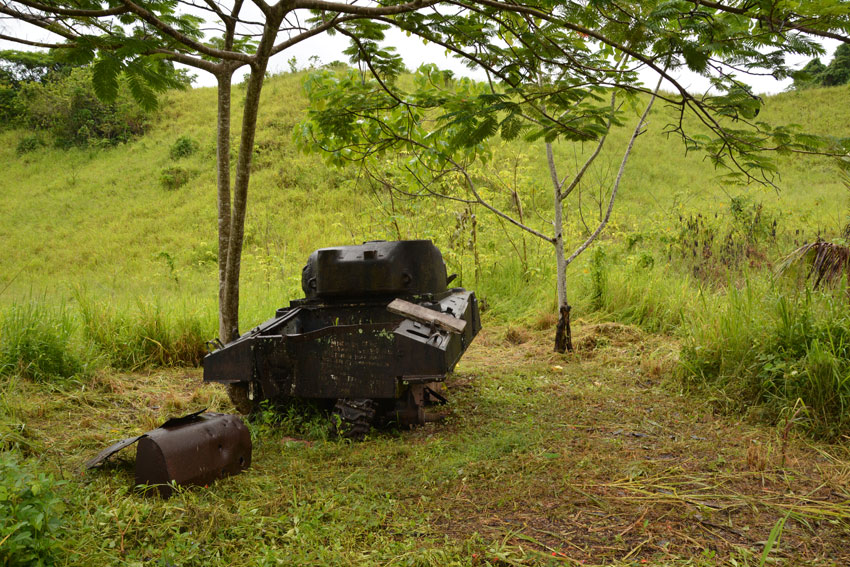 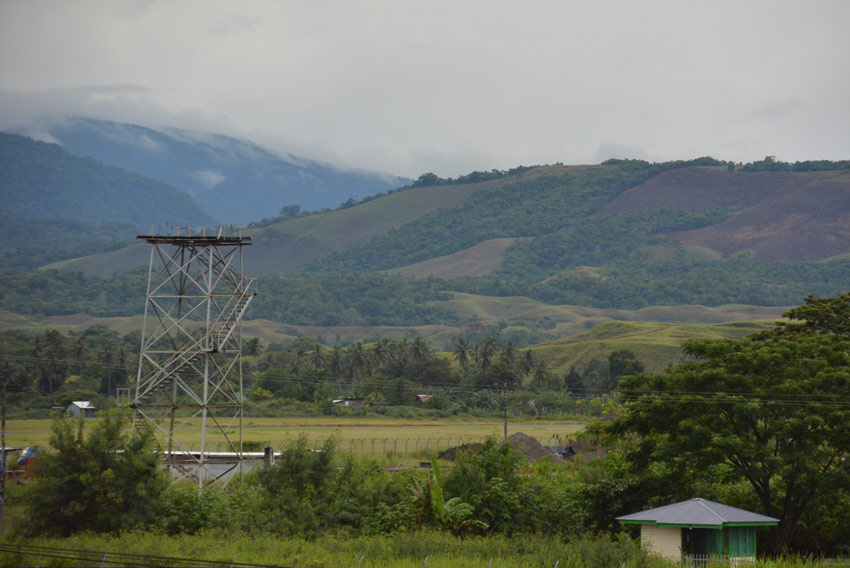 I really have myself to blame for my disappointment here on Guadalcanal. Having been to Normandy, arguably the most well-kept foreign American battlefield, I was spoiled. And by battlefield, I’m really referring to the landing beaches and the pristine cemetery at Omaha Beach. Since battles in Europe were mostly fought in cities and small towns, there really are not too many places to visit where you can still see what those soldiers saw 70 years ago. Normandy is one of the exceptions, which is what makes it so special. In the Pacific, however, battles were fought in remote jungles and beaches on isolated islands. Because of this, my expectations of preserved battlefields and intact wrecks were high.  I have always pictured the main areas of the Guadalcanal Campaign battlefields to be preserved and left alone out of respect for the thousands of men that died there and for deep jungle wrecks to be left alone for tourists to venture to.  And as much as I researched prior to coming, I was just not prepared for how little of the history here is left to see. 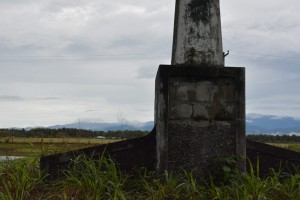 ABOVE: What’s left of a WWII monument near Henderson Field’s control tower after it’s been stripped of all metal.

It wasn’t always like this here.  As recent as the earlier 2000’s, Guadalcanal still featured many unexplored areas, as well as located plane/tank/ship wrecks for visitors like me to trek to.  Over the last ten or so years is when everything began changing.  And what started as a small theft here or there exploded into all-out chaos during the country’s civil war (1999-2003).  Almost every wreck and piece of war metal left has been removed, stolen, or sold for scrap by locals and foreigners alike.  Historic pieces of land have been either closed to the public, neglected, or bulldozed to make room for new developments.  One of the first monuments we see has been completely stripped of all its original metal plaques, which I assume was brass.

Honiara: The failing city, built on top of history 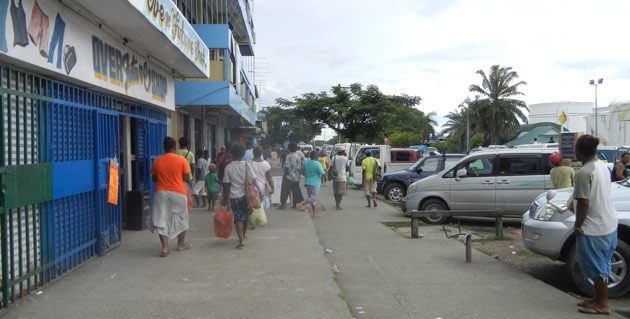 It was interesting to see that the city of Honiara was actually built directly on top of the battlefield itself. This is the main cause for the disappearing artifacts and lack of preservation.  The airport here, Henderson Field, is the same airfield that the U.S. and Japan were fighting for in 1942, and the hills where the Japanese hid are now overlooking a busy road and miles of shops and markets.  It isn’t the locals faults this happend, it was actually the Americans and British who built this city on top of the battlefield after the war. There was no city of Honiara before the war, and it wasn’t until the Americans built hundreds of buildings, roads, and docks (*plus an airport) that locals began moving here. *Technically, the Japanese built the airport, but that’s a long story. 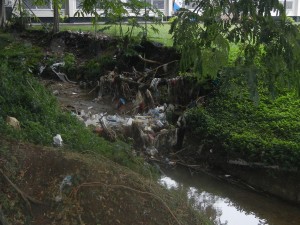 ABOVE: Garbage Dams like this are everywhere in Honiara.

Honiara (and the country itself) is hurting on many levels; politically, financially, economically, and environmentally.  The civil war problems have “stabilized”, but the government is still facing many problems, and it is obvious when walking the streets here that the main focus of 99% of the citizens is survival. Garbage is EVERYWHERE, and there is very poor regulation on logging, fishing, mining, etc, which is just adding to and speeding up the inevitable removal of history here.

I definitely don’t blame the people who live here for the lack of preservation. It isn’t there fault that two foreign powers decided to wage war on their island, and it shouldn’t be there job to preserve it. In reality, the local people here have done an amazing job over the last 70 years helping both Japanese and American family members find remains. I won’t completely let the locals off the hook though, especially the local government, as they are still to blame for some other issues here. There is no education given to local children about what occurred on this island 70 years ago. I understand that with the exception of some local scouts, the people here weren’t actually involved in the war. However, I think it would be helpful for the children to learn about the history of this city and why it was so important in shaping today’s world. When I see a creek where hundreds of Americans died completely littered with garbage, it angers me. Again, it’s hard to blame the people here, as it isn’t their fault that there is no garbage collection service (at least not an affordable one). We can’t expect the poverty-stricken people here to worry about preserving another country’s history when they have to worry about feeding their family. The bottom line is that with this country facing so many economical problems, the priority should be on stabilizing the lives of its citizens, not ensuring tourists like me get to see old war sites.  As you’ll see from my photos and comments below, there really isn’t much left, and when I read accounts from visitors who came here in the 1990’s who talk of trekking through the jungles and discovering plane wrecks and old ammo boxes, it really hits home that we just got here 10-20 years too late. 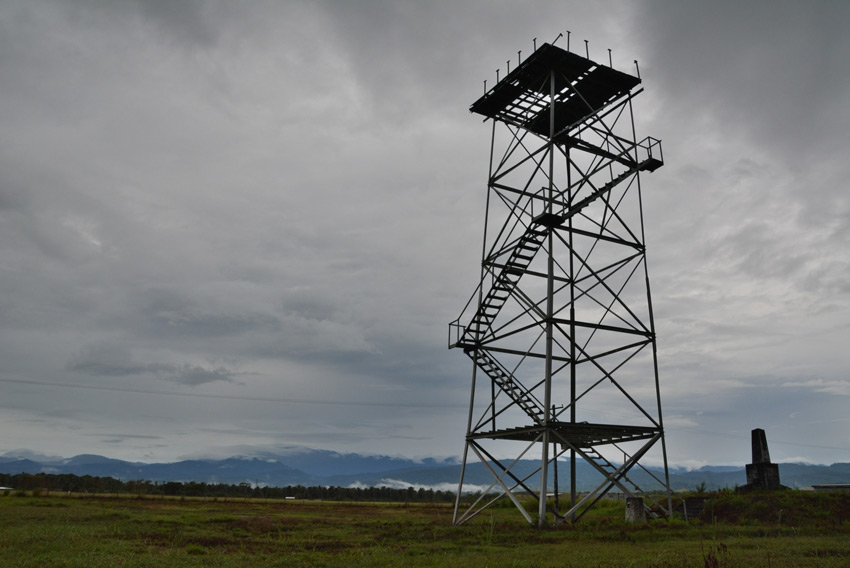 Since we only have three days, I’ve decided to concentrate my exploration of the island around U.S. historical locations.  It is raining today, and the forecast shows rain this entire week, so I am nervous as to how much we will actually be able to get to see.  We start at the airport, the site of the original airfield that the Japanese built, and the main reason for the U.S. deciding to invade in 1942.  The airport terminal has some pretty sad looking plaques on the wall, and the only remaining artifacts outside is the original control tower.  In 1942/43, the control tower was bombed nearly every day.  It has been rebuilt hundreds of times, the last time being 1943.  The tower today is still standing, and there is a old radio bunker still below the tower.  It is behind the airport’s barb-wire fence, but we were able to sneak in through a opening a few meters down the road.  I’ve read about other WWII tourists climbing this bad boy, but as I look at it’s crumbling cement base, I don’t think it would be a wise decision.  The monument below the tower is neglected, and there is no metal remaining or markings as to what it memorializes.   It is interesting to see the both Bloody Ridge and Mt. Austin in the distance from the airfield, which are the sites of two of the biggest battles that took place here.  I can’t imagine what it must have felt like to work by this tower in 1942, which was bombed and shelled by the Japanese nearly every single day for six continuous months.  Due to the heavy rain, the road up to see Bloody Ridge is too muddy, so we are unable to see that today. 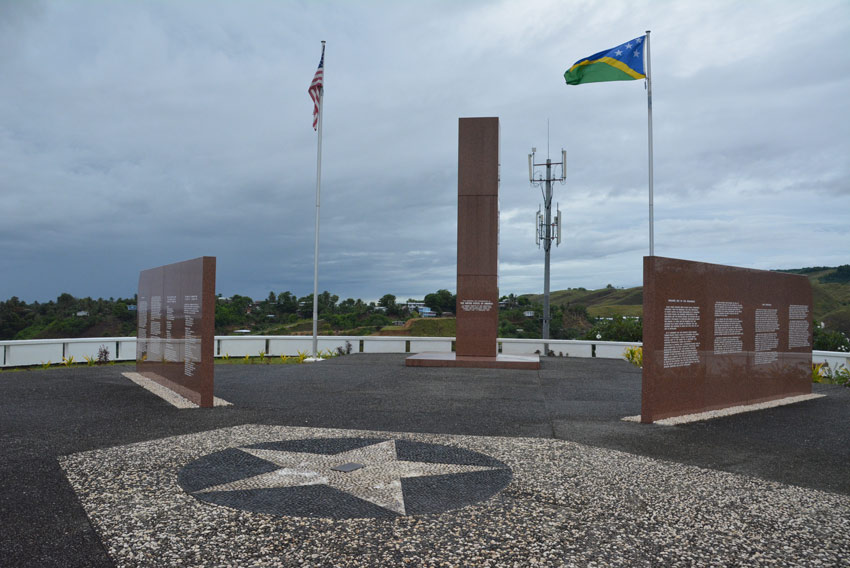 ABOVE: Cellphone tower rising up behind American Memorial on Guadalcanal

Dedicated in 1992, the Guadalcanal American Memorial is located on what’s known as Hill 73, a large hill in the middle of the city that overlooks many of the battlefield key sites.  Our local guide, Chris, actually grew up directly next to this hill, and as a kid during construction of the memorial he was riding his bike across the hill and crashed over what he thought was a rock.  It was actually the bones of an unknown U.S. Soldier.  The U.S. Veterans who commissioned the memorial decided to bury the remains of the soldier in the middle of the monument and marked it with a star that says “Unknown Soldier”.  In recent years, using a ring found with the body and DNA technology, the remains have been identified, but the memorial has not been updated.  The memorial is the best-kept war site on the island, which isn’t saying much once you notice they decided to build a cell-phone tower a few feet away from the American flag.  The memorial also shows many signs of wear and tear, and I’m told by Chris that improvements have been planned and scheduled, but I’m skeptical. 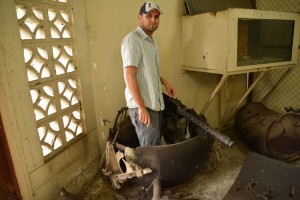 Our next stop is a local school that has a lot of WWII wrecks & relics on display.  The metal on these various planes, tanks, guns, etc, is actually in pretty decent shape.  As I look at the P-400 Airacobra fighter plane they have on display, I just can’t imagine these pilots sitting in such a small plane, getting shot at from the air, land, and sea.  Intense.  The school also has a small building containing a lot of guns, helmets, gas cans, etc from the war.

Because we were unable to head up to Bloody Ridge today, our guide offers to take us to a spot that is normally not included in WWII tours.  It is the former command post of the top US brass on the island in 1942-43.  It is located in tunnels below coral ridge and it features four or five rooms.  Everything has been removed from the caves, but the original floor is still in tact.  We head through the tunnels and at the very end, our guide shows us the ridge where one of the most famous pictures in Marine Corp history was taken.  Four days after landing on the island, the Marine’s were faced with a pretty dire situation.  The Navy had just been embarrassingly defeated off-shore and was forced to retreat from the area, leaving the Marines under-supplied and alone.  The commanding officer on Guadalcanal, General Vandegrift, decided to boost morale by gathering together all the officers on the island for a photo.  He told them he wanted to enjoy the photo in the future, showing them that he fully expected him and all of the men to survive the battle. 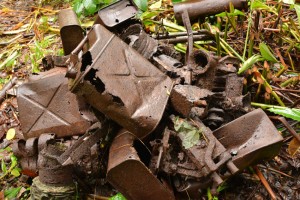 Our last stop today is at one of the four garbage dumps that the U.S. created when they left the island.  These dumps used to be full of relics and interesting war materials, but after 10+ years of looting and metal salvaging, there really isn’t much left.  It is kind of weird looking over the hill in the jungle and seeing a pit that used to be filled-in just empty.  On our way to the dump, we pass a old Sherman tank that had been used by the U.S. as target practice on the island.  Sherman tanks were too heavy to be used in swampy Guadalcanal, so it is cool to see one way out here.  By the time we are ready to leave the empty dump, which I imagine used to be an amazing site to visit, I am ready to leave this island.  It is just too disappointing to come all this way and see the sites in such terrible condition.  I don’t recommend visting the Solomon Islands for WWII sites, and if you do want to see the Solomons, visit the other islands where the beauty of the country and its people are much more evident.

9 Responses to Guadalcanal: The Disappearing Battlefield