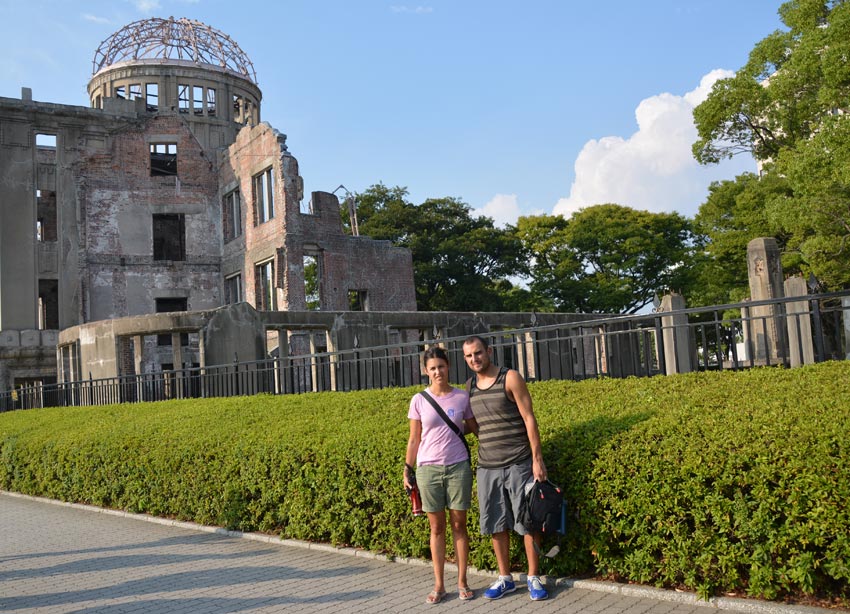 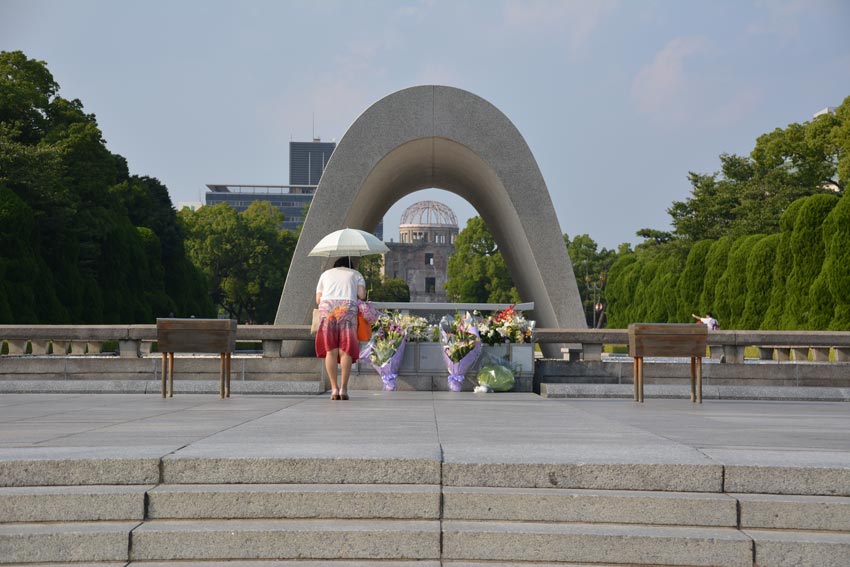 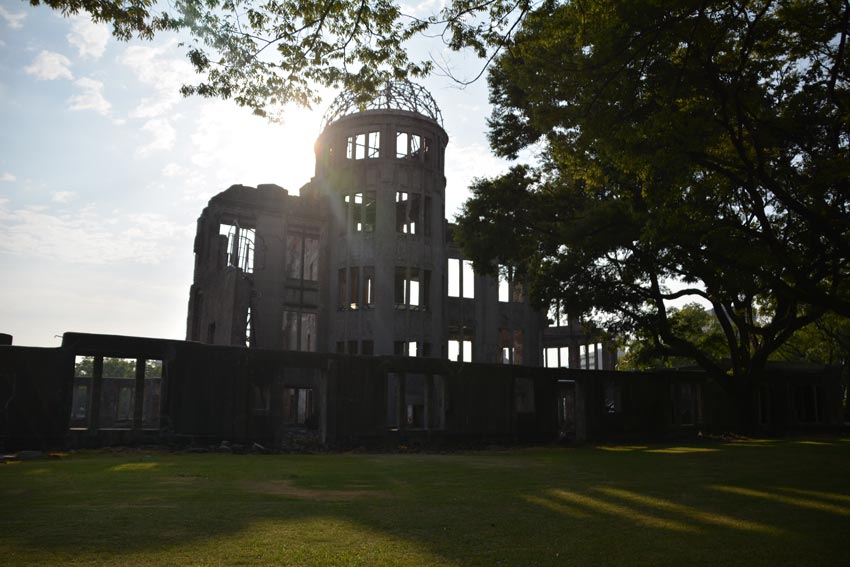 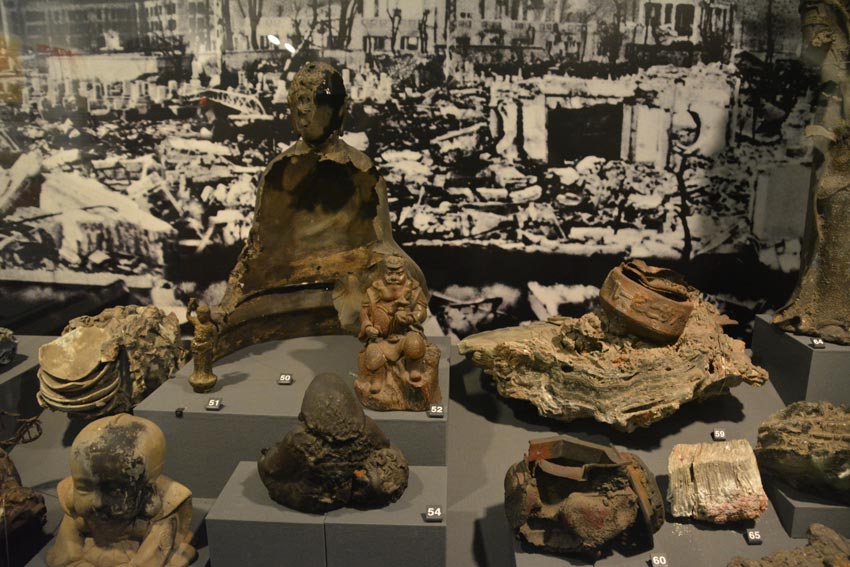 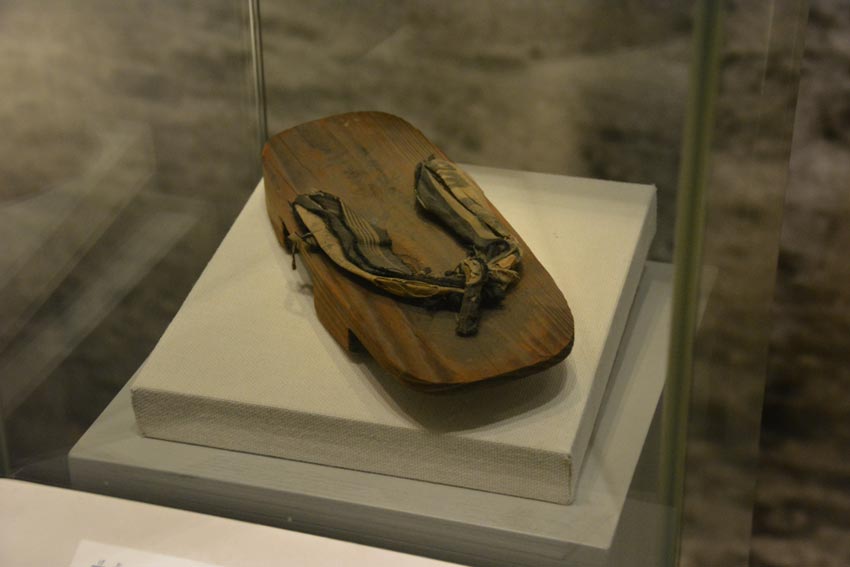 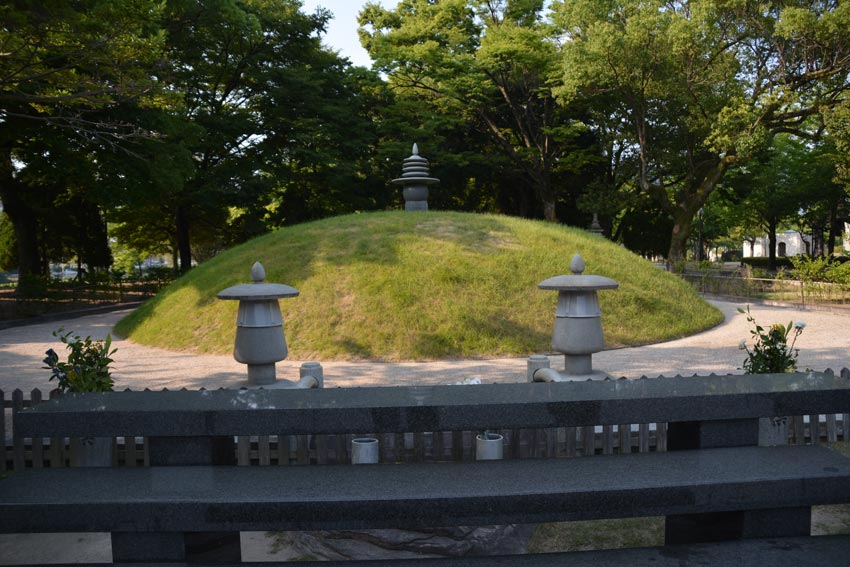 Hiroshima and the Case for a Non-Nuclear World

Five months ago, Alissa and I visited Guadalcanal in the Solomon Islands, the scene of the first land battle between the U.S. and Japanese in WWII.  There we got a glimpse of what the beginning of War in the Pacific was like, and today, we visit Hiroshima, to begin understanding the end of that war.  We got to Hiroshima on the day of the International Symposium for Peace 2013, which was a great way to learn some background on the current situation here.  Read about our experience at the symposium here.

This is the second WWII museum we have been to here in Japan.  The first museum, Tokyo’s Yushukan Museum, was the single worst WWII museum I have been to, and in my opinion is a dangerous attempt at re-envisioning the history of the war.   I had much higher expectations for the Hiroshima museum, and I would say that not only did the Hiroshima Peace Museum exceed my expectations, but it completely changed some of my views on the war.  The first thing I noticed was that the exhibits and history write-ups here are 100% accurate and transparent.  There is no tricky wording or half-truths like in the Tokyo museum.  Just facts.  And when there is a disputed fact, instead of dismissing the other country’s opinion, they simply state that there is a difference, they clearly explain it.  The Nanking Massacre example below is a PERFECT example of why I think some museums are excellent and some are garbage: 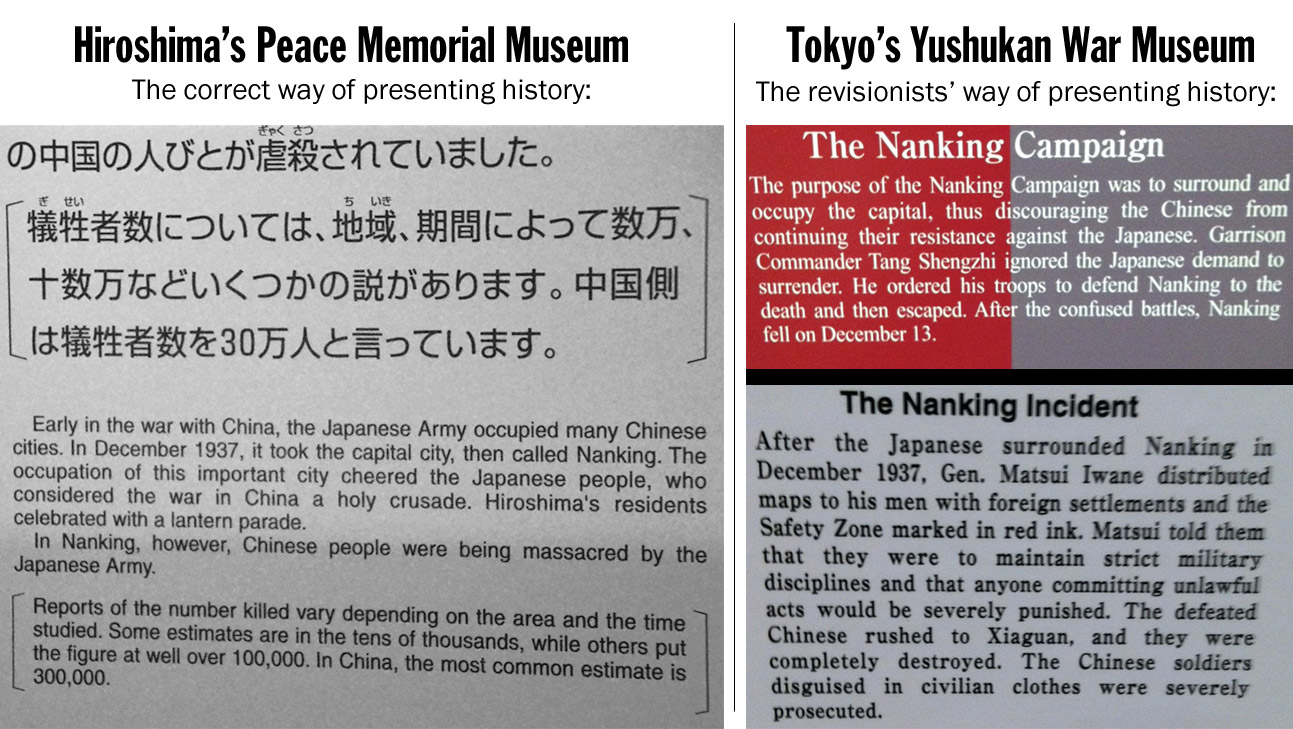 The museum is split into two buildings.  Building one is all about the history of the war and how/why the bomb was dropped and building two is artifacts from the city as well as exhibits on the health effects from radiation and exhibits on individuals who died from the bomb.  Building one’s main atrium features two large 3D models.  One of Hiroshima before the bomb was dropped, and one after the bomb.  It is incredible how many buildings were completely destroyed by this one bomb.  When the bomb exploded, the heat in the city reached over 2,000 degrees Celsius (3,500+ Fahrenheit), which is one of the most terrifying things I’ve ever read in a museum.

There are also many documents in this part of the museum that are absolutely fascinating, including a letter from Albert Einstein to FDR urging him to begin researching and developing an atom bomb.  Not only are the exhibits well put together, but the videos that are shown on the monitors are also very, very cool, and visually done well.

The museum was overwhelming, but here are some of my favorite items inside 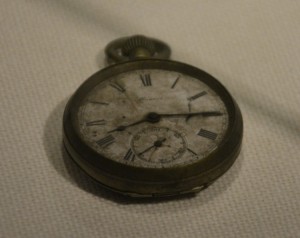 The bomb exploded at 8:15am on August 6th, 1945.  They know the exact time it exploded because many watches were found in the ruins that were all stopped at 8:15am.  Seeing this watch is very eerie and makes you think about just how fast a life can end.  The pocket watch is sitting in a glass case, with its hands frozen in time.

Something to note about the atomic bomb in Hiroshima is that the bomb was actually designed to explode at about 600 meters above the city.  In building two, there is a diagram set up showing where the bomb exploded above the city, to get an idea of the physics of the explosion.  An explosion that instantly killed over 60,000 people. 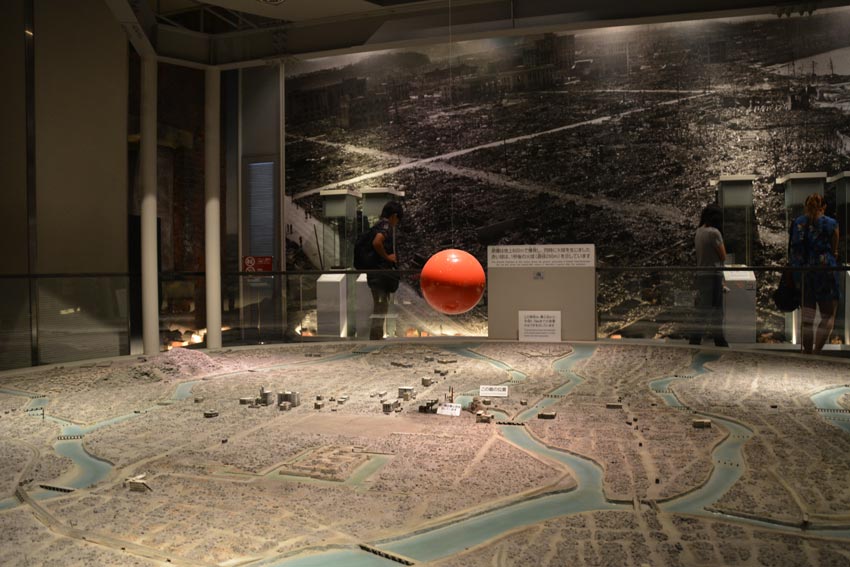 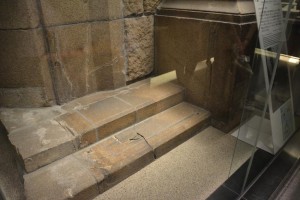 The heat from the blast caused many buildings to change colors, and on the steps of a local bank near the hypocenter, a person had been sitting outside waiting for it to open.  When the bomb exploded, the person was completely incinerated, leaving only his shadow behind.  The shadow steps actually stayed on these steps for about 10 years after the blast until they finally rebuilt the bank.  Thankfully, this historical artifact was saved and is now safely behind glass in the museum. 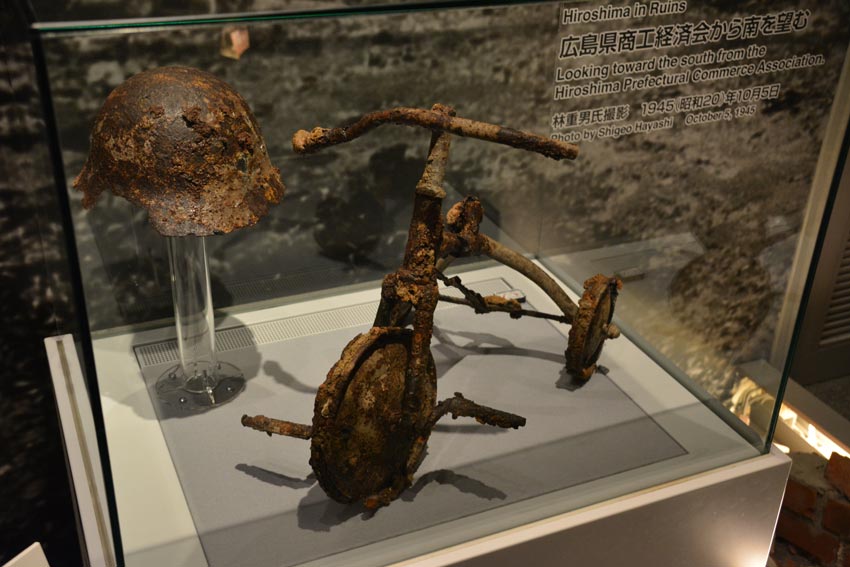 I won’t try to do this story justice.  Here is the exact quote from the plaque next to the tricycle.

Shinichi Tetsutani (then 3 years and 11 months) loved to ride this tricycle.  That morning he was riding in front of his house when, in a sudden flash, he and his tricycle were badly burned.  He died that night.  His father felt he was too young to be buried in a lonely grave away from home, and thinking he could still play with the tricycle, he buried Shinichi with the tricycle in the backyard.  In the summer of 1985, forty years later, his father dug up Shinichi’s remains and transferred them to the family grave.  This tricycle and helmet, after sleeping for 40 years in the backyard with Shinichi, were donated to the Peace Memorial Museum. 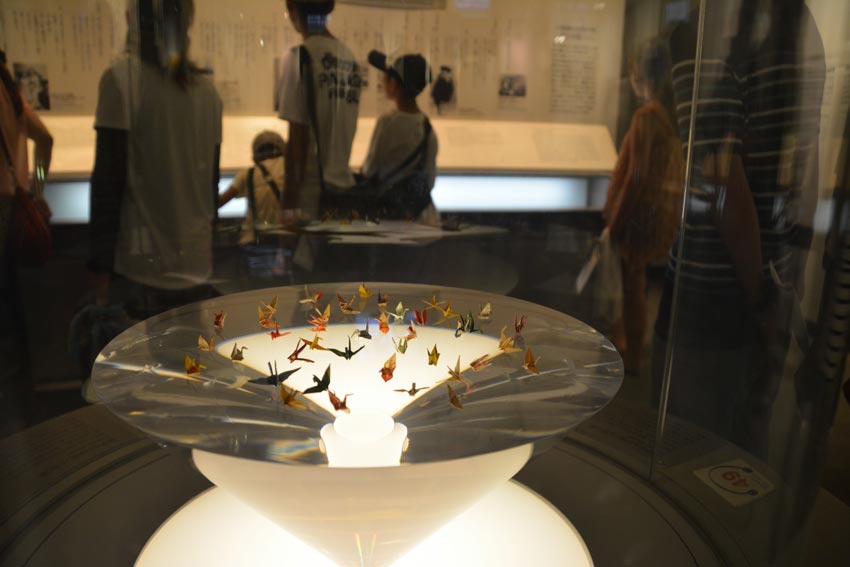 On of the most heart-breaking stories of the bombing is that of Sadako Sasaki.  Two years old at the time of the bombing, she was only two km away from the hypocenter when it exploded.  She survived the bomb with what seemed to be little injury.  However,  nine years later, she began developing purple skin rashes and was eventually diagnosed with leukemia (known in Hiroshima as “atomic bomb disease”) and was given less than a year to live.  A friend came to visit her in the hospital and told her of a Japanese legend that if someone folds 1,000 paper cranes, they will be granted life and healing from the gods.  So Sadako began working day and night to fold as many paper cranes as she could.  However, she was only able to fold about 600 before she became too weak and lost the battle to her disease. 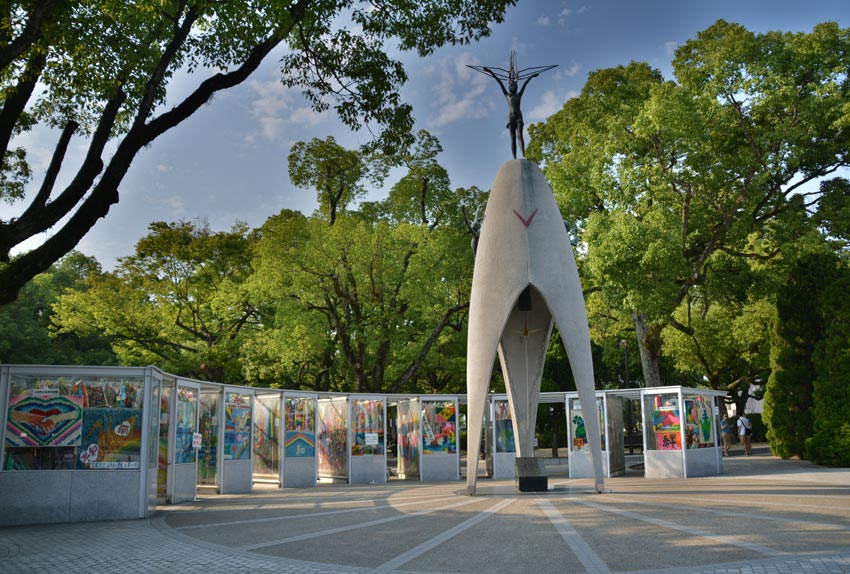 Her story inspired so many children in Hiroshima, that the locals finished her project and buried her with 1,000 paper cranes.  The legend continues to live on, and thousands of paper cranes are still being mailed to Hiroshima every day.  There is a Children’s Peace Monument inside the Hiroshima Peace Park commemorating Sadako’s efforts, and there are glass cases full of these cranes.  A truly inspiring and tragic story of an innocent life, stolen by war.

Arguably the most iconic image associated with the Hiroshima bombing is the Prefectural Commercial Exhibition Building, now known simply as the A-Bomb Dome.  It was the only building near the bomb’s hypocenter that remained standing after the explosion.  It still stands today as it did on August 6th, 1945, and can be viewed from the Peace Park across the river. 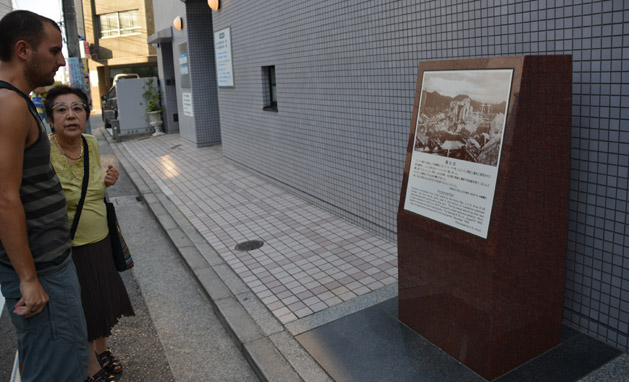 After touring the museum and the peace park, Alissa and I set out to find the bomb’s hypocenter.  We had to walk across the river and through some back alleys to find it, but after about 20 minutes of searching we found the memorial that marks the exact location below where the bomb exploded.  Unlike the A-Bomb dome, there seems to be very little tourist interest in the Hypocenter location.  For 15 minutes, we were the only two people standing here, and while we were taking in the historical significance of this spot, a lady approached us and began a conversation.  Her English was not very good, but she was able to tell us that her father is a survivor of the bomb and that he has scars on his back and neck from the bomb.

Americans are brought up with the idea that the dropping of these two atomic bombs were necessary to end WWII and how the killing of 200,000 people actually saved millions of American and Japanese lives. While this museum hasn’t necessarily changed my belief in that fact, it definitely has changed my perspective on just how awful these two bombs were.  How inhumane nuclear weapons actually are.  It’s easy to think of this bomb as just another weapon used on a foreign land, but it really is more than that.  Seeing pictures of humans with skin melting off their hands, walking around helplessly and confused before dying, is not something that leaves your head quickly.  There are many people here that argue the bombs were not necessary to end the war, and while I don’t agree with that 100%, I do agree with their message of peace and elimination of nuclear arms from the world.