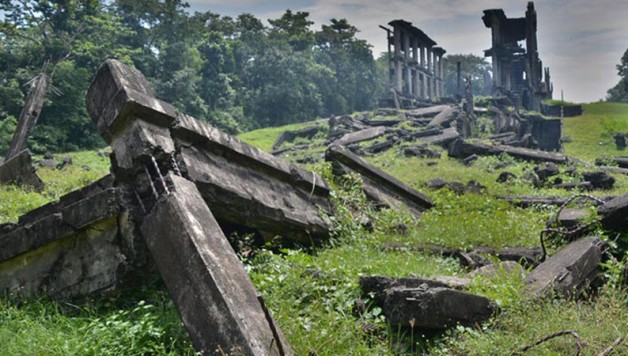 Caught in the Middle of War: The Philippines and WWII

There is definitely a different atmosphere when visiting WWII sites in countries like the Philippines, Singapore, Burma, and the Solomon Islands.  Unlike Japan and the U.S., these countries were not only innocent bystanders, but were the host countries for some of the war’s most brutal fighting.  I am always so interested in how these countries talk about the war, how they treat their WWII sites, and just overall what their memory of the war is like for locals.  Unlike countries who were major players in the war, the Philippines were really just caught in the wrong place at the wrong time.  They had a small army, trained by the U.S., but shortly after Pearl Harbor, when the Japanese invaded the Philippines, the U.S. and Filipino forces were under-supplied and over-matched.  The scene of the American forces last stronghold was an island outside of Manila called Corregidor Island. 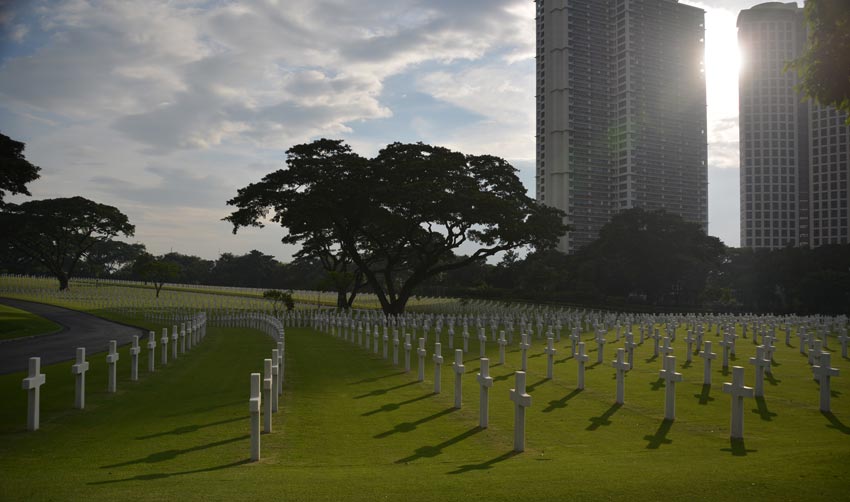 17,206 American soldiers are buried in Manila.  17,206.  There are 23 American military cemeteries on foreign soil in the world, and this one in Manila is the largest by about 3,000 graves.  Today at the cemetery, I am the only visitor.  Alone with so many who gave their lives.  What is amazing about the location of this cemetery is that there are probably eight skyscrapers being built in the neighborhood.  All I can hear is the noise of construction.  I wonder what these soldiers would say about all this construction?  Would they feel proud that their efforts allowed this country to move forward from Japanese occupation?  Or would they claim these buildings would have been built 20 years ago if it wasn’t for the United States decision to return to the Philippines in the controversial 1945 Battle of Manila? 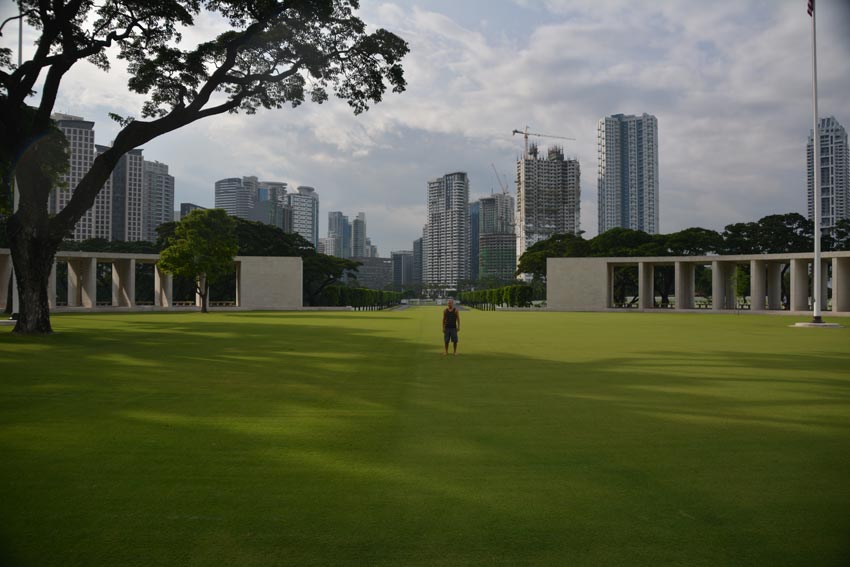 There is a lot of debate on whether or not the United States ever needed to come back to save the Philippines in 1945 from the inevitably-to-be-defeated Japanese.  In fact, the U.S. really only came back to ensure the Philippines would once again be colonized by America after the war ended.  The Japanese were nothing close to a pleasant occupier in 1945, but when the U.S. decided to retake the island, the Japanese became even more ruthless and resorted to causing total chaos and destruction in Manila.  Many of these 17,000 soldiers died when the Japanese invaded the Philippines in 1942 (including the Bataan Death March), but I can only sit here and wonder how many of these lives would have been saved if the U.S. would have left the Philippines alone in 1945 and let the Japanese leave on their own once they were defeated a few months later.

Corregidor Island Then and Now 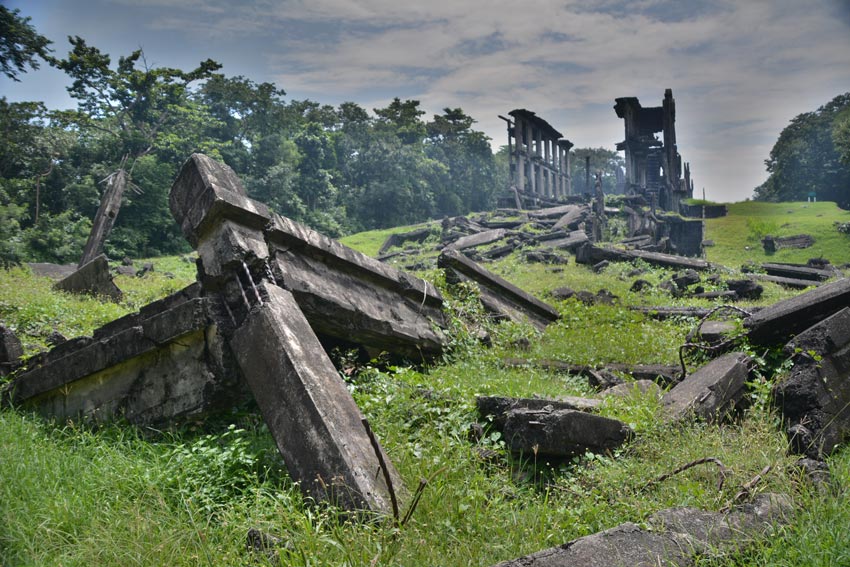 The ruins of Corregidor Island

There are tour packages that you can buy for Corregidor Island, but we have chosen to hire our own jeepney and driver to take us around.  I hate touring WWII sites with groups of people, and although having our own guide is a little more expensive, I feel it is worth every penny.  The island is pretty small (about 4 miles long), and after getting off the ferry and into the jeepney, we reach the first set of ruins within minutes.  I know immediately I am going to like this island!  There are hundreds of ruins scattered all over this island.  Old barracks, military buildings, caves, bunkers, gun batteries, and more.  I could spend days exploring this place.  Check out the swimming pool we found below: 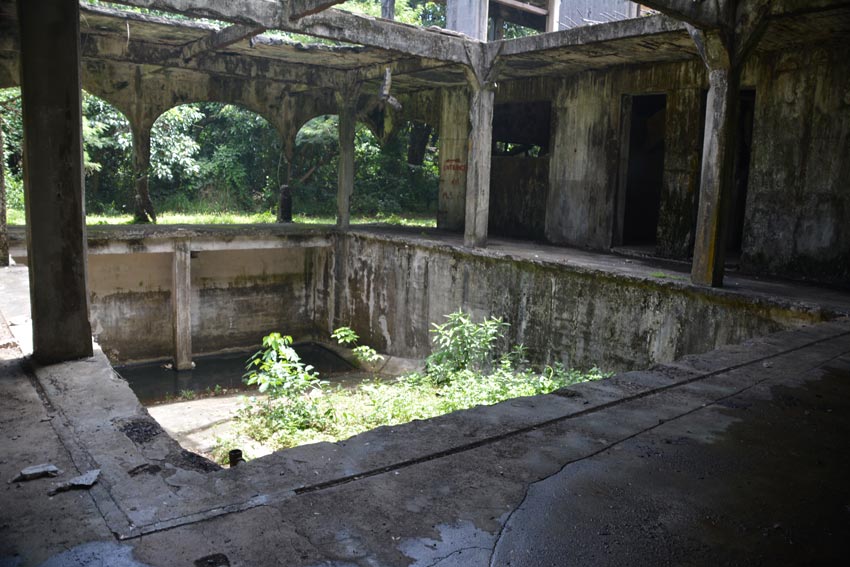 Ruins of an old swimming pool in the U.S. Barracks on Corregidor

Our next stop is at one of the two famous gun batteries, Battery Way.  It is the site of some WWI-era guns that the U.S. used against the Japanese in the first battle for the island.  Many hours into the battle, the soldiers here knew defeat was inevitable, yet they heroically fought until the guns would fire no more. 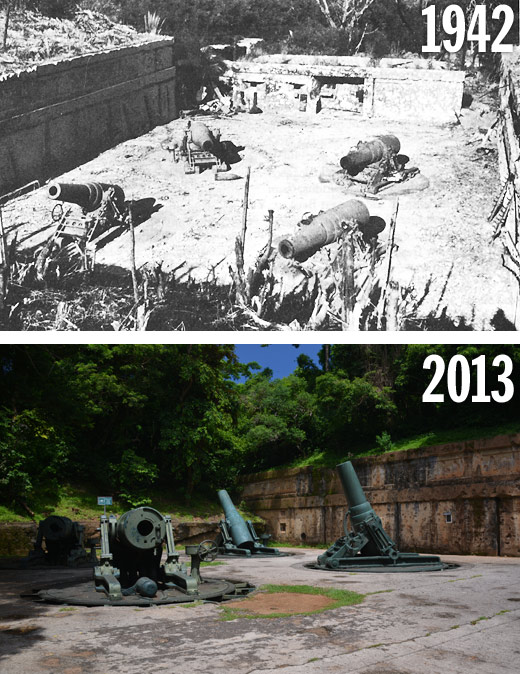 Battery Way: Then and Now

This is when I really enjoy being alone without a tour group.  I think it’s great that these ruins have been preserved on this island, but one thing that really bothers me is when these sites turn into tourist attractions that don’t have responsible guides.  Here we are standing in an old gun battery where men fought and died for the defense of the Philippines and America, and there are 40 tourists taking turns posing next to the guns as if they are props from an old movie.  Teenagers hanging off the side pretending to be shot, etc.  To me, sites like these are sacred, places where people actually died fighting.  In fact the hero of this very gun battery is from Duluth, Minnesota, a few hours away from my home.

Another great relic on the island is the Hearn Gun.  This gun was first used by the Americans to fire upon the invading Japanese in 1942, and then used by the Japanese in 1945 against the Americans who were coming to retake the island.  The Americans finally knocked the gun out of action with strategic bombing, but not before it had caused countless damage to both sides.  Here is a Then and Now shot of the Japanese soldiers celebrating their victory by the gun in 1942: 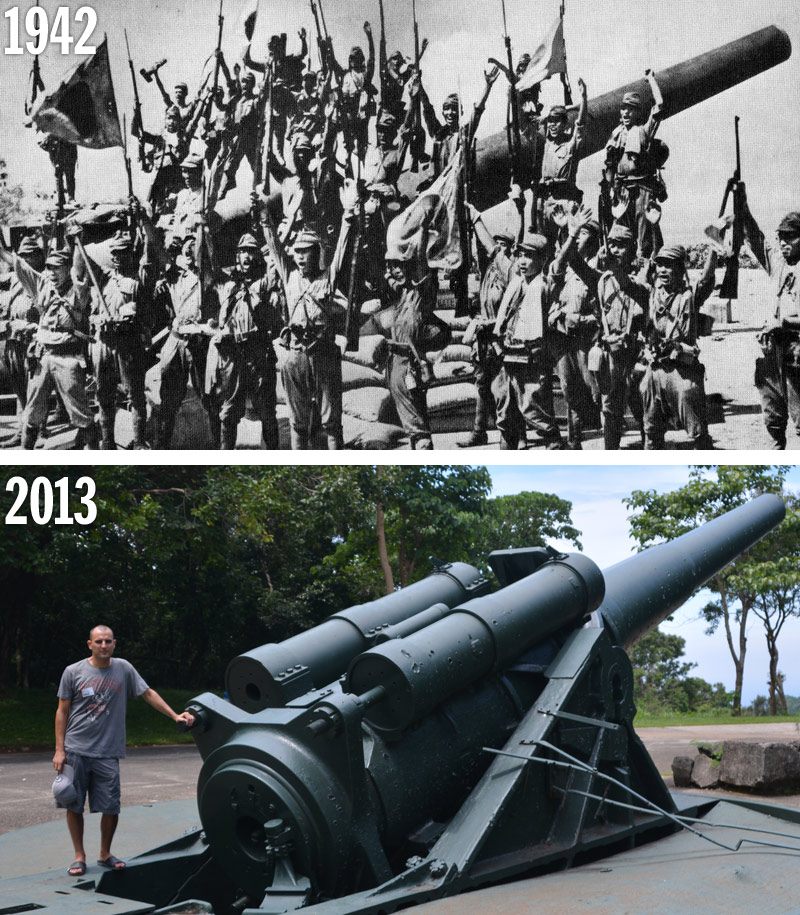 We end up spending eight hours exploring the island, and even that wasn’t enough!  The Philippines government has done an absolutely incredible job preserving this island and it’s history, and other than a few annoying, disrespectful tourists, this island is one of the best WWII sites in the world.  In face, Corregidor Island ranks number two on my WWII historic sites to visit, only behind the Beaches of Normandy. 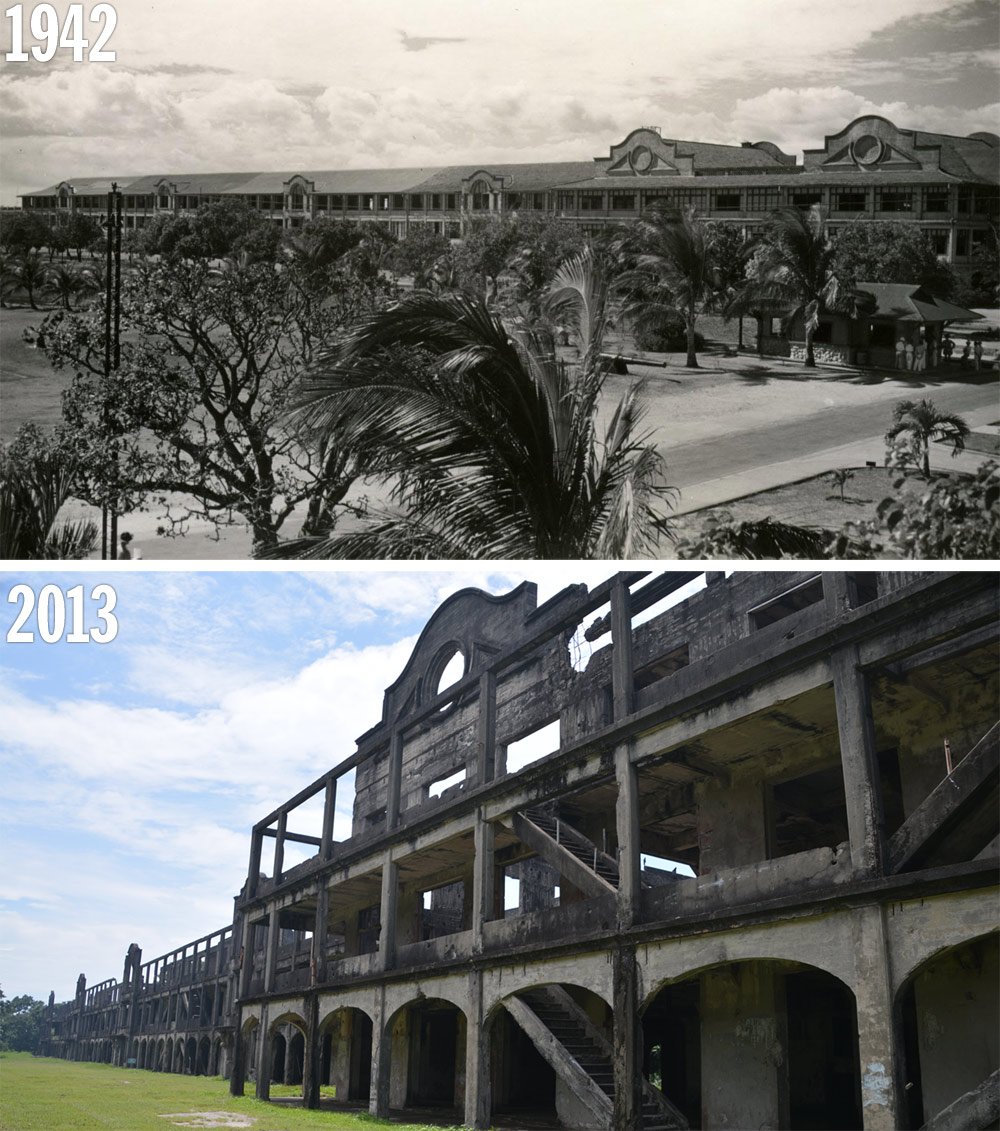 ABOVE: Mile-Long Barracks: Then and Now 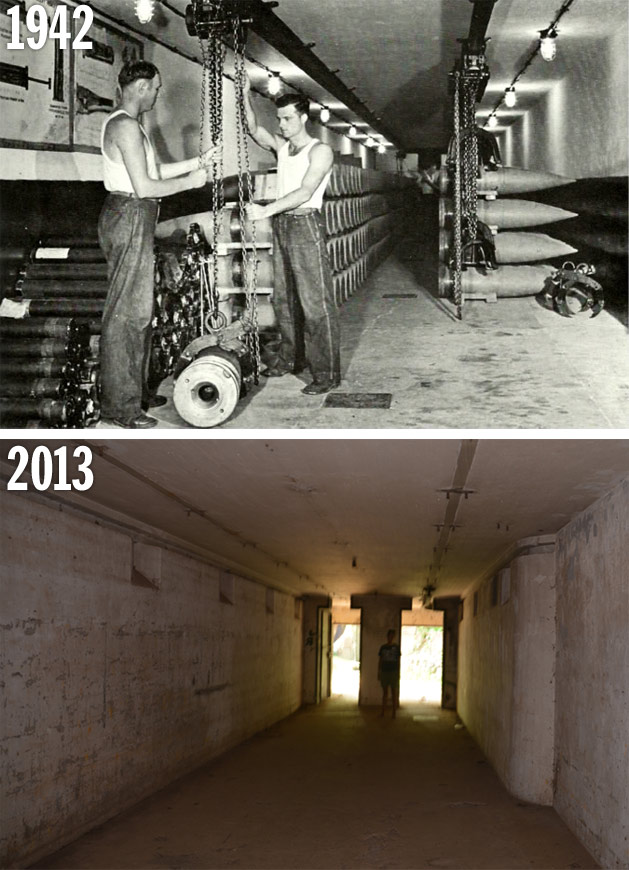 ABOVE: Battery Way Ammunition Room: Then and Now 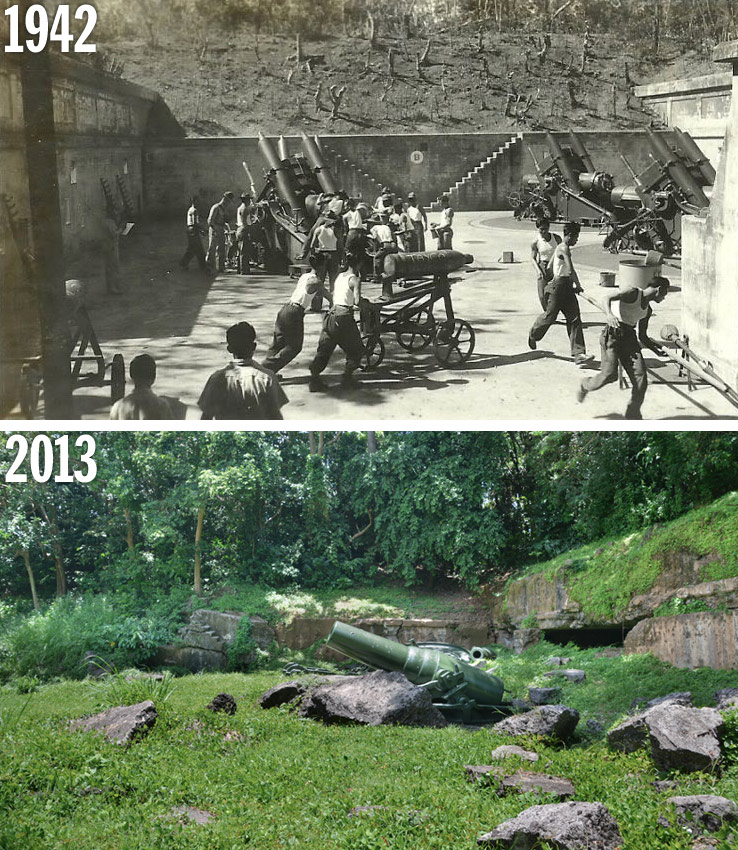 ABOVE: Battery Geary: Then and Now 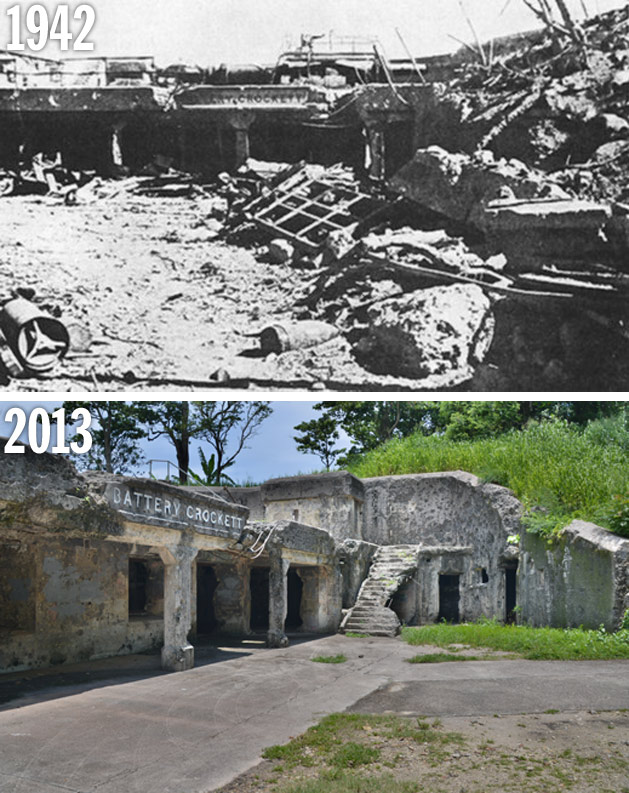 ABOVE: Battery Crockett: Then and Now 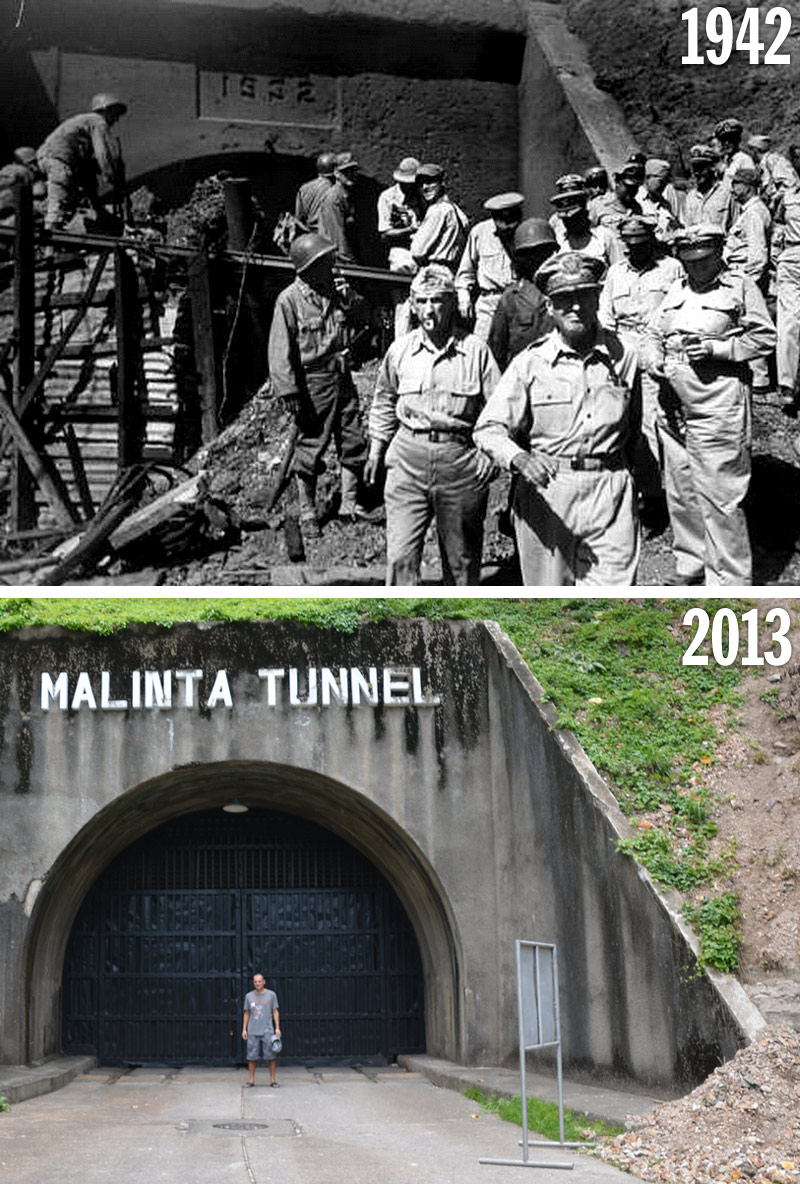 ABOVE: Malinta Tunnel: Then and Now

2 Responses to Caught in the Middle of War: The Philippines and WWII