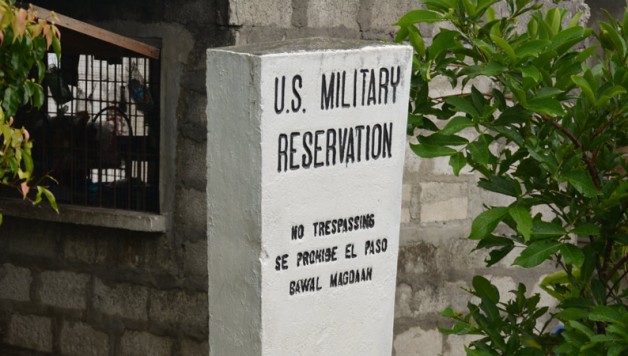 Retracing the Steps of the Bataan Death March

When I was planning our flights in and out of the Philippines last month, I found a really good deal from Manila to Hong Kong on AirAsia.  The flight left from a city about one hour north of Manila, called Angeles City (Clark Airport), and I immediately booked it, jumping at the chance to visit the former U.S. Air Force base there and the Bataan Death March Memorial located another 20 minutes north.

About the Death March

The Bataan Death March was one of the cruelest war crimes committed against U.S. soldiers and is probably the most famous Japanese war crime of WWII.  When the Japanese captured the Philippines in 1942, they forced over 70,000 U.S. and Filipino soldiers to march 63 miles from Manila to a prisoner of war camp (Camp O’Donnell in the town of Capas).  At that time, Japanese soldiers believed surrender was worse than death, 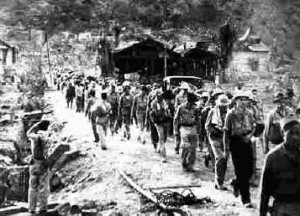 and therefore anyone who surrenders from either side should be treated not as a human, but as something not deserving of life or mercy.  The conditions on the march were unimaginable.  Extreme heat, no water or food, and constant beatings from guards.  When men on the march would get sick or tired, the Japanese would simply kill them; with bayonets, beheadings, sometimes even just running them over with trucks.  Only 54,000 of the 72,000+ that began the march ever made it to the prisoner camp, and thousands more died at the camp itself before the war was over.

The Philippines government, with help from U.S. Veterans, built a memorial on the site of the former prisoner of war camp, and Alissa and I are heading there today to pay our respects and learn more about the horrible events that occurred here.

There don’t seem to be any organized tours in the area that take visitors to the memorial.  I have resorted to asking one of the employees at our hotel if he could take us on his tricycle if we pay him a guide fee and pay for the gas.  He seems excited at the opportunity to be a guide and gladly agrees to pick us up the next morning at 8am sharp.

It takes about 45 minutes to drive from the city to the memorial.  We are riding in the side car of a tricycle and of all the uncomfortable modes of transportation we’ve used, this ranks in the top five.  We barely fit in the side car, and we are taking turns leaning forward since we don’t fit if we sit shoulder to shoulder.  We are also at ground level, taking in clouds of jeepney exhaust fumes with each breath.  By the time we reach the memorial, we need five minutes to just sit and catch our breath before continuing on.

There is a black marble wall surrounding the tower with the names of the Filipinos and Americans that died during the Death march engraved on it.  These are just the names that have been confirmed to have died, and there are numerous mentions also of the many unknown soldiers and citizens who died during those horrible days.  For example, during the march, if a Filipino citizen would hand food to a passing soldier, the Japanese would kill the citizen and take the food. 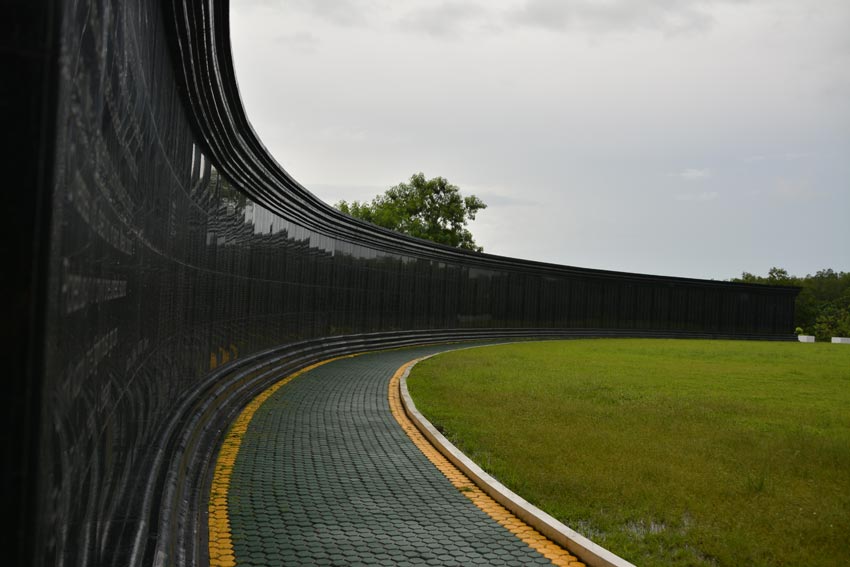 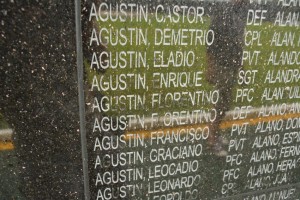 The wall, like so many other similar memorial walls, is just a reminder of the human price of peace.  Although there are American names on this wall, I find myself spending more time reading the Filipino names.  Something about these names interest me greatly.  To get a sense for just how many Filipinos died during the march, you just need to find a common last name.  For example, there were 20 or so Agustin’s that died on this march, including two with an identical name: Florentino Agustin.  So many died in this one march that there are numerous double names on the wall. 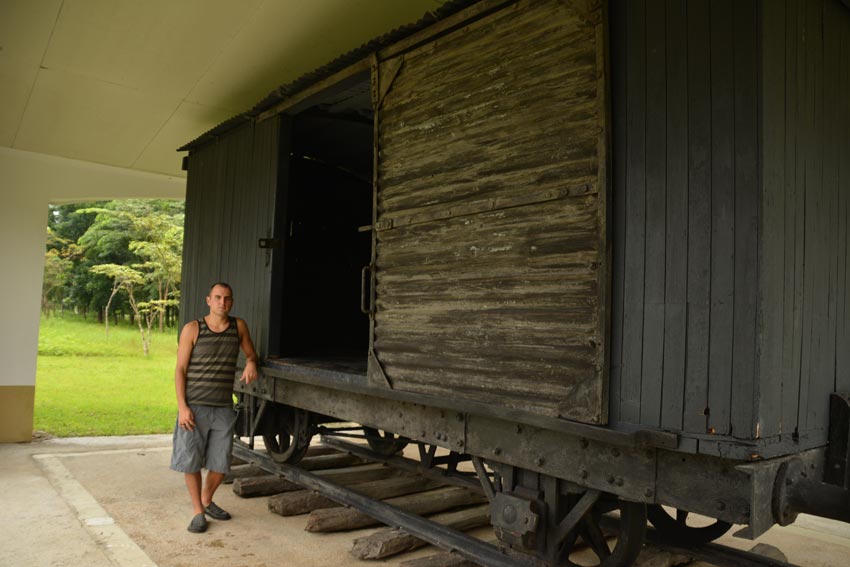 Something new that I learned about the Death March was that after 55 miles of marching, the soldiers were loaded into boxcars for a three-hour hell ride, before being unloaded to march the remaining eight miles to the camp.  I had always thought the soldiers marched the entire way, so this war relic and it’s history was new to me.  It also shocked me.  Soldiers 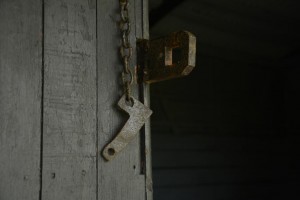 were loaded into these cars with no regard for human decency.  100-150 in each car, packed so tightly that no one could sit down.  Many soldiers were suffering from dysentery, so the three-hour ride involved no ventilation and plenty of human feces and urine.  Reading various soldiers’ accounts from that day will make anyone sick to their stomach.

The only original, remaining boxcar from that day is now on the grounds of the memorial.  The car even has the original lock on it!  Although the car is covered in a shelter, it shows signs of deteriorating.  The door still slides, but it looks like it could fall off any day.  Truly a unique and historical WWII relic that I am so grateful to have seen.

Many people don’t associate American or Allied soldiers with concentration camps, as that term usually brings up the memories and stories of Nazi war crimes.  However, this prisoner of war camp was just that, a concentration camp, one full of suffering, pain, and death.  Of our own American soldiers.  It makes me glad that these former prison grounds are being taken care of.  The area around the memorial is off limits to walking, and it is all wild grassland with many trees planted as memorials to those who died.  When looking off into the distance, it is quite moving to picture it was 70 years ago, as now it is nothing more than grass waving in the wind. 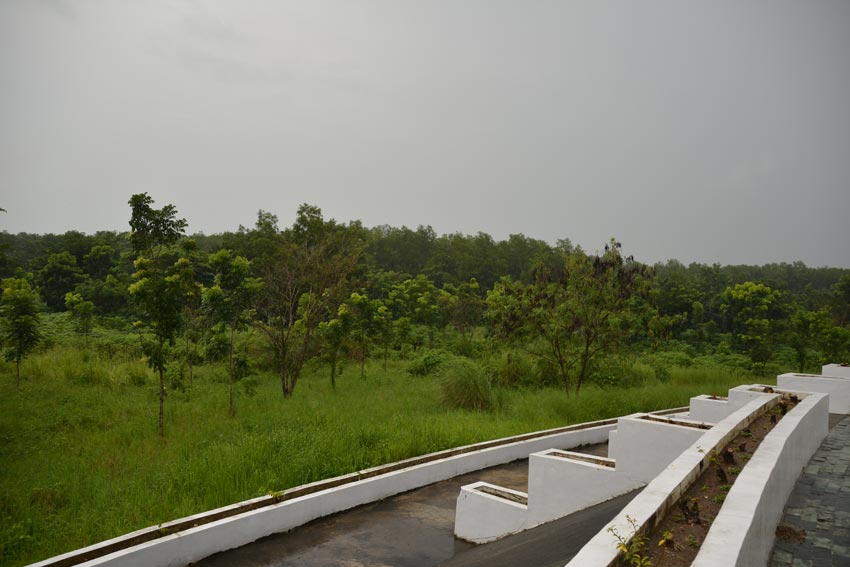 The legacy of war

It is about this time when our guide begins talking more about his own history with the memorial and the war.  He talks of how he would play around the memorial with his friends as children, and how it was not uncommon to find bones of former prisoners.  He then tells me something incredible.  He tells me is part Japanese.  Confused, I ask him to explain.

“My grandmother’s father was a prison guard at this camp in 1943.”

I am speechless, and out of respect, I don’t ask him to elaborate on how or why a Japanese guard became his great-grandfather, or if he’s known/met any of his Japanese relatives.  I can only imagine what the civilian population around the area must have went through during those years of Japanese occupation, and based on his lack of pride in telling me this fact, I can only assume that the relationship between his great-grandmother and great-grandfather was not consensual.

The Battling Bastards of Bataan 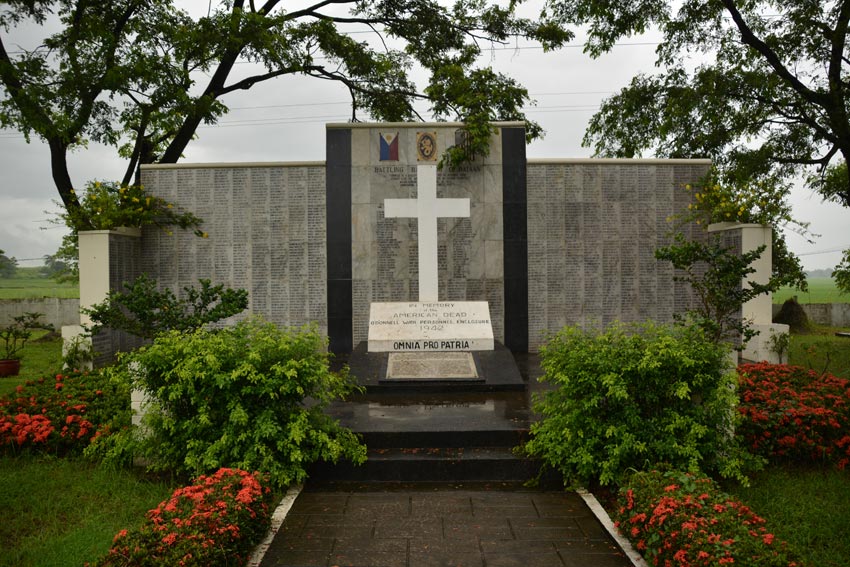 There is also a separate memorial on the site, built by a group of American veterans, specifically for the Americans who died on the march and in the camp.  The term Battling Bastards of Bataan refers to the American and Filipino soldiers who were left on their own to defend the Bataan Peninsula after the American generals had retreated.  The memorial features a replica of a cement cross that was built inside the prison during the war.  The original cross survived the war, and was brought to the United States by some Bataan veterans to ensure it’s survival as a memory of those who died.  It now sits at the Andersonville Civil War Prison grounds in Georgia, at the National Prisoner of War Museum.  We actually saw the original cross in Georgia seven months before seeing it’s original home in the Philippines.  A very cool way to experience history!

Getting to this memorial is not convenient or easy.  It isn’t near any other tourist attractions or major cities.  However, making the trip here was one of the best decisions we’ve made on this trip.  The story of the Bataan Death March is one of the greatest reminders to Americans that Freedom Is Not Free.