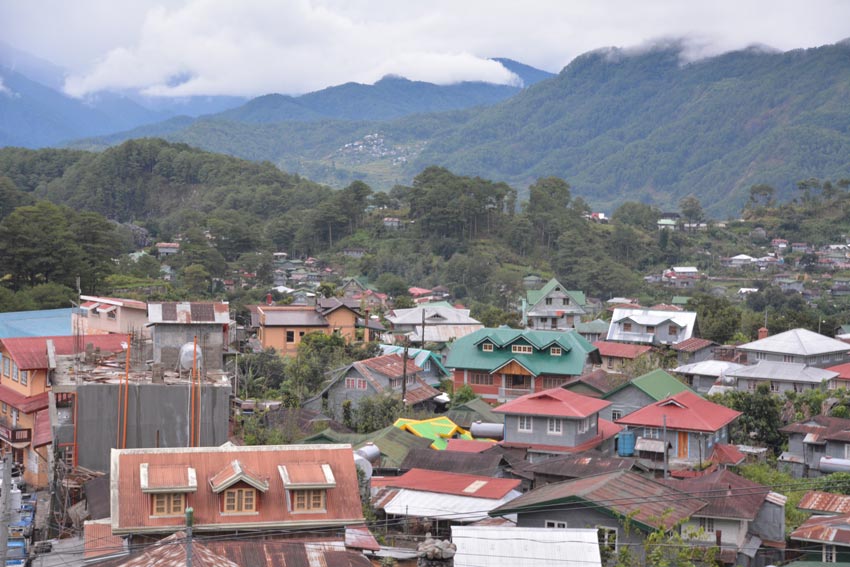 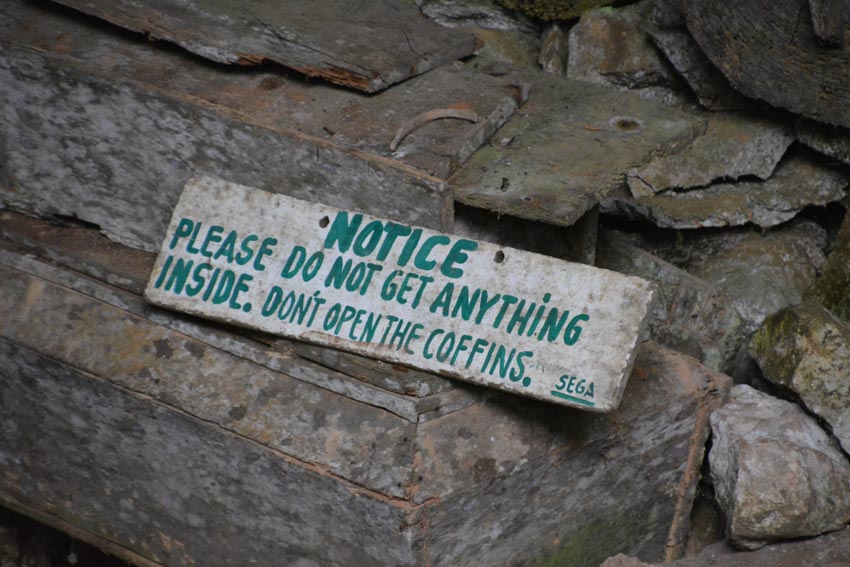 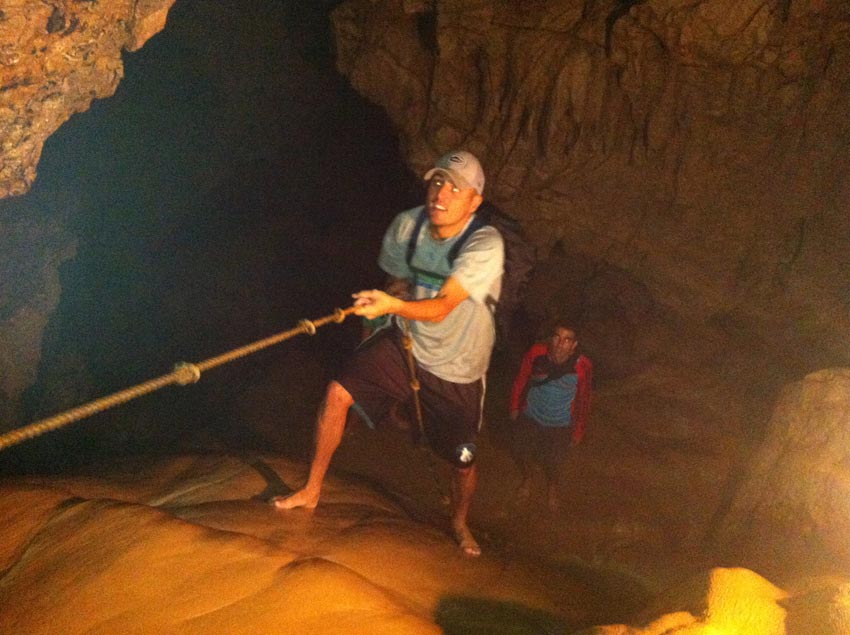 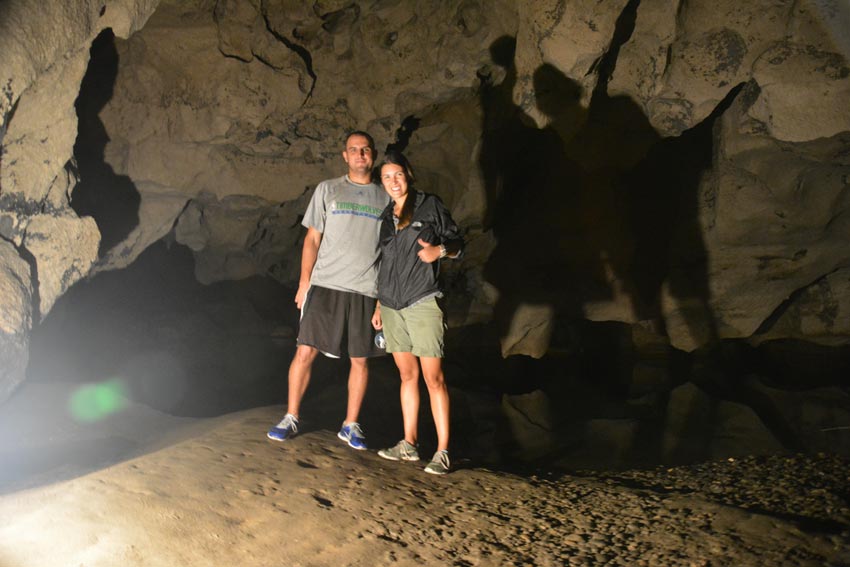 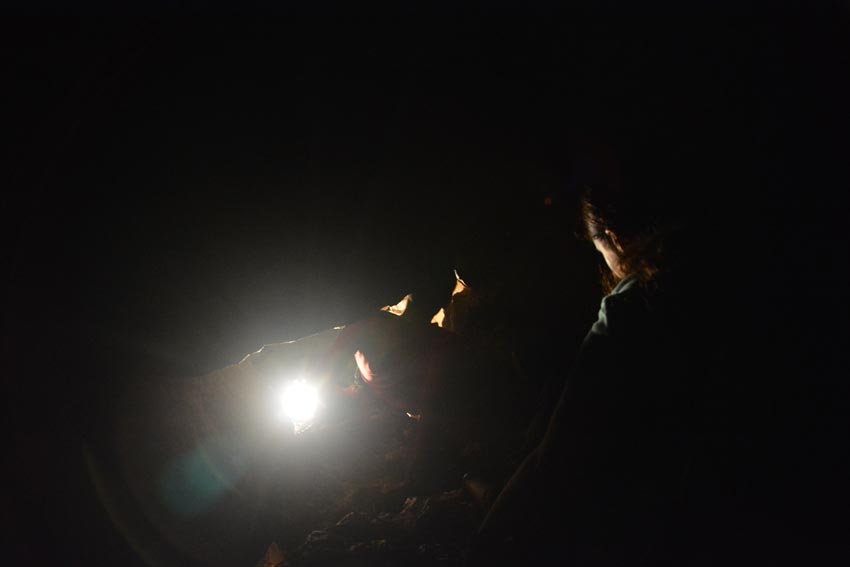 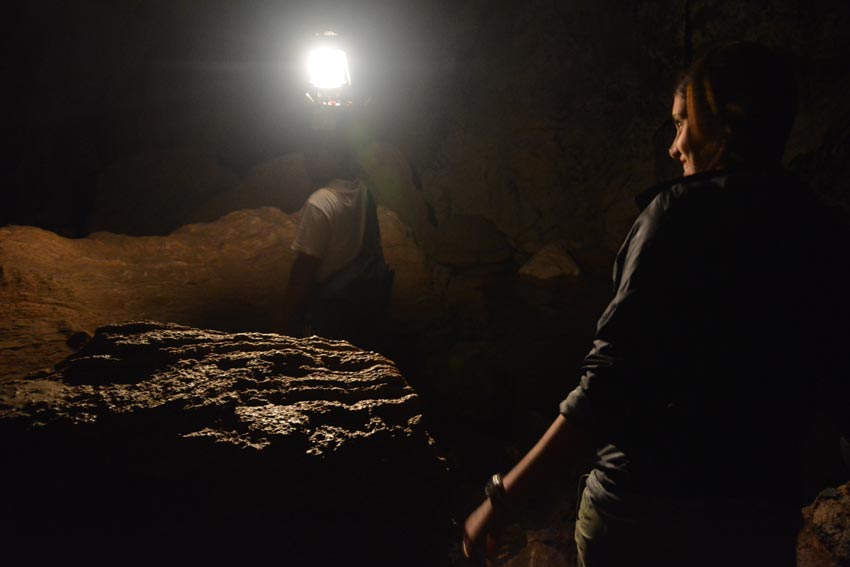 I Survived Sagada – Caving in the Philippines 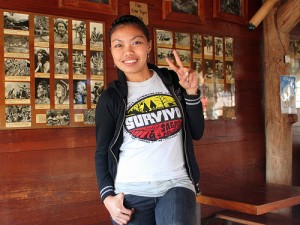 ‘I Survived Sagada’ is apparently the tagline of the small town of Sagada in the Mountain Province of the Philippines. We saw it on many t-shirts in the souvenir shops that line the main road.  The saying was a little too true after our adventure there…(I was going to take a photo when Dan bought one of the shirts, but we forgot, so I borrowed this one.)

We arrive in Sagada from Banaue, on a mini van with a driver who is speeding around the corners of the steep mountain roads, a bit faster than I’m comfortable with. The first thing we notice is the dramatic difference in temperature.  The cold, wet air feels nice after the humidity of Manila, and the rest of our Southeast Asia trip for that matter.  We vow to relax as much as possible in this quiet town. 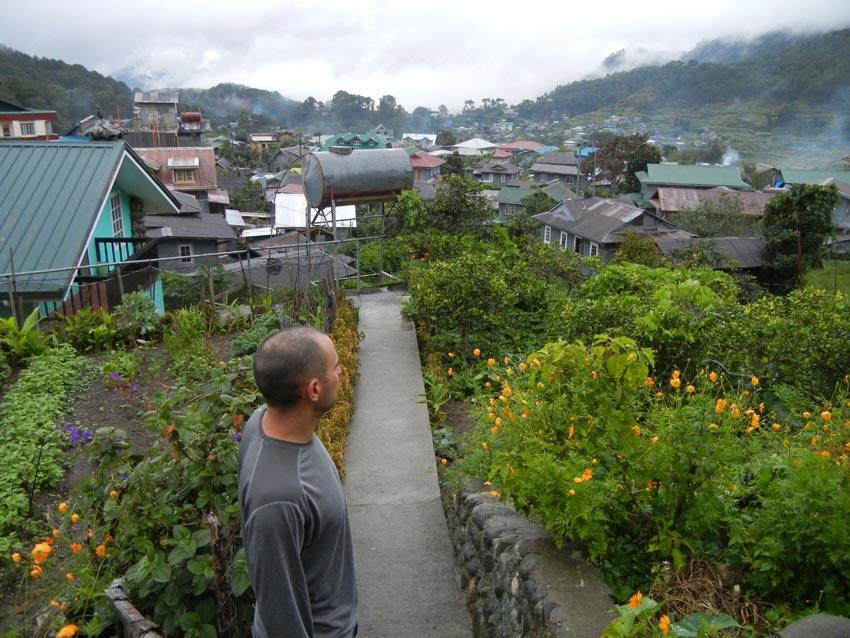 Soon, we do the opposite when we hear about a category 4 ‘Super Typhoon’ heading our way.  We have encountered our share of severe weather, and reading predictions online never helps.  Nevertheless, we google what to expect and become anxious as we read phrases like ‘worst storm to hit the Philippines this year’ and ‘dangerous mudslides likely’.  We prepared to be stranded here for months. As usual, it wasn’t as bad as we expected, and the heavy rains that started that night were reduced to drizzle by noon the next morning.  Just in case, we stayed inside, drank coffee and tea, watched movies and worked on the blog all day.

When we do get around to exploring the city the next day, we enjoy its laid-back restaurants, cafes, and reggae bars, even though they are all nearly empty thanks to the weather.

The Hanging Coffins of Sagada

Sagada is known for two things: Caves and Hanging Coffins.  Up until the 1980’s, locals would hang their loved ones coffins off the side of a mountain in order to be closer to heaven as well as prevent bodies from being taken by beasts.  If there was no room on the cliff, they would simply stack the coffins inside a cave instead.  This has left some pretty interesting landscapes to see in the town, including a few remaining coffins on cliffs, complete with some bones that have fallen through rotted wood. 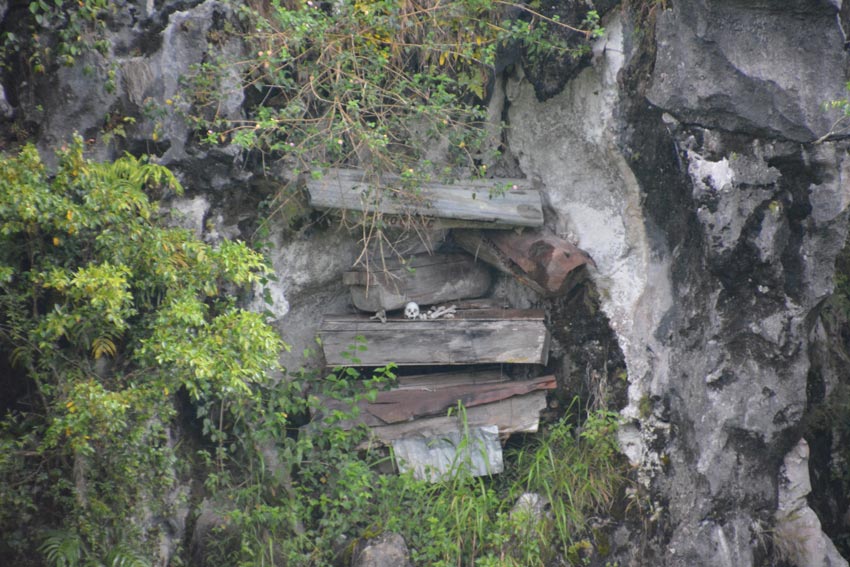 The highlight of week comes the following day when we get back to being adventure travelers and sign up for a tour of the caves that make the area famous.  We join a guide, Deval, and two Americans living in Malaysia, Mark and Jolene, and walk in the drizzling rain to the entrance of the first one, Lumiang Cave. 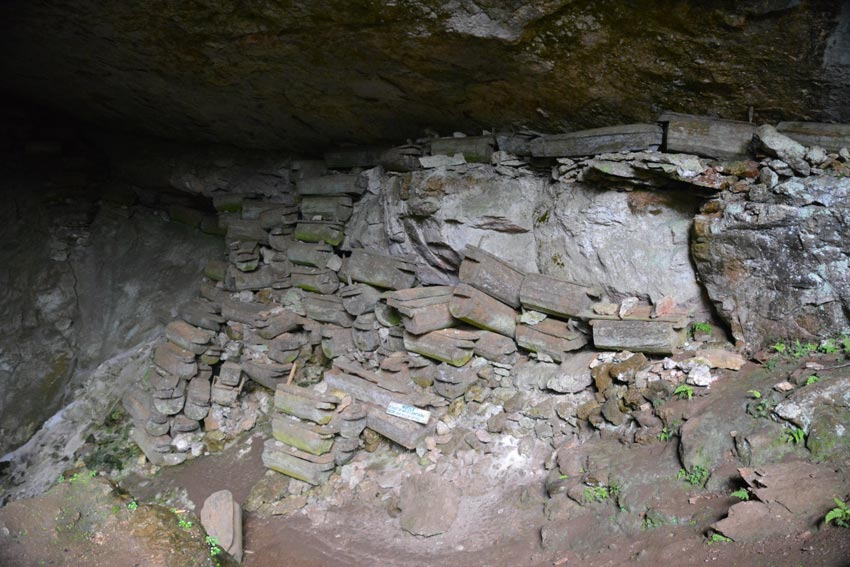 The walls of the entrance are lined with hundreds of coffins.  The coffins are short because bodies are placed in the fetal position, to leave the world in the same way we all come into it.  Some of the coffins and their contents have fallen over the years, and its eerie.

Here we are informed that the short tour we signed up for would leave the cave entrance, walk down the road and go a few hundred meters into the second cave, Sumaguing Cave.  OR, we could live it up and take the 3-hour tour that takes us caving (is it spelunking?) through both caves, because as Deval put it, we are probably only going to be in Sagada once. We exchange questioning glances with our fellow travelers and agree to take the adventurous route. 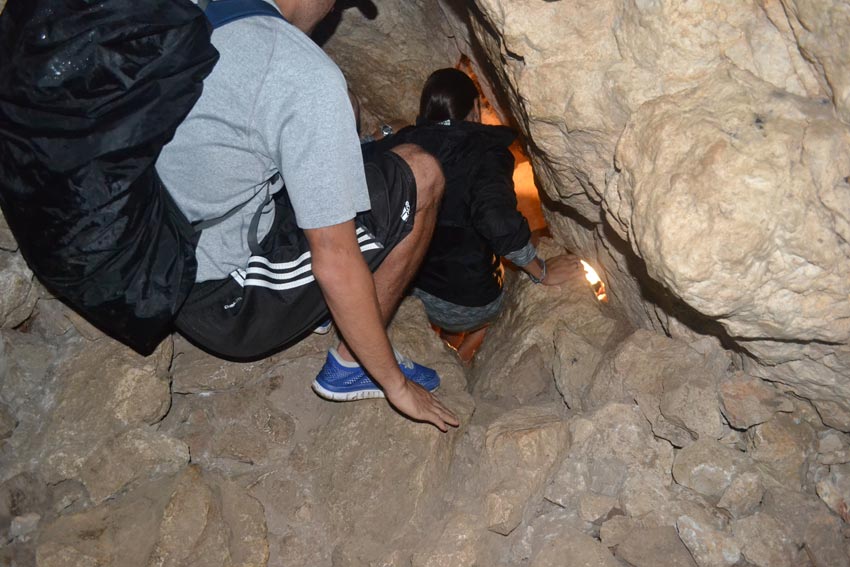 We crawl through dark passage and small holes, descend with ropes, trudge through streams, and remove our shoes to better grip the sandstone parts.  This activity is not good for anyone who is claustrophobic!  Not only are we traveling through small holes and steep drops, but we are constantly heading down.  Deeper into the cave.  In fact, for the first two hours, we only go descend.  It’s very eerie knowing that you are slowly taking yourself deeper into a black cave with only a lantern for light.  A lantern that our guide decides he wants to casually balance on his head!  See picture below. 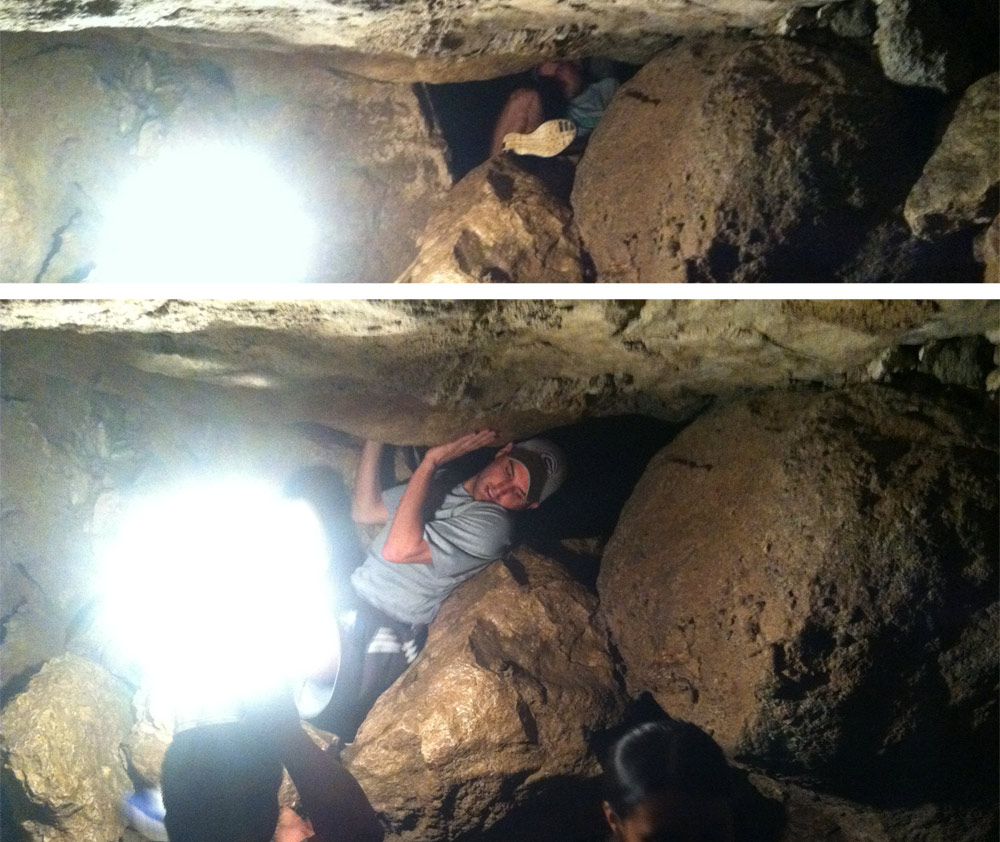 The ancient rock formations are breathtaking throughout, though the photos don’t do them justice.  The most incredible sight for me is the fossils of shells in the cave walls, a reminder that this entire city, now at an elevation of over 5,000 feet, was once underwater with the rest of the world as we know it.  Crazy.

One of the coolest spots we come across is a natural pool, that we see when we are at one of the lowest spots on the descent.  It actually looks more like a hot tub than a pool, but it of course is freezing. 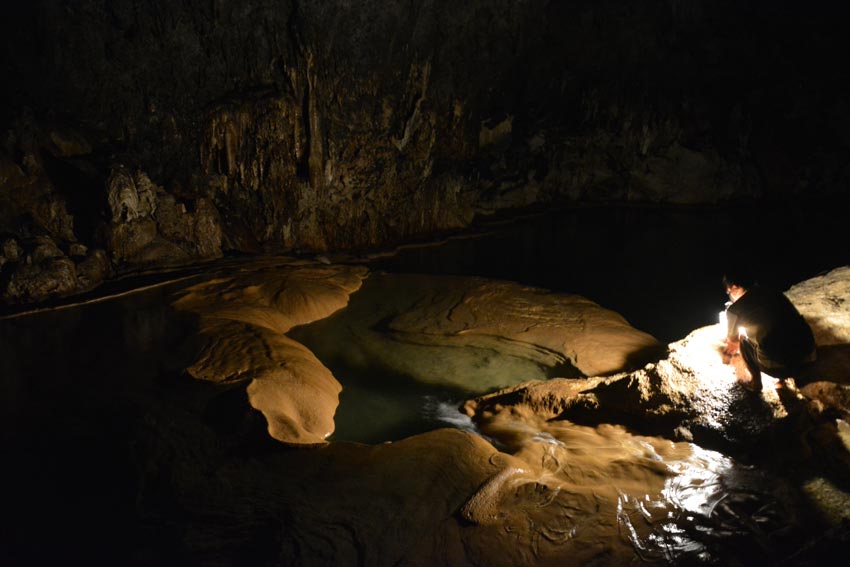 We survive the tour (with more than one comment about how this dangerous activity, only supervised a guide with flip flops and one lantern, would never be allowed in the US) and make it back to town just before dark, very happy with our decision to take the adventurous path.

I recently learned that another tour group wasn’t so lucky.  A part of the cave collapsed due the heavy rains and 13 Japanese students had to be rescued from where they were trapped inside!  We were lucky, but just another reminder to be careful everywhere, even tours that have had no problems in years.

One Response to I Survived Sagada – Caving in the Philippines