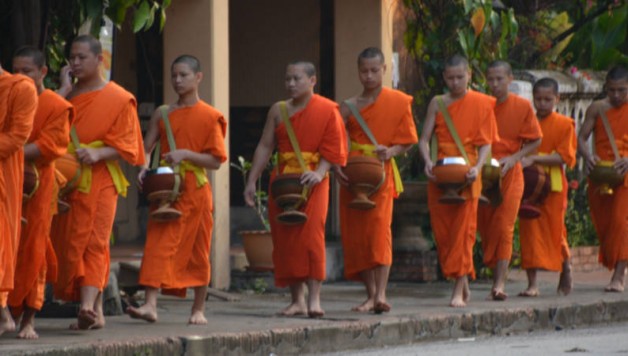 After a few days in Vientiane and a weekend in Southeast Asia’s former party mecca, Alissa and I have headed north to Lao PDR’s famous mountain town, Luang Prabang. We have mixed expectations about this town.  For one, we really enjoyed our time in Ubud, Indonesia, which we have heard shares a similar “vibe” as Luang Prabang.  Both relatively the same size in population, Ubud is known for its abundance of Hindu temples and Luang Prabang its abundance of Buddhist temples.  On the other hand, we have also heard some pretty negative things about Luang Prabang, mostly that its suffering from too much tourism, too fast (another similarity to Ubud by the way).

It’s the can’t miss attraction of the city.  It happens every morning at dawn, and it’s called Alms.  The ritual where the monks from the hundreds of nearby temples march silently through the streets to collect food from locals who present it to the monks as a holy offering.  Sounds cool right? I’m sure that’s what the first few tourists thought when they’d stumbled upon this daily ritual years ago.  Here’s the problem. It’s now slowly turning into a circus, and in doing so it’s embarrassing the locals who participate, and worse, it’s degrading and humiliating the monks.

Locals wait patiently with to give monks their alms of steamed sticky rice.

When we first decided to come to Luang Prabang, I admit part of the reason was because we thought it would be awesome to watch monks walk single file, in complete silence, through a beautiful town lined with temples, mountains, and rivers, all during sunrise.  Alms would be great if it were just that, but there has been another element added to the mix recently.  Tourists.

Yes, I know I’m a tourist, and I haven’t fooled myself into thinking I’m some high level traveler who doesn’t do touristy things.  However, there’s a difference between responsible tourism and irresponsible tourism, and it has nothing to do with how often you travel or where you travel, but has everything to do with respect.  Respect of locals, nature, and fellow tourists.

It is near impossible to read an article or guide online without seeing “Do’s and Don’ts When Watching or Participating in Alms”:

– DO watch at a respectful distance (i.e. across the street)
– DON’T take close-up pictures and videos of the monks, and don’t use a flash.
– DON’T wear revealing clothing, especially women.
– DON’T participate in the ceremony (give rice to monks) unless you understand what the ritual means to Buddhists, and definitely don’t give them the rice being sold by the vendors.

The 6am Tourist Cluster

There’s more the just the tips above, but those are the big four.  All four are easy to understand, even easier to follow, and like I said, it would be near impossible to have heard or read about alms without hearing at least these four things.  But here we are, at 6am, watching tourist after tourist act as if they don’t know any better.  The first thing I see is an overweight man running down the street with his Sony DSLR camera to catch up to a young monk, maybe 6 years old, in order to take a picture of him from the front at about four feet away. Right in his face!  Then as I’m disgustingly watching a twenty-something “broski” snapping picture after picture on his iPad of an elderly women on her knees praying, I notice a girl walk by wearing a revealing sundress.  As I turn back around, I notice another DSLR women and her zumba-wearing iPhone friend finish off the paparazzi close-up photo gauntlet. 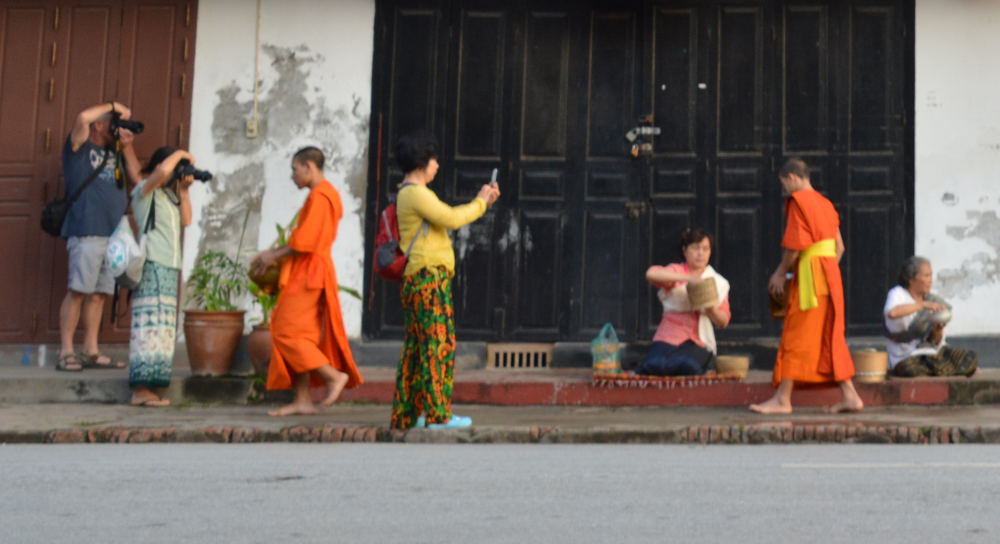 Morons come in all shapes, sizes, and races.

These are people who are ACTIVELY deciding to disrespect this ceremony.  They didn’t randomly stumble upon this ritual and unknowingly take a ride photo or dress inappropriately.  They read the same guidebooks and tips that I did, so they have just decided to be selfish assholes instead. Sorry Mom and Dad, there isn’t a better word to use.

Some Laotian people are even contributing to the problem.  There are tour guides selling “Alms Tours” where they bus 15-30 tourists onto one of the main streets, set up baskets of rice for each one, and allow them to give alms to the monks. 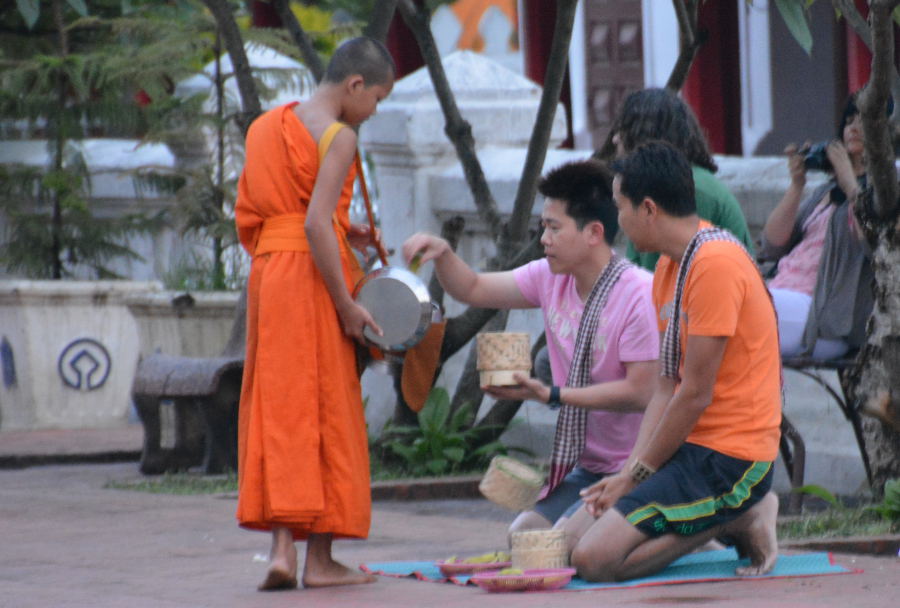 You can always spot which are the tourists because they have brand new baskets and matching scarves that are provided by the tour groups. Notice their friends in the background photographing up close as well.

Could you imagine if a tour company in the United States or Europe allowed people to buy a ticket that included a seat in the front pew of church and participation in communion? And those people who came on the tour were taking close-up pictures of the priest, the young acolytes, and congregation during the service?  Imagine they were also dressed inappropriately, and basically ignored the fact that there was a church service going on.  I can guarantee the congregation would feel uncomfortable, and the priest would kick them out and not allow them back.

Yet here we are, and in essence that is what’s happening here.  How would that DSLR guy feel if somebody ran up the pew to his son to snap a close-up of him acolyting?  Just like the elderly in many Christian churches, that lady praying and being dissed by the iPad bro is just trying to go about her spiritual ritual that she believes necessary to her life.  How would that jerk feel if someone put an iPad in his face while he lip-sang hymns on Easter Sunday?  As for dressing inappropriately, my analogy doesn’t work as well, as I see many Green Bay Packers jerseys in church nearly every Sunday in the Fall.  As for the monks, just like priests would take action in a church, the monks have actually attempted to stop the rituals within some temples because of the unwanted attention.  The city then threatened to hire locals dressed as monks to “stand-in” in order to keep the tourists flocking. 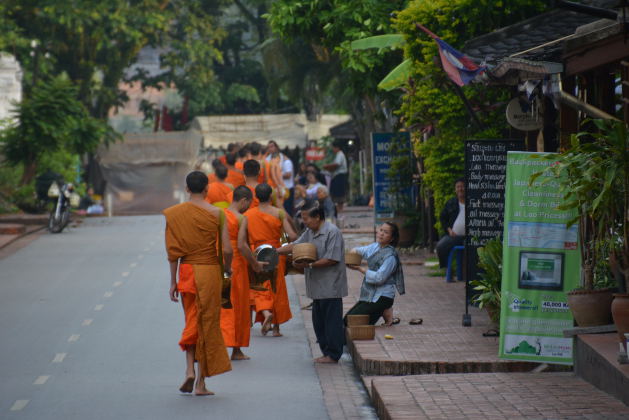 I’m sure these monks haven’t always had to walk past the Money Exchange during alms.

Now, as the tourist crowds grow bigger each morning, this town finds itself in a tough situation.  Education isn’t the issue.  Like I said, EVERY guide book makes it clear to be respectful. I know what I would do:

1. Ban people tourists and non-Buddhists from participating.  The monks keep a pretty straight face throughout the whole morning, but when they reached the string of six tourists kneeling in a row, I could see a change in their body language.  Like a subtle eye roll mixed with a thought “these people are idiots”.  If foreigners insist on participating, there should be a mandatory classroom session teaching them what it is they are actually doing in the ritual and what role they are playing.

2. Hire locals to roam the city each morning nicely reminding people to be respectful. Call them the “Luang Liaisons” , give them matching shirts, and when they see someone being disrespectful, they will walk over and ask them to be mindful.  Solving problems AND creating jobs.

As angry as this ceremony made me, I don’t want to deter people from coming to Luang Prabang.  This city has so much to offer, and the alms ceremony can still be great.  Just make sure you follow the simple guidelines, and maybe even watch on a street a few blocks from the main road where there are fewer monks, but also much fewer tourists to ruin it for you and the participants.

I’ve never spoken with a monk.  I want it to be clear that my opinions on what THEIR thoughts are based off my research, articles, and interviews with locals and other tourists.  Do all monks want to stop this ritual? Of course not.  Some may even enjoy what it’s come to and prefer a crowd at 6am instead of silence, who knows.  I can tell you that the photo below was taken out the back of a tuk-tuk at 6:00am in Vientiane, the bustling city 11 hours south of Luang Prabang.  The street was noisy, dirty, and the air was extremely dusty.  These monks had to walk at least twice as far to find locals still participating in the ancient ritual.  They make the tourist problem that the monks in Luang Prabang put up with look like a piece of cake.  We even saw a monk standing in a noisy morning market in Bangkok looking for alms gifts. Which would you rather do? 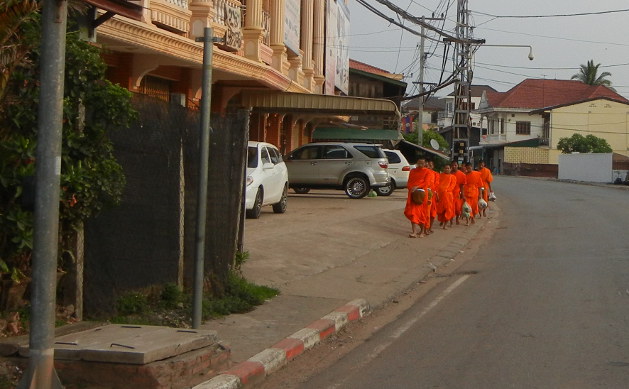 If you’re curious what the tourist hotspot looks like during alms, here is a video I found on YouTube of tourists in Luang Prabang ruining the ancient ritual: