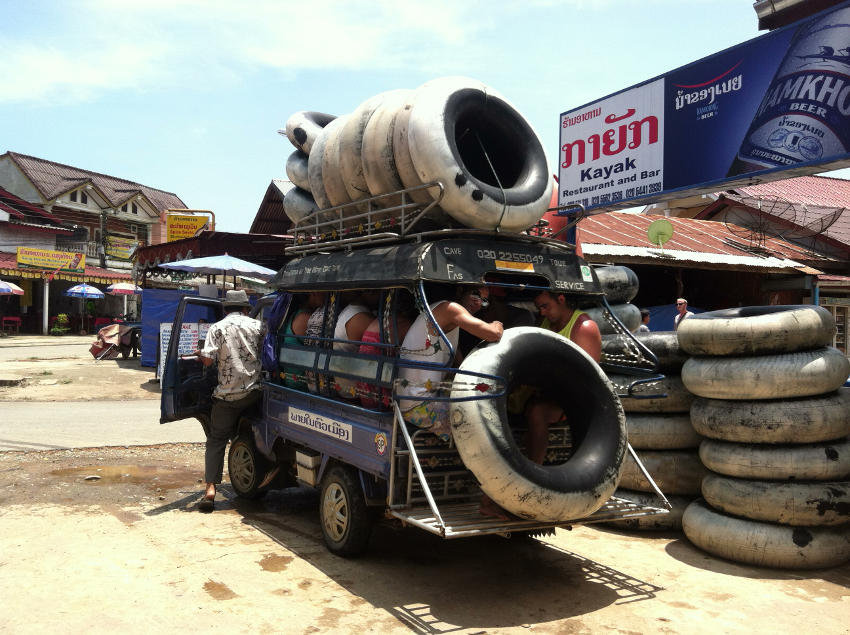 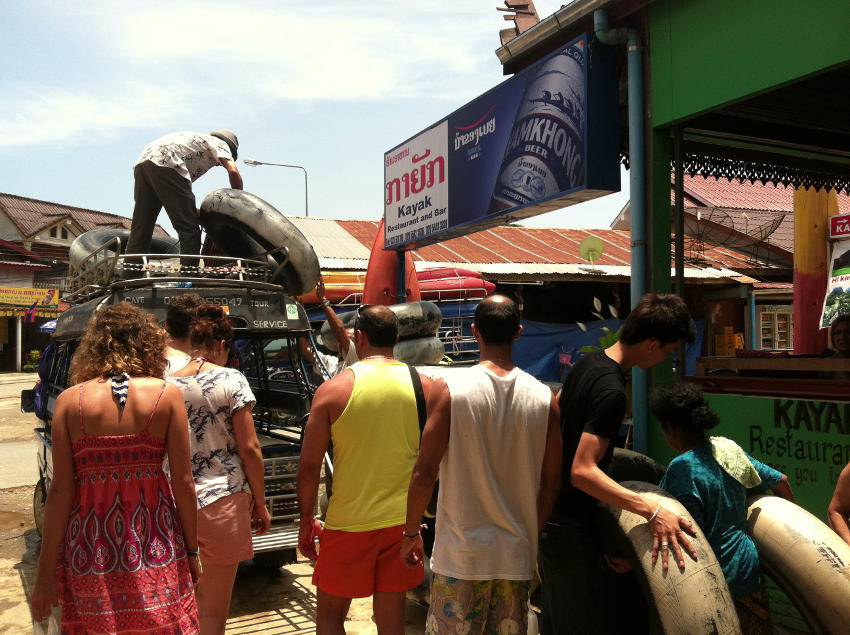 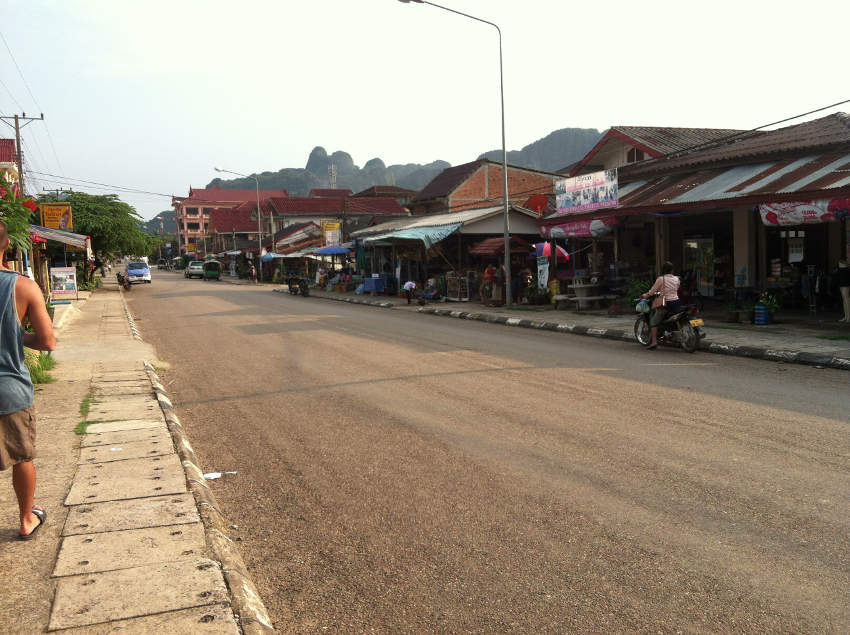 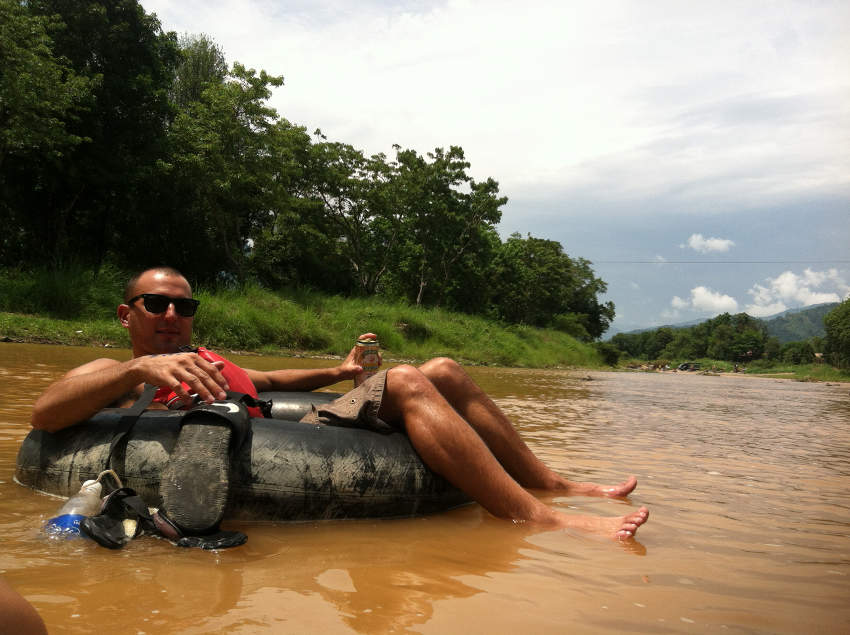 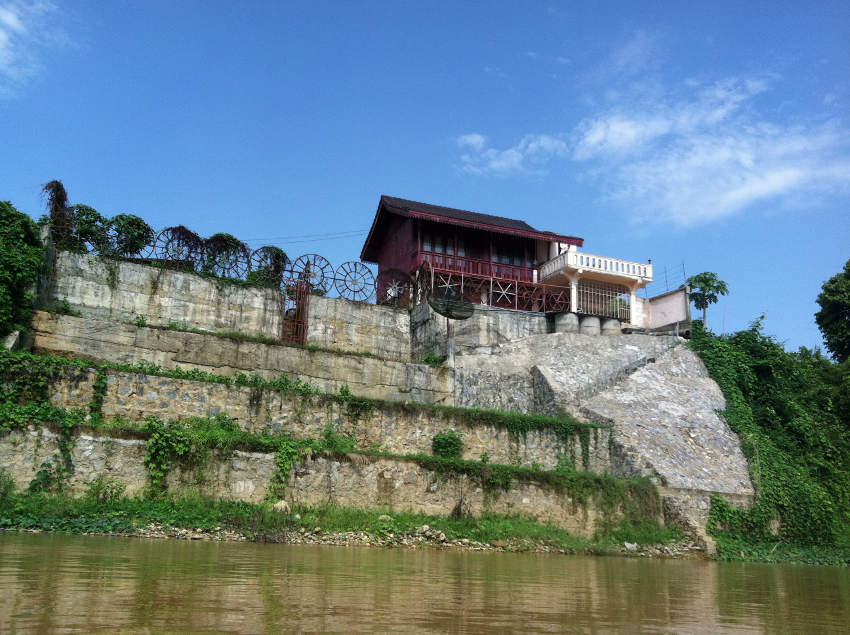 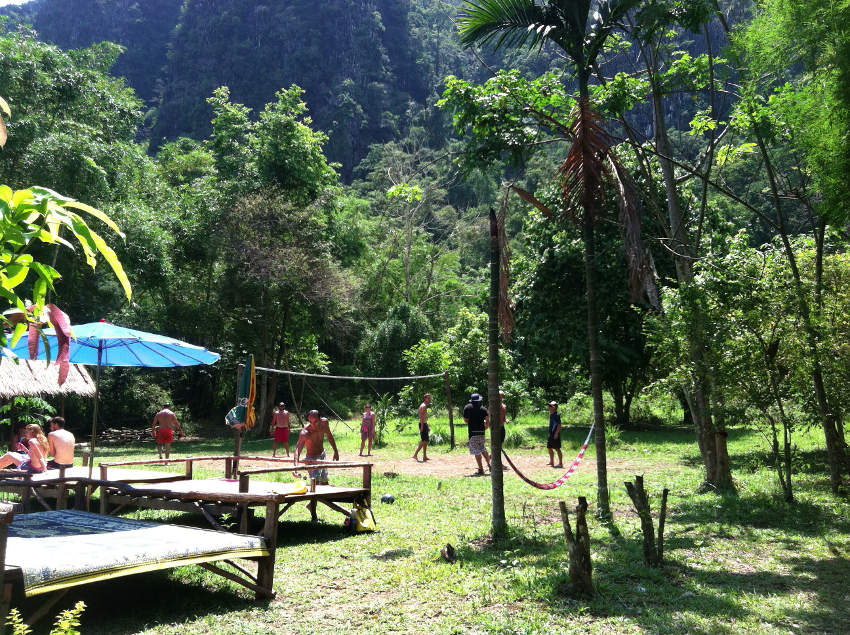 Party Town Ruins: Vang Vieng Before and After

Two years ago, Alissa and I were in El Nido, Philippines, and while on an 8-hour boat ride in the South China Sea we met a couple from Seattle who were on an extended SE Asia backpacking trip.  They even had the “Southeast Asia on a Shoestring” Lonely Planet book, so they must have been the real deal.  I got into a conversation with them about where they’ve been and where they’re headed next, and all they could talk about was some city in Central Laos that I had never heard of.  Vang Vieng.  A town with no rules, run by 19 year-olds.  I immediately added it to our to-visit list.  Fast forward a couple of years, amidst rumors that the party scene has been shut down, we have made our way to Vang Vieng for three days to see just what shape this town is in.

In the early 2000’s, this city started renting tubes to tourists so they could float down the nearby scenic river.  Within a few years, the river was lined with bars, dance-floor piers, slides, ziplines, rope swings, you name it.  Then in the town, party bars, hostels & boutique hotels, tuk-tuks, tour companies, and pizza restaurants began popping up everywhere.  Vang  Vieng soon became the mecca for backpackers from all over, and a backpacking trip through SE Asia was incomplete without a stop here.  There were no rules or laws enforced, especially on the river itself.  Locals built shotty-looking water slides, swings, and platforms to try and lure drunk backpackers into their riverside bars, and inevitably things began getting out of control.

Lao people are very conservative in how they dress and how they act in public.  They don’t wear skimpy clothes, they don’t act immaturely to strangers, and they don’t appreciate it when others dress and act inappropriately either.  That makes it all the more unbelievable that this area of the world would host such an extravagant showcase of young drunk people wearing next to nothing acting stupid.  Because of this, Vang Vieng was often called “the world’s most unlikely party town.” 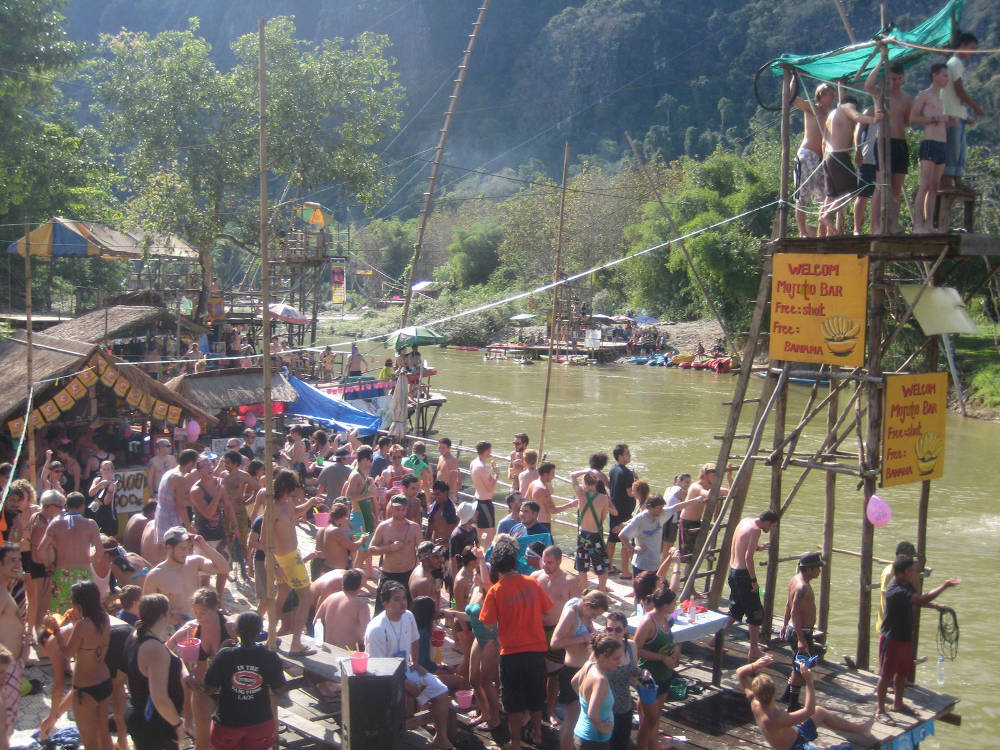 In 2011 alone, 27 tourists died in Vang Vieng.  Drowning, landing on rocks, drug overdoses, were the most common causes, and with such poor health facilities in the town, there is no doubt some deaths can be attributed to poor care after an accident.  As the deaths and serious injuries to foreigners began again in early 2012, authorities from countries such as Australia, where a high proportion of the victims were from, finally pressured the Lao government to take action.

In August 2012, Laotian officials agreed and said enough is enough.  They came into Vang Vieng and shut down all the bars and contraptions on the river.  News spread quickly among backpackers, and as the party scene disappeared, so did the they.  The town needed to evolve, and quickly.  Tubing was allowed again after the bars were taken apart, but it is now a much quieter, relaxing atmosphere.  Three bars have re-opened on the river, but they are at the very beginning of the three-hour float, and are nothing like before.  Just a few picnic tables and a volleyball court.

As we floated the river today, we took some pictures of some of the former hot spots on the river to give you a before and after visualization:

The former Slide of Death is completely gone. As are all the surrounding villas that were once filled with boozing backpackers.

There are countless old foundations along the river that add a spooky element. Former ziplines and jumping platforms that are now just eye-sores, ready to be completely removed. 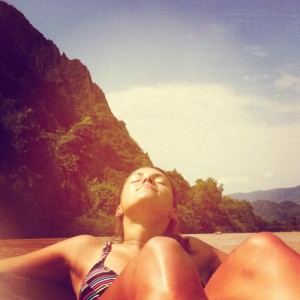 The bars on the river were forced to close, but the bars in town have remained.  They are tamer than before, especially during the day, but they still have a great feel to them, and as one bartender told us: “It’s nice to meet people at night who can still remember who you are the next day.”  That is a theme we have heard a lot these past two days.  Many people like the new Vang Vieng more than the old version.  Nobody liked having two people die each month, and many of the veteran expats here have personally seen 4 or 5 deaths each.  That gets old fast, and you can see they are authentic when they tell us they like it better now.  I have a feeling that when these 20-25 year olds grow older, they will look back on their time spent here and regret the part they played in the deaths of so many of their fellow travelers.  Lives lost in the pursuit of a party paradise.

For the travelers who still want to get wasted, Vang Vieng still delivers.  There are still $1 beers everywhere and many of the restaurants still have happy menus (you just need to ask for them now.)  Be warned though, Lao police officers do not like people smoking marijuana on the streets and hand out $600 USD fines for anyone caught with drugs.

Something that had always been overlooked by these young backpackers was just how beautiful the area is around Vang Vieng.  The black limestone cliffs that hover over this town create are surreal, and there are many other hidden caves and lagoons that can be visited nearby.  Eco-tourism and adventure tourism shops have opened all over the main street promising exciting trips to these unexplored areas.  Kayaking, camping, rock-climbing, cave exploration, you name it, are all on the menu.  They are popular too.  During our tubing ride, we were passed by at least 20 kayaking groups. 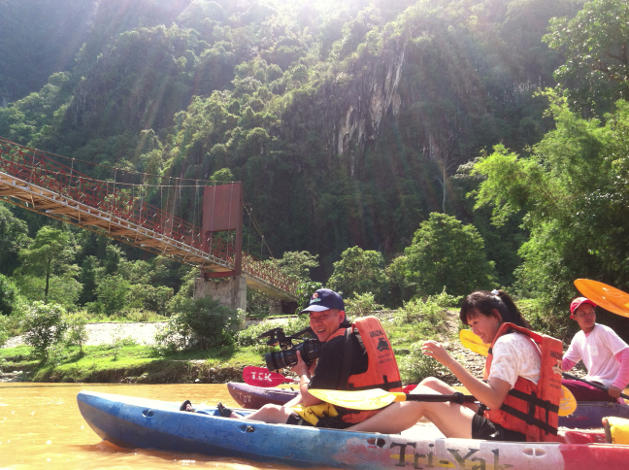 The tourists are also now much more diverse.  It is no longer just young backpackers that come here.  We saw hundred of Japanese, Korean, British, Australian, Israeli, Americans and many more, whose ages varied from 19 to 70.  However, although the tourists are growing in diversity, they are definitely NOT growing in numbers.  There was an immediate drop in number of tourists arriving after the crack-down, and the amount arriving daily is staying pretty flat.  The signs of a steep decline are everywhere.  Half-built hotels that are now abandoned line the outskirts of the city and guesthouses and bars never seem more than half full.

Although people aren’t coming here in the large numbers as before, the location of this town will keep the tourists flowing through for years.  It is a perfect stopping point between Vientiane and Luang Prabang.   We had a great four days in Vang Vieng and met a lot of great tourists and locals.  The vibe is still laid back and relaxing, and most importantly people are no longer dying here.

But one question still remains… Where will the next Vang Vieng be?

13 Responses to Party Town Ruins: Vang Vieng Before and After