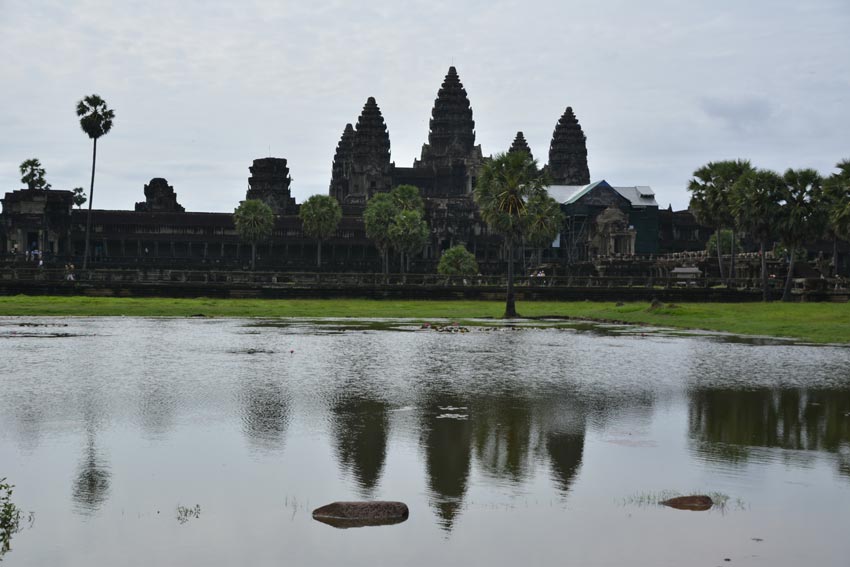 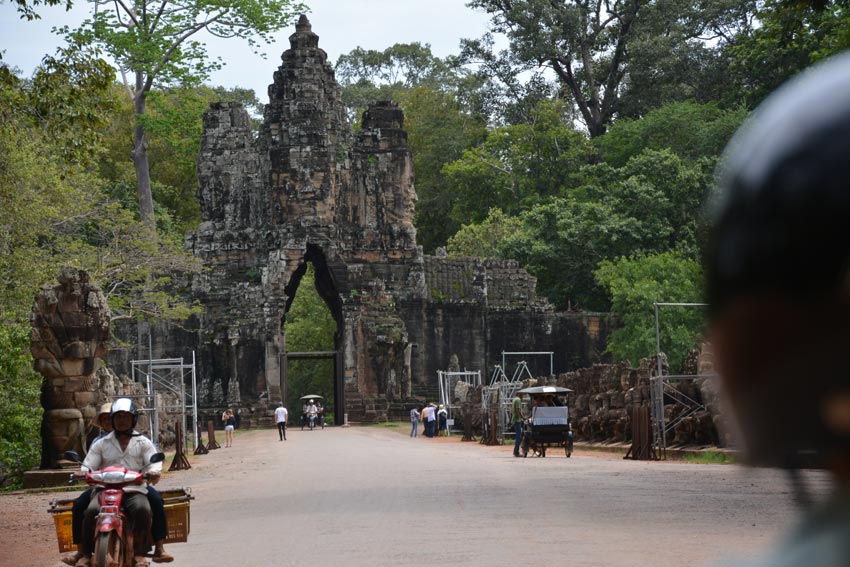 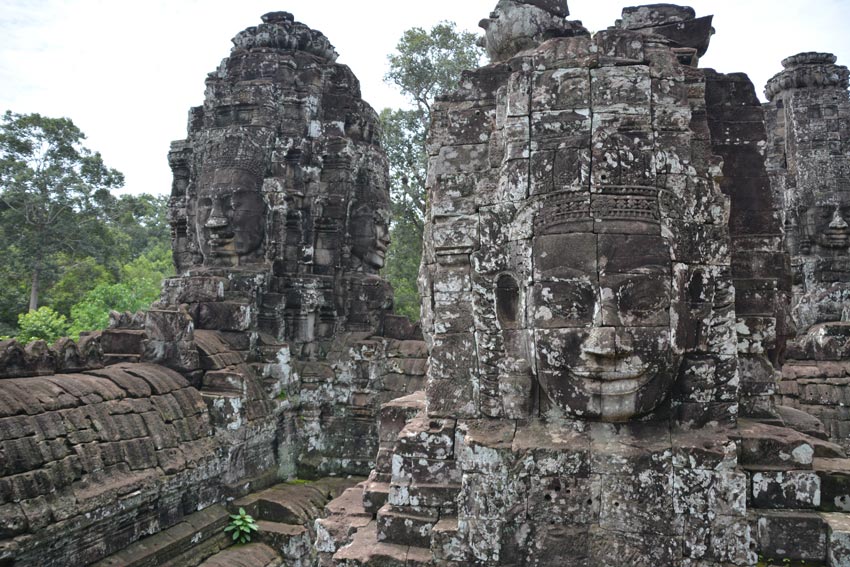 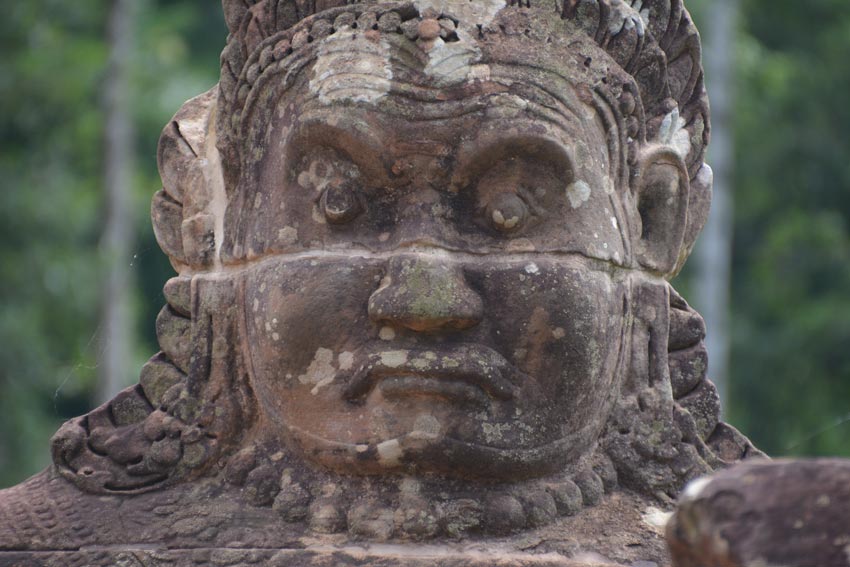 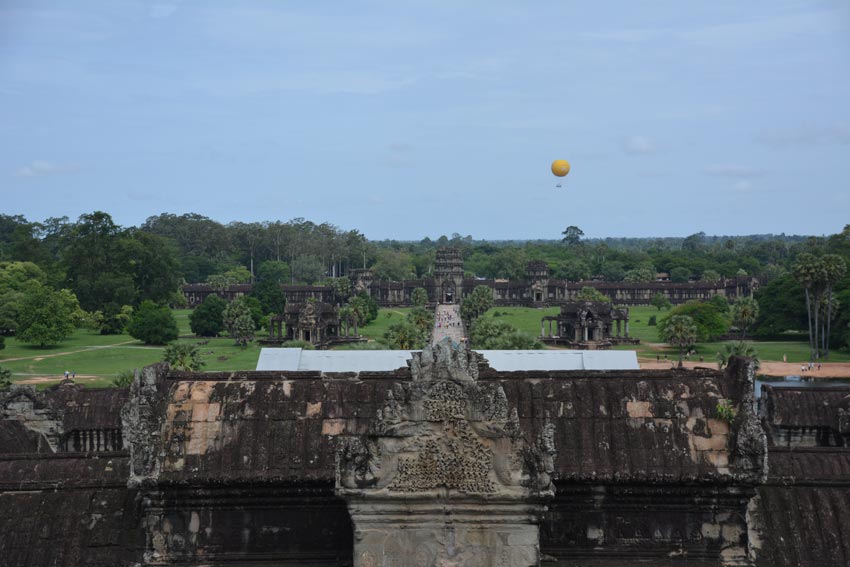 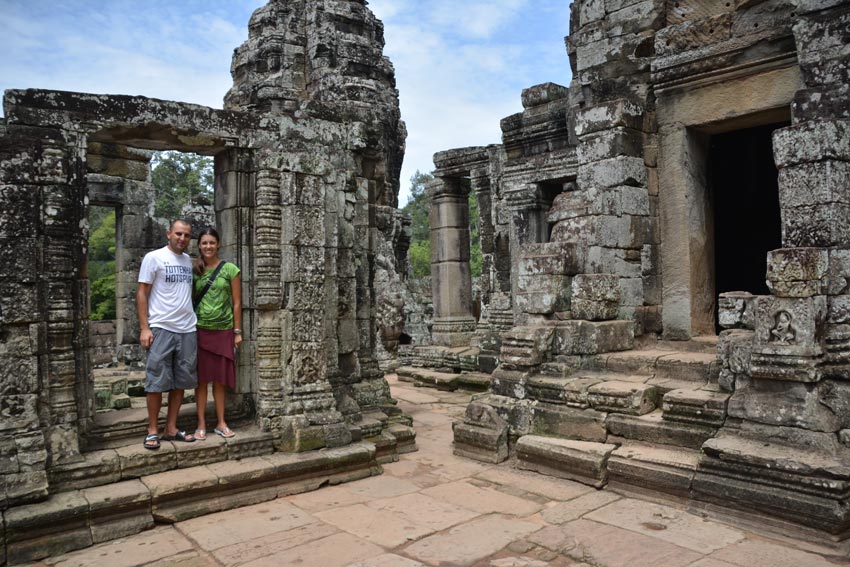 After Ubud, Bagan, Bangkok, Chiang Mai, Vientiane, and Luang Prabang, Alissa and I are suffering from what I like to call temple-fatigue.  We have seen and gone inside so many Hindu and Buddhist temples that we are having a hard time enjoying any temples we come across when entering a new country or city.  This is especially true in Bangkok, where we just simply made the decision not to visit any temples during our three weeks there.  Seeing them from a distance during water taxi rides was enough.

Then we got to Siem Reap.

The temples here rival the beauty and serenity of Bagan’s temples, but have a much more eerie “abandon-ess” to them.  Our temple fatigue seems to have faded upon first glimpse, and we have found our temple exploration second wind.

The Angkor temple region outside of Siem Reap is very large, and the entire area is managed and protected by the Cambodian government.  At first, I am impressed that such a corrupt government could accomplish preservation like this.  That was until I found out that they sold the site management contract to a private company who steals millions off the top for themselves.  Basically the government has stolen this amazing site from its own people so that thousands of people who live near the temples receive $0 of the $60 per person entrance fee that is paid by each of the two million annual visitors.  Could you imagine the United States allowing a private company to sell $60 entrance tickets to the Statue of Liberty, letting the company keep 70%+ of that money each year, and all while the statue itself suffers from much needed preservation?  The city of New York and U.S. citizens everywhere would riot. 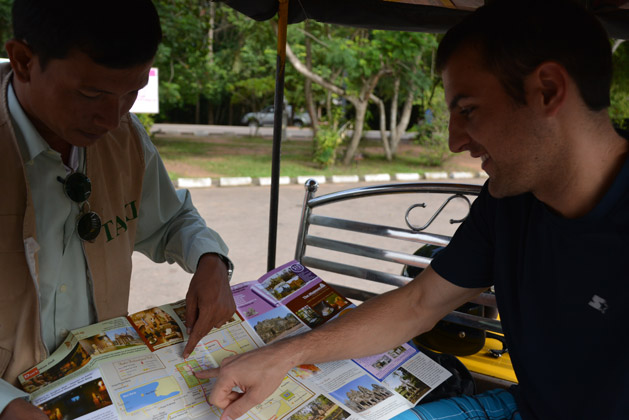 My brother Andy discussing the temples we would like to visit with our tuk tuk driver.

Since the actual temples are a good 10km or so away from the city of Siem Reap, the best way to visit the temples is to hire a tuk-tuk driver for the entire day.  For $20, a driver will take you around all the sites, drop you off at each one, wait for you, then pick you back up when you’re ready to see the next temple.  We had one of our Cambodian friends recommend a driver named Tee, whom we are really pleased with.  He even takes us to a great coffee shop this morning before our long day of exploration.

We start by visiting the most famous temple here, Angkor Wat.  At around 11 million square feet, this temple is actually the largest religious building in the world.  The amount of effort and manual labor that must have been put in 900 years ago in order to build these temples is mind-boggling.  There are four hallways surrounding Angkor Wat, each about the length of two football fields, each featuring a carved wall telling the story of the great city of Angkor.  The wall carvings are impressively detailed with each depiction different and unique. 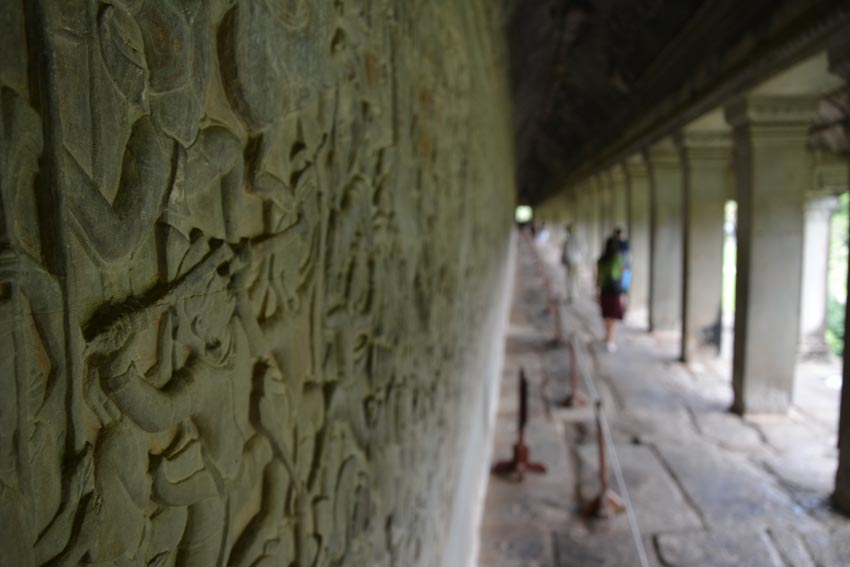 The wall carvings of Angkor Wat

I am also surprised by just how tall Angkor Wat’s main structure is.  We have to climb up three different sets of stairs to finally reach the top layer, and even when we get to the top there the spires of the temple tower over us.  Experts claim that this complex was built in about 35 years, which I think would still be considered fast even if the had today’s tools and technology.  The temple appears to be a walled city, but as I overhear another guide talking, it sounds like very few people actually lived within the walls of Angkor Wat.  The nearby walled city of Angkor Thom is where the 1,000,000+ citizens of Angkor lived, and much to our delight, it’s our next stop on the tour.

One of the things that makes the ruins here in Angkor so great is the amount of green space and beauty between each temple.  900 years ago, the area surrounding the temples were packed with over a million citizens, each living in some sort of dwelling.  However, the only structures that were built in stone were the temples, walls, and moats.  So after 900 years, everything else has slowly been moved, decayed, burned, blown away, gotten stolen, who knows what else.  That leaves a fascinating landscape of beautiful moats lined with ancient walls and massive gates leading to nothing more than a walled jungle.  It is one of those places you visit that you find hard to compare to anything else on Earth. 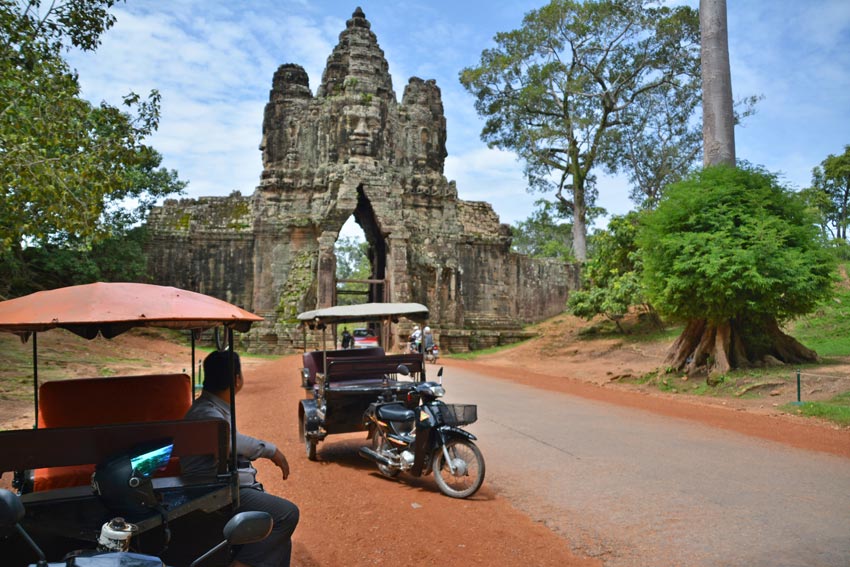 The gates of Angkor Thom

The city of Angkor Thom, translation: The Great City, is still surrounded by its original wall and accessed by it’s original gates.  The gates, and the bridges leading to them remind me of the gates to Jurassic Park.  Because the city is now gone, the gates now have an eerie look to them, as if there is still something alive behind those walls that they have to guard.

The Heads of Bayon

Once inside the walls, we head to the temple I am looking forward to the most, Bayon.  I’m sure there are already hundreds of nicknames for this temple, but I will simply call it “The Temple of Faces”.  I have seen pictures of this temple before, and it has long been on my bucket list of places to see in person.  The temple does not disappoint, and my brother, who is making his second visit to Bayon, is just as astounded at seeing it now as he did the first time around. 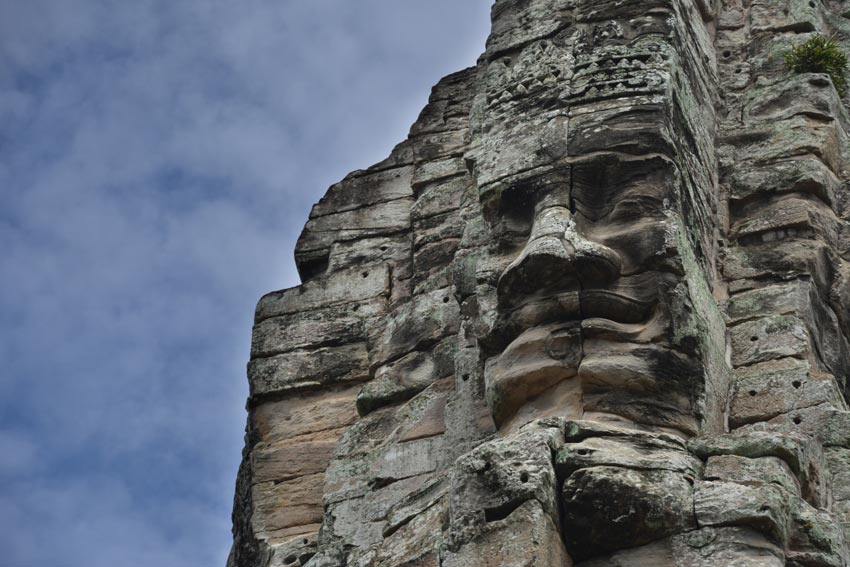 One of the many faces of the Bayon Temple

Everywhere we turn, there is another face starting at us from the past asking us “What are you doing in my temple?”  This temple is also number one on my list of places in the world to photograph.  The different options for point of view, line of site, and depth of field are endless and overwhelming.  I could spend hours here, just taking pictures.

We leave the gates of the Great City and head towards the last temple on our must-see list… Ta Prohm, known to many Westerners as the Tomb Raider Temple (thanks Angelina Jolie).  This is one of the few temples in Angkor that has been left mostly the way it was found, although work is finally starting to be down to restore it.  Because it had been untouched for hundreds of years, there are large trees and roots growing all over the temple.  It looks so cool that you would think it’s fake, something you would see while standing in line for a ride at Disney World or Universal Studios. 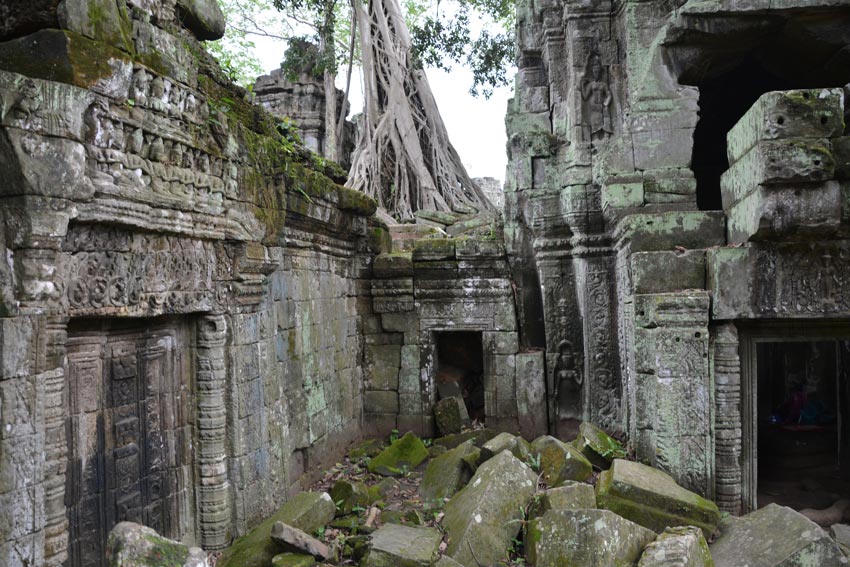 A Ta Prohm tree towers over its walls

Bayon just became my favorite photo spot of the trip and Ta Prohm quickly became number two.  It’s amazing how something so old and deserted can look so beautiful.  There are a few spots that have needed supports built to keep archways and walls from crumbling over.  A large renovation project was going on at the time of our visit, but even that couldn’t take away from just how cool this temple was.  We also ran into two of the kids from ODA who were at the temple painting today, which was really great to see!

After seeing these sites, it is no surprise to me why Siem Reap’s tourism is growing exponentially each year.  We were here in low season, and it felt crowded.  I can’t even imagine what it’s like here in high season when the hundreds of busloads of Chinese and Japanese arrive each morning.  I would put Siem Reap at the top of any traveler’s “see now list” because in ten years this place is going to be unpleasantly crowded, Eiffel Tower style.  The good news is that new cities are STILL being discovered here, but seeing a temple at sunset alone will be a soon be a thing of the past: 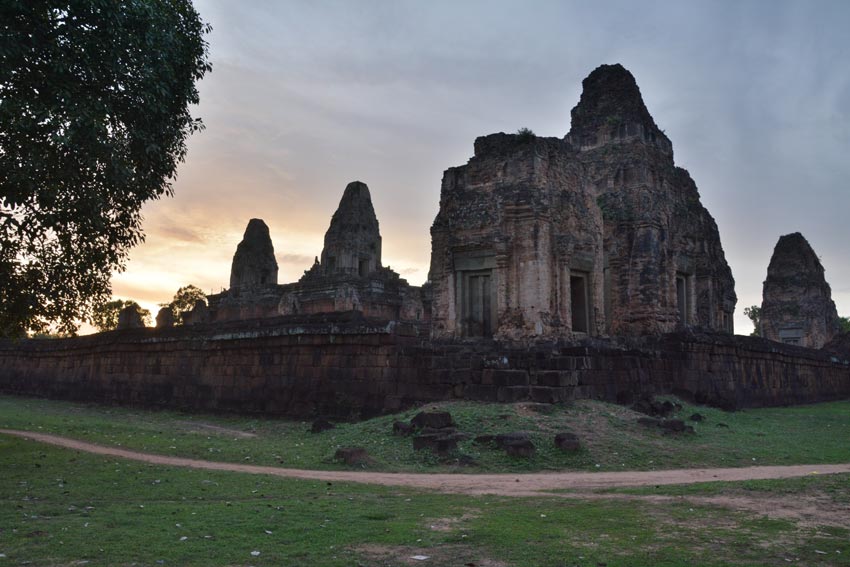 6 Responses to Just Scratching the Surface in Angkor, Cambodia