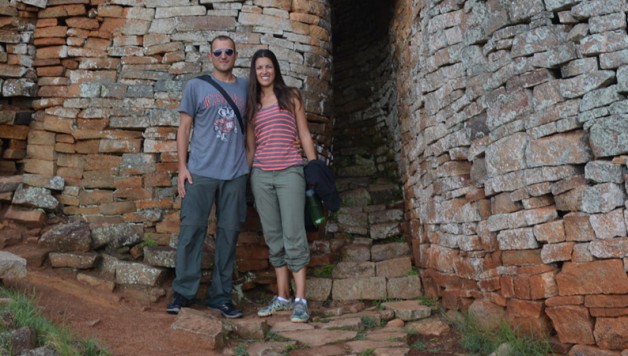 An Ancient City All to Ourselves: The Great Zimbabwe Ruins

After the slowest border crossing of our Africa trip, we finally made it to Masvingo.  The border crossing involved our group of 20 standing in a line, waiting for one person behind the counter to hand-write each of us an elaborate receipt.  Then all 20 had to stand in a another line to get a hand-written visa and stamp.   Not the most efficient way to do it.  We eventually make it through, and are ready to begin our two-week stay in Zimbabwe, a country we are very excited about exploring. 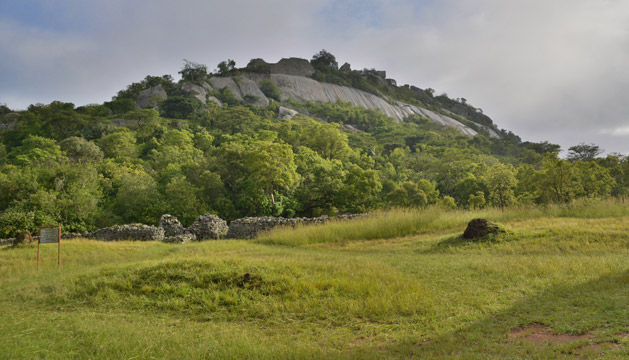 Our campsite for the first night is less than a half mile away from what are known as the Great Zimbabwe Ruins, where Zimbabwe actually got its name from. ‘Zimbabwe’ means stone houses in the Shona tribe language, and Great Zimbabwe is a collection of stone ruins from a civilization that lived there from the 11th to the 15th century.  These ruins, although amazing, are rarely visited due to it’s location.  Today, our Oasis Overland group are the only visitors.  In fact, CNN recently did a “travel article” on it and didn’t even send someone to see them in person.  They just used stock photos (Getty images) and probably Wikipedia as their source.  Today, we have our own local expert, who happens to be one of the best, most-knowledgable tour guides we’ve ever had in our travels.  He is a local and he knows more about this place than he could possibly tell us in just the next two hours. 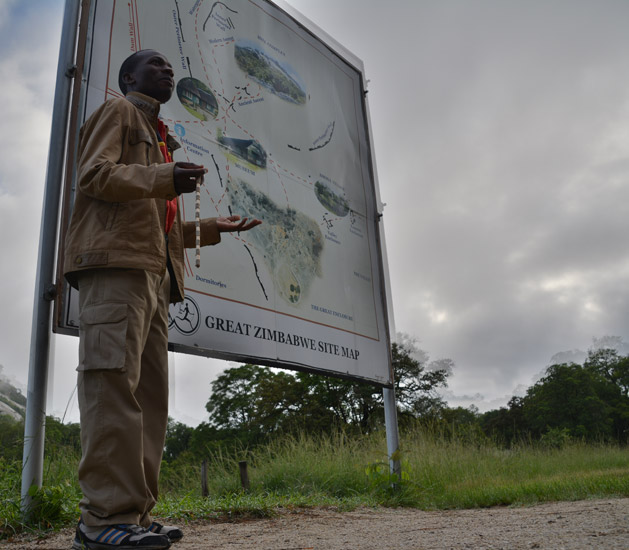 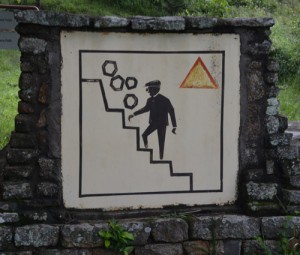 Our guided tour starts with the Hill Ruins which housed royalty and other important village members such as healers. We climb the hill, taking care to watch out for falling rocks, as the dapper gentleman on this sign warns us(pictured on the right).  The path to the top starts out very wide and comfortable.  Many of the original stone stairs are still in place, and it is amazing how great of shape they are in.  The path slowly begins to narrow until we eventually need to travel single file and it even becomes difficult just to squeeze through.  Our guide tells us this was done as a form of protection 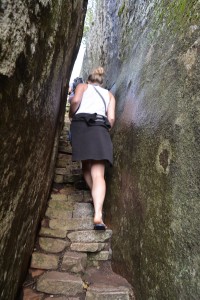 The ever-narrowing path up the fortress.

from invaders, since it would be difficult from an army to attack the fortress in a single file line.  This explains the immigration line we went through yesterday.  It must be slow and single file in order to keep out invading armies from breezing through immigration too quickly.

At the top, we learn about the homes and practices of the chiefs and their family.  When a new king would take over, he would simply demolish the old king’s house and build his house directly on top of it.  This has caused the fortress to slowly get taller.  When the archaeologists are digging now, they are simply peeling back layer after layer of king’s former homes.  The guide even points out the “rings of floors” in some of the excavated walls, which appear almost like rings in a tree trunk, showing each layer as a portion of time.

The walls and even some doorways are amazingly intact, especially since the stones were just stacked, using no mortar whatsoever.  We almost feel if we pushed on one of the walls, they might just fall over. 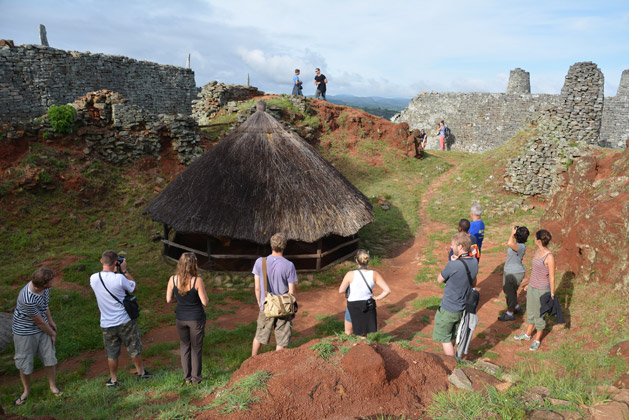 Another interesting fact we learned was that after a new king’s induction ceremony, he had to have sex with his sister on the back of a crocodile before officially becoming king.  This was for two reasons: to prove his bravery and strength (via the croc) and because incest was not an accepted practice.  This meant his sister can use this fact as blackmail if the king ever wanted to make a decision for the villages that she doesn’t agree with. As our guide put it, “it was just an ancient form of checks and balances”.  (How he knows this happened in an extinct civilization, is anyone’s guess.) 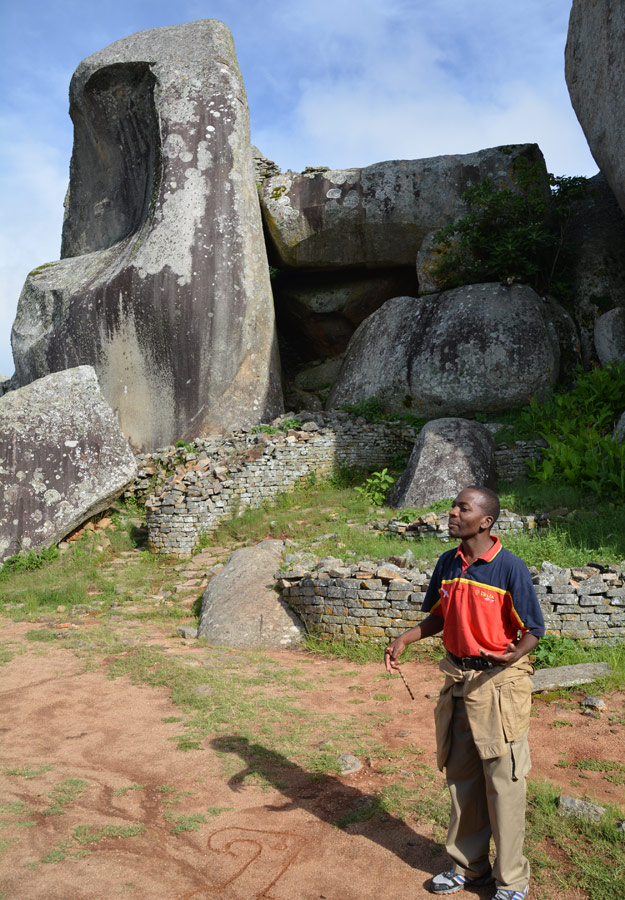 We rest in a cave overlooking the Valley Ruins, where the common people lived, and our guide demonstrates a likely communication method: his shouts from this low cave echo over the land for a good 10 seconds.  It really is incredible.  He allows us to try a scream as a group, and we hear the sound travel for 10-15 seconds across the land.  Dan tells me he is happy his mother didn’t have one of these caves back when he was growing up (or now).

Around the acropolis, eight carvings of the Zimbabwe bird were found.  This bird is considered the biggest treasure to have been found here, and was even adopted as the national symbol and is on the Zimbabwean flag.  We climb to the chief’s podium, also shaped like a giant Zimbabwe bird for the ultimate scenic view.  The picture on the left shows the giant bird, with our guide drawing the shape of the bird in front.

Our tour ends with a stop at what is know as the Great Enclosure.  The walls of the round structure are between 9 and 22 meters high, and it was used as a community center-type building.  The amount of facilities that are still intact are amazing, much more so than any ancient city we’ve seen in other countries, like Cambodia’s Angkor or Sri Lanka’s Polonnaruwa.  We see classroom areas, alters for worship, and the pillars in the photo below which were used as a sundial. 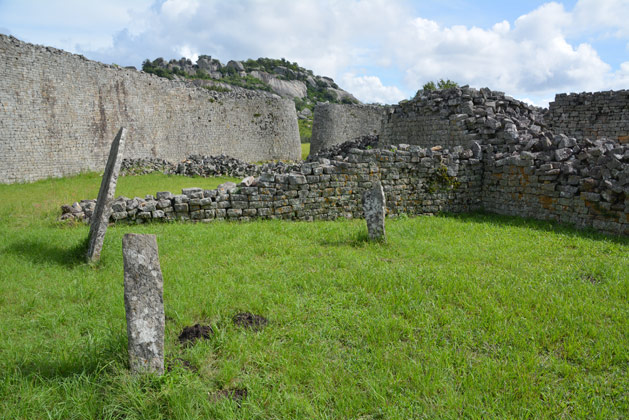 Still, the craziest part of the whole tour was, for something this incredible, we were the only tourists here.  A huge different to any other ancient ruin sites we’ve seen, and another sign that Zimbabwe is still growing its tourism industry. Visit this place soon, it probably won’t stay like this for very long! 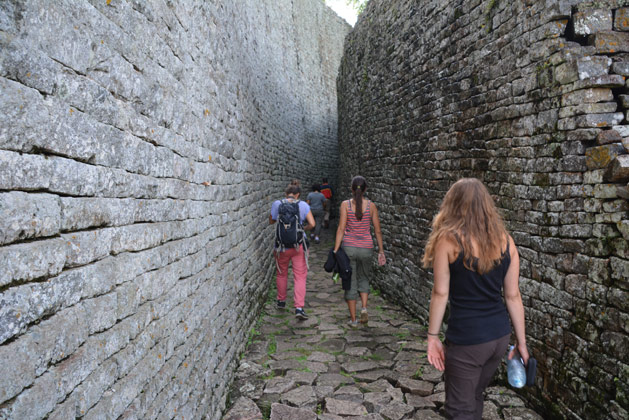 The walls of the Great Enclosure.

One Response to An Ancient City All to Ourselves: The Great Zimbabwe Ruins