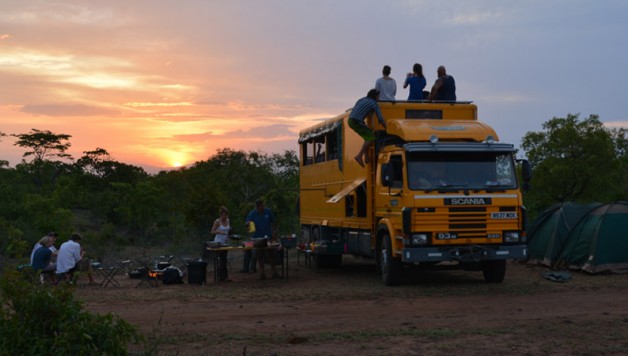 To Overland or Not to Overland? Why We Chose Oasis 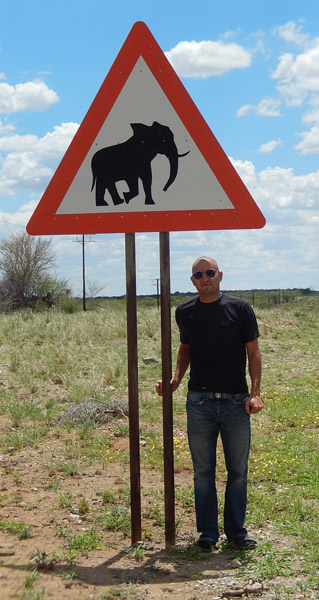 Over the course of the last two months in Africa, we’ve received a bunch of emails and messages asking about our trip with Oasis Overland.  Why we choose them, what is the company like, would we do things differently next time, etc, etc, etc.  Instead of answering each question individually, I decided to cover all of them, and more, in a couple of recaps of our Africa overland trip.

Part 1: To overland or not to overland?

I think the biggest question Alissa and I faced when determining what to do with our time in Africa was whether or not we even wanted to use a tour company.  Once we decided to to do an overland trip, the choice of using Oasis was pretty obvious, but I’ll talk more about that below.  Many seasoned travelers would consider jumping on a tour for two months to be some sort of taboo.  We did get a few of these responses: “You’re going on an organized tour!??!?!” Our tour guide in Vietnam holding the flag of boredom.

I’ll admit it too.  Before doing my research, I had the same attitude, and actually I still do:  I do not like organized tours.  Every time we end up on an organized tour, whether it’s for an hour, a day, a week, or longer, I end up losing my mind.  It is also important to note that when we tour areas on our own or with a private guide, we always have a great time and never regret it, which just adds to my contempt for organized tours.  I know there are some decent tour companies out there, but I always seem to have the same experience with all of them.  The guide is always boring and repetitive, the other passengers seem to grow exponentially annoying (as do I to them), and we usually get carted around to places and shops that give kick-backs to the tour company.  A perfect example of this would be our two-day boat tour of Vietnam’s Ha Long Bay last July.  This is especially true for my attitude about tours in Asia, and in all fairness, I should probably be more specific and say I do not like organized tours in Asia.

Before this trip, I had never stepped foot in Africa, so when planning, I decided to temporarily cure myself of my pre-existing condition of hating organized tours.  The biggest thing for us in Africa was transportation.  I know some people who choose to do organized tours so they don’t have to plan anything at all.  That makes sense to me, except I don’t mind the planning.  In fact, I enjoy the planning part, and Africa was no exception.  I find it both fun and challenging trying to determine if and how Alissa and I could get from the Serengeti to the beaches of Lake Malawi or from a river in Botswana to a desert in Namibia.  So transportation is where I started my decision making.  For Eastern and Southern Africa we basically had three options for transportation: 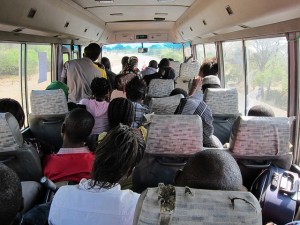 A relatively uncrowded minibus in Tanzania. Image from: butforthesky.com

Yes, seeing how the locals move around is a great way to experience another culture, but at what point into a 15-hour over-crowded minibus ride in Tanzania does the experience go from being a good, even comical cultural experience to just pure torture.  We are all for getting out of our comfort zone, but the public transit from country to country in the parts of Africa we planned on visiting was just not something we were prepared for.  A crowded train or bus is one thing, and we’ve done that before in other parts of the world, but OVER-crowded is where I begin to draw a line.  Here in Africa, I just don’t feel comfortable, but more importantly, I don’t feel safe on a minibus that is meant for 14 people but packed with nearly 30.  I think we would have been fine doing one leg of the trip on a minibus just to experience it, but as I got further into the public transportation option, I realized we would have to have used a crowded bus at least ten times in two months.  I guess sometimes we need to just admit we are still tourists and not travelers.

This was the option that I initially preferred.  It allows for the most flexibility, and is by far the most challenging.  We met a lot of people in Africa, both young and old, who were making their own way across the continent.  Many had purchased vehicles just for use on an extended trip and planned on selling the vehicle when they left Africa.  I would love it if Alissa and I had the ability to do a trip like that.  The big issue though is that there is no AAA , OnStar, or 24-hour roadside assistance in Africa.  The fact is that things go wrong with vehicles in Africa.  It’s part of the experience.  So is fixing the car.  That is where this option fails us.  If something were to break on the car, we would really be in trouble.  I can fix a computer in minutes, but I couldn’t even point out the radiator on a car (it’s in the back somewhere right? Somewhere near the flux capacitor?). 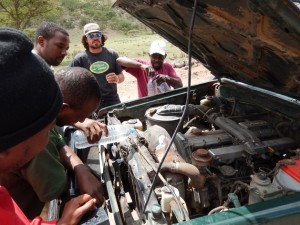 Local guides fixing our truck after it broke down during our Serengeti safari.

This is enough of a reason for us to not use this option, as much as the adventurous side of it appeals to me.  Yes, it would be terrible and annoying to break down in the middle of Mozambique.  However, I think it would also be a pretty great way to meet some local people.  The inevitable did of course end up happening on our trip.  Our safari truck broke down in the Serengeti, and our overland truck had the <a title="This is Africa: Getting Stuck in the Mountains and the Mud" href="https://thisworldrocks.com/destinations/africa/