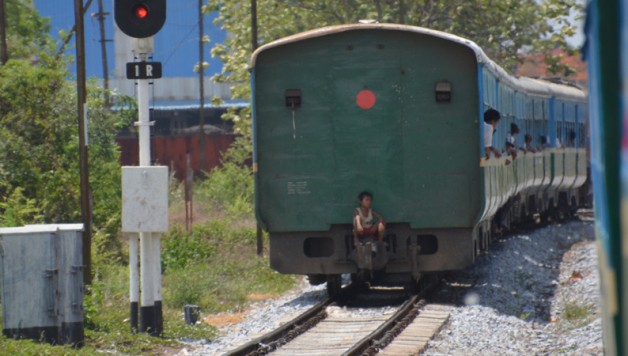 Anything Can Happen: Traveling within Myanmar

One of the craziest parts of our three weeks in Myanmar was the traveling experiences on taxis, trains, and buses.  I have compiled a set of short stories about some of the crazier experiences we had while moving from city to city inside Myanmar.

I may have sighed

There’s an old tale that goes back generations in my family.  It’s less of a story, and more of just a saying that implies what happend to you.  The tale always refers to a moment in your life when someone else has intentionally or unintentionally made you uncomfortable.  When asked whether you said something to the person, the response is always “I may have sighed.”  On our first bus ride in Myanmar, Alissa and I boarded an already full bus in Bagan, set for a 5 hour trip to Mandalay.  The bus was packed, some rows of two seats were filled with three adults, or two adults and a toddler.  Right as we were about to leave, a bunch of people began boarding, each holding a small stool.  They proceeded to fill the aisle, one by one.  I really didn’t know what to think, and really I was just hoping we were still under the weight limit.  I’ve been on the Mega Bus in the U.S. where the riders are each twice the weight as these people, so that calms my nerves a bit.  The ride goes fine until the guy next to me decides he needs to sleep and uses my hip as his pillow. 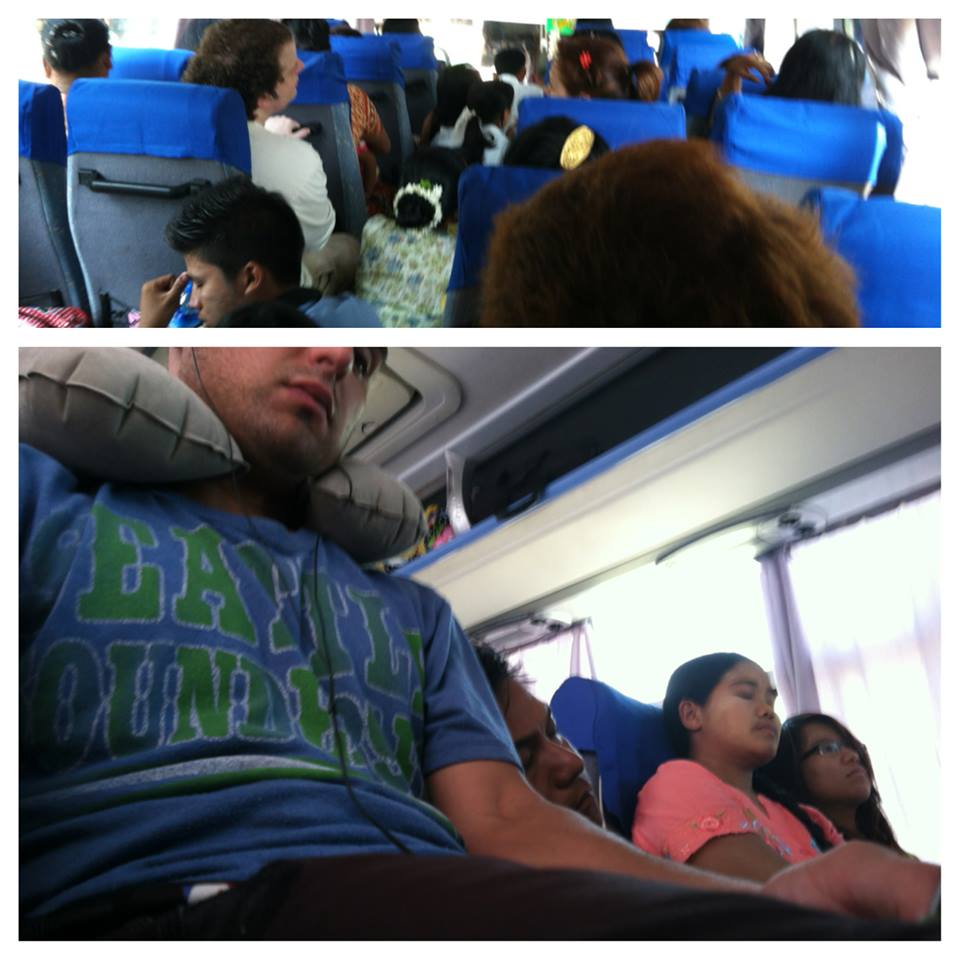 During our 21 days in Myanmar, we spent over 40 hours on trains.  Four times we boarded one of these death canisters.  I still don’t understand how smooth, metal track can be so bouncy, but trains in Myanmar are like nothing we’ve ever experienced.  You can read our full report from our Yangon to Bagan train and you can watch the short clip below from our Mawlamyine to Yangon train:

Why are we stopped?

Our second bus trip in Myanmar took us from Hsipaw in the north to Inle Lake in the middle of the country.  We left at 5pm and were scheduled to get to Inle Lake around 4am.  The bus was a local bus, and Alissa and I were the only tourists on it.  It is normal in Myanmar for buses to stop every 3 or 4 hours for people to eat, stretch, and use the bathroom.  Our bus stopped without incident at 8pm, and then again at 11pm.  However, when I walked outside at the 11pm stop, I noticed something was different.  Normally during these breaks, we stop at a tea shop, or rest area filled with shops.  This stop had us in the middle of nowhere.  There was nothing but eerie blackness for miles in either direction. 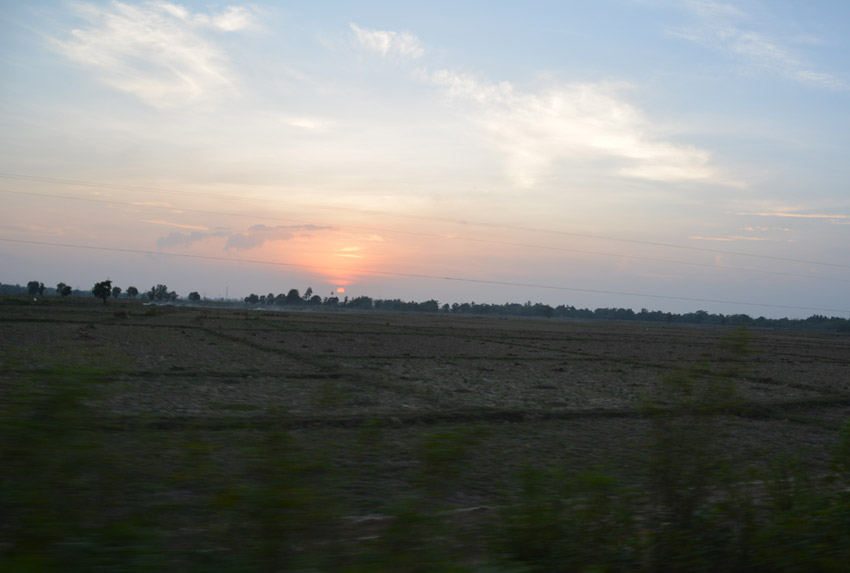 A few hours before stopping, we enter “The Middle of Nowhere”

People began walking into the wilderness to relieve themselves, and Alissa and I, given no choice, followed their lead.  These stops normally last 30 minutes, but at 11:45, I began to notice something isn’t right.  I tried to ask people on the bus why we were stopped longer than usual, but no one could speak English.  So we decided to go to sleep, assuming we would be moving any minute.

I awoke at 3am.  We hadn’t moved an inch.  Everyone on the bus was sleeping.  I knew we were still 5+ hours from Inle Lake, and here we were at 3am, and we hadn’t moved in four hours.  I walked outside and looked around, dodging the pack of stray dogs that were crowding the door.  I then noticed someone was sleeping underneath the front of the bus, laying there with a pillow and blanket.  It was our driver.  I woke him up with a “why are we still here? Is something wrong with the bus?”.  His reply: “Oh, we can go now”, as he awoke, folded up his blanket, and got back on the bus.  10 minutes later we were moving.

The lesson for us on this bus ride was that the driver is in control, and can do anything he wants.  He can kick people off the bus, he can add extra people, and he can stop and take a nap any time he is tired.

We hired a taxi to take us on the hour-long ride from Bago to the Sittang Bridge to see some of Myanmar’s WWII history.  The car was the nicest vehicle we rode in during our 21 days in the country, a Toyota Prius.  20 minutes into the trip, our driver changed the music from slow, American love songs to some sort of local talk show.  At least that’s what we thought, until we looked into the front and noticed he had turned on a TV show.  That he was watching as he drove!  When he noticed me see him watching the TV, he got my death stare(the one I learned from my mom), and he quickly turned it off. 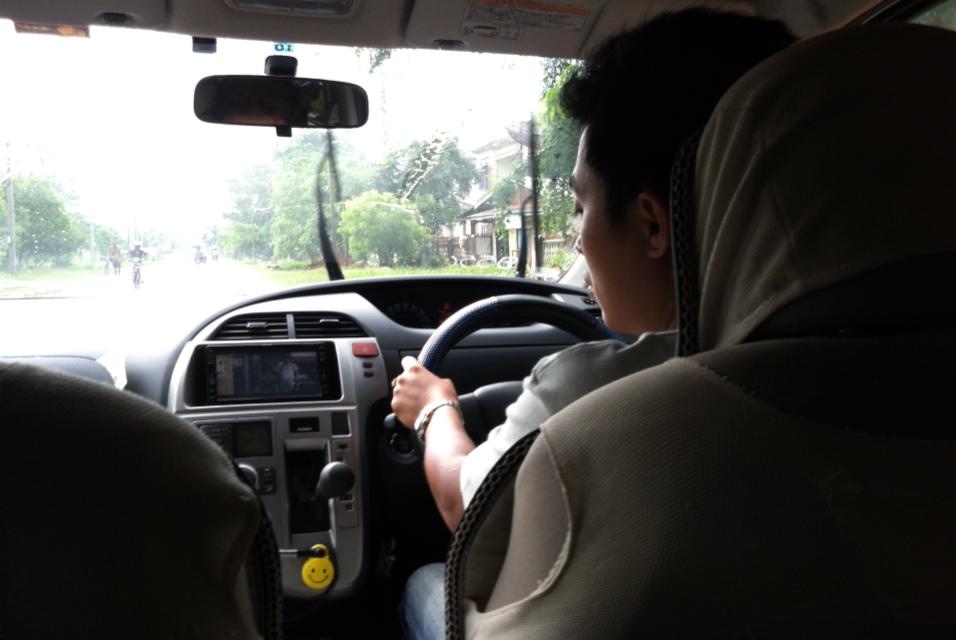 We had exactly one day in Kyaiktiyo, the home of Myanmar’s famous Golden Rock, and seeing that rock is the only reason we went there.  We were told that the rock is just a short one-hour truck ride away from the base town of Kinpun.  We got to the bus station and were told to get in the back of a large pick-up truck.  One that was already full of people.  Not full to the point where there were a few scattered seats here and there, but full to the point that there were NO seats left.  So the monks in the first two rows moved together into the front row, some standing, some sitting, so that Alissa and I could fit.  The ride up the steep mountain road was one of the scariest rides of my life, and I just kept saying to myself “This driver does this every day.  This driver does this every day.”  Here is a photo I took facing the back of the truck: 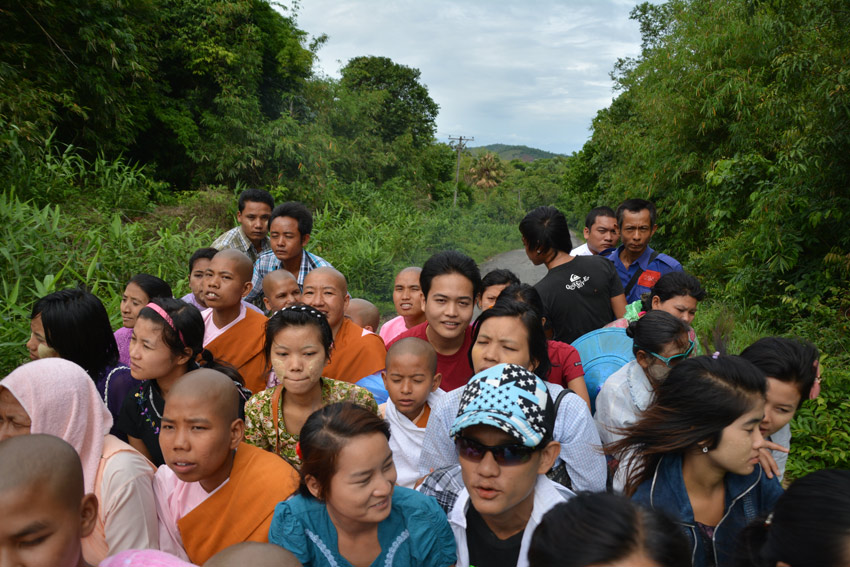