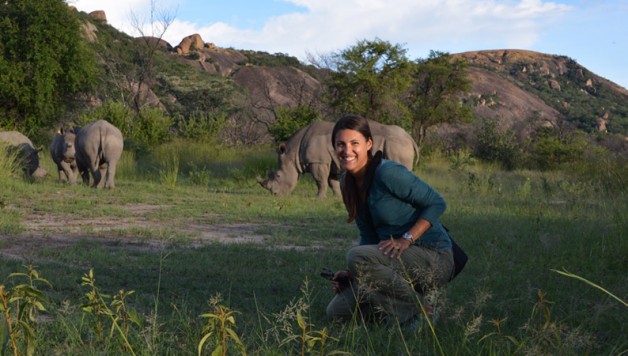 A Trek to See the White Rhinos of Matobo National Park

A few days after Dan’s night encounter watching lions hunt, I had the chance for an up-close animal encounter of my own.

We arrived in Bulawayo, Zimbabwe in our Oasis Overland truck and set up our camp for two nights at Burke’s Paradise campground and hostel.  Andy from Black Rhino Safaris speaks to our group about the next day’s activity: a photo safari of white rhinos via truck and on foot.  We saw some rhinos during our safari in the Serengeti, but we weren’t allowed to leave the vehicle.  We could only view the rhinos from a distance that required binoculars or a zoom lens just to see that it was actually a rhino.  The chance Andy is offering will allow me to get within 10-20 meters of one of the rarest animals on Earth.

In the morning, Andy picks us up and we set out to Matobo National Park, home to one of the largest concentrations of white and black rhinos in the world.  We drive around dirt paths, periodically stopping to watch Andy examine animal tracks and explain his findings. He occasionally spots a game path or some rhino tracks, stops, then reverses to change course. 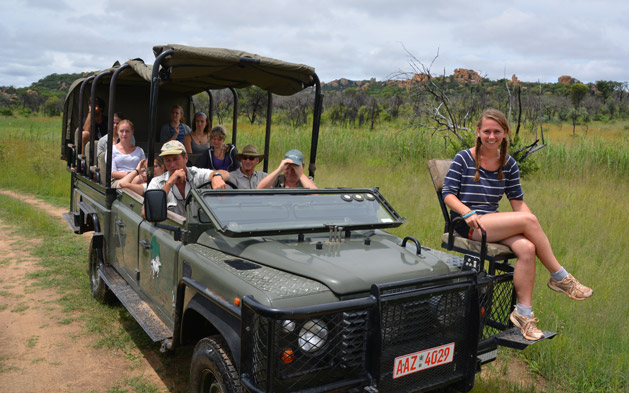 Once, he got so excited about a opportunity, that he backed up into a truck waiting behind him.  The damage to the trucks was minor and the incident gave all of us onboard a good laugh: 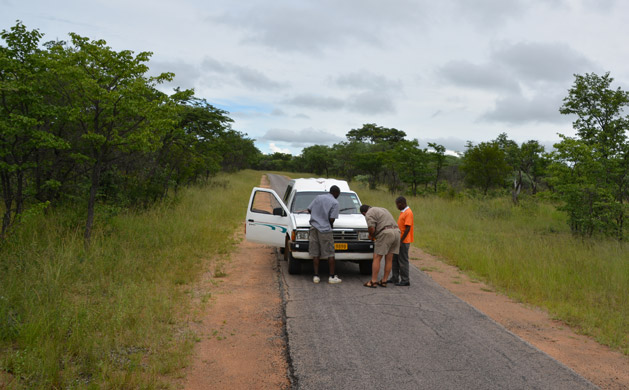 After an hour or so of hunting, Andy found some park rangers patrolling the area.  Rangers here are issued semi-automatic guns and hired to protect the rhinos from poachers.  Andy explains that Zimbabwe laws permit firing at and even killing poachers caught in the act, in order to protect the rhinos.  A law Andy feels we Westerners are too soft to understand.  I think he uses the term “you Westerners” more than 10 times during our trek. 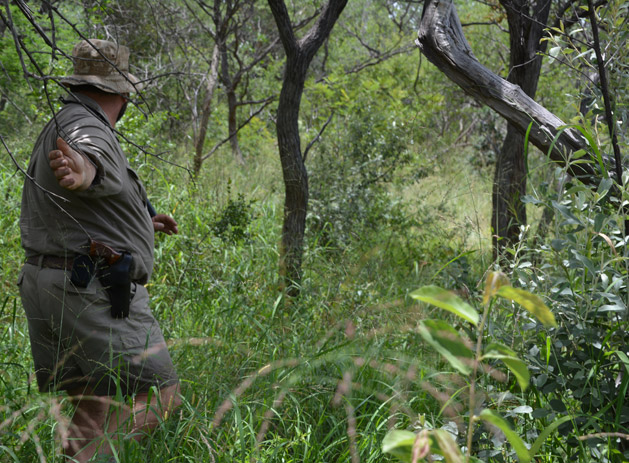 The rangers share which areas of the park they already canvased that morning without a rhino spotting, so we head the other direction on foot.  Trekking through the bush lands, single file, alert and stepping quietly, we feel like real adventurers.  In less than 30 minutes, we’ve found a group of three white rhinos!  We creep around them to get to a good viewpoint, and watch for a few minutes until they get spooked and trot away. We follow them, through muddy paths and waist-deep streams.

We get into a good position, take some photos, and accidentally scare them away.  This happens a few more times, but each time we get close enough to observe these unique and interesting creatures. 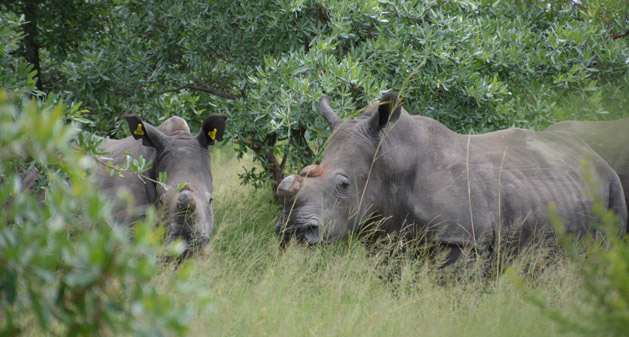 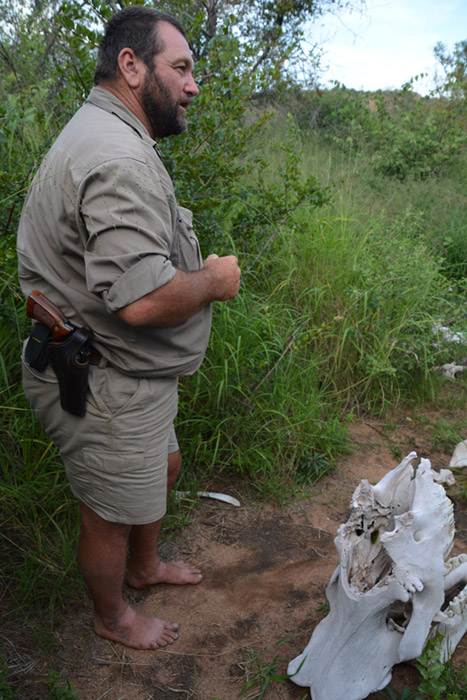 After an hour or so of tailing the rhino group, we leave them alone, and stop to learn more from our expert guide. He explains the main issue threatening rhinos in Africa: Their horns sell from $1 million to $4 million USD per horn on the black market. Poachers themselves make a small percentage of that, around $5,000 per rhino killed, but for villagers in this area, that amount can be enough to sustain a family for years.  The consumers are Chinese, Vietnamese, and other East Asian people who believe medicines made from rhino horns cure all kinds of ailments, from headaches to cancer.  Another popular use is as an aphrodisiac, an assumption based on the fact that male rhinos will ‘service’ the females during breeding time for over 45 minutes, versus less than two minutes for most grazing animals.  We did not get to witness any mating acts to confirm this.

To combat the issues of poaching, governments and private conservation organizations have tried a number of measures, from the armed guards in the national parks to proactively cutting the rhinos’ horns (painlessly).  They are even discussing selling the legally obtained horns to flood the market in order to lower the black market demand.  Even with these measures in place, two rhinos were killed in the park only a few months ago.

Andy’s disgust for the entire rhino horn industry is passionate.  He admits that he doesn’t have a solution to climate the demand or prevent poaching, but if it were up to him, he would hire assassins to kill the middlemen in the criminal organizations behind the rhino horn trade.  Again, according to him, this is something our soft Western views on human rights can’t stomach.  Although his solution may seem extreme, his passion is genuine and commendable.

Before searching for more rhinos, we trek back to the truck for lunch, then head to the other side of the park to explore some historical ruins.  At the top of a steep, rocky hill is a cave wall full of paintings believed to be from the San people (also known as Bushmen), one of the first known peoples in southern Africa.  The paintings depict everyday life for the Bushmen: hunting, cooking, family life, etc. 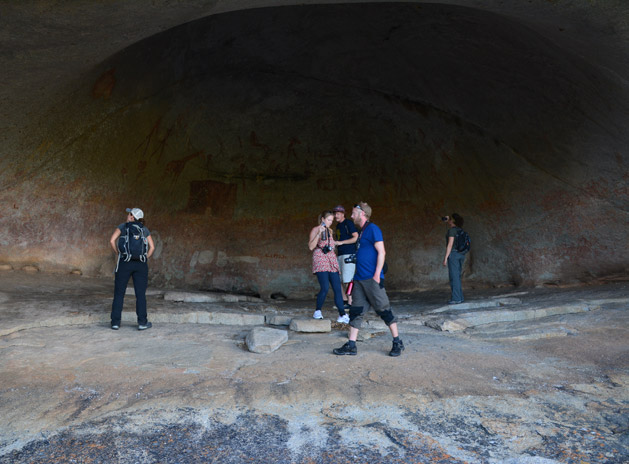 The hill offers amazing views of the national park and of the villages nearby.  The rocks themselves are historically significant at over 3 billion years old. 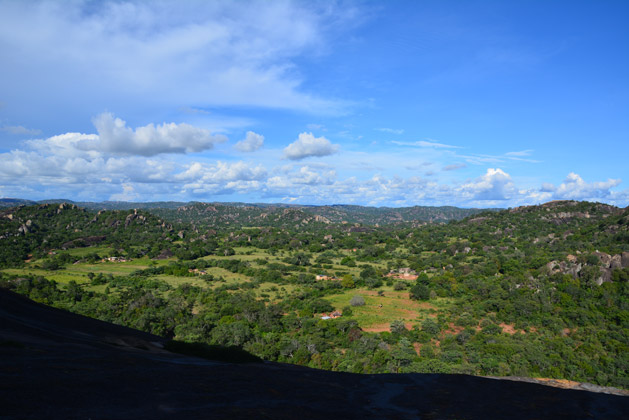 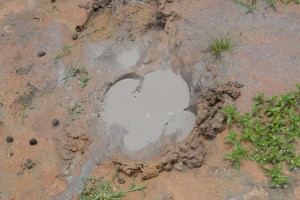 Back at the bottom of the hill, Andy takes us back into the park and we quickly stop for very recent tracks(pictured on the right).  The print looks more like a dinosaur than a rhino, and it is amazing just how big it is.  We follow the tracks and walk less than 10 minutes until we find the group of five white rhinos.  This group is much less skittish than the rhinos from this morning, plus we have the setting sun and wind in our favor, so we are able to get within 20 feet of the huge beasts! 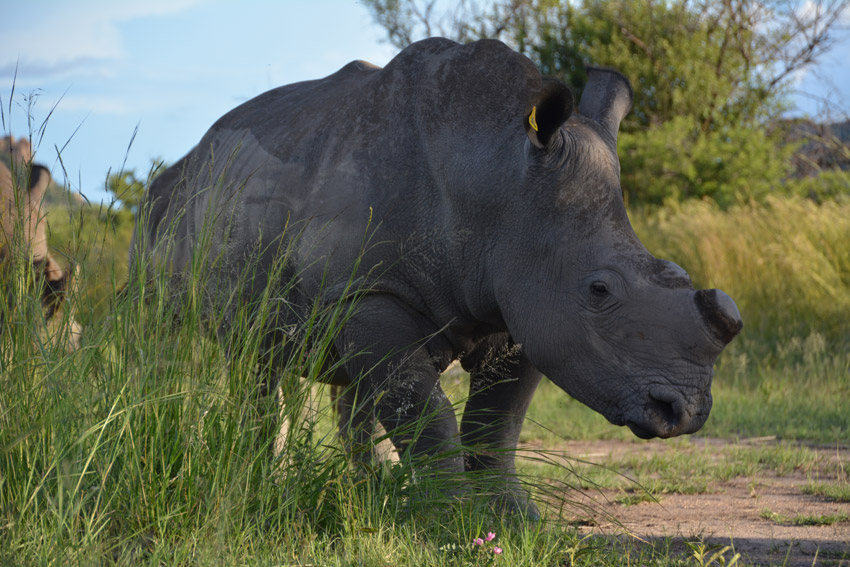 Andy takes my camera and silently points for me to creep closer for a photo.  I’m a little afraid, especially after his stories of being charged by rhinos, but when else would I have an opportunity to get this close to a truly wild animal this rare? 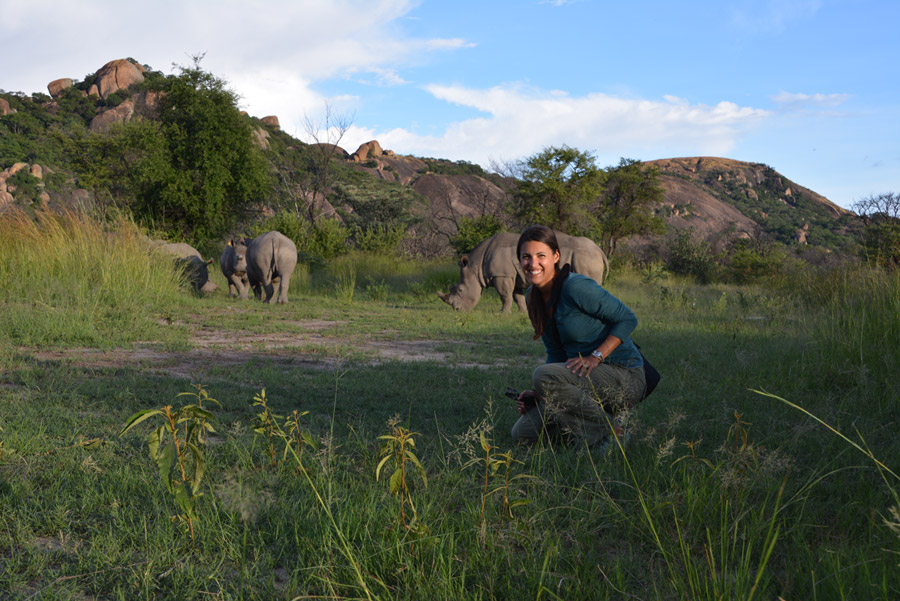 Each of the 11 of us take turns getting their own photos crouching up close. During one of these shots, the rhinos start to curiously sniff a bit too close for comfort to Dani and Anna.  A brief moment of silent panic is clear in the girls’ faces before Andy instructs them to stand up.  This movement, along with a deep growl from Andy, quickly startles them backwards, to everyone’s relief.

We end the busy day with a great view of the sunset over the park. The opportunity to get so close to rare, truly wild animals as big as these rhinos was incredible, and is one of highlights of my time in Africa so far.