VIDEO: Our Time with the Lions of Antelope Park 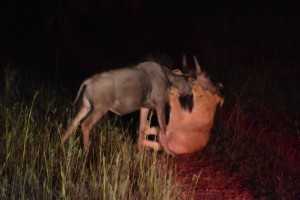 Two nights ago, I witnessed something spectacular.  I watched two lions track, hunt, and kill a wildebeest.  I always thought this type of experience would only come if I was extremely lucky, or just in the right place at the right time.  In the Serengeti, we saw two recent kills, but both prey were already dead at least an hour before our safari truck arrived on the scene.  This is because lions are rare and elusive in the wild, and seeing them in hunt in their natural habitat is becoming more difficult.  Sadly the African lion population continues to shrink, from 100-200,000 in 1950 to around 30,000 today.  The decrease continues to happen for a variety of reasons, but mainly due to the exponential explosion of the human population, which is taking more and more habitat away from the lions every day.

So how was I so lucky?

The answer is really that it wasn’t luck at all.  I was able to witness this hunt more as an observer of a conservation program than as a tourist.  The program is called ALERT, and its main base of operations is at Antelope Park in Zimbabwe.   ALERT is a ground-breaking conservation program that is using a four stage process of breeding lions that will one day be able to be released into the wild.  The reason there are four stages is because any lion that has human contact can never be released into the wild.  Therefore they breed lions in stage one and two with human contact, then they release those lions into a large stage three and four release site where they can then breed.  Those cubs born in stage three and four will never have human contact, and can one day be released into the wild.

On top of housing the conservation program, Antelope Park also offers tourists experiences that they can’t find anywhere else in the world.  In the last three days, I went on the night encounter hunt, Alissa spent a morning hanging out with lion cubs, I watched eight male lions feed, and we both took an hour-long walk in the bush with two 18-month lions.  Just read the TripAdvisor reviews for Antelope Park, and you’ll see just how much people enjoy these activities as well as the accommodations. 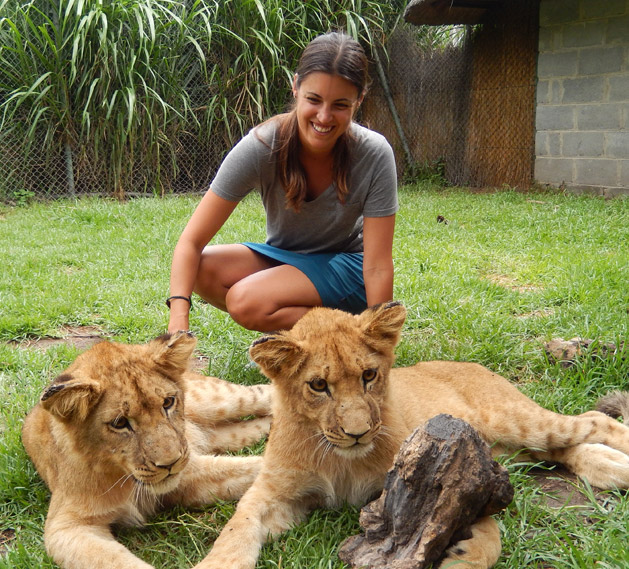 Funding the project amongst criticism

While ALERT is a nonprofit with registration also in  the US and UK, Antelope Park is a for-profit business, a pretty successful business too.  And with success comes criticism.  When I was preparing to come to Antelope Park, I came across a lot of that criticism online.  A lot of the criticism was about the fact that the park is a for-profit business.  It does seem odd at first, but after experiencing what they do here, I really don’t see a big problem with this.  The nonprofit program they run is not a cheap operation, and they are not supported financially by anyone except themselves or small online donations.  They’ve recently invested over $2 million USD to secure more land for future lion release sites, and spent over $250,000 to populate that land with game species.  The bottom line is that the ALERT program couldn’t exist without the for-profit wing of the business.

I find it interesting that people get upset at conservation program for being creative in making money.  Nonprofits starting up for-profit side businesses is actually a pretty big trend right now, and has helped thousands of non-profits stay afloat.  In my hometown, the non-profit Guthrie Theatre gets a lot of their annual cash flow from a for-profit side business of renting out costumes to high schools all over the U.S.  It is a model that works, and I like the idea of the model being tried in conservation efforts. Another example would be Ecotrust in the Portland who is funding a non-profit that conserves forests by doing the unthinkable: selling lumber! 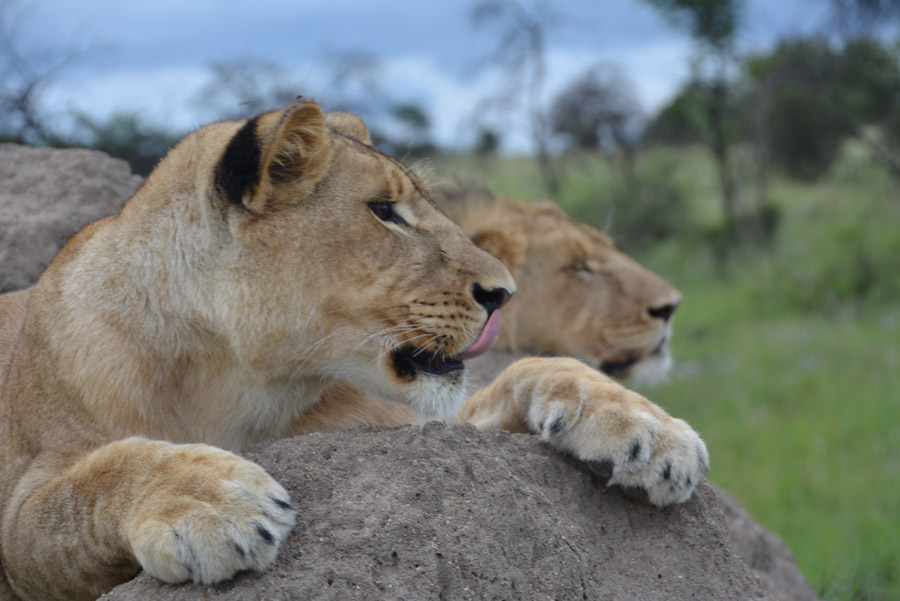 Lion cubs enjoying the view on their lion walk.

Yes, the owners also make a profit.  However, it is clear to me that the goal of releasing lions into the wild is still the priority and passion for them.  If they make some money in the process, I have no issues with that.  Because they breed lions, they currently have over 40 excess male lions that they could sell for around $50,000 USD each to be used in canned hunting.  If money were the only goal here, those 40 lions would have been sold years ago.

Instead, the park has decided not to be involved in canned hunting at all, and although it sucks that these 40+ lions are stuck in captivity, the park was very transparent about the problem.  They know they have too many lions, but their 100 or so captive lion population are really nothing in compared to the thousands of captive lions throughout the rest of the world.  People are so quick to criticize the fact that they have captive lions, but then those same people head to their local zoo every summer.  The bottom line is that even if I don’t agree with every method they’re using, I still agree with their end goal of increasing the wild lion population, and I believe they are genuine in their efforts to reach that goal.  I also believe that if this method is successful with lions, it can be reused for the reintroduction of other endangered and threatened animal species.

Walking with the lions

The big attraction at Antelope Park is called the Lion Walk.  Each morning and afternoon, 5-10 tourists head out with two trainers and two 18-month or younger lion cubs.  The idea of the walk is to get the lions used to being in the bush and possibly begin hunting small game.  The last morning we were at the park, two of the cubs killed a baby impala while on a lion walk with tourists.  After these cubs reach 18-months of age, they will then begin getting ready for stage 2, where they will have to hunt and kill for themselves. 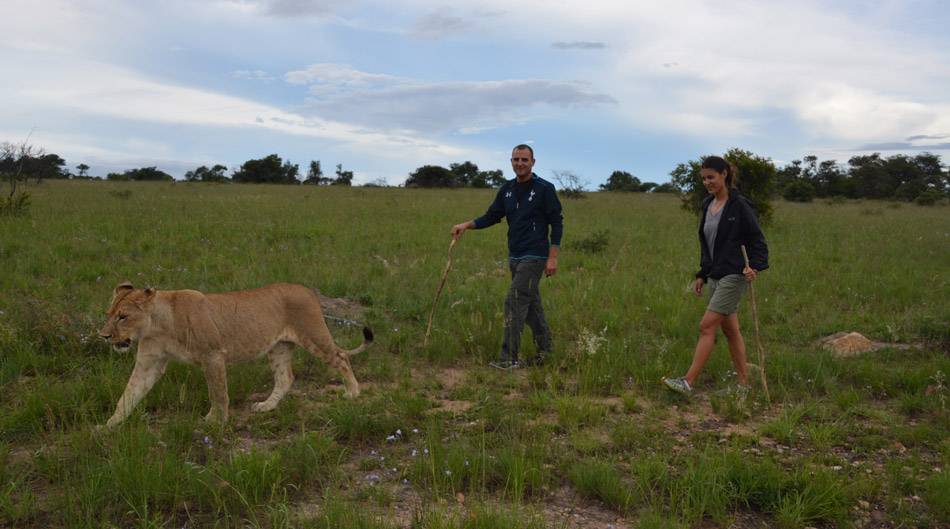 It is a little nerve-racking at first to be walking along with these incredible animals.  Although these are stage one cubs, so technically they are captive-bred, they are still wild animals that can be unpredictable.  It is fun watching the lions explore the environment around them, and since these two lions ate yesterday, they are also being quite lazy.  It’s fun to watch them stop every once and a while and lay down for a rest.  Their laziness also makes for good photo opportunities as well.

Eating with the lions

One of the more exhilarating experiences at Antelope Park is called the Lion Feed.  In order for the park to determine which males are the dominant males, they simulate a kill in the wild, and have five or six lions feast on it.  Today, there is a mound of raw chicken and fish directly in front of us (on the other side of the fence of course).  The trainers open the gate and the lions charge towards us at full speed and fight over the best position at the “table”.  It is really cool to see, and although these particular lions will never be released into the wild, they are still able to contribute to the cause by participating in this unique attraction which helps raise money. 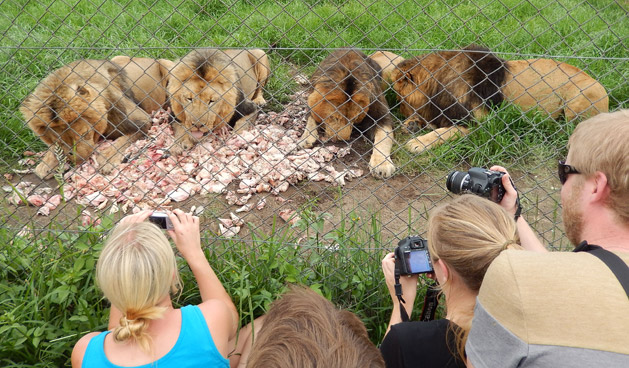 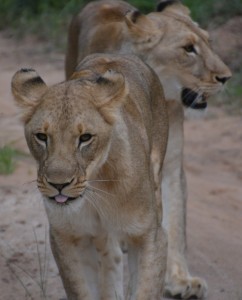 This program is in an interesting stage right now.  The for-profit wing is doing really well, and there seems to be a lot of great things on the cusp for the nonprofit side in the next few years.  Programs like these don’t succeed overnight, especially when their entire conservation method is new.  The biggest hurdles that the nonprofit is facing are now more political than financial.  It isn’t easy to convince governments in Africa to allow an organization to release lions into the wild.

The criticisms probably won’t be going away anytime soon, but with any new method of solving a problem, it won’t be until the problem gets solved that the naysayers go away.  Those naysayers once said that the lions bred here at Antelope Park would never be able to hunt on their own.  Well, last night we watched those same lions kill a wildebeest.  I’ve always been a fan of problems within an industry that get solved from someone outside the industry.  The company InnoCentive even charges corporations thousands of dollars to have their problems solved by “outsiders”.  So it is no surprise to me that traditional conservation programs don’t seem to like what is going on here, but maybe thinking differently about this problem is exactly what is needed to begin winning the conservation battles.  Hopefully soon there will be some lions released by ALERT into the wild that can confirm once and for all that this method can work.

All I ask is that before you form an opinion on Antelope Park, please visit it for yourself.  The managers and owners there are more than willing to talk to you about their program and what it is they do.

Don’t forget to watch the video of all the action described above: https://www.youtube.com/watch?v=AAkpUxsP_u8

3 Responses to VIDEO: Our Time with the Lions of Antelope Park