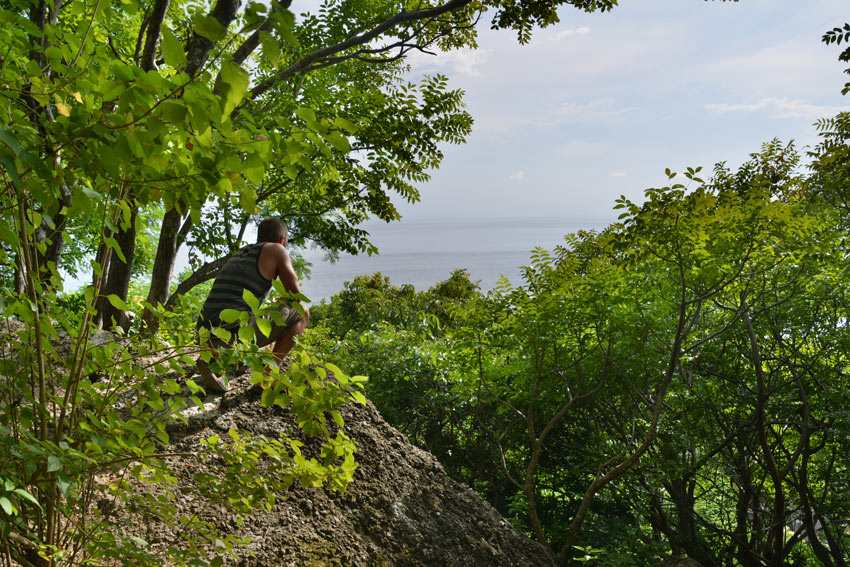 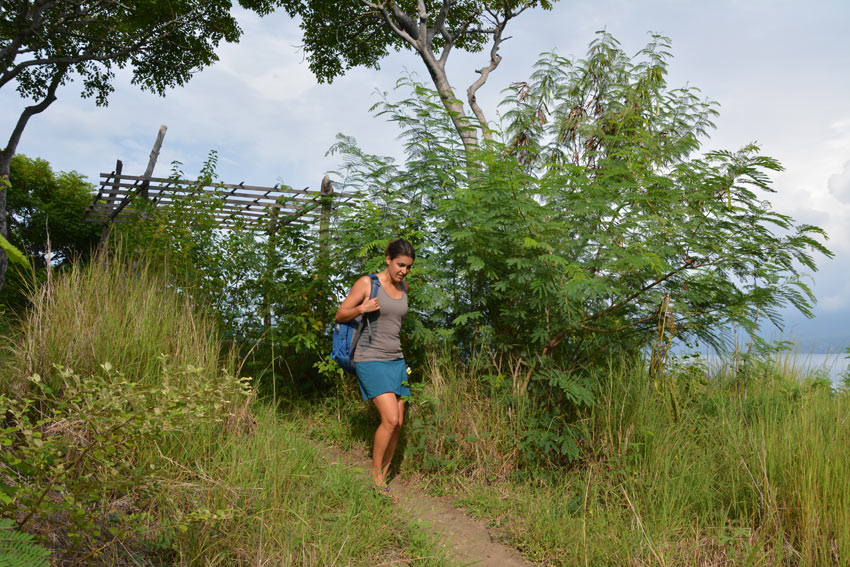 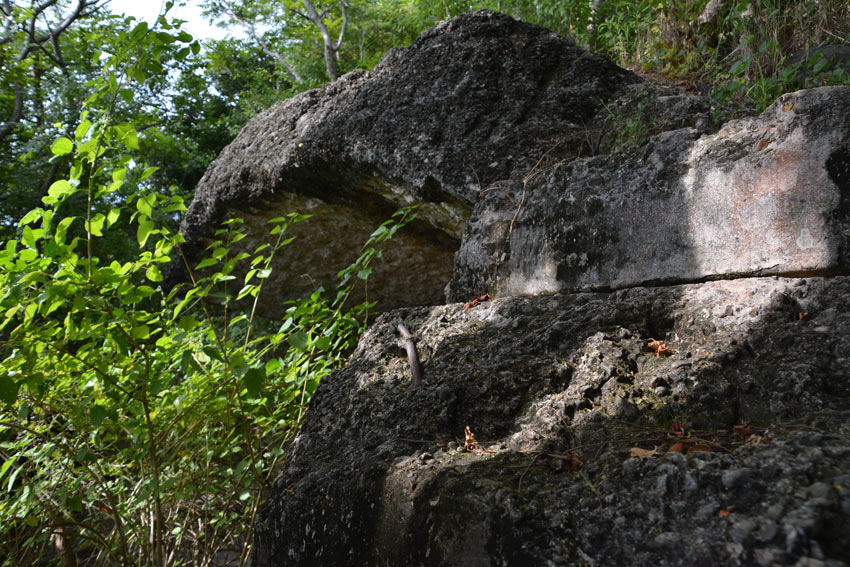 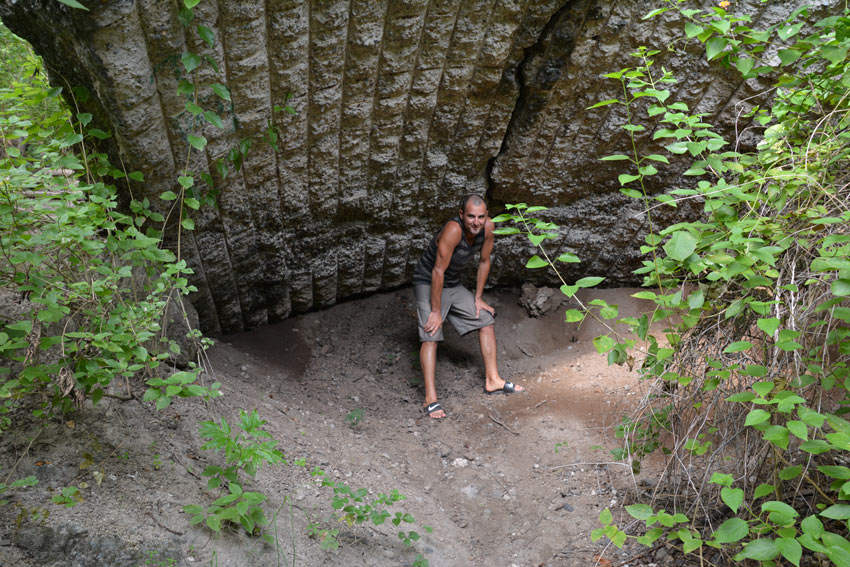 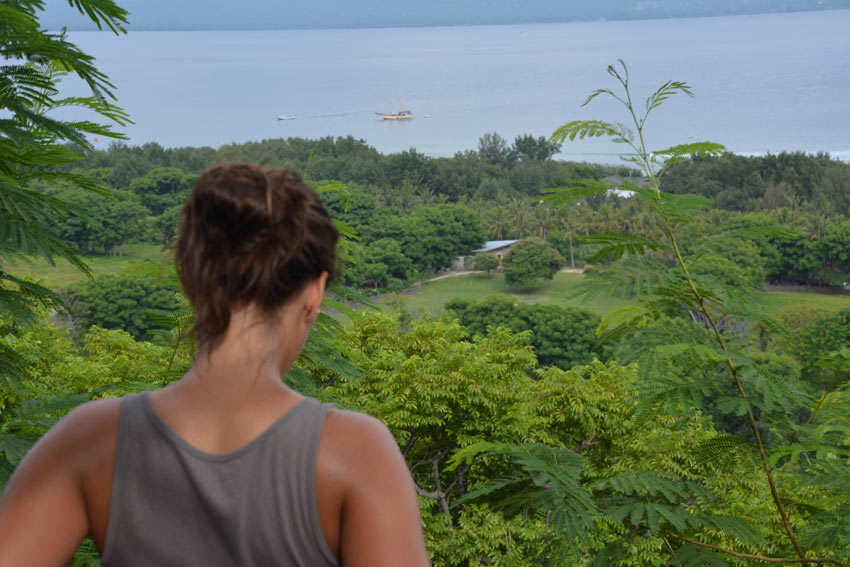 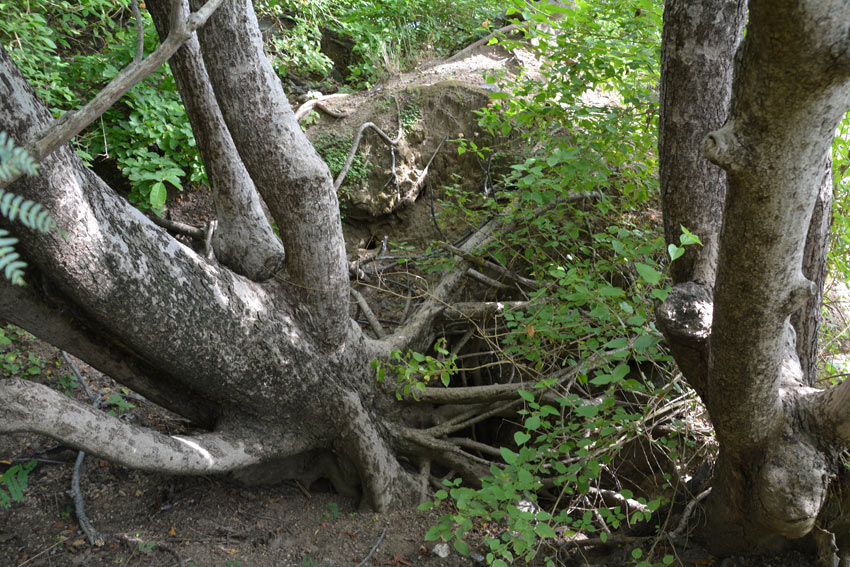 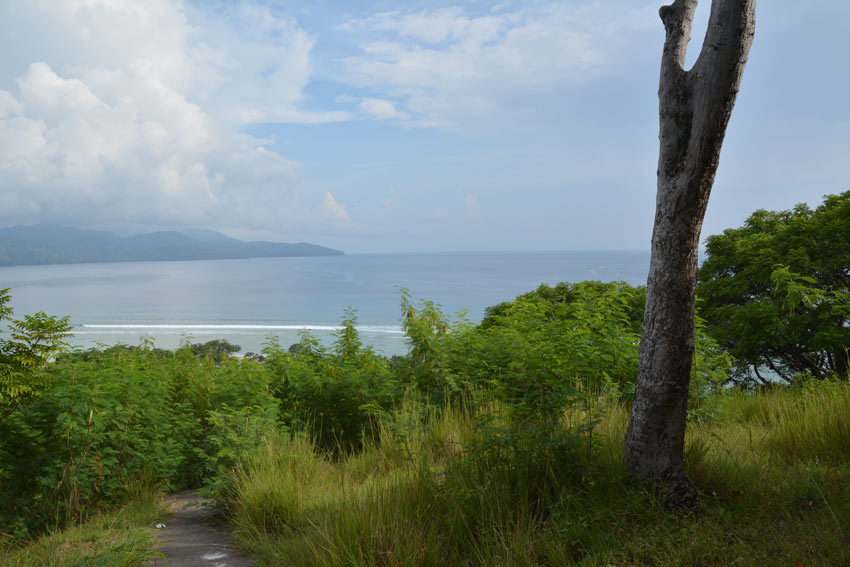 When visiting an island in Southeast Asia or the South Pacific, there is a very good chance that the island you’re on was occupied by either Japan or the United States in the early 1940’s, even if the occupation consisted of only  a few dozen men.  Reading about historic WWII sites is one thing, finding them is another.  Google is obviously a good guide for finding sites on more popular islands, but many times the best history is found by asking the locals for help.  When in doubt, another way of finding the sites on these islands is to simply head to the highest ground and look around.  Here are two stories from our recent travels, both involve finding a former WWII lookout post; one Japanese, one American.

Port Vila is just a stopping point for us on our way to a more adventurous Vanuatu island, and we’ve decided to stay with a local family in a small village outside of city called Pango.  During WWII, Vanuatu was actually called the New Hebrides, and wasn’t renamed Vanuatu until 1980 when they gained independence from the French.  The Americans actually had one of their largest Pacific bases in the New Hebrides, but it wasn’t on this island, it was actually on the island known as Espiritu Santo.  The island we’re on right now, Efate, wasn’t used too much during the war, and only served as an air base and storage facility for the U.S. and Australian forces, but I have decided to hunt down some WWII history here anyways. 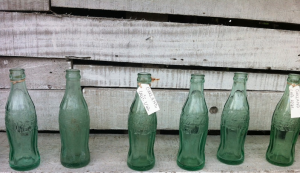 There is little information available on Google, so I have decided to ask our guesthouse owner, Allick, for some help.  He talks of stories from his dad and grandfather about what life was like in the village during WWII.  His grandfather remembers the Americans building the island’s first road, as well as bringing goodies like Coca-cola, cigarettes, and candy.  Alick even shows us some Coke bottles left over from the war that his grandfather gave him, each one embossed with “San Francisco, 1942”.

Alick has offered to take us up to the highest point near the village that once served as the look-out spot for American soldiers stationed here.  He says there was once a large telescope placed up there, and that some of the telescope remains can still be found. And although the thought of another hike is tough to swallow after our volcano trek, I still immediately accept his offer. 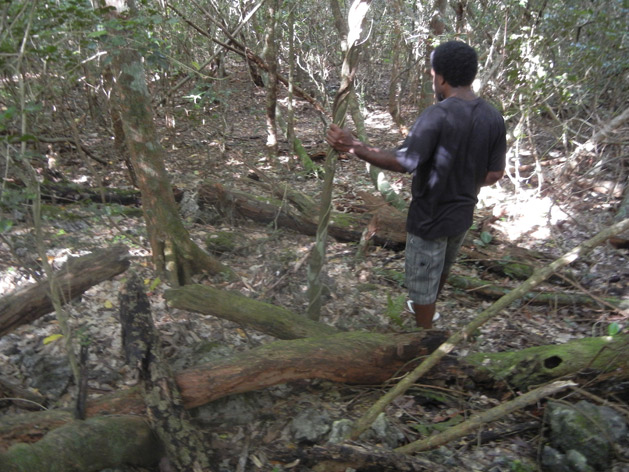 After about an hour of walking through thick jungle, we come across a large hole in the ground.  The hole is about 10 feet deep, is over-grown with trees and roots, and have large boulders at the bottom.  Alick tells us that there are five or so of these holes on this hill and that they all contain left-over bombs and ammo from the Americans.  When Alick was a kid in the 70’s, he and his friends would dig up the unused bombs and light them off as fireworks.  Wow.  The mothers in the village eventually decided this wasn’t safe and convinced the men to dump large boulders into each hole to prevent the children from digging any further.  We pass another four or five filled in holes on the trek, all with old ammo buried deep below heavy boulders. 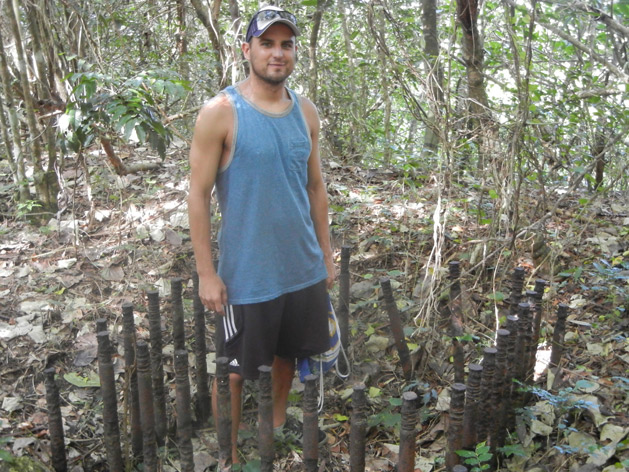 As we get close to the top of the hill, we come across a large piece of scrap metal.  It is about a meter long and looks like it used to be some sort of axel or pivot on the old telescope.  It’s so heavy that the three of us together aren’t even able to lift it to flip it over.  This is the last remaining piece of the American telescope that hasn’t been removed for scrap.  I wonder why! 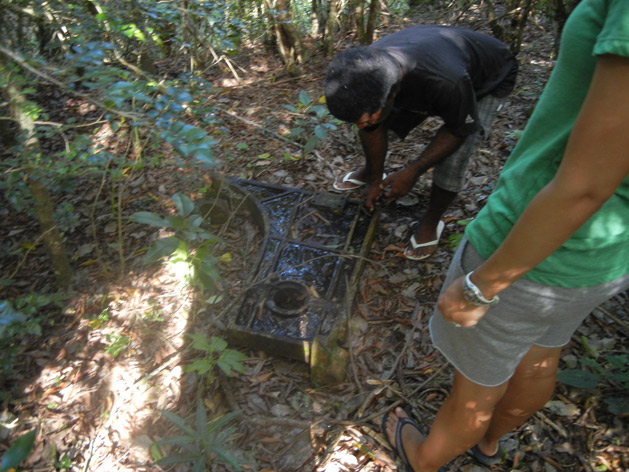 Finally we reach the top of the hill and Alick uses his bush knife to clear some vines in front of us so that we can see the view like it was 70 years ago.  The view is great and it’s comforting to know that the locals who lived here and the Americans who were stationed on this hill never saw an enemy ship.  On our way back to the village we find out the U.S. is still helping this small country when Alick tells us how the main road on this island was paid for and built by the United States. 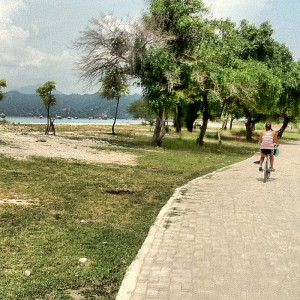 We’re staying here on Gili Trawangan Island, a small island around Bali, for five of our 20 days in Indonesia.  This country has been great to us, and we’ve spent our days lounging around and exploring what Bali has to offer.  But it has been weeks since I last visited a WWII site, and I’m itching to do some more  searching.  There are not many above ground WWII sites to see around Bali, as most of the action here happened in the sea.  Even though Bali was occupied by the Japanese for the duration of the war, it never saw fighting since the Dutch Army on the island.  When I heard there was an old Japanese bunker on the top of this small island, I knew it would be unique to see what is probably the only remaining WWII site around Bali.

Gili Trawangan (Gili T for short) is an island small enough to not need any motorized transportation, and cars or motorbikes are not even allowed.  In fact, it takes only about 45 minutes to bike around the entire island.  Alissa and I have set out early this morning on our rented bikes to complete the 45-minute ride as well as stop and look for the entrance to the path up the island’s only hill.  Our instructions to find the old bomb shelter are simple: find the cement staircase entrance to the path, walk up the path until we reach island’s highest point, then walk ten meters down and look for the remains of the bunker. 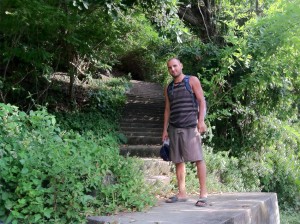 The bike ride is pretty uneventful, and after we pass a few possible entrances to the path, we finally see what HAS to be the one we’re looking for.  It’s cement, it’s steep, and it’s near the island’s biggest(only) hill.  We park the bikes and begin the trek.  Based on my map, it shouldn’t take us longer than 15 minutes to walk to the top of the hill, but that was before I calculated in “flip-flop factor”… the amount of time lost slipping, stumbling, and stubbing toes due to our poor choice of footwear.

Because we came up the back of the hill, we end up seeing the bunker before we reach the top of the hill.  The bunker is actually situated more in the jungle to conceal itself from enemy aircraft.  We decide to pass it for now and head to the top for the view first.  After being on this island for four days, it’s great to finally see it from above and take in just how small it really is.  The hill was steeper than I expected, and I’m sure the Japanese soldiers who were stationed here had a hell of a time dragging cement and materials up this hill back in 1945.

We head back to the bunker to see what kind of toll 70 years has had on it.  We are surprised to see it in such decent shape and form, with only one major crack in it.  There are no photos of the bunker from 1945, but I can’t imagine it looked that much different than it does now.  It basically looks like a giant clam hidden in the jungle under a canopy of trees.  The structure still feels very solid, and I’m even able to climb on top of it and get a better idea of the view the Japanese had from here. 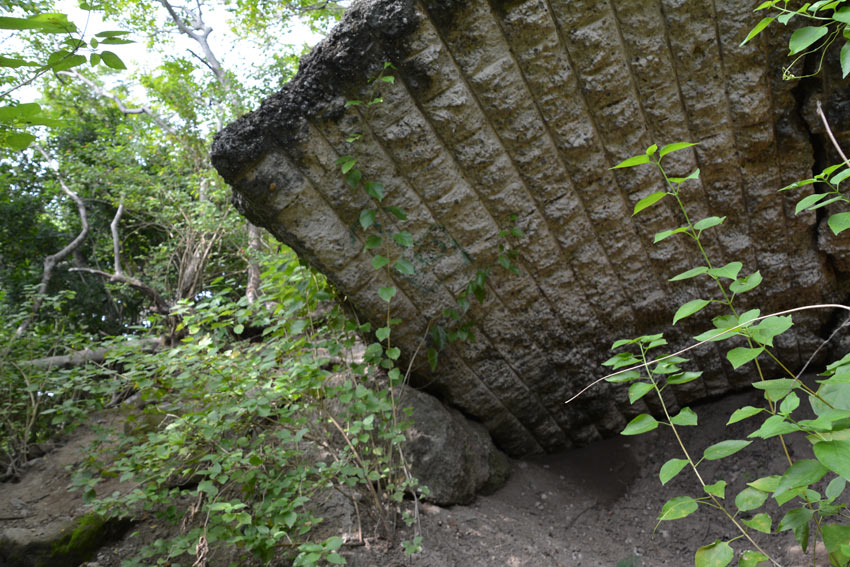 One Response to One War, Two Island Lookout Posts