Just A Day at the Ballpark: Japanese Style

We arrived in Hiroshima by train at about 2pm today, with absolutely no clue on what to do tonight.  We had a reservation at a local hostel, but we didn’t take the time earlier this week to research nightlife in the city.  After our high-speed train arrived to Hiroshima’s main terminal, we took a streetcar tram to our guesthouse.  While on the streetcar, I thought it was interesting that two different children on the car each had Cincinnati Reds hats on.  That’s when I remembered just how popular baseball is in Japan, and after asking around I found out these hats were for the local Hiroshima team, the Hiroshima Carp, who share the same logo as the Reds.  Better yet, they have a game tonight!

Heading to the park

It’s Friday night and the Carp are playing the Tokyo Yakult Swallows, one of the two big teams from Tokyo, so I am hoping we will get to see a nice crowd and some good baseball.  The Swallows are also the former team of Milwaukee Brewers outfielder Norichika Aoki, and now have found a new star player in former Major Leaguer Lastings Milledge.  That should make me want to root for them, but I can’t possibly NOT pull for the home team after meeting all these awesome fans.  Plus, two-time former Brewer, and World Series Champion Alex Ochoa once played for the Carp.  That’s enough reason for me to cheer for the Carp.  Japanese baseball is considered to be the best league outside of MLB, with a competition level slightly above the AAA Minor League level in America (scouts sometimes call it AAAA baseball).  When you add all of this together with the fact that I haven’t seen a live baseball game since September, it creates an extremely high level of excitement in me as we are walking to the stadium. 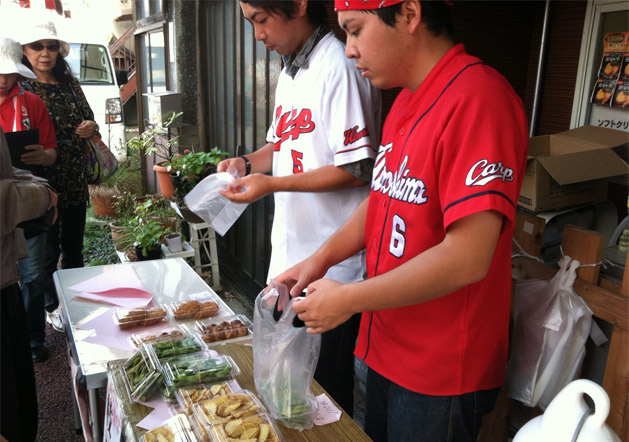 Along the sides of the road are vendors selling everything you could possibly need for a baseball game.  Cups of beer, fried potatoes, peanuts, even edamame!  We are told you can carry nearly any type of food or drink into the stadium, which reminds me of Miller Park in Milwaukee.  Each step we take makes me feel more at home, yet so many things are also different.  Today is by far the most contrasting feelings I’ve had on this trip of both experiencing things that are both so similar to home alongside things so foreign.  For example, the walk up to the stadium is just like the walk into a baseball stadium in the U.S.  It is just starting to get dark, the crowd is buzzing with excitement and chatter, and their are young fans everywhere donning the jersey of their favorite player.   This all seems eerily like my home, until I look to my right and see two men eating french fries and nachos with chop sticks at one of the street vendor booths.  Hey, we look just as funny to them when we eat with our hands and get it all over our shirt. 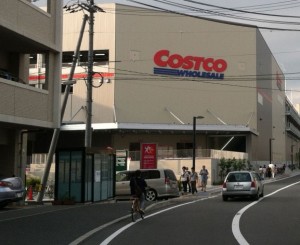 As if we didn’t feel enough at home already, we are now told that there is a Costco next to the stadium that sells cheap hot dogs and pizza.  I haven’t had a real hot dog in six months, and we immediately move towards the direction of Costco.  Like true Americans, Costco is like a magnet, and we are naturally drawn towards it.  As we approach Costco, we see hundreds of fans walking towards the stadium with full pizza boxes.  Costco has an outdoor food booth that sells American style hotdogs, pizza, chicken sandwiches, and they even have fountain soda!  After four months in Southeast Asia, this is the meal I’ve been waiting for!  We proceed to order two slices of pizza, four hotdogs, and two sodas.  Our bill is only $10 USD, and we pack up all our goodies and head to the game. 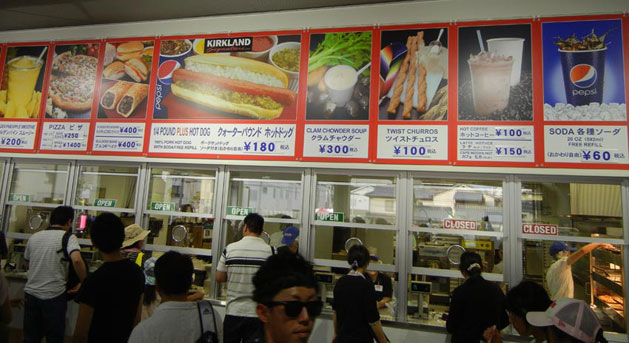 Everything inside the stadium feels familiar to us, although it is more like a bizarro world atmosphere because everything is just slightly different then a stadium in America.  The food stands have ramen noodles, squid tacos, seaweed wraps, as well as the newest way to drink a beer.  The beer is poured like normal, but then they add a layer of creamy beer frost to the top.  It’s like a frosty from Wendy’s but with beer flavor instead of chocolate.  It’s awesome!  I can’t help but think how this beer concoction was created.  I want to believe that it was a person who loved both beer and ice cream and woke up one day with an epiphany to combine the two.  However, we are in Japan, so it probably was a Japanese efficiency expert who said “Hey, I have a way to only fill the beer cup 75% of the way, AND charge an extra two dollars!  All we have to do is add some icy foam at the top!” 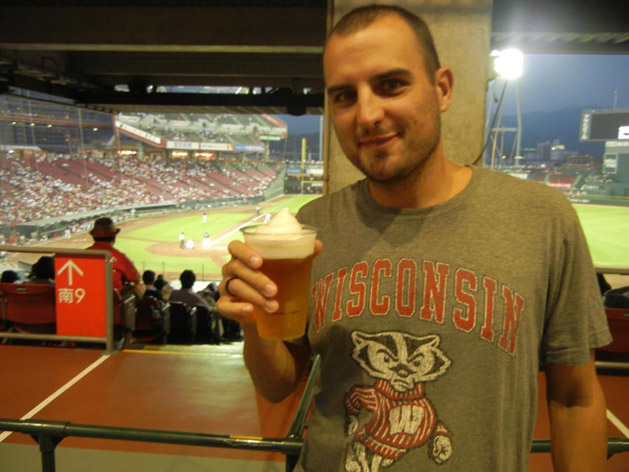 We are also in awe by just how clean this stadium is.  You could eat off the floors of the concourse.  If anyone drops a piece of garbage (which they rarely do), someone is by within seconds to clean it up.  The garbage bins are not the typical American XXXL cans, but instead they are an intricate system of 10 different bins for every type of waste.  We are so impressed by the Japanese people’s dedication to recycling.  Even at baseball games, nothing is thrown away that could be recycled.  I can’t imagine what would happen if they put a garbage system like this in Miller Park or Yankee Stadium.  Could you imagine a drunk Brewers fan walking up to these 10 bins with an empty plastic nachos tray?  He would just stare at the bins and throw the nachos in whichever one looked the most empty. 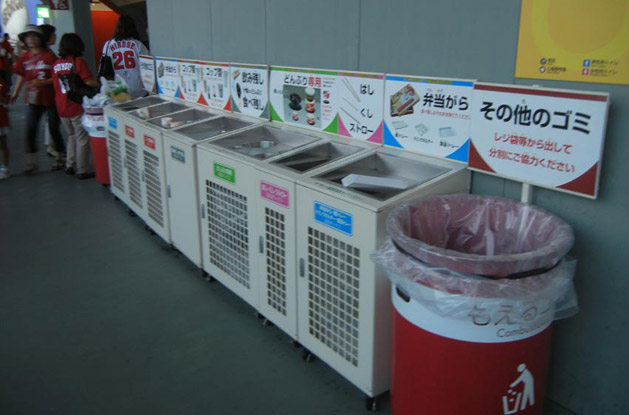 The level of play on the field is definitely as advertised.  It looks and feels like a AAA game, and the crowds intensity level is amazing.  It feels a lot like a soccer crowd, and Alissa and I choose to sit in what’s called the Performance Section.  This is the section responsible for constantly cheering and singing.  And although it’s in Japanese, we are able to follow along.  Each fan in the section has two small, plastic baseball bats, that when banged together make a loud clapping sound.  The front row of the section has trumpets and drums and leads all the cheers.  They only cheer when the home team is batting, and it looks exhausting to be one of the leaders in the front, especially the trumpet players.  In the second inning, the home team go on an extended rally, and it is obvious the trumpet players want the rally to end.  You can see in their body language that each hit is just extending their misery. 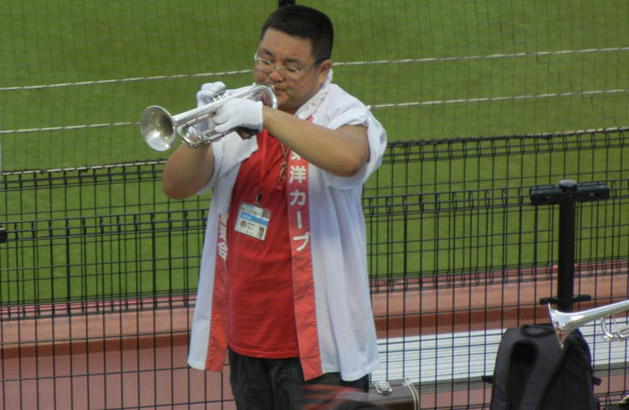 After 30 minutes of blasting into his horn, this guy can’t wait for the rally to end.

Much to our displeasure, the score is tied 4-4 going into the 8th inning.  In the U.S., this is no big deal, as every baseball game ends with a winner.  But in Japan, they only play three extra innings before calling the game a draw.  A draw?  In baseball!  Luckily the Carp battle it out and win it in the 10th. 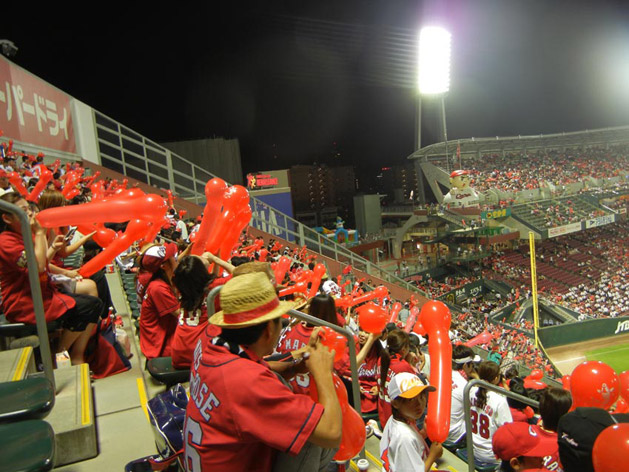 There was also a cool moment in the seventh inning when the entire crowd blew up a balloon, did a little choreographed dance, then all let them go into the air at the same time.  Check out the end of the video at the top of the page to see it.  If you head to Japan, we highly recommend taking in a baseball game, regardless of the city or team.

The two side-kicks to the team mascot were dressed as some sort of ninjas.  All black, with their faces completely covered.  Super creepy.  Here is a picture of them doing some sort of dance between innings in right field: 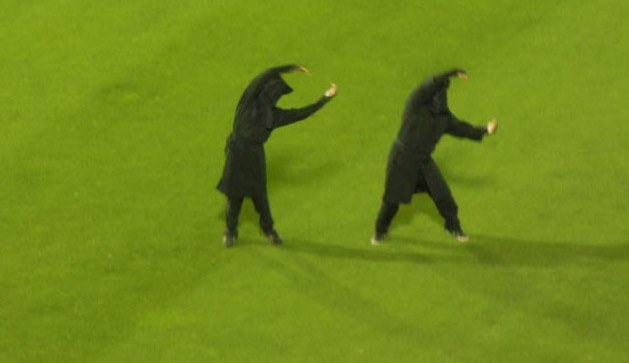 One Response to Just A Day at the Ballpark: Japanese Style