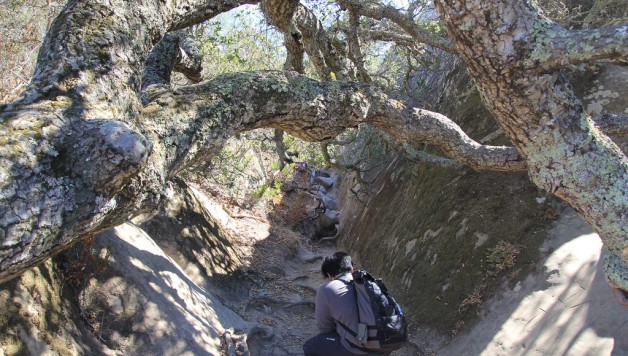 The Scariest Trails In The World

If you think hiking is mundane compared to biking, skiing or base jumping, then think again. There are some hiking trails out there that are a true test of your nerve and your endurance. Put a foot wrong on these trails, and you could be history.

Machu Picchu is the world famous site of an ancient Inca town. The town itself was about as close to the Gods as the Incas could build, high up in the Andes. Above the city stands the peak of Huayna Picchu. Not even the ancient Incans wanted to build up here. And can you blame them? The rock itself ascends at a 45-degree angle, standing more than a mile above the ancient ruins.

Each year many people attempt to scale the trail that runs up to the top. The locals call it “The Hike Of Death.” And when you consider that the route itself is rotting and falling away from the mountainside, can you blame them? If you want to climb Huayna Picchu, you’ll need the right gear and good fitness even to stand a chance.

Have you seen the film 127 Hours, where James Franco gets stuck in a rocky canyon and has to saw off his arm? Yes. Well, the Maze is just like that. It’s a series of giant rocks, thrown up by the movement of the Earth’s crust. And in between then are deep ravines, only a few feet wide, that descent down into the bowels of the Earth. It’s a place renowned for its overwhelming danger and difficulty to navigate.

Until now, the Maze hasn’t claimed any lives. That’s mainly because the danger of the place has been so well publicized. Most people who travel here stick to the official tours. Only a few nutcases actually venture out into the park unaided.

When visitors first arrive at China’s Mount Hua Shan, they convince themselves that it’s a joke. How could anybody think it was a good idea to chain a few crumbling planks to the side of a mountain? Well, it turns out it’s not a joke. The mountain is home to religious temples on its peak. And pilgrims have for centuries climbed its rickety paths and wooden ledges. There are some safety precautions, of course. For the most dangerous sections, travelers can hook themselves up to iron chains. Sometimes, wooden planks are absent, and you’re just supposed to climb yourself around the cliff face.

The Chinese are very hush-hush about the number of people who die on the peak each year. Unofficial estimates put it at 100. On the plus side, it’s a great place for taking photos.

As many film buffs know, New Zealand’s mountains were the set for the Lord Of The Rings. And Cascade Saddle is one of the most epic examples. As in the film, the mountain has claimed many lives. According to the figures, 12 people have died trying to traverse the 11-mile route from one side to the other. Most of the victims slipped on rocks and fell to their dooms. So it’s definitely a place to wear grippy footwear.