New Year’s Eve in Dubai Without Spending a Fortune 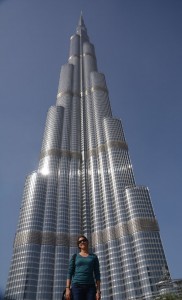 Dubai is an amazing city.  Millions of people, dozens of ethnicities, countless skyscrapers, and always a new world-record being broken. We had mixed feelings about visiting a country with so many shady practices and awful stories. (If you don’t know what I mean, read “The dark side of Dubai“, an incredible, shocking article. But curiosity about this mega city won us over, not to mention a flight-hacking layover here got us the cheapest flight from Sri Lanka to Nairobi.

We landed at 6am and got a cab to our hotel. We were immediately wide-eyed at the skyline, especially the towering Burj Khalifa, the tallest building in the world, visible from miles and miles away. We spent the first day getting comfortable with the metro system (easy), checking out the Burj, and buying sleeping bags for our upcoming Africa camping trip.  We also broke our 40 day vegetarian streak with some delicious shawarma for dinner.  Shawarma is a Dubai staple, consisting of roasted chicken, beef, or lamb sliced off of huge skewers and wrapped with veggies and sauce in warm pita bread.  Shawarma cafes are the cheapest meal option and they are everywhere, making them our go-to meal in Dubai. 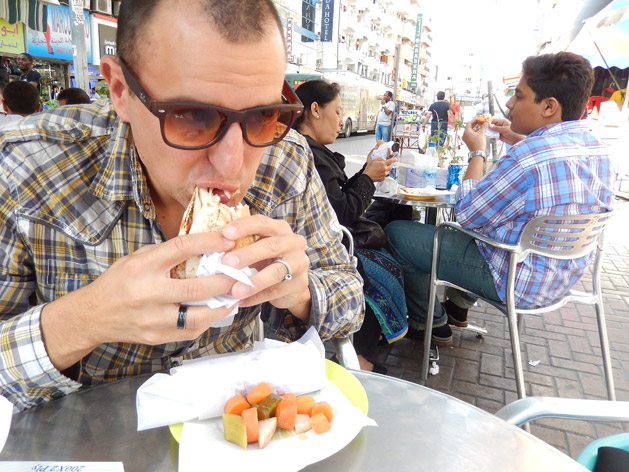 Dan scarfing down meat for the first time in 40 days.

We also researched some ideas for New Year’s Eve, and quickly decided that a $200 USD cover charge for a hotel party was not in our budget (although I was tempted by one that boasted Vanilla Ice as the headliner). The man-made palm tree shaped islands and its resorts were scheduled to break a world record by shooting off 450,000 fireworks in 6 minutes (the current world record is owned by Kuwait, a measly 77,000 fireworks in one show).  We figured the tickets to watch the show from the islands were probably overpriced, since a show like that could be seen from anywhere.  We settled on Jumeirah Beach, a public beach directly across the bay from the big show. 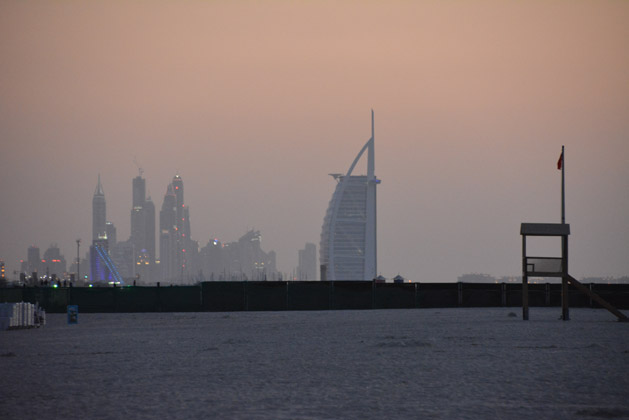 View of the Burj Al Arab Hotel from Jumeirah Beach.

After a delicious lunch of more $2 shawarma, we went shopping for some picnic supplies.  We settled on pitas and veggies with cream cheese, chips, fruit and cake for our dinner on the beach.  Dan decided we should get buckets to carry everything in then use them to sit on on the beach and stand on them if we needed to see over a crowd.  We bought wine from the hotel and concealed it into juice bottles since drinking outside of hotels is illegal. Finally, we bought a few bus passes and set off carrying our buckets, ignoring the curious stares. Total cost of our supplies: about $50. 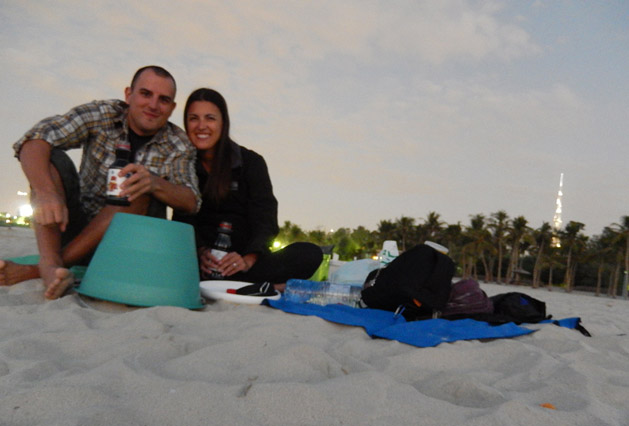 Picnic on the beach with wine in juice bottles.

We start our bus trip to the beach early, to leave us some time to get a good spot even if we get lost.  We navigate the metro then a bus, find the beach park, and walk through it to the beach.  We expect to see what we would see at a firework show in the U.S: people marking off their territory, weeks in advance.  However, we see the opposite…nobody is here.  So much for fighting through the crowd.  We have plenty of room to through a frisbee around then unpack and eat our picnic. We start on the wine, and realize its still only 7pm. All of the ads for the downtown fireworks said to get there by 8pm, so we thought the beach would be just as packed, but it’s not. 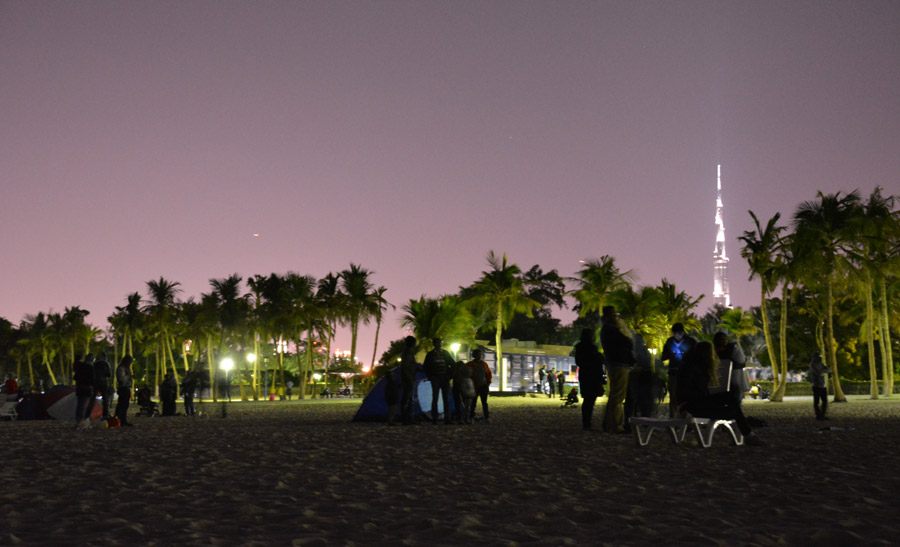 Getting closer to midnight on Jumeirah Beach!

We waste some more time with the frisbee and read our Kindle books, walk up the beach and around the park, and get coffee at a shop in the park. We head back to our spot to find its still there, but now there are at least 10 people on the beach. Good thing we were early… But we are at least enjoying the relaxed atmosphere. It sure beats being packed into a fenced-in area in front of the Burj with half a million people!

When midnight does finally roll around, our spot is still secure as we wait for the fireworks with a few hundred people spread out in small groups.  A few scattered countdowns break out, and finally a bang. The Burj Khalifa’s show is first with fountains of lights streaming from the entire height of the building. 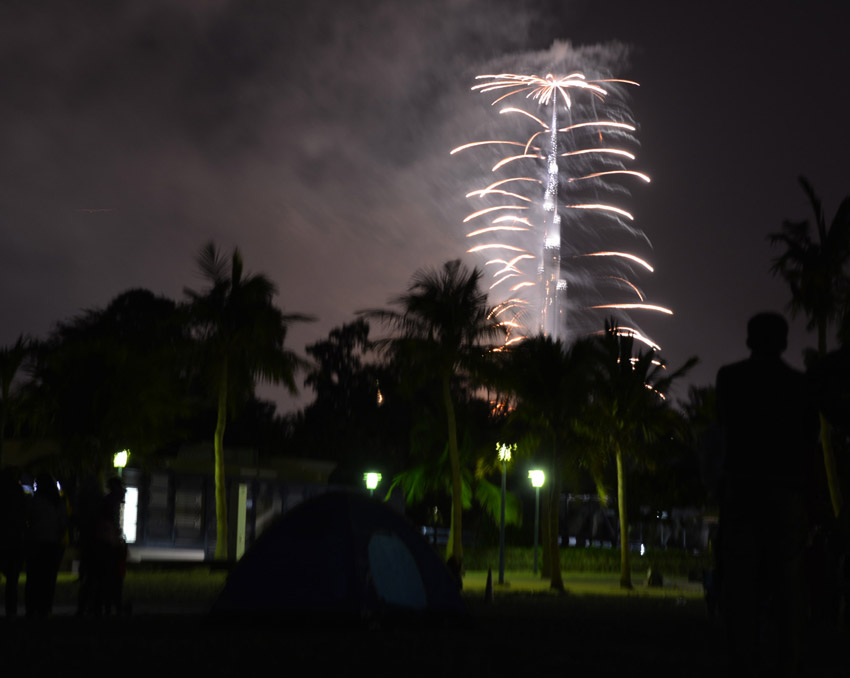 Our view of the Burj Khalifa midnight fireworks.

Next, we see some fireworks near the Burj Al Arab (the most luxurious hotel in the world with a 7-star rating!) at the base of the Palms. They are spectacular and the show is long. When its finished, we think maybe that was it? That couldn’t have been 450,000 fireworks, right? W e wait around and notice no one leaving, so there must be more.  After a long 20 or so minutes, suddenly the beach is completely lit up.  From the Palms islands to the World Islands, about 11 miles long straight ahead of us became solid fireworks.  Check out the photos and videos below, since my descriptions can’t do justice to the brilliance. We couldn’t even watch all the fireworks without swiveling our heads around to take it all in. The show was probably the coolest man-made thing we’ve ever seen.  Over-the-top and a big waste of money, but still amazing.

The final five minutes of the show left us speechless.

Here is an aerial view of the show: https://www.youtube.com/watch?v=Oo1JwImshw8