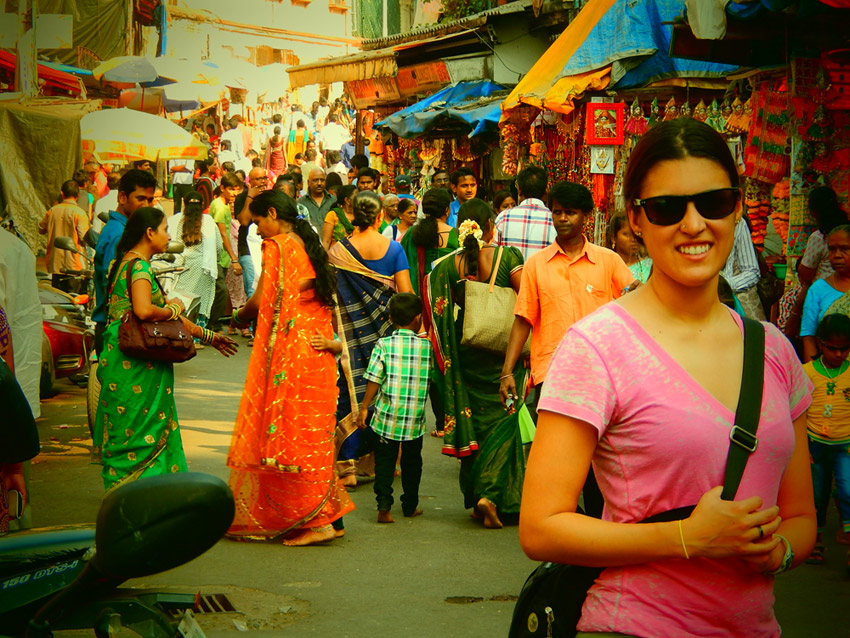 We knew from the beginning of our trip planning that India would be one of the crazier places to see.  That is why we decided to start out our month in India by visiting it’s most populated city, Mumbai (formerly known as Bombay).  The city is home to about 21 million people, which sounds like a lot until you realize that only 1.75% of India’s 1.2 billion people live here.  We are going to spend a week here before heading to more rural areas of India to get away from the crowds.  Here are our thoughts after three days in Mumbai:

– Crowded is an understatement here.  We’ve been to cities with this many people before (Tokyo, Seoul, New York), but nowhere have we ever felt this claustrophobic in a city.  Even cities that are more dense, like Manila, haven’t felt this crowded.  On the bus tour we took the first day, we passed row after row of streets crowded with both cars and people.  Every road has a crowd of people walking on it, both on the sidewalk, and then the overflow walkers spill into the streets since the sidewalks are too narrow.  The crowds seem to grow the darker it gets.  Around our hotel at night we find it hard to walk simply because it’s so crowded and we are constantly bumping into people.  It isn’t until day three, a Sunday, when we finally find a part of town that is uncrowded and quiet.  The area near what is called Marine Drive, which also is home to some national monuments, including a large statue of Gandhi. 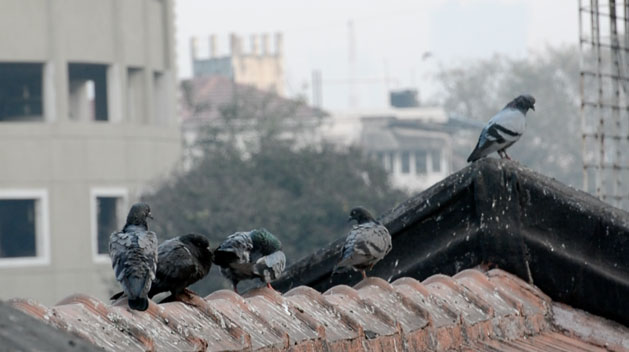 – Mumbai must also be the world’s most populated city for pigeons as well.  They are everywhere… EVERYWHERE.  I’m typing this from my hotel room and there are two pigeons sitting on the window sill.  There is an old man who sits outside our hotel and throws bags of food onto the sidewalk, attracting thousands of pigeons.  Pigeons are holy birds to Hindu (I presume), and we are constantly seeing people feeding them or giving them water.  Fun Fact:  Did you know pigeons are the only non-mammal species who can recognize itself in a reflection.  Amazing right?  They are still gross. 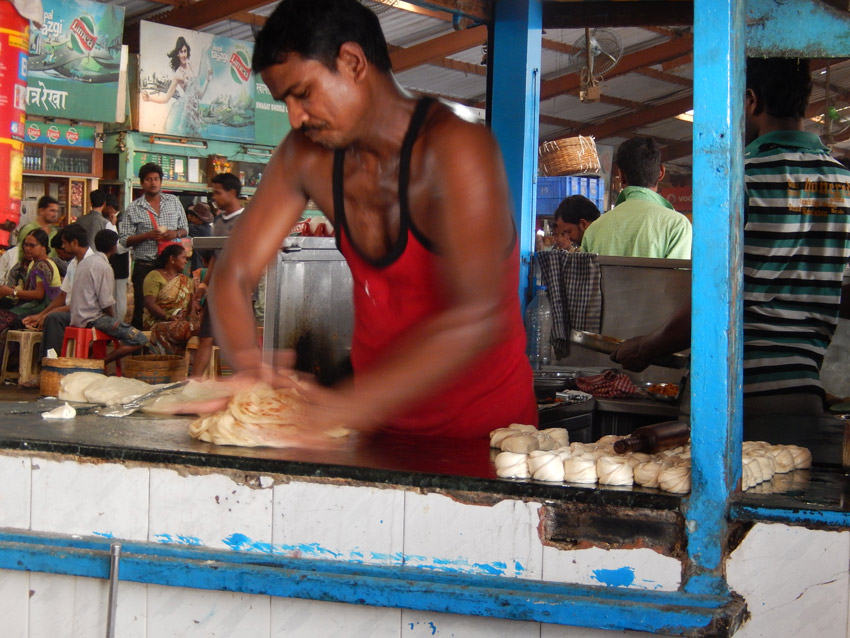 – The food has been great so far.  We are eating 100% vegetarian for our five weeks in India and Sri Lanka, and so far it is clear that we made the right decision.  However, we are also starting small and working our way up.  We didn’t get off the plane and run to a dark, street food stall and point to something.  We’ve started with hotel food and now are easing our way into restaurants, with the idea of hitting street stalls later this week before leaving Mumbai.  We both already loved Indian food before coming here, and so far our expectations have been met. 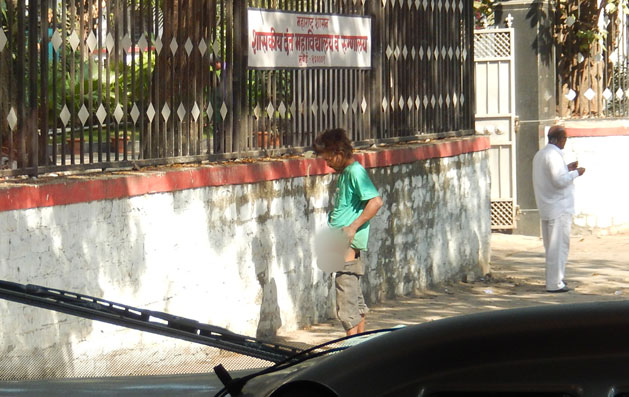 An Indian man relieving himself on the sidewalk outside our bus. 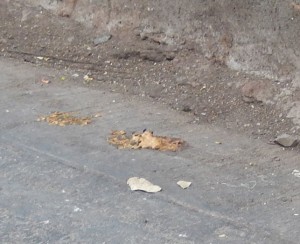 – We were warned by Dan’s Uncle that some people in India tend to go to the bathroom wherever and whenever they want.  Now, it hasn’t been a widespread issue, however we did witness one man peeing and one man shitting in on the sidewalk, both within a couple of hours of being in Mumbai.  I then had what I would call on of lows of the trip.  I stepped in human shit on the sidewalk.  Yes, HUMAN SHIT.  I then looked around for any type of water source, but all I could find was a small puddle nearby.  It was my only option was to wash the bottom of my flip flop in that puddle, and yes, while washing my shoe, I was aware that there was a good chance that the puddle was urine.  Welcome to India.

– The level of poverty here is something we had heard about, but isn’t something you can prepare for.  There isn’t a street in this city that doesn’t have at least one family living on it.  Newborn babies sleeping on a busy street while taxis and buses speed by, honking their horns, and thousands of locals walk by every day.  Everyone here is used to it, but for us it is hard to see everyday. 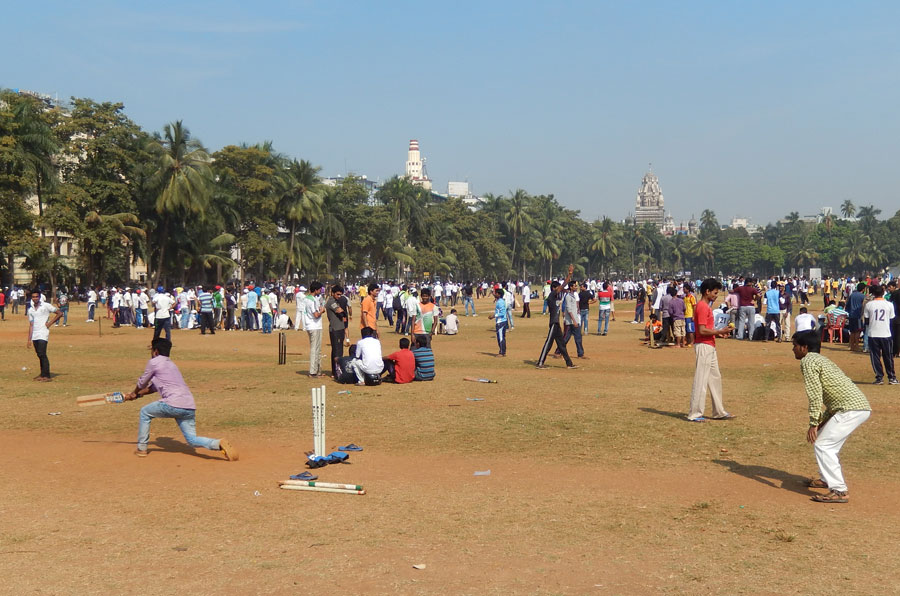 Cricket tournament with hundreds of games occurring at the same time.

– We knew Indians loved cricket, but their obsession is even crazier than we expected.  There are cricket matches everywhere within the city.  In parks, on the streets, in alleys, everywhere.  While walking through the Southern part of Mumbai this morning, we came across a cricket tournament taking place in a park.  Cricket is played in a large circle field, but because there is not enough space, the games take place directly next to each other, with fields and players overlapping.  There are 8-10 games being played in each field and balls and people are everywhere.  I’ve never seen anything like this.  Could you imagine a baseball field with 10 home plates, 10 pitchers mounds, all with games being played at the same time, all sharing the same field!?!  In terms of other countries’ sports culture, this is by far the craziest thing we’ve seen on the trip. 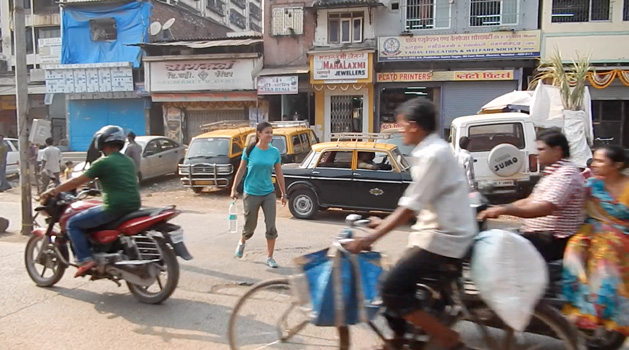 – Traffic in Mumbai is the probably the most dangerous obstacle we’ll face on this trip.  People talk about how hard it is to cross the street in Vietnam, but we’ve done the Vietnam street cross, and crossing a street in Mumbai is much more difficult and scary.  Cars here actually speed up when you try to cross to let you know they are upset at your attempt to cut them off. 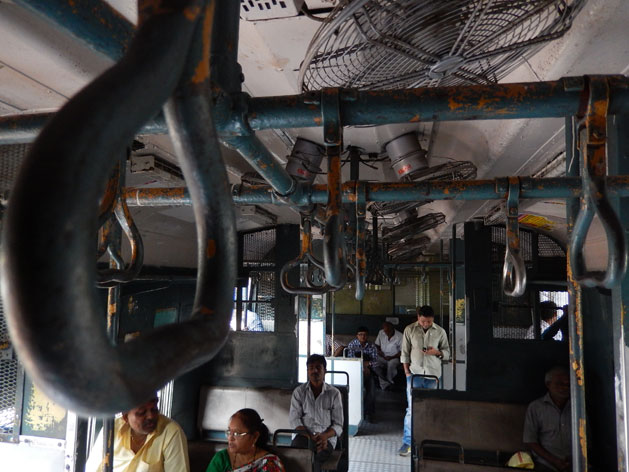 – The public transit in Mumbai is brutal but cheap.  The trains and buses are crowded and dirty, but they are also very, VERY cheap.  Days one and two we only took taxis.  The taxis are cheap ($1 can get you basically anywhere), but even though they are cheap, we still wanted to try Mumbai’s famous train network.  Yesterday and today we attempted to navigate the local trains and it was an amazing experience.  A fare on the trains here is a whopping 8 cents (USD).  Eight cents!  This is the cheapest mode of transportation we’ve taken so far on the trip, and it was really cool to see the trains up close.  The rush hour trains are the craziest, as the fill the trains to the absolute max, then add another 100 or so passengers.  People hang out of the doorway (that has no doors), as well as hang out the windows.  Nobody waits until the train is stopped before getting on or off, it is just a frenzy of people trying to get to their destination.  The picture above is of the first class train cabin on a local commuter train.  We just weren’t gutsy enough to push and shove our way on the regular train cars. 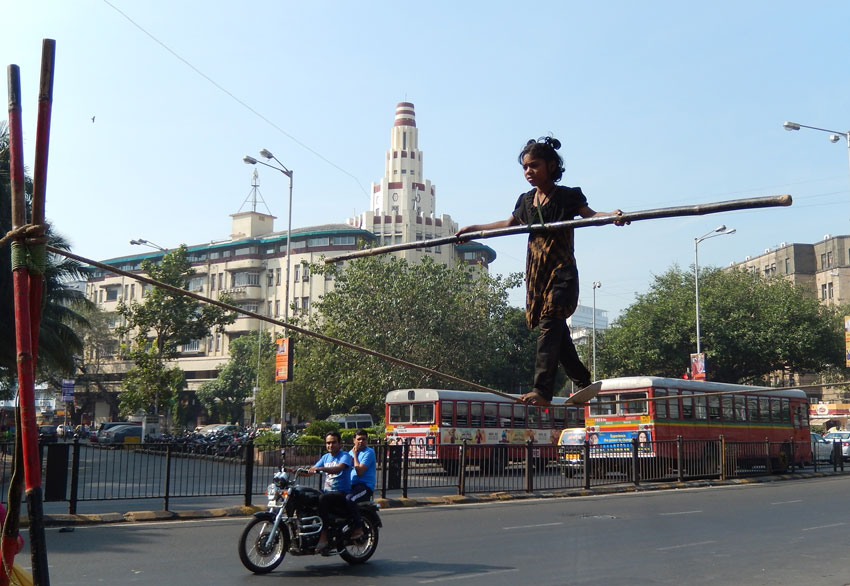 – Of all the countries we’ve visited this past year, we’ve already said “this is crazy” more times in India than all the rest combined.  Everywhere we turn we see something new that is crazy.  Whether it’s a cow dodging traffic, people jumping off a moving train, or a little girl tight-rope walking in the middle of a busy sidewalk, the craziness is non-stop.  India is a destination unlike anywhere else on Earth, and my prediction that India would be a lot like China is nowhere near true.   This country is already fascinating after 3 days, and we look forward to seeing what else it has in store for us.

Tomorrow we take a slum tour in Mumbai with a local we met.  I am sure we will have plenty of stories from that!