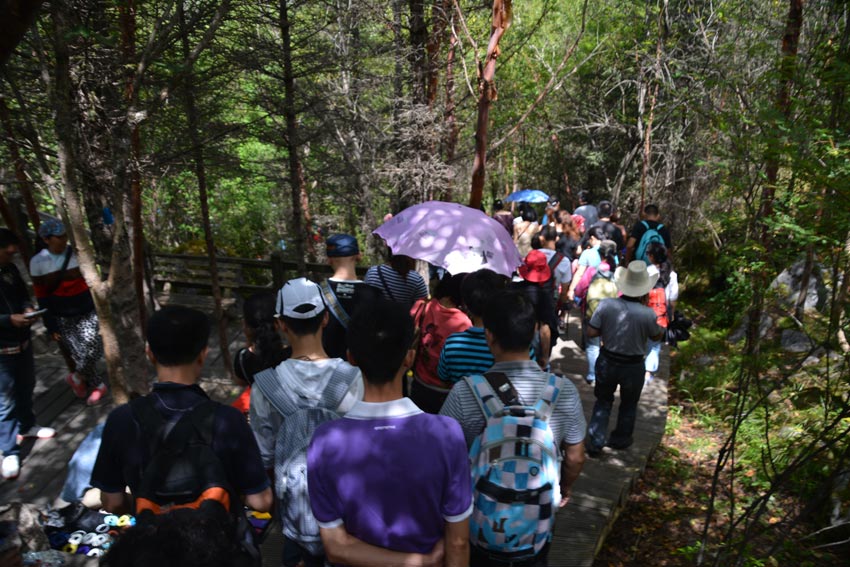 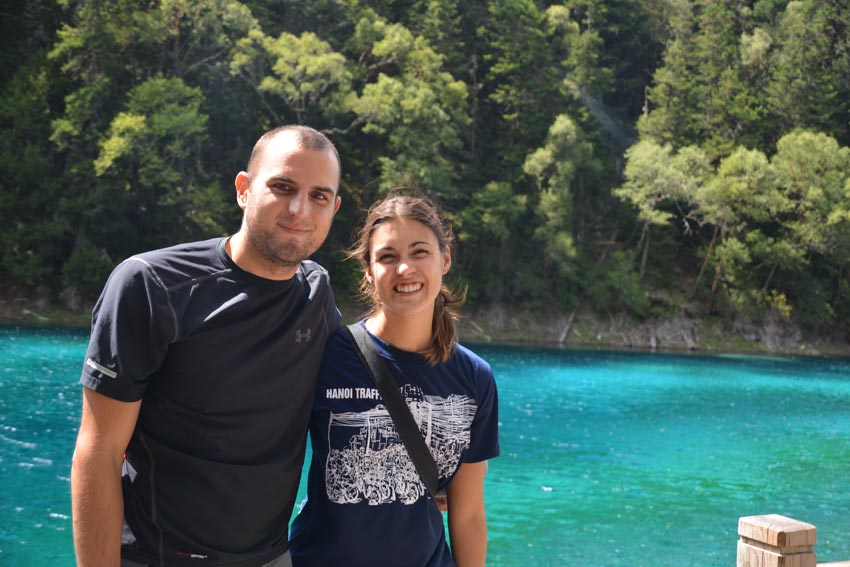 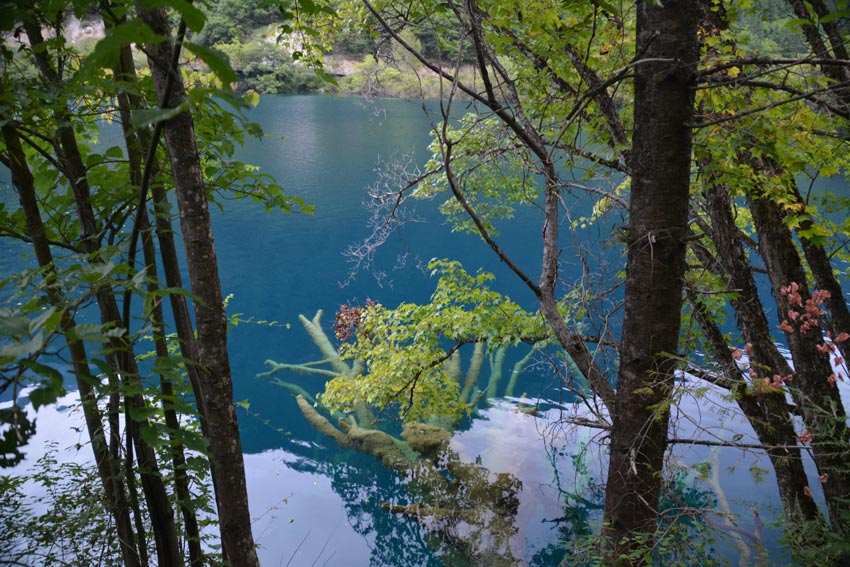 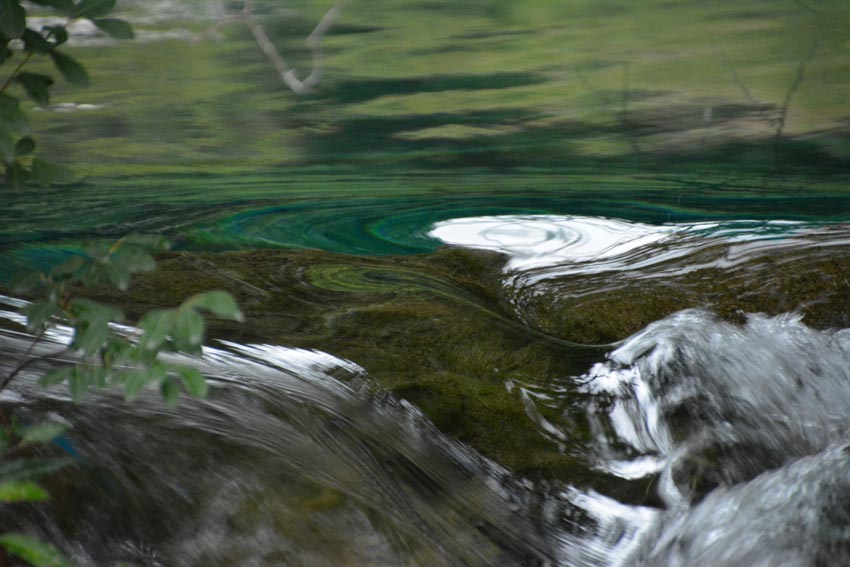 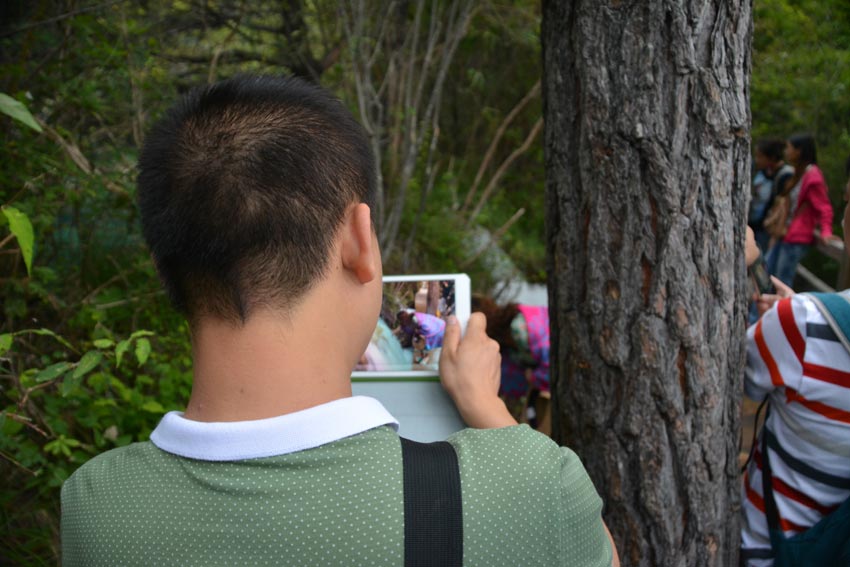 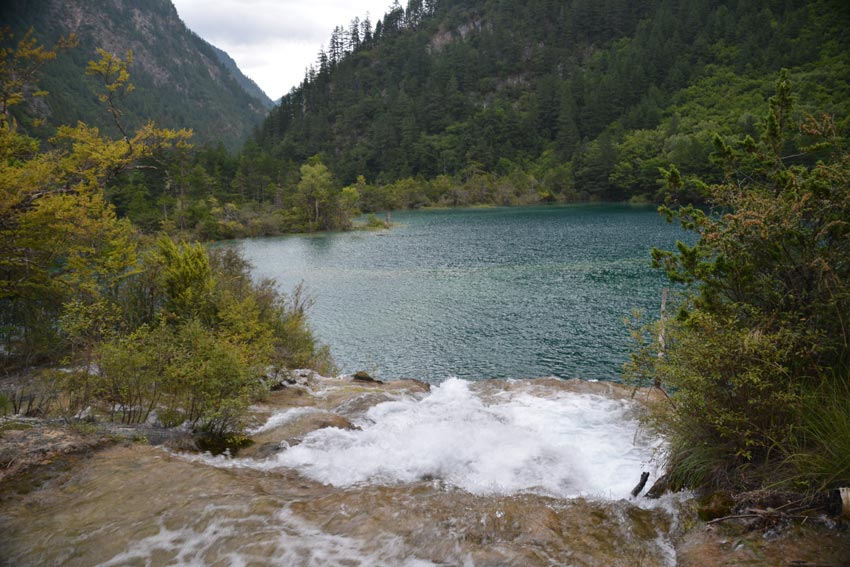 After a week in China, if you had asked me to describe it in one word, I would have said: GRAY.  Ten days in Hong Kong (7 million people), Shenzen (10 million people), and Chengdu (14 million people) have left us deprived of both personal space and blue skies.  I don’t know how the city-dwelling Chinese can handle it.  I’m going crazy, and it’s only been a week and a half.  Our visit to central China’s fresh-air-filled Jiuzhaigou National Park is coming at the perfect time. We’ve taken a 11-hour bus ride north from Chengdu to the city of Jiuzhaigou and after spending the early morning doing a fantasy football draft, we have headed to the park entrance to see this famous natural reserve in all its glory.  The park is one of China’s most popular natural attractions, drawing over 3 million visitors a year. The first thing we see when we get to Jiuzhaigou is a bunch of Chinese tourists taking pictures of the sky.  It takes me no time to realize why.  With the 365 days of gray a year in the cities, the blue sky and white clouds are actually a tourist attraction in rural China.  They only see blue skies in the movies or when on vacation. 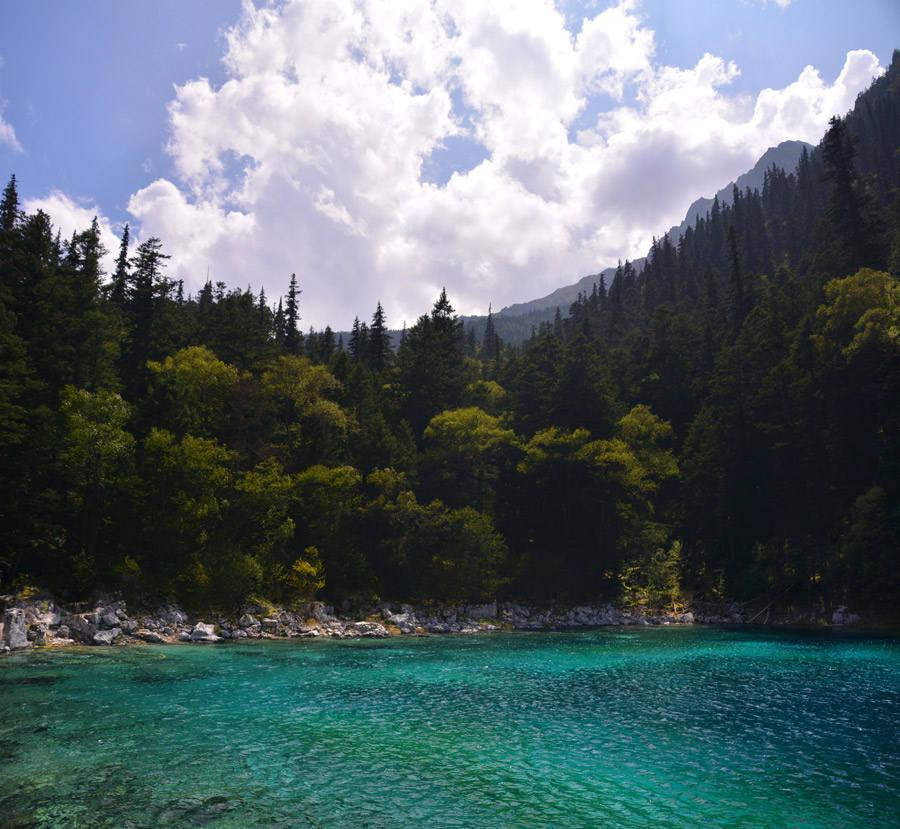 The entrance to the actual park is deceivingly uncrowded (unless you arrive right when it opens).  After paying our half-off entrance fee with our student IDs, we board a bus to head to the tourist center in middle of the park, about 15 km away.  We are the only two people on this bus, and for this 15 minute ride, we think maybe we will be lucky and have a very uncrowded atmosphere here…

Then we see the tourist center.  It reminds me of approaching a theme park, as there are hundreds of people swarming around outside, most are either in line for a bus or putting the finishing touches on their meticulously packed backpacks.  The tourist center has everything a Chinese tourist could need.  Narrow hallways to crowd in, hundreds of shopping stalls selling junk, even a food court.  The two buses that leave here go to the two most popular destinations within the park: The Virgin Forest or the Five Color Pool.  We only have time for one, so we decide to head up to the Five Color Pool.  The idea being to take the bus up to the top and walk back, as it’s over 10 km to the top.

Getting on this bus is one of the few times on this trip I (just for a moment) wish I was in an office working instead of out traveling.  The line for the bus has about 250 Chinese tourists, but I don’t know if I can actually call it a line.  It’s more of a mob.  What’s worse is that each time a bus comes, not only do the people in the front of the ‘line’ start pushing and shoving to get on, but another ten or so people always run from the back of the line to try and sneak on, skipping the entire line.

Here is a quick video I took of the scene at the bus stop in the park:

During our bus ride to the top, I also witness a scene of absolute horror.  There is just a constant stream of tourists walking down the path back to the tourist center.  Thousands of them, walking in a clumped up cluster of DSLR cameras, cellphone cameras, and of course the dreaded iPad photographers.  They constantly bump into each other as they randomly stop to take pictures of a tree, lake, and of course the sky.  We know that we will soon be joining the line of death, and now every second more on this bus represents a minute of upcoming hell walking.  What have we gotten ourselves into… 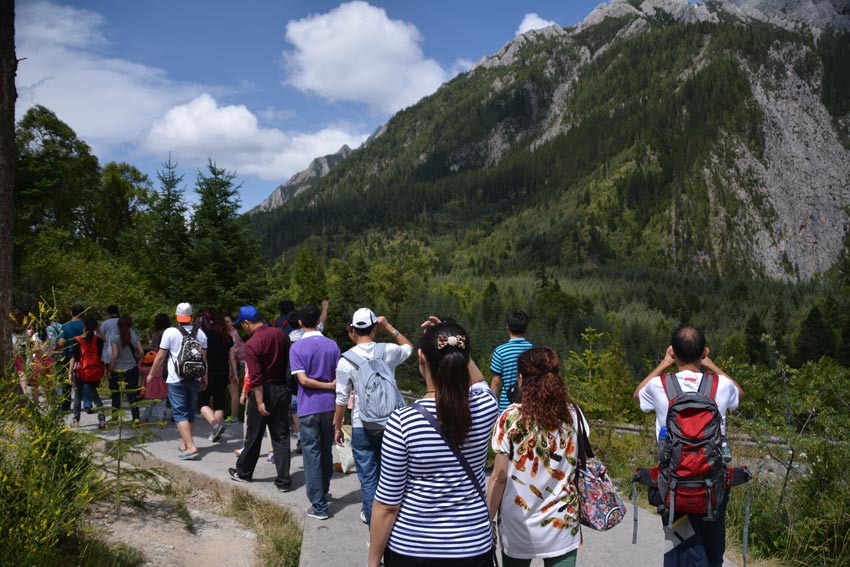 After arriving at the top bus station, we get about 15 minutes to enjoy the view of one of the park’s largest lake, Long Lake, before inevitably joining the march back down the mountain towards the tourist center.  After 15 minutes of rubbing elbows with ipads and umbrellas, we arrive at the Five Color Pool.  It is obvious why this is the park’s most popular attraction, and even though there is barely room to move in the crowd we are still able to enjoy this beautiful site.  In fact, the whole crowd seems to forget their selfish impatience for just a few minutes to enjoy the view. 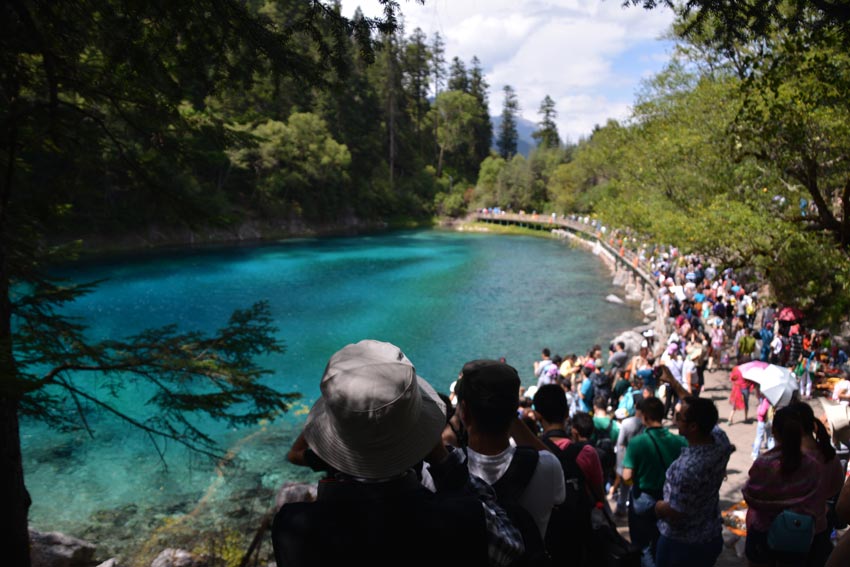 After spending a few minutes admiring the naturally colored pool, we get back into the marching line and head back downhill.  We are told there is very little to see on the top of the mountain, so we get back onto the bus and head to the tourist center.  We decide that walking the path from the tourist center to the park entrance will probably be less crowded, and just as beautiful as the Five Color Pool was. As we arrive back at the tourist center, we see signs that direct us to the main walking path going to the front of the park.  There are amazingly constructed walking paths throughout this entire park.  An amazing achievement, and something that makes it such a great place to visit and see.  The first site we come to after walking away from the tourist center is Nuorilang Falls, a large circular waterfall. 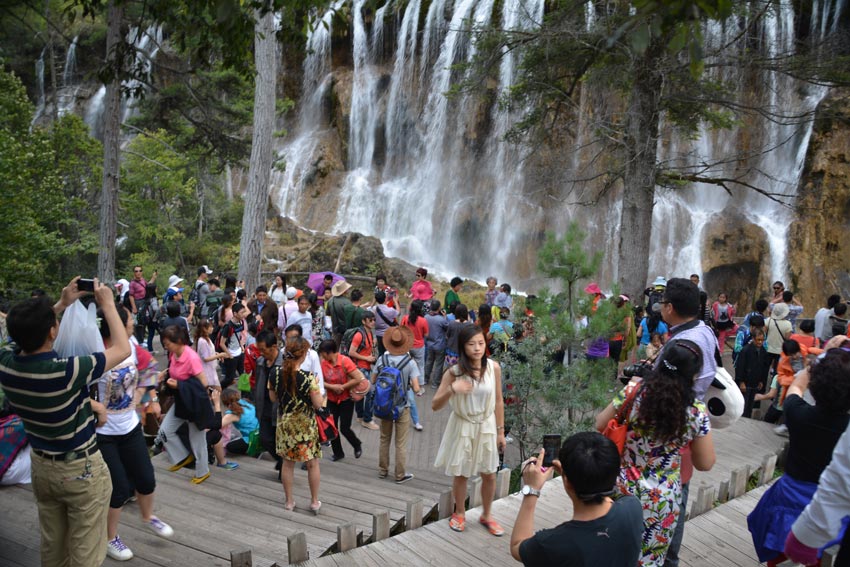 The viewing area around the falls is just as crowded as the Five Color Pool, however we notice that everyone seems to be leaving the same direction they came, meaning very few people are choosing to continue down the path into the park.  99% of the Chinese tourists that come to this park refuse to walk more than a couple of minutes, and take the buses to the two or three places they want to see.  This is great news for us, as minutes after being in a swarm of Chinese tourists, we find ourselves completely alone on a path in one of the world’s most beautiful protected parks. 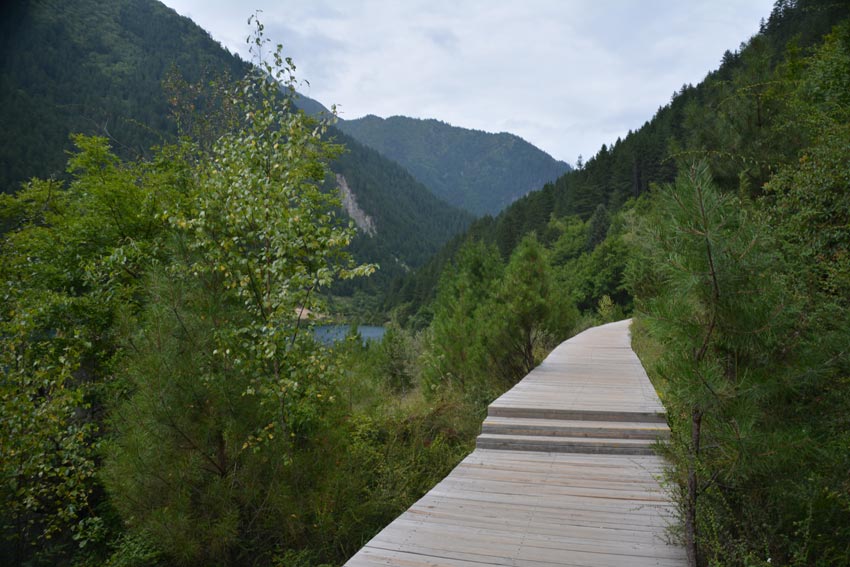 We are so relieved to have made the decision to walk the ten miles from the tourist center to the park entrance.  Even though the first two sites were amazing to see, we were so deflated from the constant pushing and shoving that came with them.  To all of a sudden find ourselves alone with this park is just what we needed.  In fact, it’s the first time that we’ve been in China and found ourselves alone without another human in site (not including being in hotel rooms).  The solitude, quiet, and fresh air are so welcome to us, and as a guy who’s never been a big outdoorsman, I’ve never appreciated nature as much as I do right now.

We pass another tourist or two every 10 minutes, especially at areas along the path that have bus stops, but for the most part Alissa and I enjoy a peaceful four-hour hike on our own.  All on PERFECTLY constructed walking paths.  At each turn, I am more impressed by this path.  It streches for miles, yet it is perfectly clean and flat, weaving its way around trees without damaging or effecting any plant life.   Of everything we’ve seen in China so far, this is my favorite engineering feat, even better than the World’s Largest Building that we visited last week. 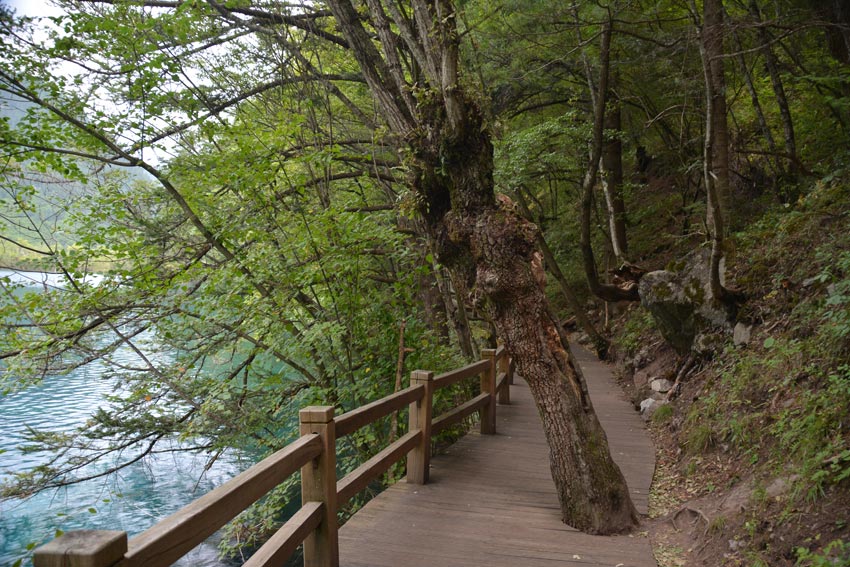 What is so amazing to me is that although the colored pool at the top of the mountain is stunning, the hundreds of other small lakes and rivers in this park are just as colorful and beautiful.  I don’t understand why the one pool at the very top of the park is so popular and crowded when it is so much easier and peaceful to enjoy the lower areas of the park.

The lakes especially are amazingly colorful, clear, and reflective.  It is against the rules to swim here, and it is extremely difficult to avoid the temptation. of jumping in.  The shallow parts of the lakes are especially cool, as you can see numerous dead trees and other plant life under the water.  When looking into the lake, it’s hard to tell which trees are under the water and which trees are reflections from above: 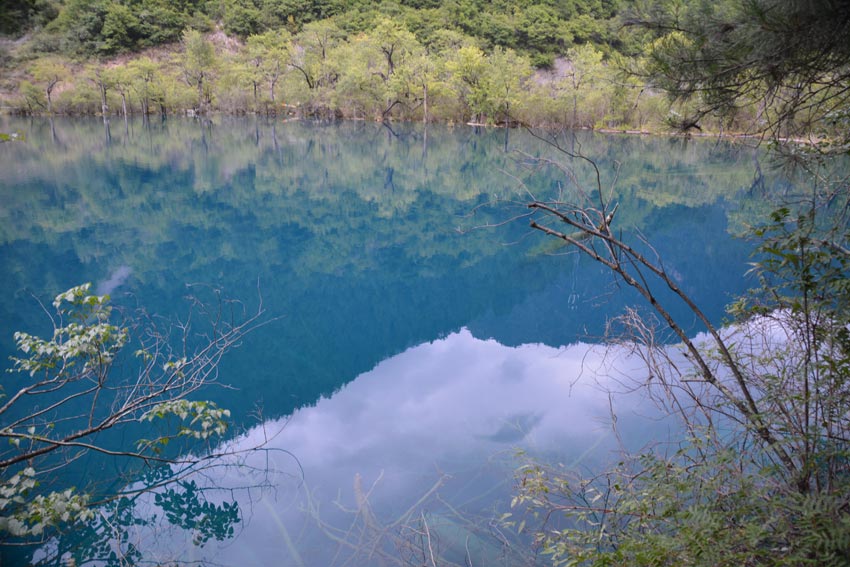 If the lakes weren’t enough eye candy for the day, when we get closer to the bottom we begin seeing waterfalls and white-water rivers weaving their way through the colorful maze of trees.  Every hundred feet there is another photogenic scene of rushing water and mini water falls.  The walk back ends up taking us a lot longer than planned due to our constant stopping to admire something interesting.  I can’t believe that these thousands of local tourists prefer to crowd onto a bus, crowd around one or two sites, then crowd back onto a bus to a crowded tourist center to eat, then leave, without ever walking through the acres upon acres of uncrowded parts the park offers.  It is one of the biggest contrasts of atmospheres within one tourist area that we’ve ever seen.  If we had an extra day here in the Jiuzhaigou Valley, we would definitely come back to the park and do another four-five hour hike.  For someone as “indoorsy” as me to say that, it really speaks volumes of how great this park really is. 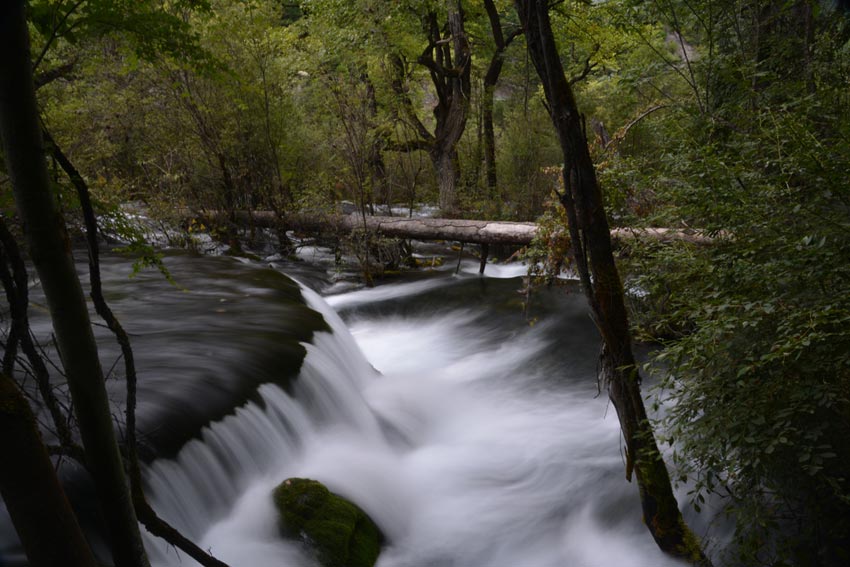 2 Responses to Jiuzhaigou: Pushing and Shoving through China’s Natural Disneyland