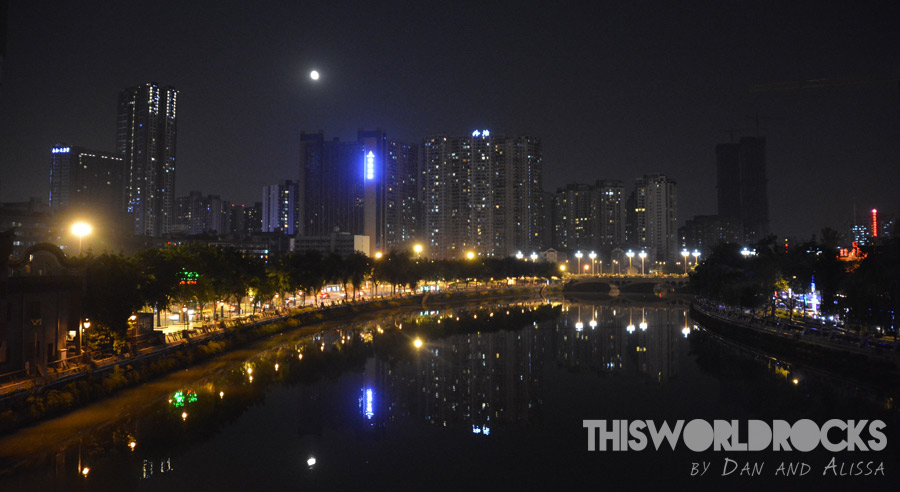 It’s been a week of battling the crowds and language barrier that come from traveling in China, and we’ve already had a number of fun and interesting moments.  We took the train across the border from Hong Kong to Shenzhen, China and then flew up to Chengdu to start our time in China in a big, booming Chinese metropolis.

– The FIRST person I saw at the Shenzhen airport was a Chinese woman in her 20’s with a tattoo in English characters.  It said “I WANT TO HOLD YOUR HAND.”  I always wondered if Chinese people got tattoos in English like people in the U.S. get tattoos in Chinese characters.  I guess the answer is yes!  She was full-blooded Chinese BTW, and didn’t speak English.  I tried snapping a picture, but her boyfriend was bigger than me.

– It didn’t take long to have some interesting food experiences.  We’ve avoided all the crazy stuff that we’ve seen on menus.  Bullfrog, cold intestines, pig throat, duck tongue, and much more.  Today for lunch, Alissa ordered a “Veggie Burger”.  It consisted of a huge bun, lettuce, tomato, cucumber, and a big seasoned egg omelet patty.  About 80% of the way through her meal, I saw Alissa drop the entire sandwich back on the plate.  She held up the egg patty, and there was a nice little friend backed inside for her to find.  A housefly to be exact.  The fly looked at peace, and hopefully it died of old age before being burned alive in the egg.  If you’re wondering, I had the Yak Fried Rice, and there were no flies in mine.  At least none that I saw.

Lady: “Excuse me, what is this fly doing in my soup?”
Waiter: “Looks like the backstroke ma’am” 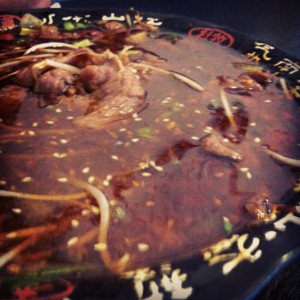 – We tried some hot pot in Chengdu, featuring their famous Sichuan Pepper.  The pepper is known as the “Flower Pepper”, and these things pack heat.  It’s a different heat than any other spicy food I’ve had, especially in the United States.  The heat is actually more of a tingling, and even numbs your tongue.  I enjoyed it more than Alissa did, but we definitely both liked it.  The ingredients in the hot pot are very fresh, and the beef we had was excellent too.  This was our first official meal in China that we really liked.  After our meal, and I’m glad it was after, our chef came out to say hello.  Little did we know he was cooking Matthew McConaughey style.  At least he was wearing an apron: 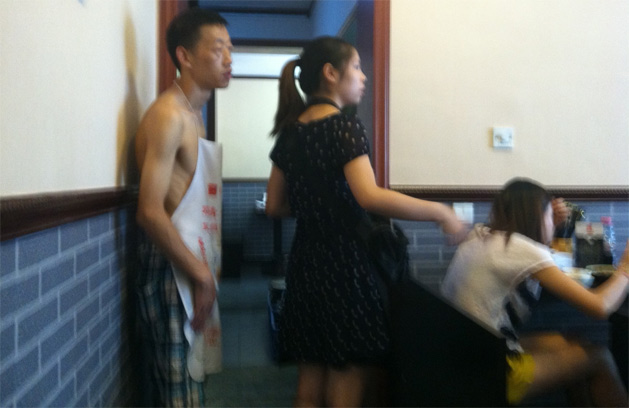 – The number of residential high-rise buildings in Chengdu is something so incredible and amazing to me.  They are everywhere.  Row after row of them.  They are grouped into complexes that feature 10-15 identical looking 20+ story buildings.  How do they not get lost every day?  What’s crazier than the sheer number of these complexes is that fact that there are just as many new ones under construction.  We were in one part of town that was being built from scratch, with at least 30 brand new high-rise residential and commercial buildings all under construction at the same time. 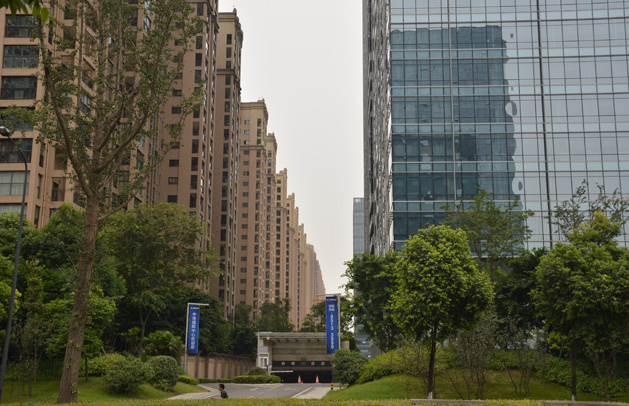 – The metro system in Chengdu was the first time I’ve ever road a subway system that was still so new.  It opened in 2010, but it still looks and smells new.  They are just getting started too, as there is massive construction happening all over the city to expand this metro system as fast as possible.  By 2015 it will have tripled in size.

– Just like washed-up baseball players head to Asia at the end of their careers, so do cereal mascots.  Trix Rabbit just couldn’t command the same salary he did in the 1990’s at the peak of his career.  He realized he could make more money heading overseas to sell products.  Here he is selling a bowl of mystery meats and ingredients. “Silly rabbit, pork throat soup is for kids!” 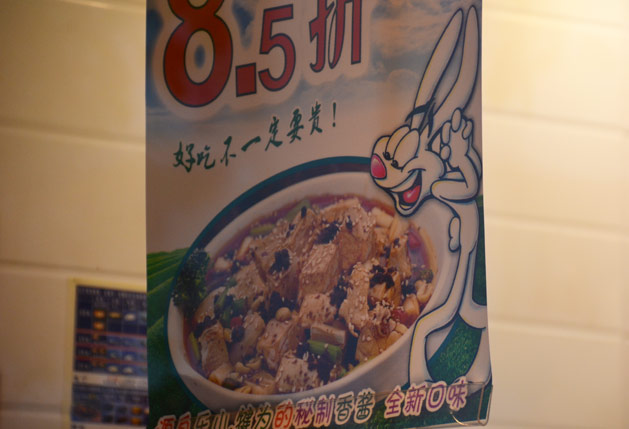 – Remember when you would be sitting in church, and you’d ask your mom if you could go to the bathroom, and when she’d say no you would always answer back “But it’s an emergency!”  Well I finally found the toilet you can use in that situation.  I didn’t ask, but I assumed there was an attendant at the entrance to the bathroom door who screens every patron to ensure that it is indeed an emergency need for a bathroom.

– We haven’t seen too many weird people, but this lady sat next to me on one of our bus rides.  She had red hair, and there was about a half of an inch of white makeup caked onto her face: 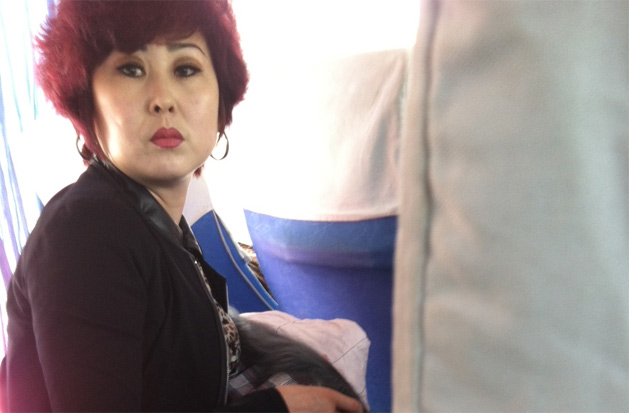 – I’m sure this carnival ride from a park in Chengdu is safe: 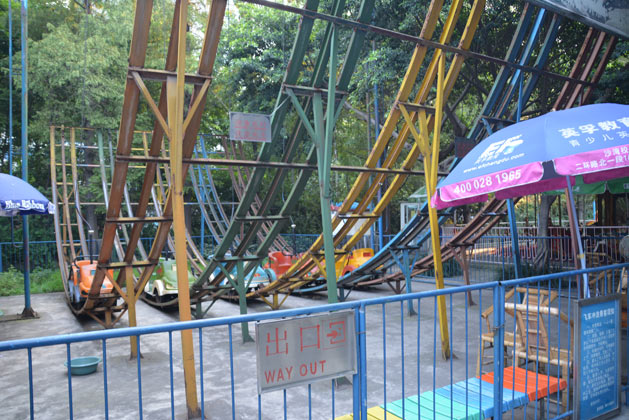 – Also in our first week here, we visited both the Pandas of Chengdu, the beautiful Jiuzhaigou Nature Reserve, as well as the World’s Largest Building.  More on that later!

– I’ll leave you with one of the coolest things I’ve seen so far here.  I’ve heard of cellphones disguised as trees before, even in the U.S., but this was the first one I’ve seen in person: 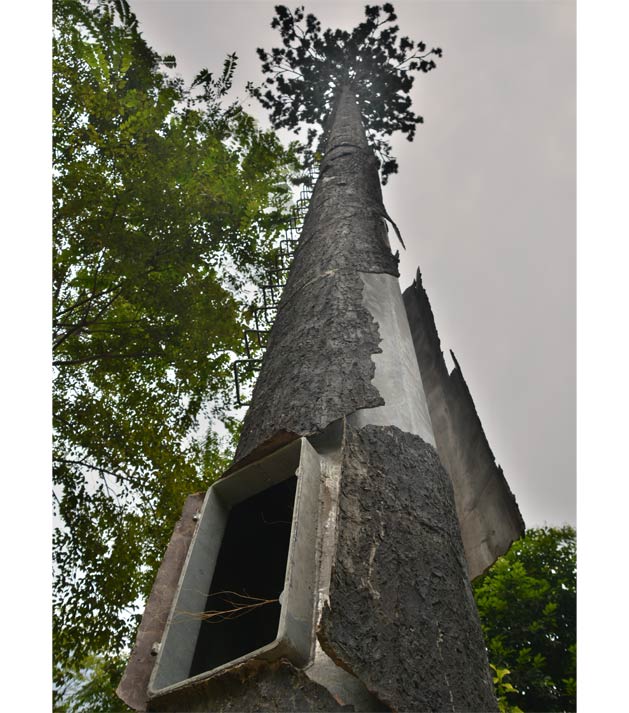 Our trip to China is sponsored by eDreams.