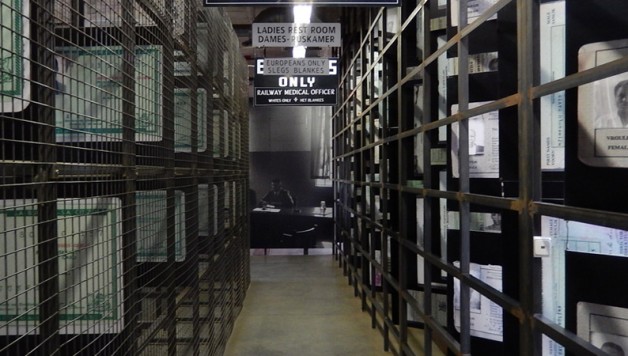 All Who Pass: Remembering Apartheid and District Six

It’s nearly impossible to travel around South Africa and not be reminded of the racial divide that separated this country for nearly 50 years.  Even today, driving around the suburbs of Johannesburg, I haven’t seen one house that is not surrounded by a tall brick wall and barbwire/electric fences.  On Alissa’s walking tour yesterday, the guide showed them a bench that has been preserved near the city center that says “NON-WHITES ONLY”.  A closer inspection of the bench even shows a full description of what makes someone “white”: 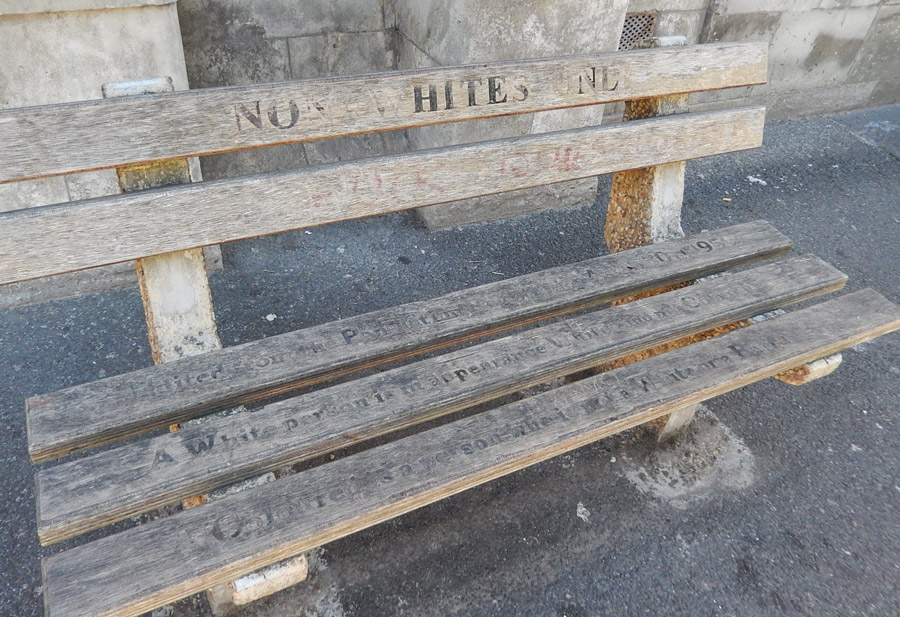 Just talking with locals about the history of their country is hard to do without mentioning race in some way.  This, of course, is all because from 1948 to 1994, South Africa’s government implemented an apartheid system that officially divided and segregated the country based on each citizen’s race or assigned race.

Before arriving in Cape Town, I’ll admit I wasn’t as familiar with this country’s history as I should have been.  Just like schools from outside the U.S. probably generalize and simplify the history of the American civil rights movement, I also only learned the very basics about apartheid and never really got a full course on the subject.  We learned quickly upon our arrival here that the history of apartheid is a subject you can spend a lifetime learning about and still never cover it all.

To get a better understanding of what went on in this country, Alissa and I have planned a visit to the former District Six in Cape Town and an afternoon at Johannesburg’s Apartheid Museum. 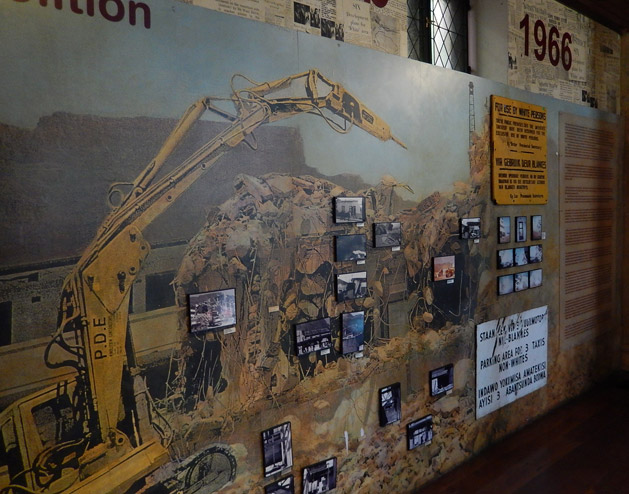 In 1966, South Africa passed the Group Areas Act, one of over 50 acts and laws passed during the apartheid years meant to keep races separate.  This act basically allowed the government to remove groups of people from their homes and neighborhoods based on the color of their skin.  It was a law meant to move “non-whites” out of the more appealing city center while allowing whites to move closer to where they work.  It was one of the most racist laws ever passed, and it effected thousands of citizens within South Africa.  In Cape Town, one large neighborhood was hit particularly hard by this law from the moment it was passed.  The area is known as District Six, and it was completely destroyed between the years of 1968 and 1982.  The only buildings that were spared were churches, and today, one of those surviving churches has been turned into a museum: 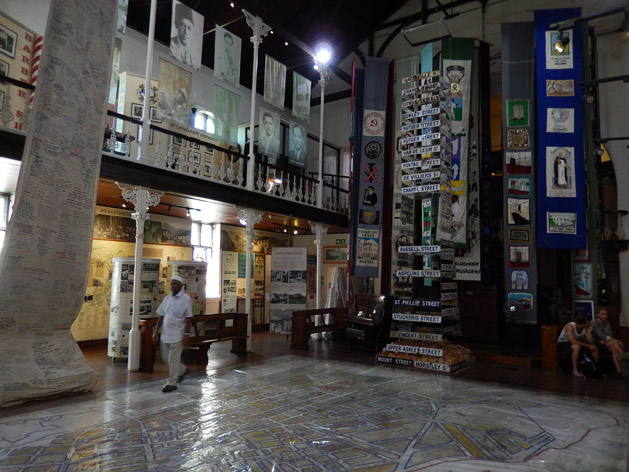 Inside the District Six Museum in Cape Town 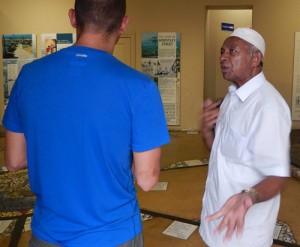 By the time the last people residents of District Six left in the early eighties, over 66,000 people were forced to leave their homes so the government could demolish them.  66,000 people may not sound like a lot by today’s city population standards, but in 1966 that was about 10% of the entire Cape Town population.  If a similar relocation was attempted using today’s Cape Town population numbers, it would mean the removal of over 350,000 people from their homes.

Our guide in the museum was actually a resident of District Six back in the 60’s and 70’s and was forced out of his home.  He is a Cape Malay, which in South Africa got him generalized into the “colored” category.  Our trip the museum is excellent as he not only tells the story with first-hand knowledge, but with a passion that brings the story to life.  Being an old church, the museum is actually quite small, but hearing the story like this somehow makes it feel much bigger.

After our museum tour Alissa and I take a walk out to the heart of the former residential part of District Six.  One of the amazing things about this story is that even though the government evicted all these people and demolished their homes, they never actually moved any whites into the area or rebuilt any buildings (other than one university).  I took a photograph of a lively District Six street from the museum and we walked around the ruins and old streets until we found exactly where that photograph was taken.  Check out the before and after: 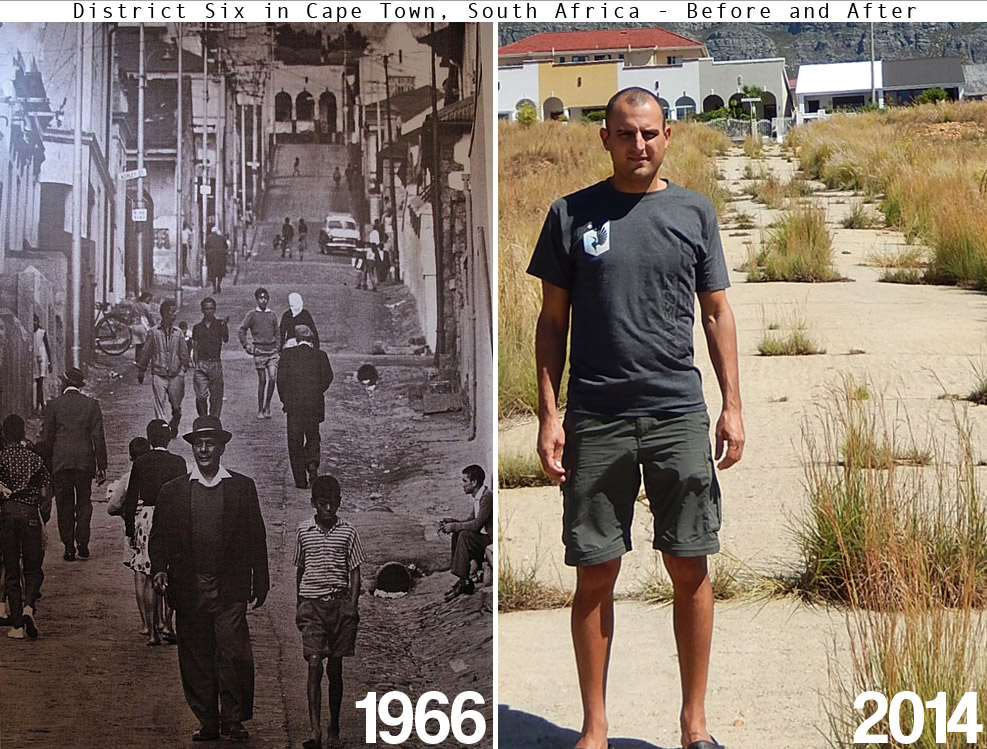 There are rough plans in place to turn this area into a memorial, and each year former citizens are slowly being allowed to move back, although neither project seems to be moving very quickly or efficiently.  Our guide was one of the lucky few who have been able to successfully move back into the area.  As we walk back to our hostel, we take one last look at the plaque on a church in District Six that reads:

ALL WHO PASS
Remember the thousands of people who lived for generations in District Six and were forced by law to leave their homes because of the colour of their skins.

Fast forward to this week, and after an overnight bus ride from Cape Town, we have found ourselves in South Africa’s largest city, Johannesburg.  We have heard some amazing things about the Apartheid Museum here and have set aside the entire afternoon to exploring it.  The museum is extremely large, and besides the main permanent exhibit, there is also a temporary Nelson Mandela exhibit going on.  Instead of trying to recap 50 years of history in a travel blog article, I am just going to highlight what parts of the museum I found the most interesting and moving. 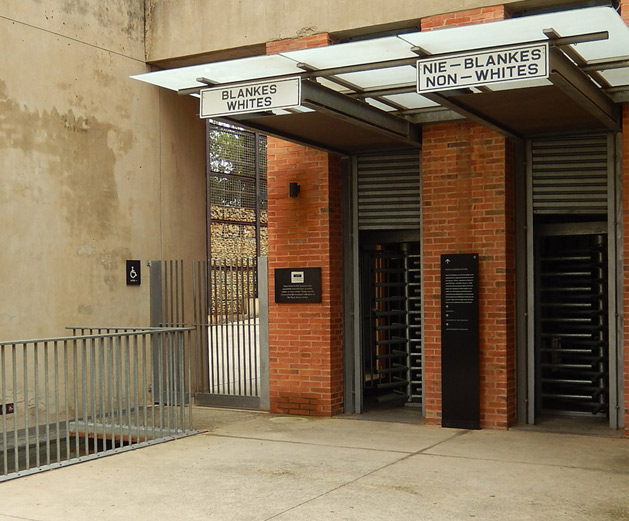 The main entrance to the Apartheid Museum. 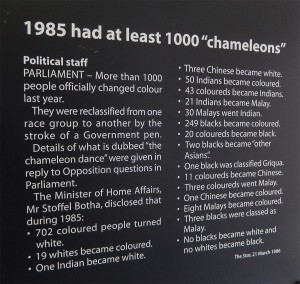 The museum wastes no time in trying to throw you back in time into 1960’s South Africa.  Each ticket is randomly assigned to be either White or Non-White, and we have to enter our assigned door based on our ticket.  Once inside, the walls are covered in blown up photos of actual citizens I.D. cards.  These were the I.D.’s that the government forced people to carry around that had them classified as White, Colored, or Black.  An interesting thing that catches my attention is the fact that people could actually change races each year.  The sign on the right is an excerpt from a South African Newspaper and explains how 1,000 people changed races in 1985 alone. 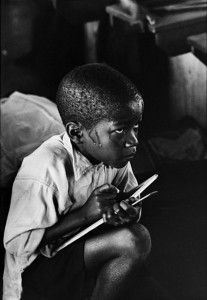 My favorite part of the museum was an area dedicated to the late photographer Ernest Cole.  He was a black South African who spent a couple of years taking pictures of what it was like to be black in South Africa in the 1960’s.  He published the photos in a book called House of Bondage, but it was banned in apartheid South Africa.  This exhibit is the first time the photos have ever been displayed in public in South Africa.

Each of Cole’s photos draws out a different emotion.  Some of them are heart-breaking, some are up-lifting.  Some show children playing while others show pure hatred and evil.  Many of the photos seem to be able to tell an entire story with just one frame.

My favorite photo is the one shown on the left of a young boy struggling with intense heat in an over-crowded classroom for black children.  You can see a lot more of Cole’s work by simply searching his name with Google Images.  (click here to see some)

To me, the most inspiring part of the museum is near the end of the exhibit when videos are shown of the mass protests of the late 1980’s/early 90’s.  I had never seen any video from protests during apartheid, so I was completely unfamiliar with how it looked.  1988-1991 is the time period when the protests really picked up steam and the sheer number of protesters in the videos is amazing.  However, the number of protesters isn’t what makes it unique, it’s how they protested.  They use a method of protesting called toyi-toyi.  It basically looks like a person is jogging in place, but really they are moving forward slowly.  It doesn’t look like much when one person does it, but when you see a video of hundreds of thousands of people peacefully doing it at the same time, it sends chills down your spine.  I stayed in this part of the museum for nearly an hour and watched every single video they had on the many monitors.

There were no cameras allowed in the museum, and I tried desperately to find the videos of these protests online.  Unfortunately, I wasn’t able to find the exact video clips from the museum.  However, I was able to find some similar clips from the same time period in South Africa, one of which I believe is actually from a movie.  I put them together in a quick 30-second clip below.

I rank the Apartheid Museum in Johannesburg as one of the best museums I’ve ever been to.  I highly recommend a visit here if you plan on spending any time at all in Johannesburg.  Tomorrow, Alissa and I hop aboard another budget airline, this time it’s Pegasus Airlines, and head to Israel to meet my parents for a 10-day tour of the Holy Land.

One Response to All Who Pass: Remembering Apartheid and District Six