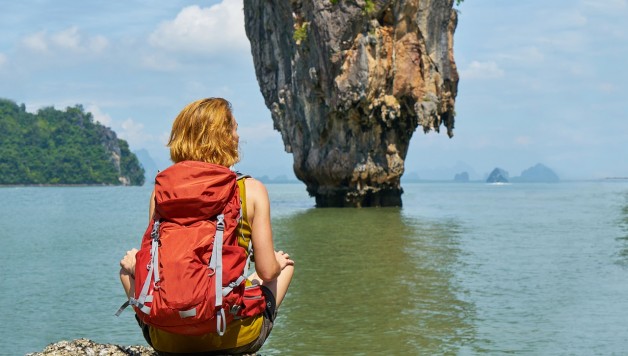 How to Stay Safe Backpacking in Asia

When traveling, your safety is of utmost concern. You deserve to unwind and have a great time with a country’s beautiful sceneries without being harmed.

And safety isn’t all about thieves who want to pick your pocket. Natural calamities, terrorism, and even the smallest of health issues count too!

Most Asian countries are generally safe for traveling. With the exception of chaos-plagued countries like Syria, Iraq, Pakistan, and Afghanistan, tourists typically go back to their mother lands with little to zero issues.

Never let your guard down though. Below are some tips to have a safer and sounder trip in Asia.

In an unfamiliar territory, you shouldn’t wear expensive rings and necklace in a flashy way. You should also bear the littlest amount of cash, and your wallet shouldn’t be hanging low.

Now if a local pursues your bag, you might be better off letting it go than taking the risk of being hurt.

When taking out money from an ATM, be on the lookout for possible suspicious people in your surroundings. Also, never leave your belongings on the table top of a restaurant while you order.

As mundane as these tips may be, it can spare you from unwarranted hassles while traveling.

If you are a female tourist, you are likely to draw attention from Asian men.

There is nothing wrong with little heaps of praise, but it’s better to be safe from any form of malicious intent.

Needless to say, always watch how your drink is prepared and never accept any from strangers. Also keep conversations with male locals as short and formal as possible to avoid misinterpretations.

In terms of clothing, wear something that is not too revealing as conservative religions like Muslim and Buddhism are prevalent in Asia.

These tips may appear prejudicing for women travelers, but safety should always be top priority.

Reputable weather stations typically warn travelers if there’s an impending large storm that’s about to hit their destination, including in Asia.

Such calamity can result to storm surges and landslides, so you may want to think twice if you should go on with your trip.

Generally speaking, it is much safer to stick to the popular tourist spots in the Philippines. That way, you will have plenty of options if your itinerary must change, and it allows you to stay much more flexible.

Now if you are already in Asia when the storm hits, always pay attention to the news. Place valuable documents and garments in waterproof plastic sheets to protect them.

When the storm is as its prime, it’s best to stay indoors. If evacuation is needed, follow procedures from the local government in being relocated to an evacuation center.

Having infections while on the road can be pesky. It reduces your mobility and overall enjoyment. Therefore, the littlest of cuts and scratches on your feet or legs (especially if it’s caused by sea corals or debris), should not be taken lightly.

As good as Asian food are, for instance in Bohol island hopping and other packaged tours, your tummy may have a hard time adjusting to some of it.

Avoid overeating food like seashells and ones with heavy and exotic sauces. Pack diarrhea tablets before flying as well to avoid getting stuck in public toilets.

All humans have a sense of danger. When traveling, see to it that your instincts are always sharp. Whether in Asia or any parts of the globe, it pays to respect the people and their culture.