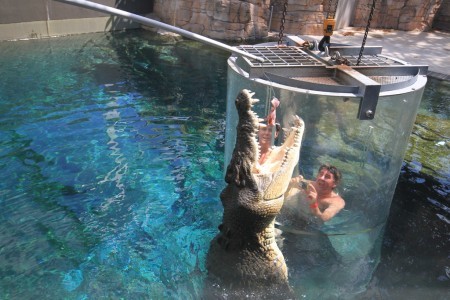 When you think about a holiday in Australia, you might think of touring the capital cities like Sydney, Melbourne, Brisbane, or even Canberra or Perth, but the capital city of the Northern Territory, Darwin may not pop right into your mind. That’s too bad, because it is a great adventure where you can combine a coastal city with beaches along with the Kimberley to the west and the Outback too. In this article, we will explore things to do in Darwin and surrounds. When you plan a holiday in Darwin, you should also plan to hire a vehicle so that you can get around on your on schedule and go where you want to go when you want to go there. If you rent a four wheel drive at Budget Darwin, our friendly staff can help ensure you have the right vehicle for the rugged and remote terrain of the Northern Territory.

Darwin is located in the region of Australia known as the Top End, this is the top section of the Northern Territory that is remote, tropical, and experiences very distinct wet and dry seasons. During Australia’s winters, Darwin, the Top End, and the entire northern part of the continent remain warm and tropical. This is also the dry season, which is the best time to visit. The winter temperatures are humid and range between 19 °C and 24 °C. Darwin is not as big as the other capital cities in Australia, but it is the only real “city” in the Top End, it is surrounded by National Parks, Outback, Aboriginal lands, and to the west is the Kimberley region of Western Australia.

While in Darwin there is plenty to do including visiting the beaches, water sports, shopping, and outdoor markets. The Mindil Beach Markets are a popular activity for tourists and locals alike. Mindil Beach is near Darwin’s CBD. Darwin is situated on the Timor Sea, known for coral reefs and some beautiful dive spots off the coast. If you like to stay close to the beach, fishing, beach sports, and just relaxing on the beach are all popular activities. You can also take a cruise around Darwin Harbour, visit the Darwin Military Museum, or go shopping around town. Many tours leave directly from Darwin including Mary River Wetlands crocodile spotting cruises, aerial tours of Kakadu, and Aboriginal guided tours.

Then there are unique experiences that help you explore the local wildlife of Darwin. Of course, that includes the infamous crocodiles. They can be seen on wildlife cruises, in the national parks, and also at attractions like the Territory Wildlife Park which includes jumping crocodile cruises in addition to other local sightseeing. Darwin is one of the only places in the world where you can (safely) swim with giant crocodiles at Crocosaurus Cove (pictured above).