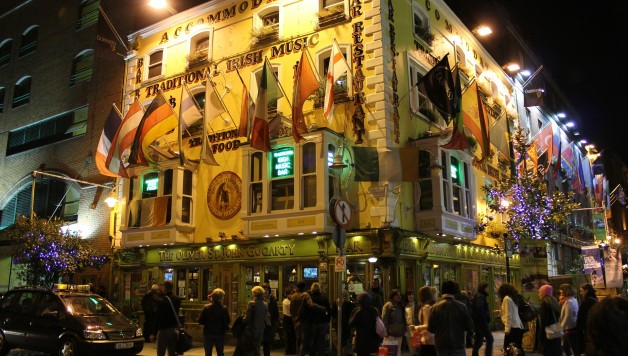 What to Visit on Your First Trip to Dublin

Published On September 17, 2019 | By Staff Writer | Travel Planning
Share this:

What are the places to visit in Dublin if you’re visiting the city for the first time? There are lots of places to see but most important advice we’d want to give you is to enjoy the city above all for its relaxing atmosphere and for the many gastronomic opportunities it offers.

Stroll around the following places, and you’ll get a great mix of classic sights and hidden gems.

How to get from Dublin airport to city center

We looked at the different ways you can get from Dublin airport to the city centre, but first here are some basic facts about Dublin airport:

We recommend catching a taxi to and from Dublin Airport. Taxis hold several advantages over public transport such as door to door service, faster movement in traffic and the wait is much shorter compared to a bus line.

Taxis are available in the forecourts directly outside both Terminal 1 and Terminal 2.

Trinity College is probably the best spot to kick off your Dublin tour. It’s at the heart of the capital, packed full of incredible history, and it’s the oldest university in Ireland having been founded in 1592 by Queen Elizabeth I. Trinity retains some of its ancient seclusion of cobbled squares, gardens, and parks and is famed throughout the world for its collection of great treasures. These include, on permanent exhibition, the 9th century illuminated manuscript, the Book of Kells, the Books of Durrow and Armagh, and an ancient Irish harp. The priceless artefacts are displayed in the Treasury and the awe-inspiring 18th-century Long Room, which houses more than 200,000 of Trinity’s oldest books and hosts regular literary exhibitions.

Located in the heart of St. James’ Gate Brewery, the Guinness Storehouse is one of the most popular tourist attractions in all of Ireland. In fact, the interior is designed to look exactly like a pint of Guinness itself and is known to be the largest pint in the world. A ticket to the Guinness factory (roughly €18) will take you on a tour through seven floors of Irish brewing history, where you will learn all about the Guinness family, as well as how the beloved stout beer is meticulously crafted to perfection. At the end of the tour, you will be dropped off at the Gravity Bar on the 7th floor, where you can enjoy a refreshing pint of Guinness with a 360-degree view of the Dublin skyline.

Don’t forget to also pay a visit to Temple Bar, which is also among the top 5 leading tourist areas in Dublin. It has earned the fair title of Dublin’s “cultural quarter”, and with its old cobblestones, buskers lining the streets, bars serving Guinness left, right and center, it seems only fitting that a trip to Dublin includes a tour of this area.

And last but not least, Dublin Castle.

Built in 1204, Dublin Castle was the seat of power for British rule for over 700 years. In April 1684, a fire ripped through the castle, destroying much of the structure. A stunning Georgian palace was built in its place. Since 1938, all of Ireland’s presidents have been inaugurated in St Patrick’s Hall, one of the many grand State Apartments. The manicured castle gardens are a highlight, with this guided tour explaining their history. The tour also includes an excursion to Dublin’s oldest pub, The Brazen Head. The castle regularly hosts special exhibitions and events, which it advertises on its website.

And that’s not all…

Since the city is located right on the east coast, day trips and excursions to the mountains or cliff sides are just a bus ride away, where you can witness some of the most vast and beautiful sceneries in all of Ireland.

And finally, some useful tips for first time visitors:

#1 Dress for the weather: Irish weather is notoriously unpredictable. It’s very common to have all 4 seasons in one day. If you’re out and about in the city, don’t forget your raincoat and keep a pair of sunglasses on you just in case.

#2 Try out new food: The Dublin food scene is not to be missed. From Italian to Thai to everything in between, you’re sure to find something new and delicious.

#3 There is more to drink than Guinness: Ireland’s craft brewery scene has exploded in recent years, so make sure you pay a visit to The Spencer Cocktail Bar and enjoy a bottle of HOPE Craft Beer, brewed right here in the city.

Enjoy your stay in Dublin!

Image by Maguiss from Pixabay