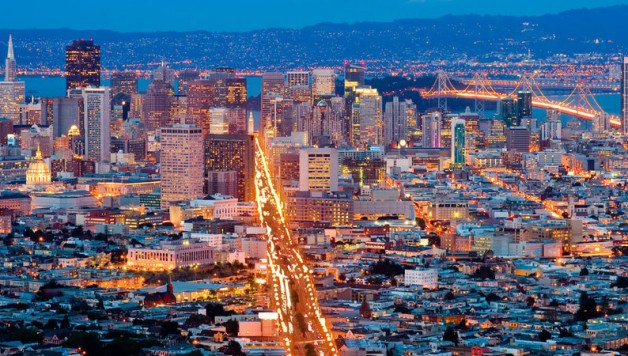 August, with its balmy temperatures and summer vibe, is the perfect time to visit San Francisco. Though you may encounter the city’s famous streaks of fog rolling in from the sea, it’s just as likely that you will experience brilliant blue skies and spectacular sunsets. San Francisco’s weather, like the city itself, is quirky and unique.

San Francisco is, of course, famous for its bridges, especially the Golden Gate Bridge which is an iconic landmark and, according to the American Society of Civil Engineers, one of the Wonders of the Modern World. The other famous bridge is Oakland Bay Bridge, which links San Francisco with Oakland; it is one of the longest bridges in the world and carries almost 300,000 vehicles a day.

The month of August brings with it a plethora of cultural events, with music, dance and other performing arts in abundance. Street festivals, food festivals, outdoor concerts … you name it. San Francisco has them all.

Outside Lands Music and Arts Festival is one of the larger festivals, held in the iconic location of Golden Gate Park. Lined up for visitors is a weekend of top musical performances – 2013 will see the Red Hot Chili Peppers, Yeah Yeah Yeahs, Nice Inch Nails, Paul McCartney and dozens more. There’s also culinary delights with the Taste of the Bay Area and dedicated wine and beer areas brought to you from local wineries and breweries. Not to mention comedy at the Barbary tent, a diverse selection of art installations and street theatre, and Eco Lands with its environmental ethos, featuring urban gardening workshops and the popular solar-powered Panhandle Stage.

Outside Lands is the big one, but there are plenty of smaller festivals throughout the month. The Nihonmachi Street Fair celebrates Asian Pacific heritage with an array of diverse acts, from Hawaiian and reggae music to Chinese and Nepalese dance performances; there’s also information on community groups, traditional arts and crafts and, of course, some fantastic Hawaiian and Asian food offerings.

The Pistahan Parade and Festival highlights Filipino culture with music, folk dancing and martial arts; there’s also a cook-off, raffle and parade. Art and Soul festival features R&B, soul and gospel music, world dance and circus performances; if you want to get hands-on, you can take dance lessons or paint a community mural. Chinatown Music festival, meanwhile, has an eclectic line-up, with everything from jazz piano and classical orchestra to soul, together with storytelling and kids’ activities.

For foodies there are two great events to look forward to. At SF Chefs features top chefs participating in tastings, demonstrations and seminars. Take part in wine tastings and learn the ins and outs of wine production, learn what it’s like to be a food writer, watch demonstrations on everything from frosty cherry margaritas to summer salads and cheer on your favourite chef at cook-offs against the clock.

The other major culinary event is the San Francisco Street Food Festival. A well-loved event, it takes over whole blocks to offer a range of food offerings from dozens of local eateries together with pop-ups and food trucks. There’s also music, dancing and games to keep you entertained.

For film buffs there is the San Francisco Jewish Film Festival, with features and documentaries to encourage an appreciation of Jewish heritage and foster links within the community both locally and internationally. CAAMFest is a celebration of Asian and Asian American film and music. Fancy a bit of Shakespeare in the park instead? No problem. The San Francisco Shakespeare Festival puts on free performances for all to enjoy.

For more artistic events and activities, check local theatres, performing arts studios and community arts centres. With car hire, San Francisco is easy to get around as well as the surrounding areas, so you can experience a trip across the incredible Golden Gate Bridge and Oakland Bay Bridge during your stay.