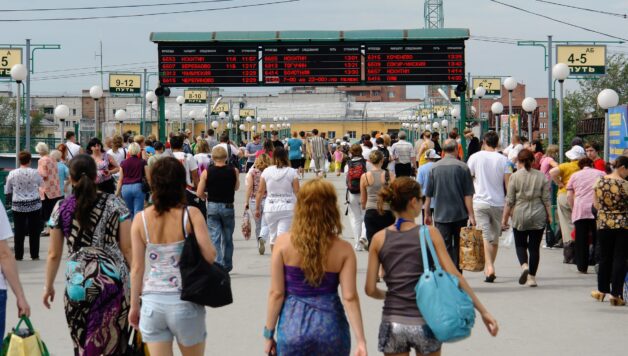 Published On September 29, 2021 | By This World Rocks | Travel Planning
Share this:

Russia’s Trans-Siberian Railway, built in 1891 and completed in 1916, has a total length of 9,288 kilometers. It spans 8 time zones from Moscow to Vladivostok (Vladivostok) on the coast of the Sea of ​​Japan. It can be said to be the most spectacular in the world. One of the railway lines. To describe it in the words of a train fan, it is “the most traveled by rail in the world”.

The construction of the railway is extremely difficult. In addition to dense rivers, lakes and mountains, and a vast area of ​​permafrost, the harsh climate has become the biggest test. Under extremely harsh conditions, thousands of poor Russian peasants and hard laborers participated in the construction. They braved the severe cold and heat, built bridges and laid sleepers. Many people died due to fatigue.

This journey of the Siberian Railway chose to start from St. Petersburg in the west of Russia, and then get on and off the train until the last stop in Vladivostok facing the Sea of ​​Japan. The total length of the railway is 9,938 kilometers, and the land travels through 8 zones of time difference, allowing you to experience crossing the Eurasian continent and feel the multi-faceted customs of Russia. If you are a train fan, the Siberian Railway is definitely an unmissable tour in your life.

A railway journey of nearly 10,000 kilometers, across 7 time zones in Eurasia; the train shuttled through hundreds of cities and towns, from Saint Petersburg, the capital of the Tsar in the west of Russia, all the way to the Far East. Vladivostok in the Sea of ​​Japan. Behind this series of figures is a journey intertwined with diverse humanities and history, diverse landscapes and natural landscapes. Each train not only transports us from one place to another, but also the accumulation of kilometers. Visit Visa Express for Russia visa requirements

The people who come across in the train compartment come from different ethnic groups, regions and backgrounds. There are laborers who have left their hometowns to find a living in Russia from Central Asia, and look forward to reuniting with their families. There are young soldiers who have just joined the army, with a sense of honor and anxiety, and are sent to remote borders to defend their homeland. Some people from the grasslands who are thinking about the vast green space of their hometown unceasingly recommend the mountains and rivers of their homeland, and warmly invite travelers who meet across the river to visit his home. Proud mothers, with children who have practiced their skills, cross the city to participate in the competition.

One after another trains, carrying people from all walks of life, each with their own dreams and expectations, each rushing to their destinations; on the train platform, joys and sorrows are staged day after day. Travelers and strangers have an intersection on this nearly 10,000-kilometer, criss-cross Siberian railway; the long journey and the slow time in the train have created sparks of communication.

Staying in Russian cities and towns, we have seen the grandeur of a big country, the traces and burdens of history, and the current rhythm of life. European metropolises such as St. Petersburg and Moscow have endless majestic historical buildings, from the palaces of the tsars to the underground palaces of the Soviet period; the small towns of the Far East, the wooden houses in disrepair, faintly remain with delicate window carvings; There is the beautiful Lake Baikal, with vast indigo blue and waves like the sea. As the sun changes, the color of the lake shows a variety of appearances. Standing in the lake, on the sparsely populated and picturesque islands, people have not yet emerged from the shadow of the fall of the Soviet Union. The fishing industry is entering the sunset, and abandoned fishing boats and collapsed factories are lined up on the shore of the lake.

This railway journey, from autumn to winter, the cold and warm life on the railway, what you see and hear along the way, it takes more time to settle and ferment.

Image by InstagramFOTOGRAFIN from Pixabay