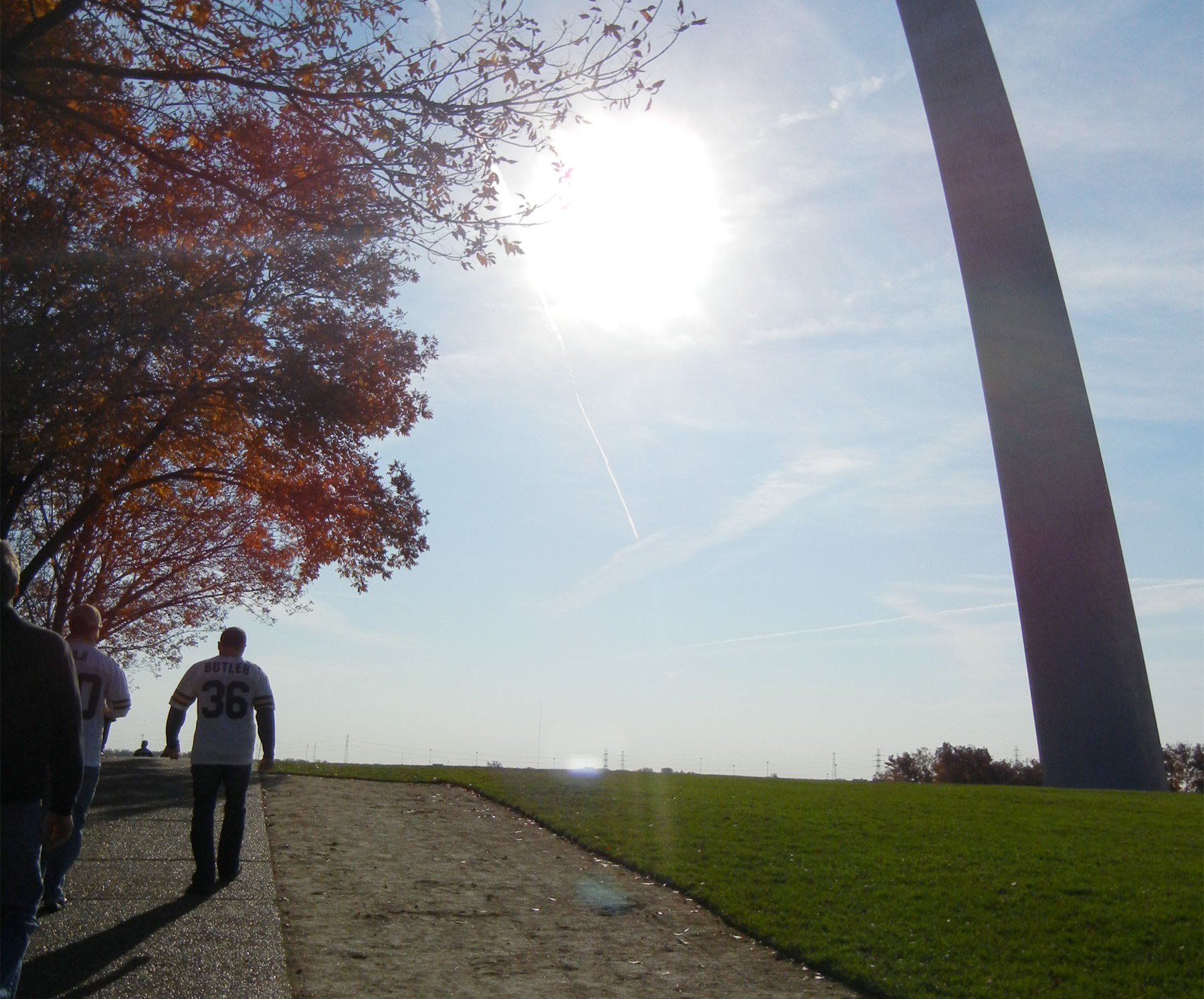 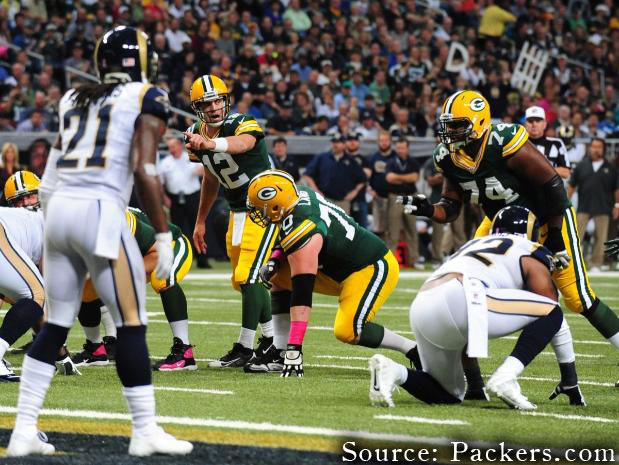 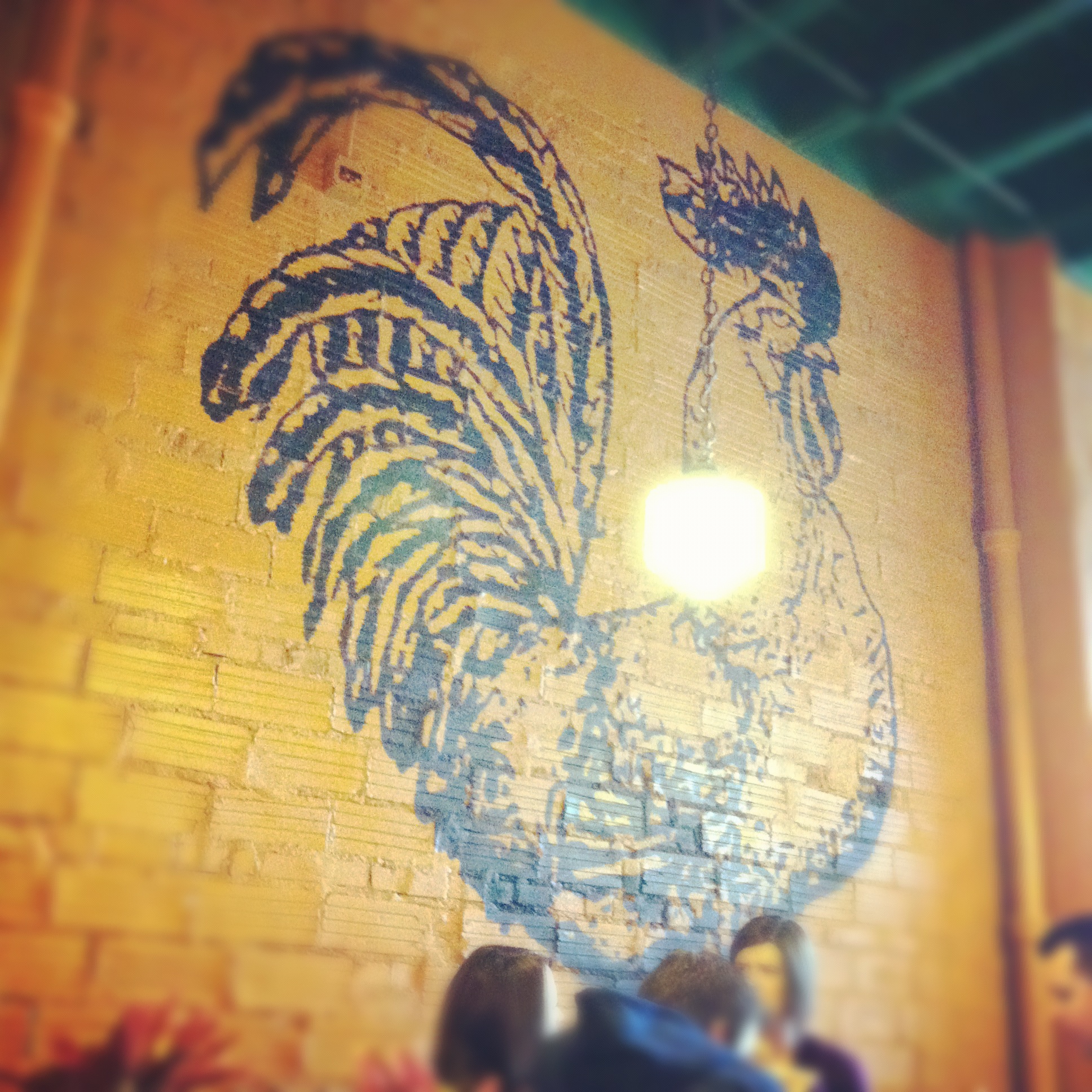 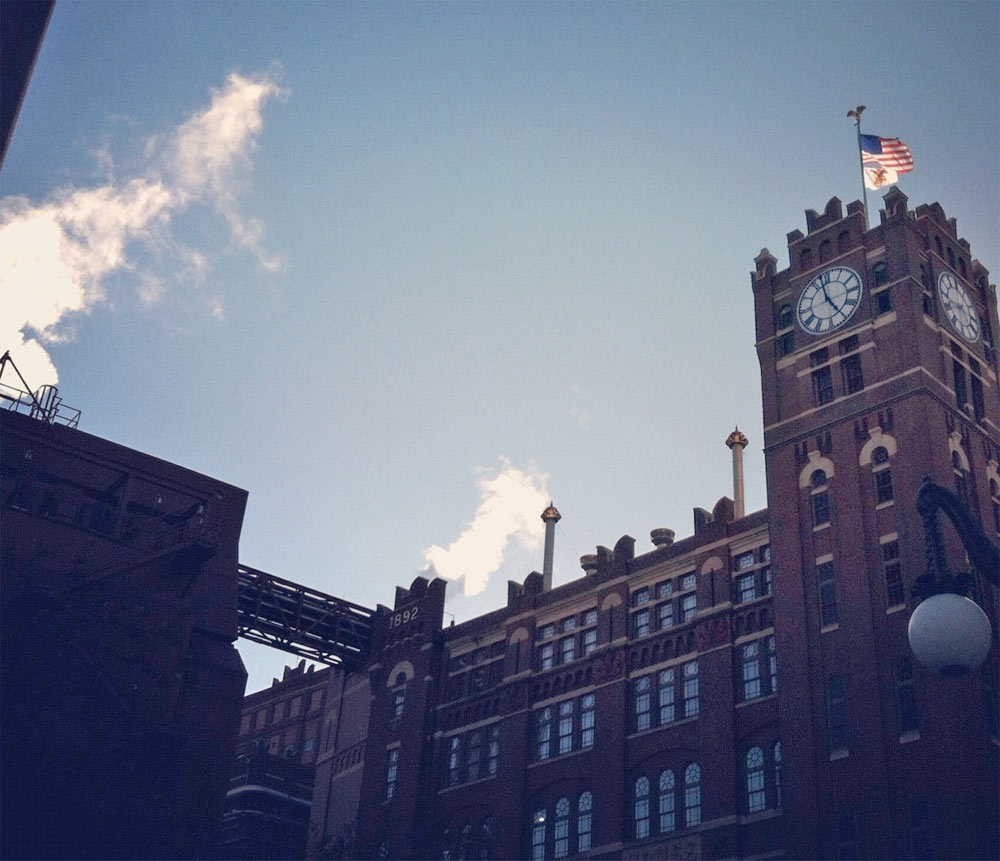 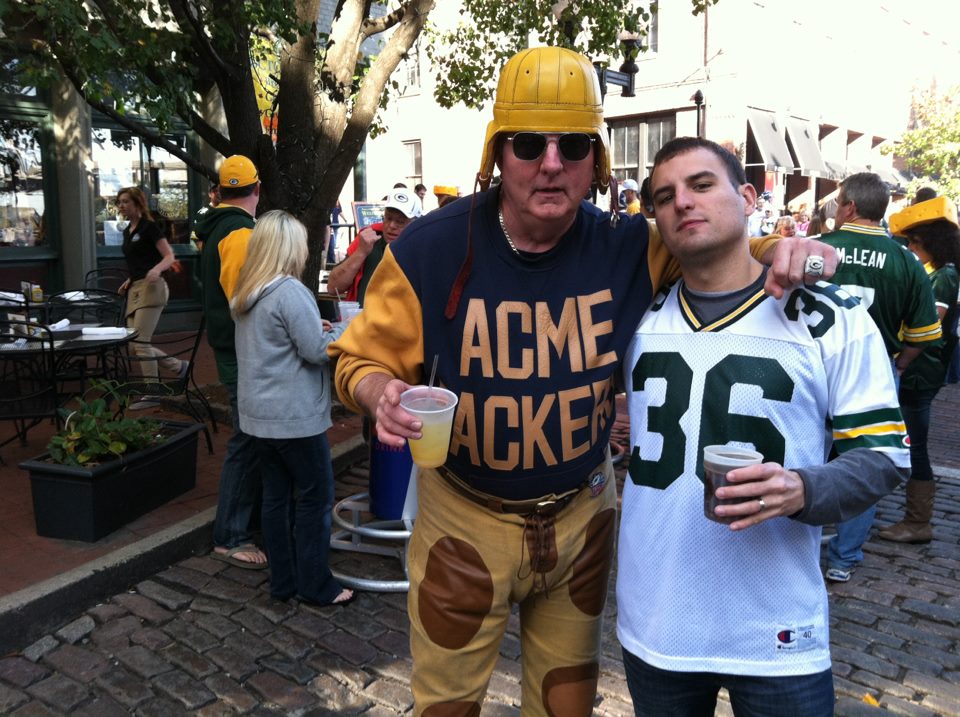 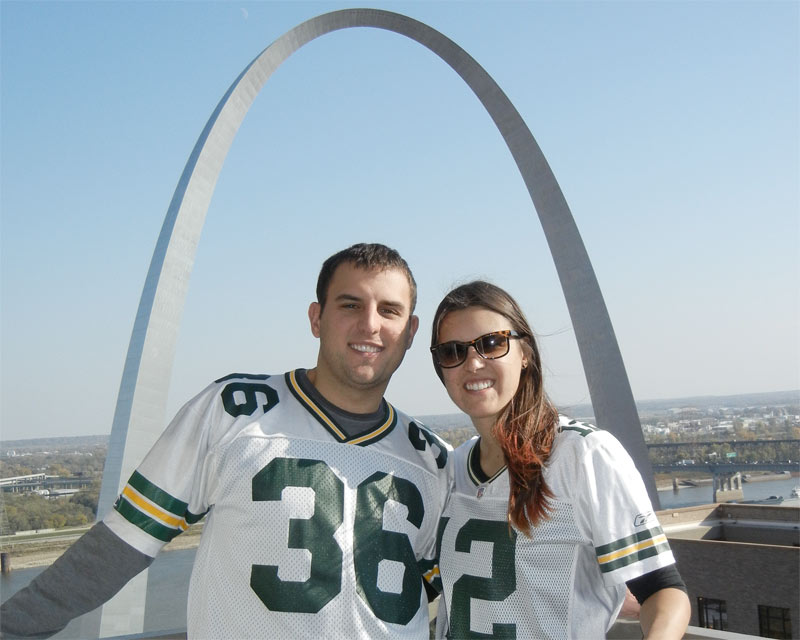 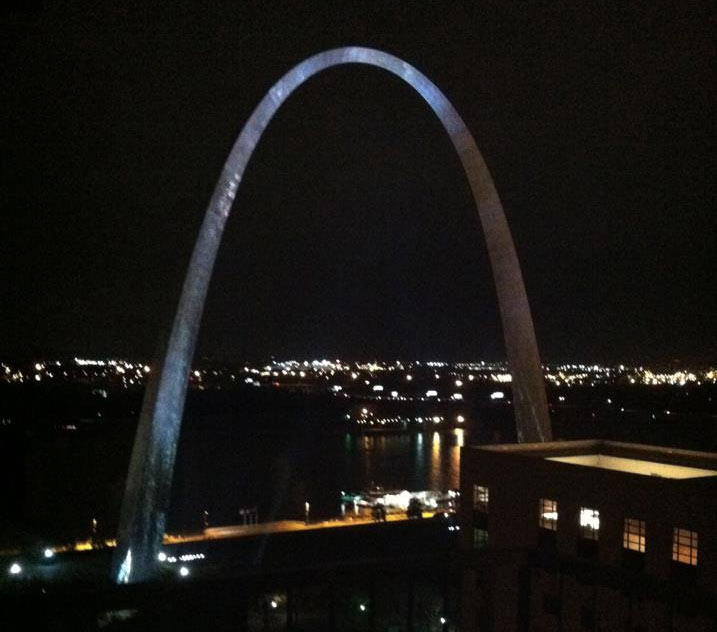 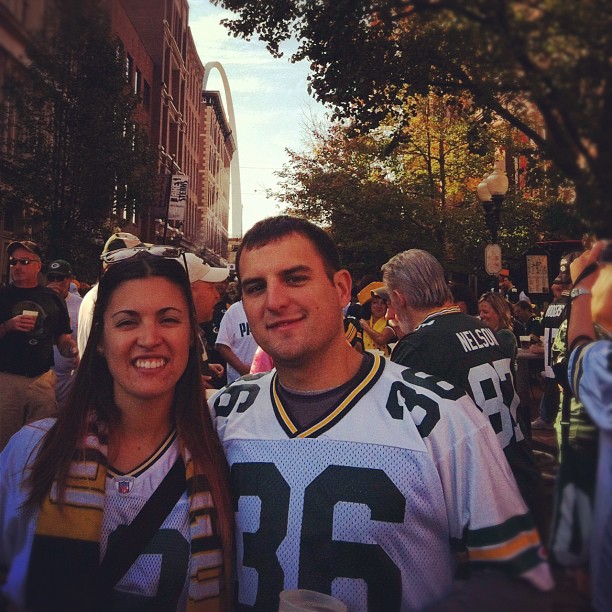 Published On October 22, 2012 | By This World Rocks | North America, Travel Journal, USA
Share this:
Dan and I are headed to the airport after a great weekend in St. Louis.  We came here for the Packers vs. Rams football game, and found some great food and entertainment in downtown.  Some highlights:

Friday
We couchsurfed with an ancestor of a famous German revolutionary.  Our host treated us to some history lessons, great St. Louis beer from Schlafy, and an awesome guest room – the entire basement with a private bath and big screen TV.

Saturday
In the morning, we headed downtown to eat a delicious brunch at Rooster (yes, it is a hipster as it sounds). The Metrolink train goes straight from the airport to downtown (the 8th and Pine station is closest to most hotels and activities).

As we left to look for a sports bar to watch the Wisconsin Badgers football game, we knew we were headed in the right direction when we saw a street full of Badger and Packer jerseys.  We found Over Under Sports bar on Washington and 10th street, and directed our friends there from the airport to join us.

After the game and several beers, we quickly checked into the Crowne Plaza hotel, then decided to continue drinking and checked out the Anheuser Busch brewery tour, home of Budweiser.  The tour was free, included all the actual brewing and production areas, and two beers at the end. To get there, we took a cab about 10 minutes from the Arch, which cost about $8.

We jumped in a cab again and directed it to Lumiere Casino, ready to keep the party going. Lumiere is walking distance from downtown, and inside is really nice, compared to what I was expecting based on most non-Vegas casinos I’ve been to.

Sunday
The four of us woke up early, donned our Packers jerseys, and headed out to find coffee and a pre-game party, expecting the usual stares and boos from the home team fans (we are experienced away-game fans).  But instead we found the streets flooded with Packer fans, since St. Louis is a relatively easy drive from Wisconsin.

We took some pictures at the arch like good tourists, then found the party we were looking for in the historic area of  Laclede’s Landing, a cobblestone street with bars and restaurants all hosting game-day parties.

After a great party and great game (Packers win, 30-20), we had some great pizza at Pi Pizzeria on Washington and 6th, and a low-key night (and took some pictures from our hotel balcony, and great view of the arch).

Today
So now, we are headed to the airport for the second time.  We got here this morning for our 9am flight, volunteered to take a 5pm flight instead for a Delta credit, and took the extra time in St. Louis to check out Forest Park and the Missouri History Museum. 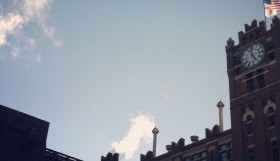