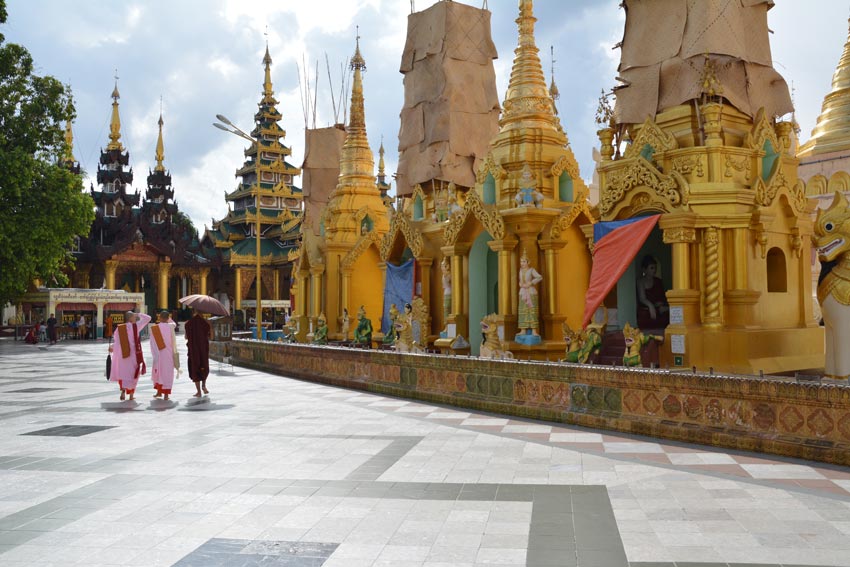 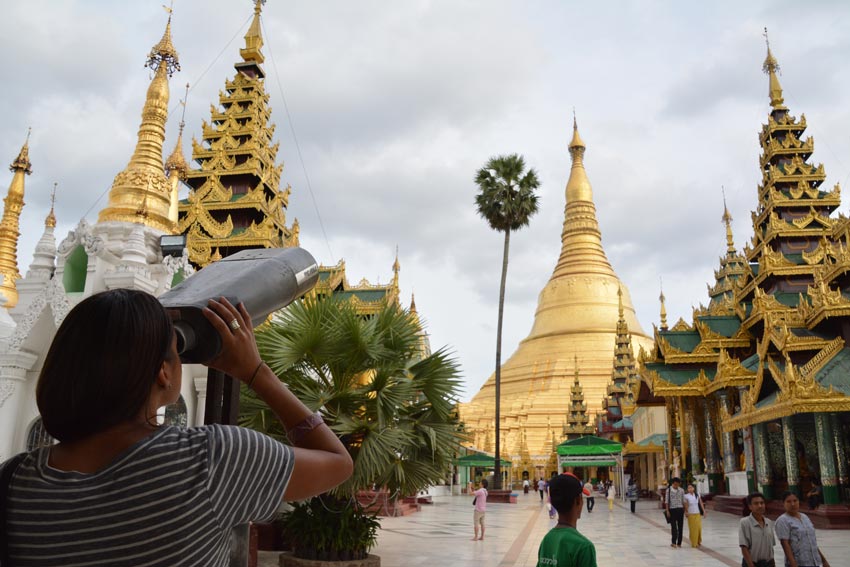 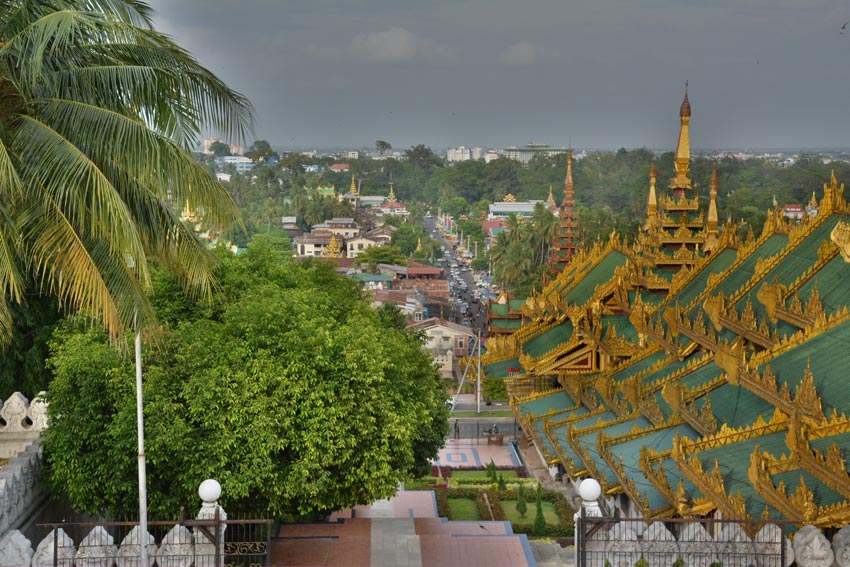 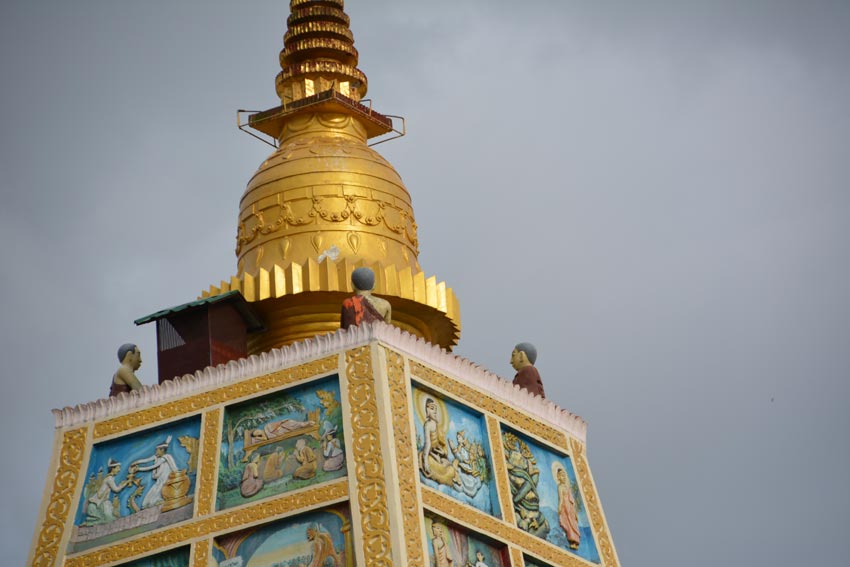 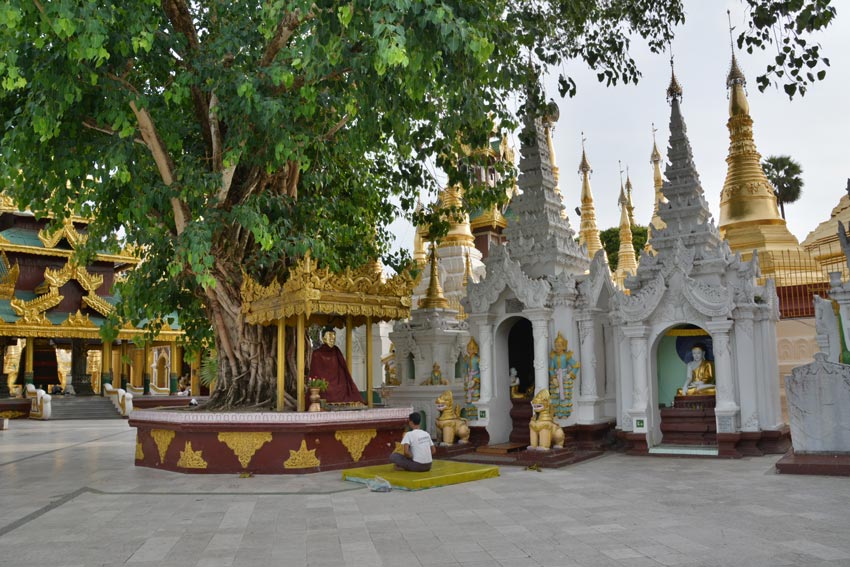 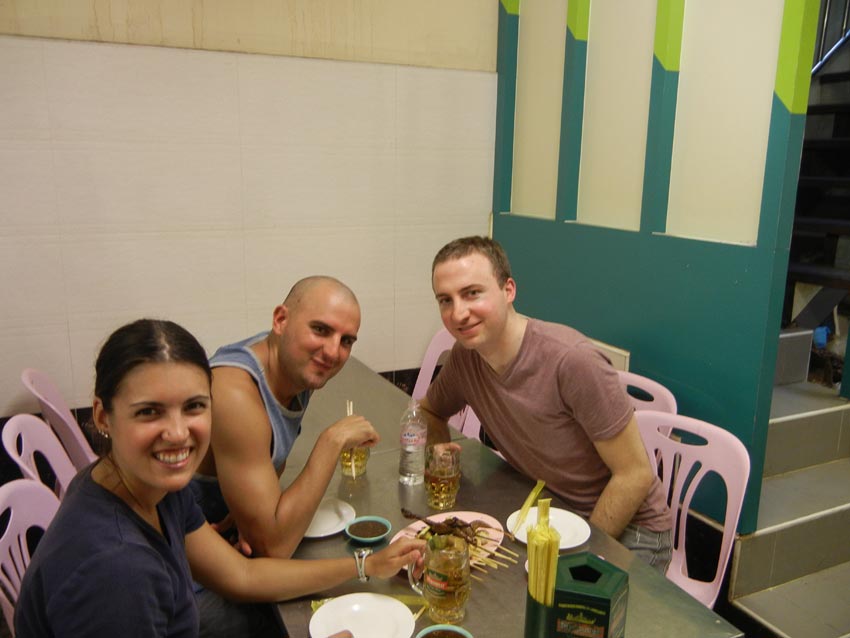 Living Up To Its Hype: Yangon and the Shwedagon Pagoda

Our expectations of our trip to Myanmar as a whole were high, but I admit my interest and expectations in Yangon were low.  We only have three days here in Myanmar’s biggest city, and the plan is to absorb as much of the Burmese culture as possible so that we are prepared for the next 20 days throughout Myanmar.  So far, Yangon has exceeded our expectations, especially the food, and our visit to the Shwedagon Pagoda lived up to its reputation as one of Myanmar’s must-visit attractions. 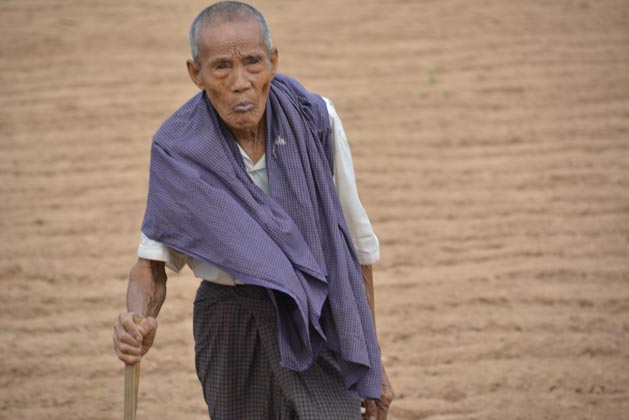 One of the best parts of just walking around town is seeing just how diverse this country is.  Unlike countries like Thailand and Indonesia, where the masses of people tend to blend together, everyone here seems to come from a different ethnic background.  In fact, there are over 130 different ethnic groups living in Myanmar!

Standing Out in the Crowd 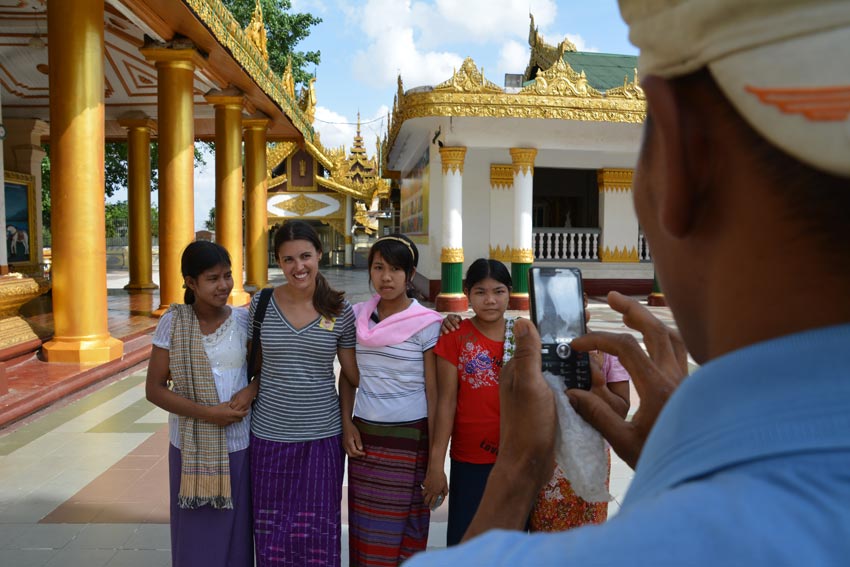 Although Myanmar has been open to tourism for a few years now, it seems that many locals are still getting used to Western travelers.  In three days, we have only ran into one other Western couple.  Even today as we get to the famous tourist site of the Shwedagon Pagoda, we are three of only a handful of tourists.  Already today, we have been asked to pose with locals for photos three times.   Something that reminds us that almost every local here has never left the country, and few outside the main cities have ever met a foreigner.  One specific group of girls is so over-joyed to take a picture with Alissa that they can barely stop screaming and giggling.  They do however manage to completely stop smiling for the usual Burmese non-smiling photo pose. 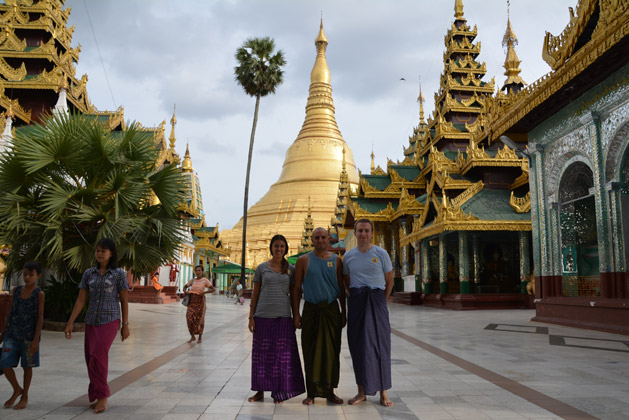 Located on a large hill, the most-visited attraction in Yangon is also the most beautiful.  Apparently the stair climb to the top is pretty cool, although we wouldn’t know since our taxi dropped us off at an elevator and we were not told we had an option.  After paying the $5 entrance fee, we begin making our way bare-foot around the 2,600-year-old complex.  It isn’t long until we are approached by an ‘unofficial’ guide who is eager to show us around for the next hour.  It is pretty apparent to us that we will most likely have to give him money at the end of the day, but we decide it will be worth it to have someone with knowledge of the pagoda give us a tour.

Our tour guide, Nye Nye, has brought us to one of eight planetary posts where we can make a water offering.  There are eight posts, one for each day of the week (Wednesday is split into AM and PM).  The idea is to find the post of the day of the week you were born on and pour a cup of water for every year you’ve been alive.  Nye Nye says people usually stop at 40, regardless of their age. 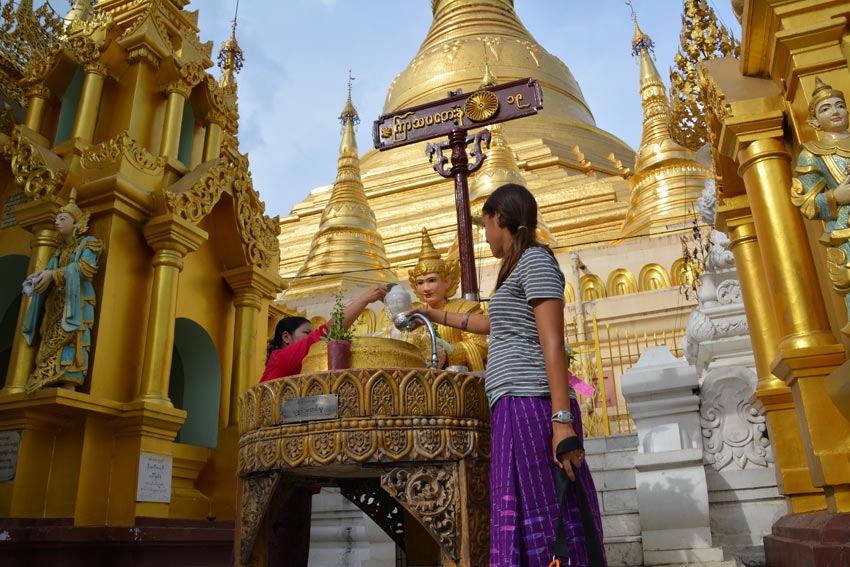 Some of these planetary posts serve more than one purpose.  For example, the Saturday post is also known as the Shrine of Fertility, where women from all over Myanmar come to pray for pregnancy and good health. 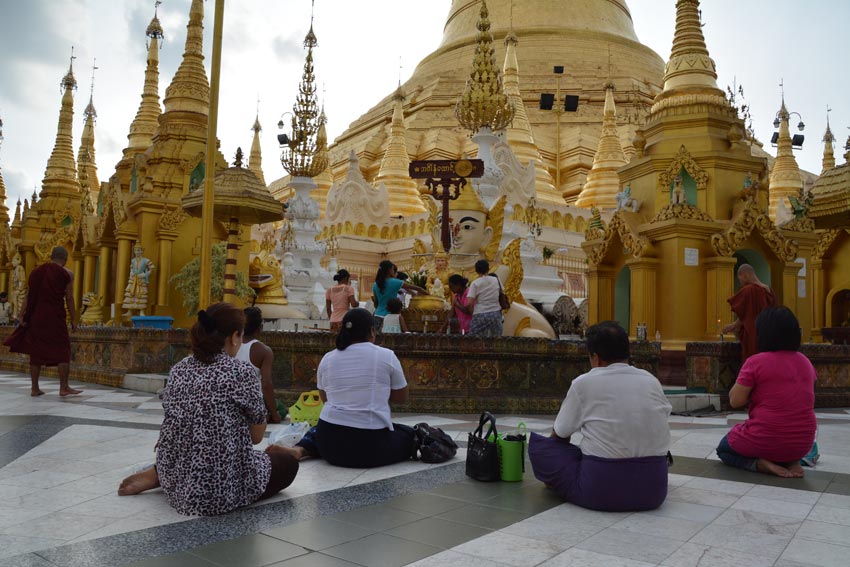 Women praying at the shrine of fertility.

The walk around the pagoda is much more interesting than I expected.  Every shrine and artifact seems to have a great story behind it.  My favorite is the Maha Gandha Bell.  In 1824, during the first Anglo-Burmese War, a British officer decided he would try and steal the bell and bring it to India.  The bell was too large and heavy, and the British ended up dropping the bell into the nearby river.  Rescue attempts proved unsuccessful, and the bell was abandoned.  The locals were then able to bring the bell back to the pagoda using thousands of laborers. 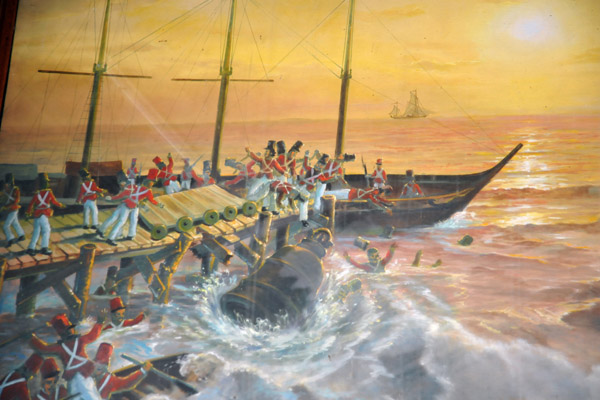 Painting on display in the Shwedagon Pagoda depicting the British attempting to steal the Maha Gandha Bell.

We had heard one of Yangon’s best dining experiences are the BBQ street stalls on 19th Street in Chinatown.  The three of us have headed there after our day at the pagoda to find out if this unique option will also live up to the hype.  There are small stalls selling pre-cooked meets on sticks as well as much larger stalls that have basket after basket of uncooked meat and vegetables.  We decide to share one basket, and it takes us about 15 minutes to decide what we all want to try.  We keep it pretty safe, but add some fish balls and a mystery bird just to top it off. 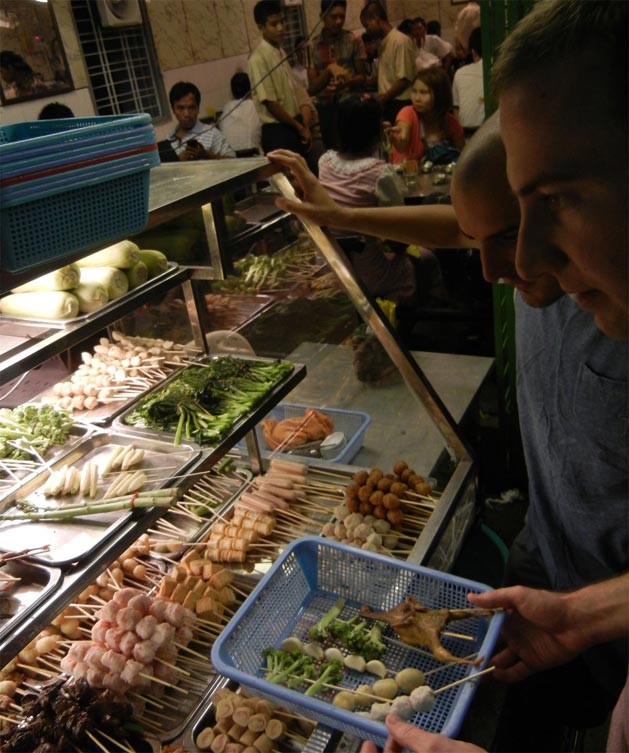 We are then led to a nearby table where our drink orders are taken.  Soon, our dinner arrives, cooked perfectly.  They even use local seasonings on all the vegetables.  We finish it all, and after all the food, and two beers each, our bill comes to a whopping $3 USD each.