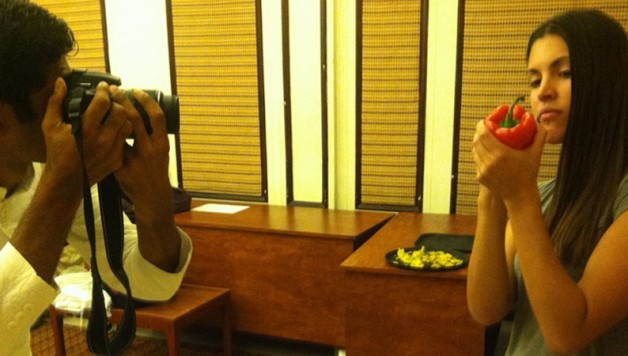 We Got a New Job: Vegetable Carving Models

Knowing we’ve seen enough of Chennai, yesterday we bought tickets for a movie at a nearby mall for today’s 4pm showing of the new Hunger Games movie.  We were craving a nice oasis away from India, and a Hollywood movie complete with popcorn would be a great way to feel at home leading up to the holidays. 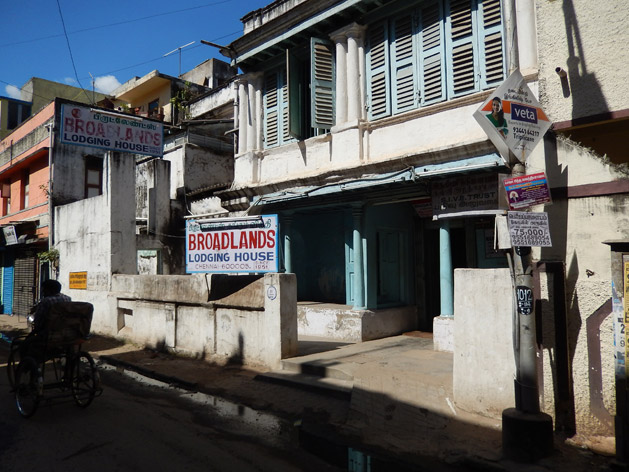 The road outside our hotel during a rare ‘calm’ moment.

However, we were greeted this morning by another offer.  A local guy showed up at our hotel and asked Alissa and I if we would be interested in modeling for a brochure he was making.  Initially skeptical, I began grilling him with questions.  What is it a brochure for?  How much are we getting paid?  How long will it take? etc. 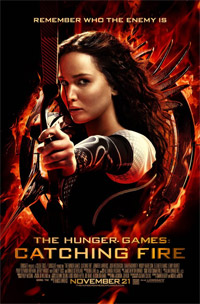 Turns out he runs a local cooking school and wanted some Westerners photos in his brochure (he never really says why, but I assume it’s to make it appear the school is more “international”.  The man’s name is Babu, and him and his side-kick have promised us 1,000 rupees (about $15 USD) each for two hours of our time, including a free lunch prepared by the students.  After talking it over, we agree, mostly out of curiosity as well as the fact that other than the movie, we have no plans today.

I tell Babu we will agree to do this, but we need him to drop us off at the movie theater before 4pm.  It’s currently 11am, and since he said this will take no longer than two hours, we both feel confident that this will work out just fine.  Our next issue is: what do we wear?  I ask Babu and he says to wear what we have on since they will be providing us chef coats.  He also doesn’t seem to care that I haven’t showered in two days or shaved in a week.  Alissa looks great as usual, but I look like I just woke up from a 36-hour nap.

So we hop in the car and Babu’s sidekick drives us to the cooking school, talking the whole way about the school and his many jobs.  We park in front of a narrow, cement building which had a sign that matched the pamphlet Babu had showed us, a good sign that we probably won’t be getting robbed or killed.  We are then led up the stairs to an office on the second floor.  Immediately upon sitting down, 15 or so students, all in white shirts and black vests, immediately begin setting the table and serving us biryani, an Indian rice dish with an onion yogurt sauce.  The food was delicious, as promised.   However, after we ate, things started taking a turn for the worse.  I asked where when we were going to take the pictures, since we were eager to get to the mall for our movie.  I was then told the pictures would be taken at a hotel 15 minutes away.  This was the first sign that things were not going to go smoothly. 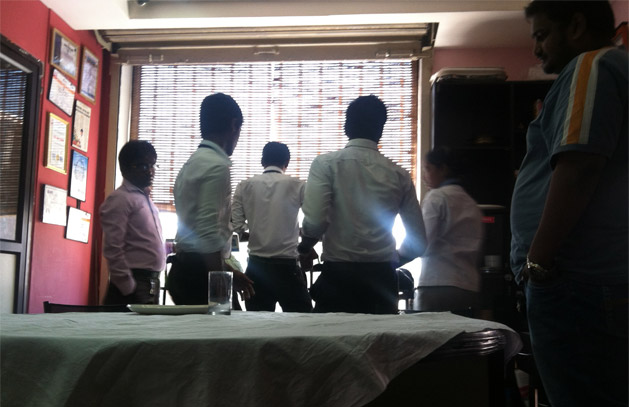 The student chefs preparing our meal.  Babu pictured on the right in retro Milwaukee Brewers colors.

After sitting around this office for another hour, we finally depart for the hotel around 2:30 (nearly two hours after we ate lunch).  At this point, I am really getting nervous about missing the movie because we still haven’t taken one picture.  I tell Babu that I don’t think he can get us to our movie by 4pm, and he just smiles and says don’t worry we will get you there.  It is actually funny to see, as he is shocked by the fact that I don’t think we will make it there.  He doesn’t seem to understand simple math that makes it pretty obvious we physically can’t move fast enough in this traffic to make it there by 4pm.  Alissa and I aren’t really upset about missing the movie, we just want him to admit we are going to miss it, which he won’t do.

After a 45-minute drive in terrible traffic, we finally arrive at the hotel.  Do we take the pictures right away?  Of course not.  We are seated in the lobby and told to wait.  Finally at 3:30, I ask Babu what the problem is, especially since the movie starts in 15 minutes, and we are about an hour away from the theater by car.  He finally admits that we will miss the movie.  He says he will get us tickets to a 7pm movie since he knows the manager at the theater.  This sounds like a good compromise to us, but we are still wondering why we are just sitting in the lobby and not taking pictures.  He tells us that the photographer is stuck in traffic and that he will be late.  He offers to buy us coffee in the lobby cafe, which we thought was very generous, and the coffee was surprisingly good.

The photographer finally arrives at 4pm (the time the movie is starting), and we are led upstairs to a banquet room where a table has been set up for us.  The table is set with silk clothes, and on top, a display of various gourds and pumpkins carved into the shape of flowers.  Yes, this cooking school specializing in vegetable carving, something I’m sure I was vaguely aware of, but have never given a thought as to the fact that people specialize in it as an art form.  So, they tell us to stand behind the table and pretend to carve the pumpkins.  This is when I, wearing my red Under- Armour shirt, ask where my chef coat is.  The photographer and chef have no idea what I’m talking about (go figure), and instead we are given aprons and hair nets to wear. 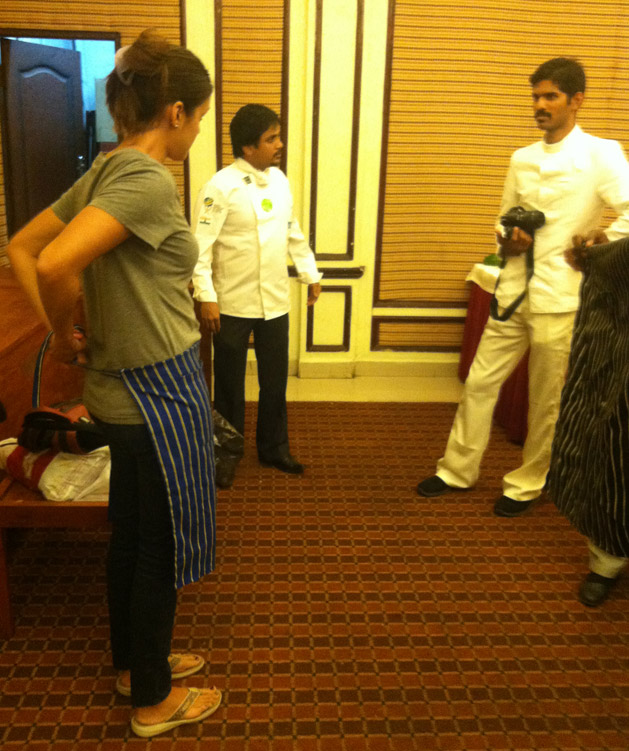 Getting ready for the big modeling gig.

We are then each handed pre-carved veggies and knives, and arranged in poses to show us carving with a thoughtful chef instructing us.  We try and smile as if we are exciting to be given this lesson in vegetable carving, but I am no model, and I am pretty sure I was terrible at this.  During one of Alissa’s solo shots, a commotion breaks out in the back and all the chefs and the photographer huddle together.  Minutes later, one of the girl students walks up to Alissa and asks if she can pin her t-shirt back.  Apparently there was too much showing…  In Alissa’s defense, she as only wearing a t-shirt, not some revealing outfit, but when you lean over to carve fruit… well sometimes the shirt hangs down a bit.  See below. Too revealing? You be the judge.

The whole thing was very amusing to us, which we tried very hard to suppress, but we were constantly breaking out in laughter.  The most difficult pose was this one that I captured on my phone from a different angle – a close up of Alissa and a zig-zag sliced bell pepper.  They then had her slowly open the pepper and he took pictures of Alissa with “amazement eyes” through the pepper.  How very artsy!  Poor Alissa too.  She had got a less-than-professional manicure in Goa a few weeks ago, and her nails were not something she was currently proud of.  The pictures are going to be close-ups of peeling and cracking blue nail polish. 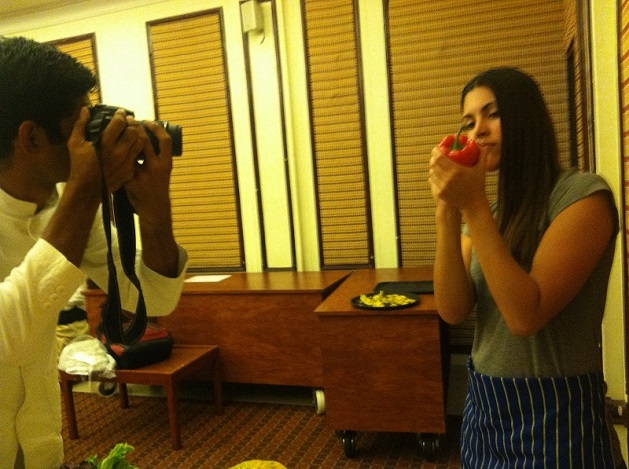 The funniest part about it, is that for each pose, the photograph would spend a few minutes arranging our veggies and hands, directing our facial expressions and mindsets – “you are very curious!” or “you are very happy!” – then would snap exactly one photo before changing poses.  Alissa’s dad would be appalled (he’s a professional photographer).  I’ve know him to take a hundred shots per minute of a duck swimming.  During the whole ‘shoot’, the photographer got maybe 8 shots total, which he reviewed on the camera’s screen after each one and determined it to be the exact shot he was looking for.

The chef and photographer both took our email address, so hopefully we’ll see some of the final shots, which we cannot wait to share.

After the veggie shots, we are taken to a restaurant within the hotel and seated at a table.  They want us to pretend to be guests for a hotel promo photo.  Somehow we have been pawned off to the hotel as models, with no additional pay I might add.  Maybe Alissa and I need to join the modeling union to avoid unpaid over-time like this.  It is impossible not to laugh when we’re sitting at this table.  Here we are, pretending to order food (we’re both starving by the way), and it has now been six hours since we left our room at the hotel for what should have been a “quick two hour photo shoot”.

After the photo shoot, we wait another hour for Babu to “say hello” to the general manager of the hotel in some back room.  During this waiting period, we begin being asked by the students to take pictures with them.  It starts with one bold guy who asks very politely to take a picture with us, but soon spins out of control.  We soon have a line of 8 or 9 students, all waiting to take a photo with us.  I feel like Santa Clause, hell there is even a Christmas tree in the lobby!

Finally, at 6:20, we leave the hotel, spend another hour in traffic, before finally being dropped off at the movie theater in time to be 10 minutes late to a different movie than the one we wanted to see.  But Babu apologized very politely, and then bought us popcorn as well as the replacement tickets to the movie.  So in the end, we still came out ahead, including our $30 modeling cash! (Though Alissa still really wants to see Hunger Games.)

2 Responses to We Got a New Job: Vegetable Carving Models