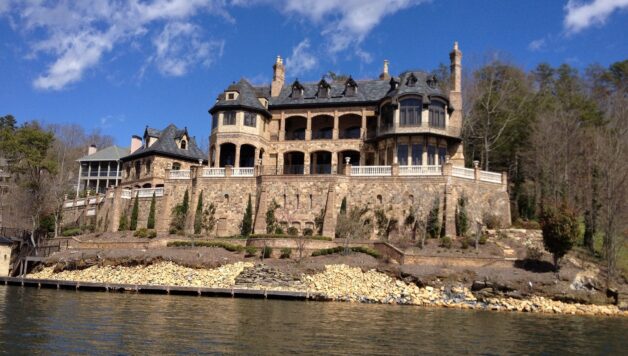 Where Should I Plan My Next Vacation? Places To Escape This Season In Western North Carolina.

The Land of the Sky region contains the highest mountains in the Eastern United States and some of the most iconic scenery. Many hidden gems are scattered around the High Country, where the air is cleaner, making the area perfect for a memorable escape.

This beautiful city in the Blue Ridge Mountains is famous for its architecture and vibrant arts scene. But the true jewel in Asheville’s crown is the 19th-century Biltmore Estate.

Biltmore is America’s biggest private home. Designed for George Vanderbilt and completed in 1895, this palatial building was designed to emulate the Renaissance chateaus and palaces he had visited across Europe.

Perhaps more importantly, Biltmore holds the vast collection of art the Vanderbilt family collected. Here you can view paintings by Renoir, Sargent, and Whistler as well as 16th-century Flemish tapestries. Because the home has always remained in the ownership of the Vanderbilt family, all the original furnishings and collections remain in situ.

Surprisingly, this amazing property is open to the public. You can enjoy a self-guided, 2-hour tour of the house or take specialized guided tours of the estate, the rooftop, and behind the scenes areas. This is probably as close to Downton Abbey as you will ever get this side of the Atlantic.

This quiet village in Rutherford County is the gateway into one of the most beautiful state parks in the nation. You will recognize many of the iconic landmarks found in Chimney Rock State Park from Hollywood films shot in the region. The park offers hiking trails suitable for all ages and skill levels from the gentle 0.6-mile Great Woodland Adventure Trail to the challenging 8.5-miles Weed Patch Mountain Trail.

The shorter trails, like the 0.15-mile Tunnel Trail, highlight natural features found in the park. The tunnel is a natural stone staircase covered by a giant granite slab. The more strenuous Weed Patch Mountain Trail links Chimney Rock State Park to Buffalo Creek Park and is suitable for both mountain biking and hiking. You can use this trail as a base for climbing Eagle Rock (with a permit) though you might need a GPS designed for hiking if you decide to wander off-trail.

One of the highlights of the park is Hickory Nut Falls, the spectacular 404-foot waterfall featured in the 1992 movie The Last of the Mohicans. Several scenic areas of the park were used for scenes toward the end of the film, but it’s the fight scene at waterfall many visitors recall.

Note that in spite of the subtropical highland climate of the Appalachian Mountains in North Carolina, the top of Chimney Rock itself and other high-altitude areas around the park will be truly cold during winter. Dress appropriately for your climb, including a suitable cold weather jacket.

If you like museums, you’ll love historic Hendersonville. When the town was founded in 1847, the main street was laid out by slaves owned by a local judge. Today, that same main street boasts a wealth of well-preserved buildings and a rich collection of museums.

The Henderson County Mineral and Lapidary Museum is a fascinating building where you can see a Tyrannosaurus skull, dinosaur eggs, and giant geodes. And your kids will adore Hands On!, an interactive children’s museum designed to entertain and educate young minds. And along with other museums, there are several important historic monuments and buildings, such as the marble angel statue that inspired Thomas Wolfe’s first novel, Look Homeward, Angel.

Have you ever watched the classic romantic film Dirty Dancing? If you’re a fan of the film, you’ll be impressed by Lake Lure. Many of the most iconic moments in the movie were filmed in and around this small town.

If you enjoy golf, you can play a round on the golf course where Baby’s father did. 7 miles north of Lake Lure is the Bald Mountain Golf Course, and key scenes in the film revolved around Hole 16. Lake Lure has also featured in several other Hollywood films and is noted for its small collection of historic houses, especially the Pine Gables cluster.

Wine lovers might be interested to know that vineyards have flourished in this region of North Carolina since the 1860s. And in the community of Mill Spring, you have the opportunity to tour a working vineyard. The Parker-Binns Vineyard. Their winery is open daily from noon until 6 pm, and the scenery is spectacular.

This is one of the oldest communities in the Land of the Sky, founded in 1787. Main Street is lined by well-preserved antebellum houses and is also where you’ll find the KidSenses Children’s Interactive Museum. This popular kids’ attraction boasts 20 exhibits over two floors.

Also in Rutherfordton is the Bechtler House. This was Christopher Bechtler’s home, a local entrepreneur who used gold from his gold mine to open a private mint and create his own gold coins. This remarkable German immigrant also made clocks, jewelry, rifles, and pistols. The house is full of fascinating exhibits, and you can visit the nearby gold mine entrance too.

This small town is famous as the place where the US Olympic Equestrian team trains. In 2018, the town hosted the FEI World Equestrian Games. But even if you’re not interested in horses, Tryon is a fantastic place to visit for the spectacular scenery.

The Tryon Pacolet Scenic Byway is a 10-mile stretch of the US 176 that affords amazing views of the Pacolet River and waterfalls. A short hike from the scenic byway, you can find the Pearson’s Falls Natural Heritage Site. As well as the waterfall, you can bike or hike along the trails surrounding the area or relax in the picnic area.

Image by Dorraine Saillor from Pixabay