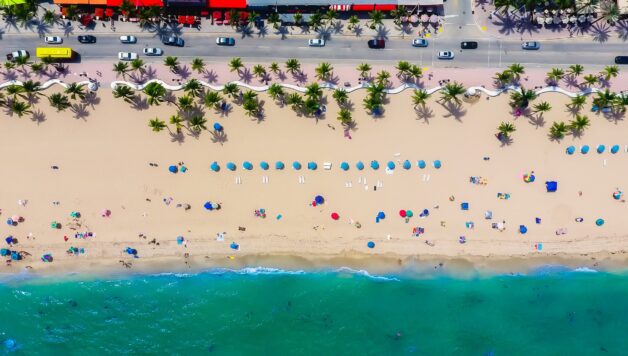 Published On October 25, 2019 | By Staff Writer | Travel Planning
Share this:

And so without further ado, let’s jump on in and take a look at just nine of the reasons why you should think about visiting Fort Lauderdale.

There’s a reason why Fort Lauderdale Beach is the city’s top rated attraction on TripAdvisor. It’s home to stunning sands and beautiful waters year round and while it does get busy at the height of the season, it doesn’t get so busy that you can’t enjoy it. It’s virtually a right of passage, so make sure you pack a towel.

Another good reason to visit Fort Lauderdale is that it makes a great base of operations for you to go and explore from. In particular, it’s worth paying a visit to Wynwood, which is just an hour’s drive away and which is known for its urban art scene, its galleries and the exciting events that make it such a popular hotspot for Florida’s creative types.

One of the most common reasons for people visiting Fort Lauderdale is the beautiful waterways and the water sports that are available. Whether you want to go fishing, surfing or sailing, you’ll be able to find plenty of companies out there to help you. Or if you want to take it a little easier, you could always go cruising from Fort Lauderdale instead.

You can pretty much tell what you’re in for from the name, here. Segways are super useful for getting around the city, and there are plenty of providers offering guided tours where you’ll tour the city as a group on the back of Segways. This is good news if you’ve never used one before because you’ll be surrounded by fellow newbies and being led by a seasoned guide.

“The 27 Club” is the name that’s used to describe the elite group of musical artists who all died at the age of 27, including Kurt Cobain, Janis Joplin, Amy Winehouse and Jimi Hendrix. The 27 Bar and Lounge pays tribute to these artists and is a great place to stop by for a drink or a bite to eat. They even provide board games for people to play and highlight works of art from local artists.

Fort Lauderdale has a great reputation for its food and drink, and while you’re there it’s worth spending some time taking a craft beer tour. Check out LauderAle, a small brewery offering a range of limited run beers that are brewed in and around Fort Lauderdale.

Billed as “Florida’s second biggest tourist attraction” after Disney World, the Fort Lauderdale Swap Shop is a cross between a drive-in movie theatre and a flea market. Over ten million people each year pay a visit to the Swap Shop, which is said to be both the largest drive-in and the largest daily flea market anywhere on the planet. You’ll have no trouble picking up a bargain!

If LGBTQIA+ tourism is more your thing, you’d be remiss if you didn’t check out Fort Lauderdale’s gay scene. The city has over 100 gay-owned/gay-friendly hotels and restaurants and also has a sizeable gay population and four gay beaches.

Fort Lauderdale is known for its art thanks to key institutions like the NSU Art Museum and the Fort Lauderdale Art Center. With over 6,000 pieces at just the one museum and plenty of others in the area for you to choose from, you’re more likely to run out of time than you are to run out of exhibits to see.

Now that you know just a few of the reasons why Fort Lauderdale is Florida’s underrated gem, it’s over to you to start planning an itinerary and booking in a few of your trips. That way, you can save some money and sleep a little more soundly at night because you know that a lot of those little details have been taken care of.

Fort Lauderdale truly is a stunning place in a beautiful part of the world, and with a bit of luck you’ll get to see it sooner rather than later. So what are you waiting for? Go ahead and start placing your deposits today. Happy travels!