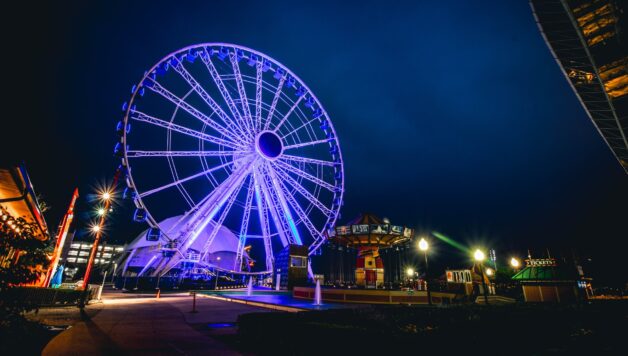 Chicago – Things to Do When You Visit Chi-Town

Chicago is one of the most famous cities in America. But why? After all, Chicago is similar in size to Milwaukee, but you don’t often hear of people packing their suitcases and jetting off to spend time in the home of the typewriter (to be fair, Milwaukee is also home to the world’s largest intact T-Rex skull, and there’s a statue of The Fonz by the river, so, you know, they got it goin’ on, if you like those kinds of things).

Ask anybody why Chicago is so famous and they might begin their answer with deep pan pizzas, the Chicago White Sox/Bulls/Bears, and Al Capone. All good answers. But today we’re going to look at what to actually do with your time in Chicago. With so much happening, this is a blink and you’ll miss it kind of place.

This brings us on to transport. You’ll need wheels. The city is simply too large to see by foot. There are many vehicle rental companies from which to choose a decent mode of transport for the day – but beware of the congestion and try to travel after/before the rush hours (and know who to speak to if you’re affected by a road accident with another vehicle of any shape or size – for example, see Chicago truck accident lawyer).

Now known as the Willis Tower (as of 2009), the tower was called the Sears Tower for 36 years and the name has kind of stuck, at least for this generation. It’s beyond big, and has frequently competed throughout its history for the titles of tallest building in the world and tallest building in the western hemisphere. It’s a 110-story skyscraper (that’s 1,450 ft or 442.1 m), visited by more than one million people per year. But why? What are they all coming for? Just to see the size? No. The answer is the observation deck, known as the Skydeck. For a nominal fee, tourists can visit the deck – the highest in the United States – and look down on Chicago from 414.4 m in the air. Don’t worry, you don’t have to take the stairs. There’s a 60 second lift that’ll zoom you to the top!

Fun at the pier

The Navy Pier is a 3,300 ft pier that sticks out into Lake Michigan. But in true Chicago style, this pier is something of a colossus. Spanning 50 acres (remember, a football field is 2 acres), you’ll be spoilt for choice between shops, gardens, family amusements and attractions. Two million people per year can’t be wrong!

Chicago is buzzing with people – a top tip when visiting any attraction is to book in advance where possible.

Photo by Jake Blucker on Unsplash